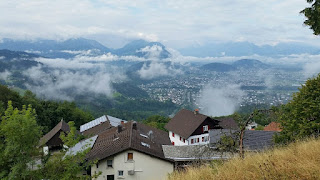 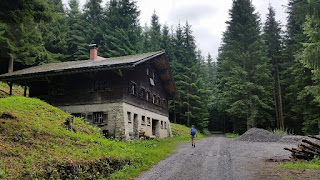 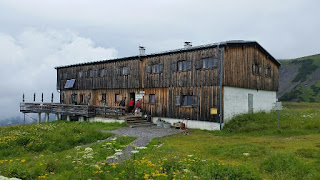 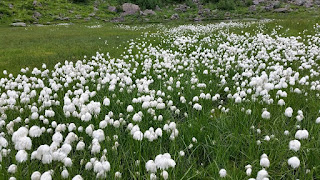 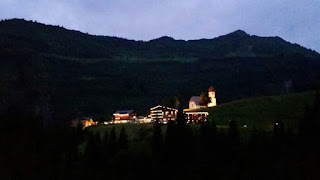 Sunday 22 July 2018 - incorporating the first part of Stage 2 of the Kalkalpen Traverse.

The forecast was for even heavier rain than in yesterday's forecast. Heavy overnight rain clearly wore out that prediction, as our waterproofs remained stashed all day. As did our sun tan cream.

Breakfast at 7.30 was a good idea. It enabled us to get going at 8.15 on what was always going to be a long day - even longer if like us you can't keep up with the 'standard times'.

Knowing that our route took us to around 2000 metres, it was a little disconcerting to start by dropping about 200 metres to a track at around 700 metres on the north bank of the river Frogisch. Willow-leaved gentains lined the path for a while, and some unusual helleborines also caught Sue's eye.

But once on that track it was an easy stroll all the way to Pobiswiesalpe, about 9km from Viktorsberg. For those wanting to go to Freschenhaus via the 2004 metre summit of Hoher Freschen there is a quicker alternative via a knife edge ridge that our overnight host was fretting about. He was relieved to learn of our alternative proposal. He omitted to discourage us with warnings of a brutally steep 600+ metre ascent from below Pobiswiesalpe. That ascent route seemed to be shared with cows. Luckily there were none on it today, but the overnight deluge had dissolved the surface into a slimy layer of mud. Our boots are still filthy.

This was another prime habitat for salamanders, and towards the top of the climb a couple of chamois rushed past us. In the first 12 km of today's walk we saw just two hikers and one mountain biker, none of them headed for this Langegg ascent.

At the top we turned left onto an easy path aided by boardwalks, up to Freschenhaus, which duly appeared through a cloud that had chosen to engulf us.

Given the weather outside, we decided to ignore our lunch boxes for the second day running. Soup in the hut got the vote, and excellent it was too. I chose the potato based Kartoffelcremesüppchen mit Gemüse, while Sue chose the barley and speck based Bäurliche Gerstensuppe mit Speck. That was all the sustenance we needed all day, apart from a bit of left over cake at the start of the morning's steep climb.

The weather cleared before we had finished our lunch. At this point we joined Stage 2 of the Kalkalpen Traverse as described by Alan Proctor. The afternoon was spent on largely deserted belvedere paths that led eventually to Damüls. A couple of chamois studied us at length before scooting down a precipitous slope in a remote spot.

The sky was overcast, sometimes threatening, but the rain held off and we gained some atmospheric views that reminded us somewhat of the Basque country.

The levelish path was a delight, maintaining a good height above the trees, past cow pastures with the sound of bells. The meadows were full of flowers - rattle, rampions, clovers, orchids, cotton grass, etc.

The well signed path to Damüls took us there for 5.45, a nine and a half hour day, long but satisfying. Google maps helped to locate the Alpinresort Damüls building, where we have a luxurious suite with a view up to the centre of the village and the mountains beyond from our balcony.

Had the supermarket been open we'd have sourced dinner from there, as we have a fully equipped kitchen here. As it was we saunad  and showered then crossed the road to a convenient restaurant, at Berghotel Madlener. We had plenty time so didn't worry about a lengthy wait for our food. They had forgotten our order. That meant more rehydration fluid, this time 'on the house', and the food was excellent when it arrived.

Sorry about the last image, it shows up much better on the phone.

Forecast for this week ‚Blitze und Hitze‘ - typical mountain weather for this time of year. How is your German coming on? Curious to see where you end up...