'Summer in the Alps' - Day 51 - Barbizon to Montreuil-sur-Mer 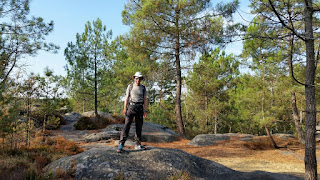 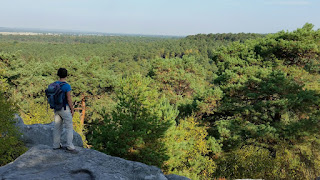 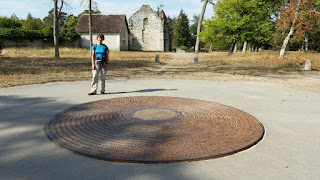 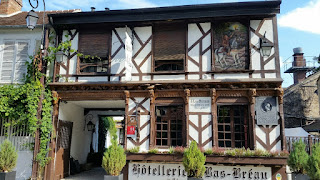 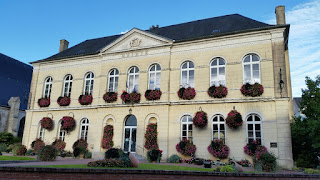 Presented with yet another sunny day we tucked in to the lavish breakfast provided by Chambre d'Hôte Petit Angelus. No more food was needed until supper time.

On our host's recommendation we drove a little way back down the road and parked near a visitor centre, from where a 5 km walk called the Promenade des Gorges de Franchard provided a typical example of walks in the Fontainebleau Forest. We followed some blue waymarks through the silent forest to a viewpoint. Sadly the Alps were just a little beyond the horizon.

Occasionally we misplaced the waymarks and had to backtrack. This was perhaps due to the distraction of other marks on some of the rocks. Fontainebleau Forest ranks highly on European climbing maps, being a first rate venue for bouldering. It has its own grading system. Sue whizzed up an 'orange' whilst I completely flunked a 'yellow'.

The place was deserted, or so we thought until we got mixed up briefly with a coach load of French pensioners.

After a while we found ourselves back on the sun scorched earth by a ruined hermitage near the visitor centre. Here there is a large plaque on the ground commemorating 'UICN 1948 to 1998', being 'Union International for the Conservation of Nature'.

Returning to Barbizon, we took a stroll down the high street before enjoying a coffee at one of the village's many hostelries. Barbizon seemed to us to be France's version of Broadway, for those familiar with that Cotswold village. There's a fête here on Sunday - the place will be bursting.

The afternoon was spent travelling about 200 miles to Montreuil-sur-Mer.  We've managed to get through France from Geneva without using any toll roads. That's made for a pleasantly scenic journey and in theory has saved us a few euros. But that doesn't take account of the speed cameras that have flashed us when doing 31 kph in a 30 kph speed limit zone. The penalty is €135. We might have a few of those! Luckily, I'm not having to pay for any root canal treatment this month.

Our 'road trips' to Europe often use Montreuil-sur-Mer as a springboard to the Channel Tunnel, less than 50 miles away. So it's easy to get home in a day from here. We passed through on days 30/31 of this very trip. Tonight we are staying in the old Tannery (La Tannerie de Montreuil). This is outside the city wall that was built in 1567, but is actually part of the earlier city wall built in the 13th century to protect the seaport, as it was then. The town has a colourful history, and we always enjoy the 3 km 'Promenade of the Ramparts' walk. Today that took place after dinner, which comprised a number of tasty, locally sourced, items. Except the smoked salmon - that was Scottish. Luckily our room comes fully equipped with kitchen (hidden in a wardrobe!) and dining facilities.

Stats:
We walked about 5 km in Fontainebleau Forest, and a further 5 km around Barbizon and Montreuil-sur-Mer