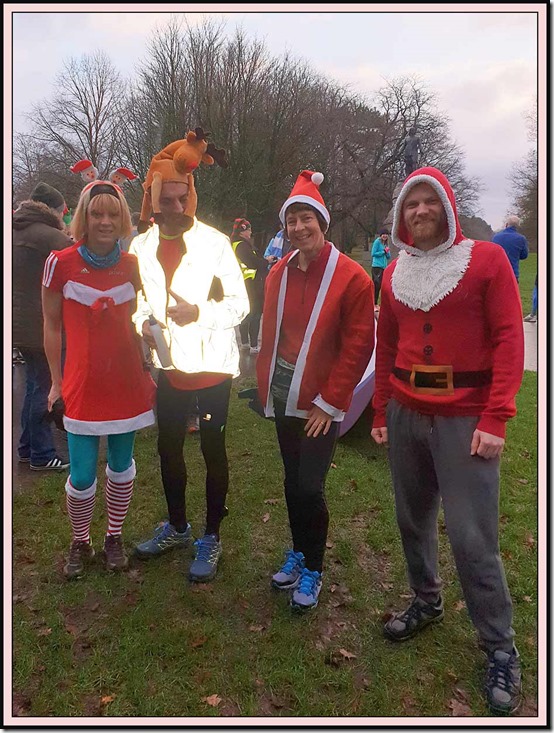 It was a good turn out of 278 for the Christmas parkrun at Wythenshawe, on a rainy day. But the rain just about held off until after the event. Having said that, the course was muddy.

My phone has an app that detects a range of prohibited chemicals. Thus Owen was caught out by this new technology that detected that his jacket was laden with such chemicals. Luckily the run director didn’t spot this.

There were lots of dodgy characters around, including a rare appearance from ‘Nobby No Show’, one of Owen’s suppliers. It’s amazing that his own jacket passed the test. He’s taken precautions. Note the photo bomber, and a man in the background with a carrot up his nose. Strange people, these parkrunners! 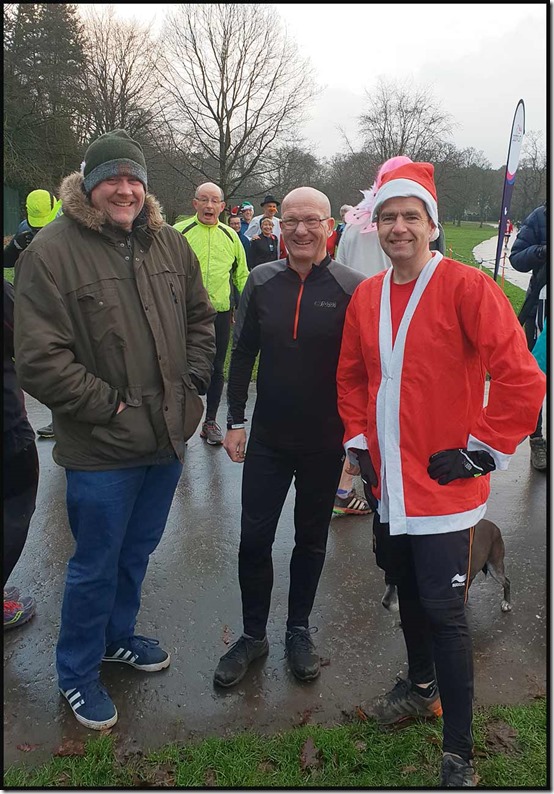 The Cordingley clan arrived in force, and, in the case of The Godfather (who probably supplies ‘No Show’), in disguise. 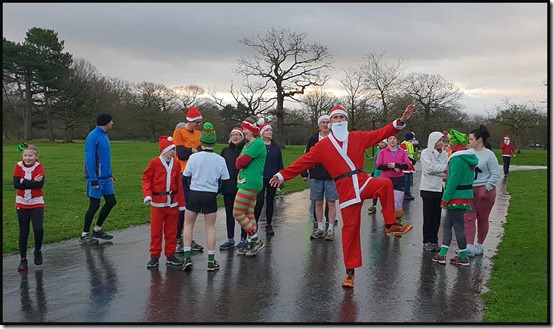 This is Wythenshawe parkrun’s ‘Royal (or should that be Royle?) Family’. Numbers would plummet without them. Here, a few members of the family have been infiltrated by ‘Fast Michael’. 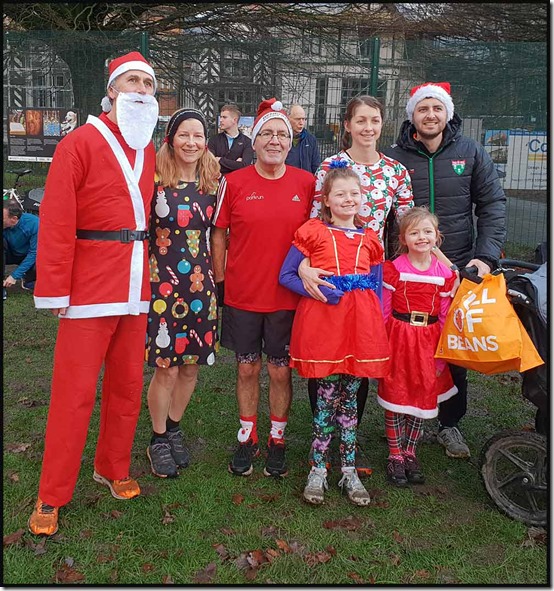 The following three gentlemen arrived in disguise. The well lit tree has leggings that after a while impede the runner’s progress as the soggy bottoms get stuck under the shoes, making forward movement tiresome. The elf in the middle was hampered by the umbrella in his pocket, and on the right is an impersonator of a Royal Family member who is in turn impersonating a topical character. 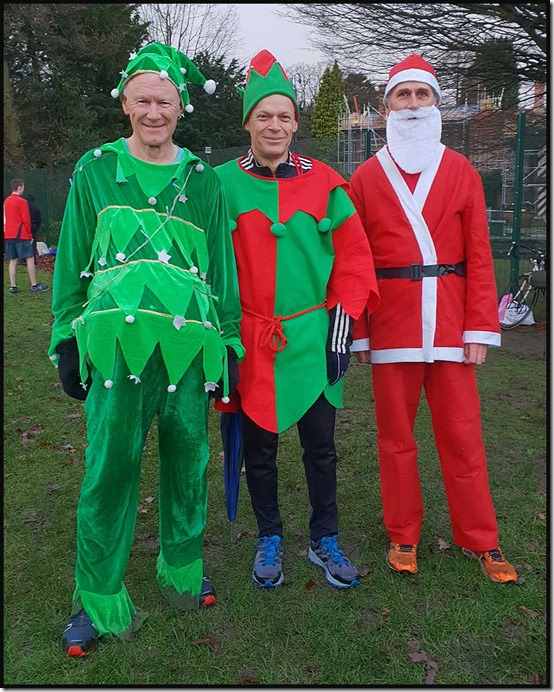 After many announcements, run director Dan got the show on the road. The tree managed to lead the field into the first corner (much cheering). It gradually slowed down after that, and was overtaken by 85 less encumbered participants. But not by its sapling, which finished as an unknown runner in 97th position, having forgotten its barcode.

Owen finished a bit later, chased in by Annie, whose pretence at being a tree was arguably questionable. 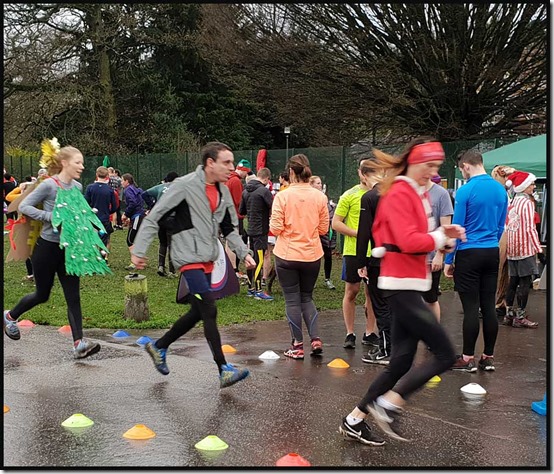 Here’s the finishing funnel, staffed most efficiently by Strict Syd and his team of drug testers, one of whom is giving Owen a full scan before despatching him to the Courtyard Dungeon. There are several other familiar faces in this picture. 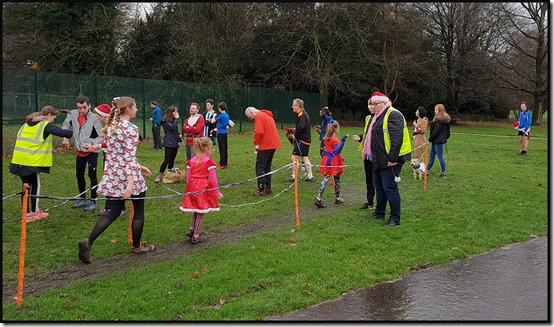 Sue strolled home in around 37 minutes, in 246th position, complaining about having to walk due to a damaged muscle. 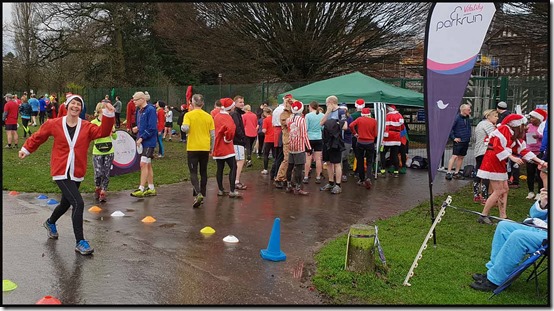 The Courtyard Tearoom provided bacon and sausage butties and hot drinks, superbly organised by Kate H, whose dynasty as Royalty of Wythenshawe is surpassed by the Cordingleys only on grounds of the sheer numbers of the latter.

Here, Sue has been joined by Jeanette (injured), Sapling (‘male member of the year at his local gym’), and Sarah – too ill to run but hungry enough to come for a bacon buttie.

Loads of people were catered for, and the large café was pretty full for a while – a very jolly occasion with much camaraderie. 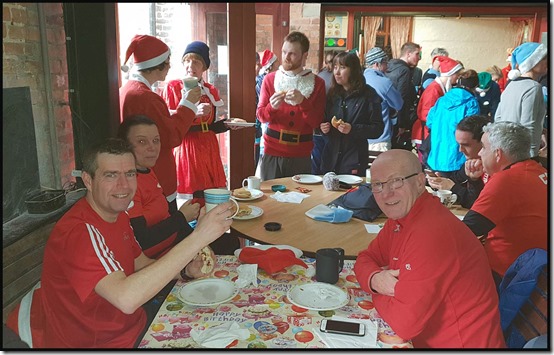 Meanwhile, Dan could only find a wifi signal in the rain outside. So the results were processed by an elf, a fairy and a setter dog team, all of whom were slowly getting wetter and colder. They and the other run directors and volunteers are the people who make this popular event happen, and we should all be exceedingly grateful for their unstinting efforts. Thanks in particular to Andy H (The Fairy), who despite his encumbrances finished in the top 20 today. Not that it’s a race, of course. 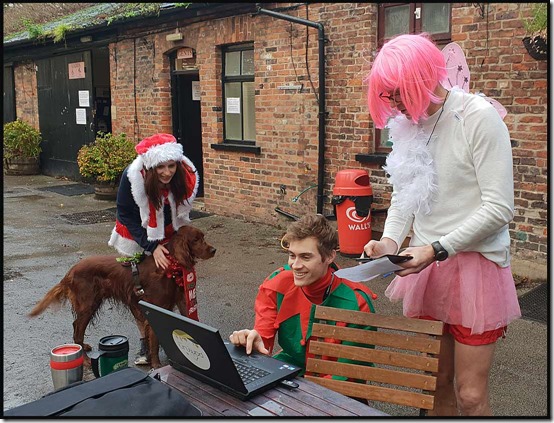 To quote Jan (pictured far left in the penultimate picture), “We are lucky to have such a great community on a Saturday, it brings all sorts of people together. I can't imagine Saturday mornings without parkrun anymore.”

Many a tear can be shed, just by reading parkrun stories from across the globe.

That looks like a really fun day. What position did the red setter come in at (se last photo?) Looks as though he/she's being congratulated.

Best wishes to you and yours.

Amanda and Toby the dog finished in 79th position, Conrad, just ahead of the tree, that caused Toby a moment of hesitation as he jogged past on the second lap.
Full results are here:
http://www.parkrun.org.uk/wythenshawe/results/weeklyresults/?runSeqNumber=370