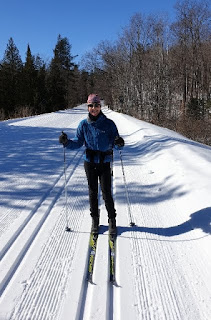 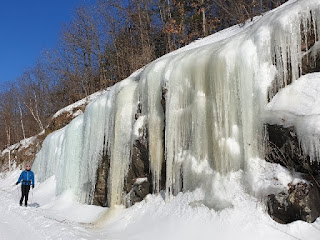 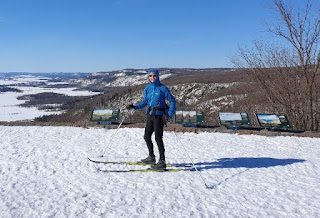 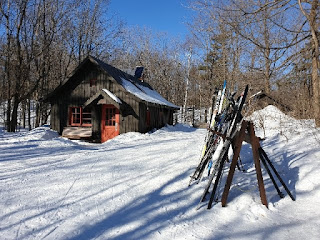 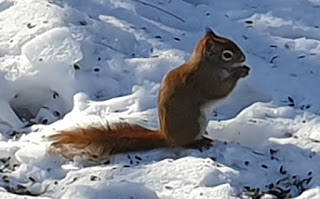 With Ken and Helen otherwise engaged, Sue and I headed off in Ken's Impreza to P8 (Chelsea) on another brilliantly sunny day.
The Parkway tracks are easy, with long ascents and descents. Good for a workout. But with no race to train for this year, we took this classic circuit relatively easily today.
The ice curtains on Champlain Parkway (second and third pictures) were as impressive as ever, and the view at Champlain Lookout (fourth picture) was as clear as we've seen it.
The lunch time rush at Huron cabin was over by the time we got there after 1.30pm. This cabin was purpose built on the site of an old homestead at the time the Parkway roads in Gatineau Park were built as a 'make work' project back in the 1940s.
A lone red squirrel was feasting on the debris from Downy Woodpeckers and Chickadees on the bird feeder.
It was a chilly but fast descent to trail 32, which links Fortune Parkway with Gatineau Parkway, then an enjoyable slide on the struggling remnants of our blue wax for the final few km back to P8.
Today's route:
P8 > Gatineau Parkway > Champlain Parkway > Champlain Lookout > #1 (Ridge Road) > Huron cabin (lunch) > #1 > Khyber Pass > Gossips Corner > Fortune Parkway > #32 > Gatineau Parkway > P8. 25.4km.
Another excellent outing in great conditions.
Posted by Phreerunner at 01:42