Snowshoes on The Wolf Trail 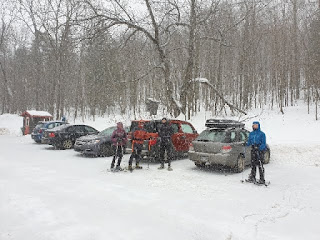 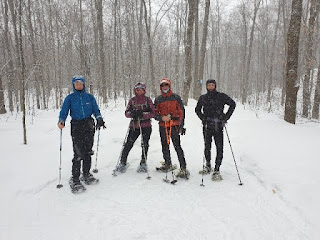 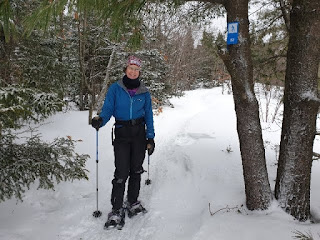 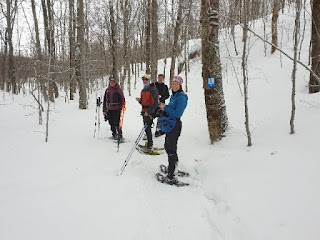 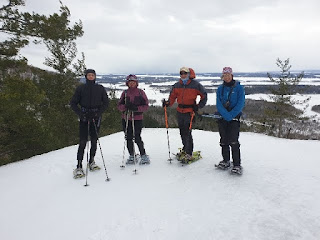 We've brought our snowshoes so we may as well use them!
Susan and Roy planned this excursion, and Sue, Ken and I decided to tag along for a pleasant morning, mainly in the woodland of Gatineau Park.
The #62 trail is about 8.5km in length, starting from P13 at the very end of Meech Lake. It rises about 300 metres from the lake, generating good views from the vicinity of Ridge Road (#1) over the frozen expanses of the Ottawa River.
Beyond the high point of the walk is a short 'there and back' to a viewpoint. Today that was frozen over in the form of an ice cap surrounded by precipices.  Just as well that our snowshoes are equipped with on-board crampons.
Today's pictures are shown in the order they were taken, starting with the car park in a snow storm and culminating with my four companions on the frozen ice cap.
It was quite warm, just below freezing, today and skiing conditions wouldn't have matched yesterday's superlatives. So snow shoeing was a good option. Our two and a half hour walk finished at 1pm, when we adjourned to Palmier café in Chelsea for a well earned lunch.
We'd not been to P13 before, as there are no ski trails that start from there, so it was new ground at the end of a rough road. The Wolf Trail used to be a ski trail - Ken has skied it in the past - but the authorities now seem it to be too difficult for skiers, though it's easy on snow shoes. Indeed, there were a few runners out today, managing fine with trail shoes and yaktrak crampons. Thanks to snowshoers like us, the track was well compacted.
Posted by Phreerunner at 20:24