My regular Monday morning bike ride was shorter than usual due to uncertain weather and an assortment of commitments. Richard joined me at Timperley Bridge for today’s 37 km figure of eight route that took two and a half hours at a gentle pace.

The above picture was the only one I took, as we finished up spending most of the time in an unpredicted shower of rain. The photo was taken from Coronet Way (SJ 790 981), looking towards Centenary Bridge. What you don’t notice from the picture is the pair of Oyster Catchers on the small wharf in the foreground, and the Lesser Black-backed Gull perched beside them. The latter perhaps waiting for a tasty Oyster Catcher's egg!

I quite often do this ride for a bit of exercise, usually returning directly along the towpath from Stretford, rather than taking the Trans Pennine Trail past Carrington Moss to the Bay Malton, the route we took today.

There are currently lots of signs beside the Carrington Moss paths, inviting protests to a plan for 10,000 homes to be built in that area.

Here’s the route we took – 37 km with minimal ascent. 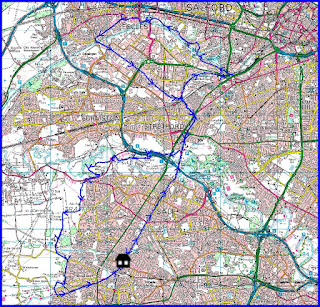 Best of luck protestng those 10,000! homes.
My village has been completely submerged with a couple of thousand new homes with no obvious planning directive.
Time for us to move up to Scotland and have a new independence vote.

Good luck with that!