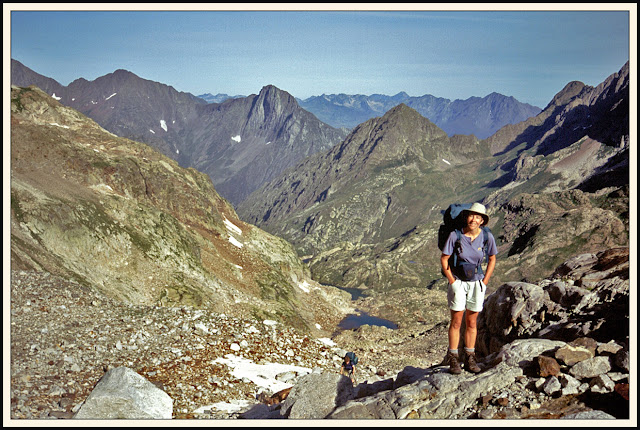 Excellent alpine day with glacier, boulders and 2000m descent – 11.25 hours, 18 km, 800m ascent
As our camp was already up at 2400 metres, there wasn’t too much height to gain but the ground was either boulders, steep scree or glacier.  Good plod up hard snow in early sunshine.  Super views of surrounding mountains.  Rose to another col before descending for a sunny lunch near Refuge du Portillon. During the afternoon the path dropped relentlessly into a green, lake-filled valley with waterfalls, a lovely contrast to the morning’s alpine scenery.  Julie hitched the last 4 km whilst we used a path to reach the .  As the campsite no longer existed, it was a hotel for the night, and a welcome shower.  A long day, but a good one, and some well-deserved beers in the evening. 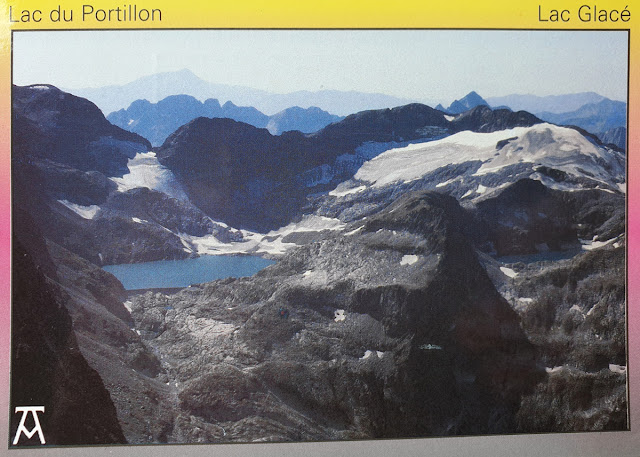 Diary Entry (by Sue)
A magnificent, if long, day in alpine landscapes with beautiful weather. It was a cool, but clear morning at our green (from glacier melt) lake, and we were away at 8.15 am, on a rocky path to Lac du Milieu.
It became more bouldery, then climbed steeply up a scree slope. From the top, our objective was visible - the des Gourgs Blancs, at the top of a glacier. The glacier wasn't steep, but as it was early, the snow was quite hard. It was a long plod up, reaching the col at 10.15 am (2877 metres), where we lingered only long enough for a photo, as the wind was cold. 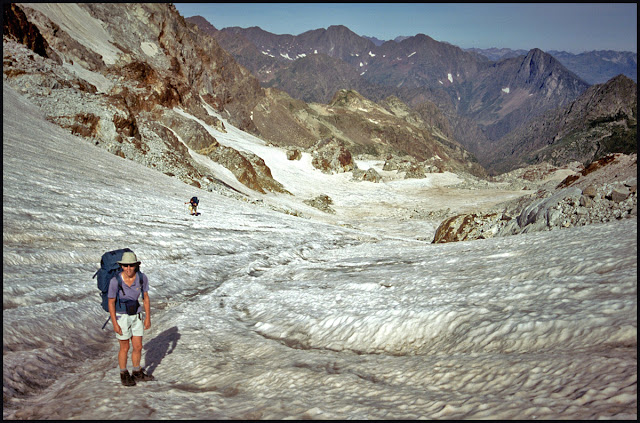 Col des Gourgs-Blanc
The steep rocky descent, we stopped for a mountain mix / chocolate break, trying to work out which way to go to the next col. Now, there were quite a few folk around, some with ice axes for the snowfields. From here, the view is rock and snow.
Col du Pluviomètre was easy to aim for, as the large rain gauge stood out well. We took Georges Véron's advice and went up the rock spur to the south. More snow, boulders and rock, and it was reached at 11.30. Excellent views from here, back to Pic Goudon and Pic des Spijeoles, right off the first col, down to Lac Glacé and Lac du Portillon, and across to Pic de Perdiguère. 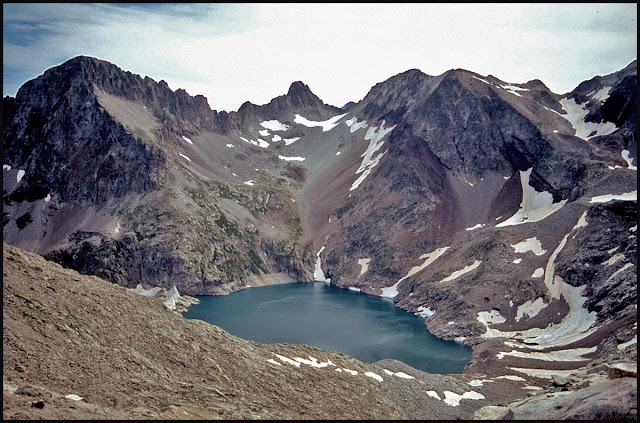 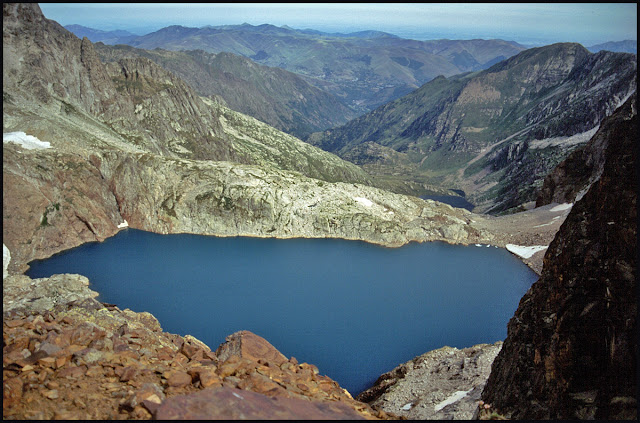 Lac Glace
The descent to Lac du Portillon was hard going, on boulders following , in parts contouring around the hillside. A nice lunch stop just above the Refuge du Portillon, the three day old bread being quite acceptable. 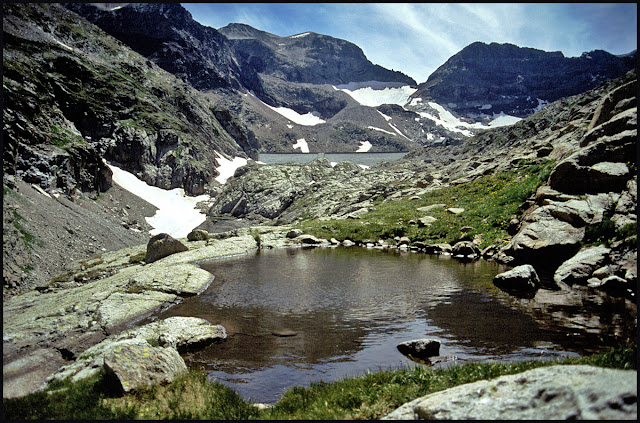 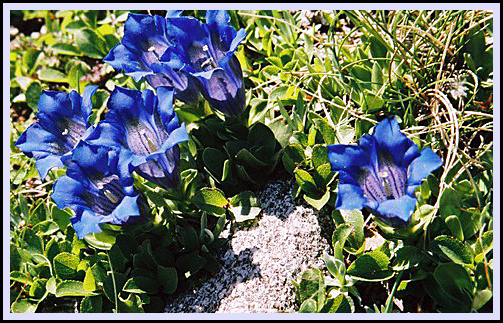 Trumpet Gentians
Here, we leave the HRP, for a resupply in Luchon, so it is the start of a huge descent for the afternoon. The path improves, the air warms, and a view of a green valley with three lakes emerges, after the starkness of the morning's terrain. The path was wide, well constructed and busy. It descended gradually to Lac d'Espingo, an area with sheep grazing and people admiring beautiful views. 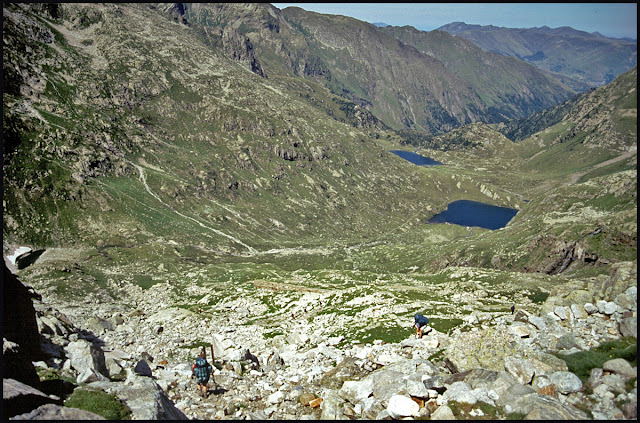 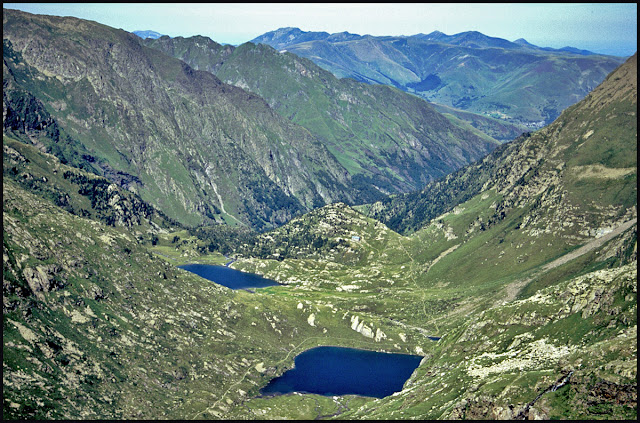 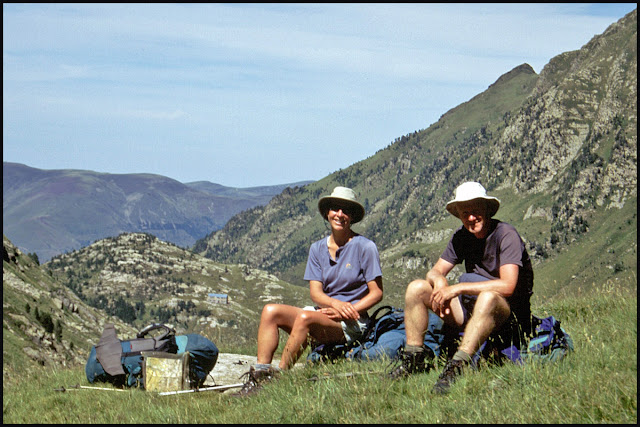 Taking a break near Lac d'Espingo 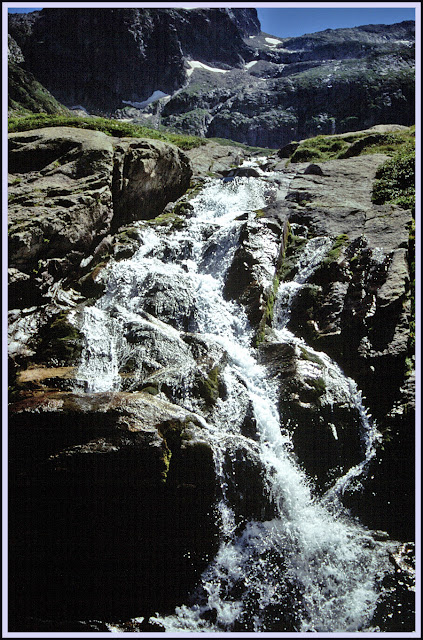 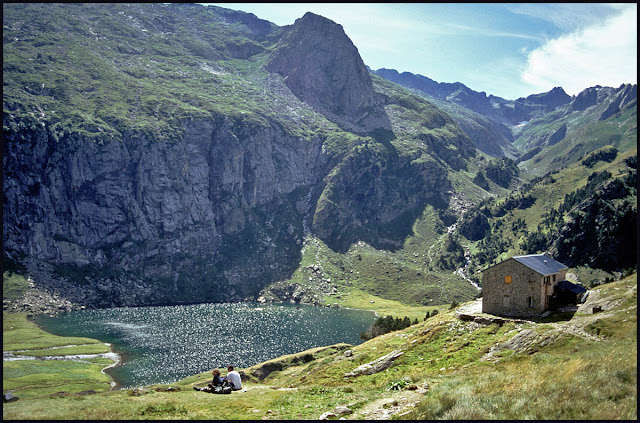 Refuge d'Espingo
From here, a steeper descent plus the aid of zigzags through trees to the lovely Lac d'Oô ', a large lake with precipitous walls, and a long waterfall cascading into it. The Auberge supplied cokes, and we waited for Julie, whose knees were suffering from the long descent. 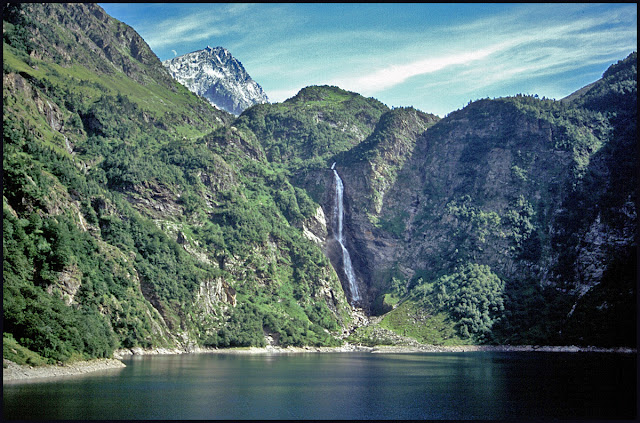 Lac d'Oô
Unfortunately, on leaving there at 5.30, we still had a few miles to go to reach the , where Martin's (old) map showed a campsite, but Julie's (newer) map didn't. The path widened to a track, and there was soft green evening light on the hills. 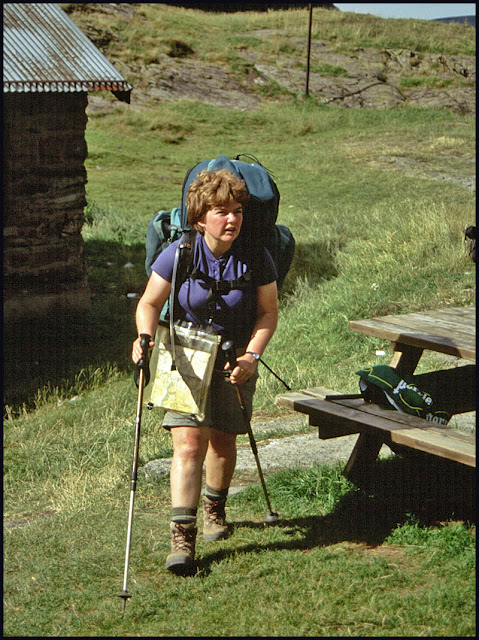 Julie outside the auberge at Lac d'Oô
At the car park, Julie stopped to hitch. We ate some mountain mix to fend off the hypoglyccaemia both had felt, then continued on a gently descending path/track.
Oô was lovely - old cottages, a boules area, river running through, and whilst we were taking all this in, a car tooted its horn - it was Julie in the back of the hotel owner's car. She had successfully got a lift from the second or third car past, but the campsite no longer existed when she got to Oô. So we were all booked into the Hotel Spigeoles, a family-run place. The hotel owner had spotted us marching past, and had gone to ask Julie if it was us. The lift was offered when Julie panicked as she had no shoes on! 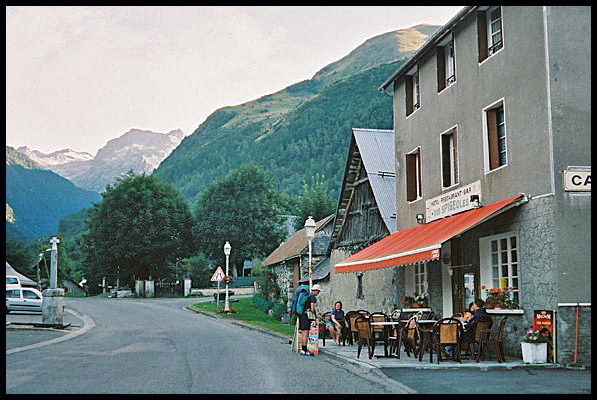 Hotel Spigeoles
By now it was 7.15 pm, and we were ecstatic. There was even a double bed! In no time, we were all showered and downstairs in the dining-room enjoying a cold beer. The set dinner was cold meat and salad, then lamb with lots of potatoes, then cheese and ice cream. It was a well earned one. The sky was still clear, as it had been all day, when we turned in after 10:30.
Stats and route (Viewranger):
21 km, 1700 metres ascent, 9.5 hours 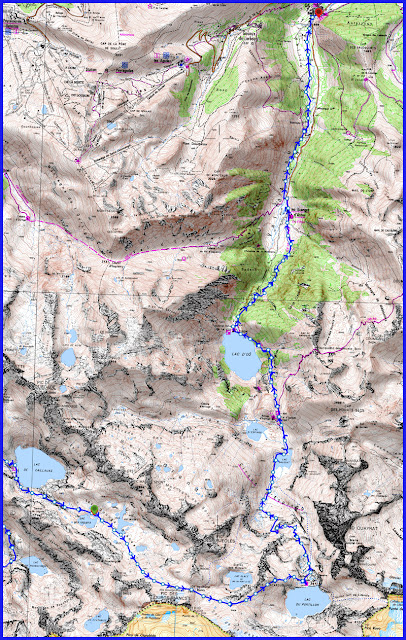 Next Posting
Previous Posting
Index
Posted by Phreerunner at 22:19