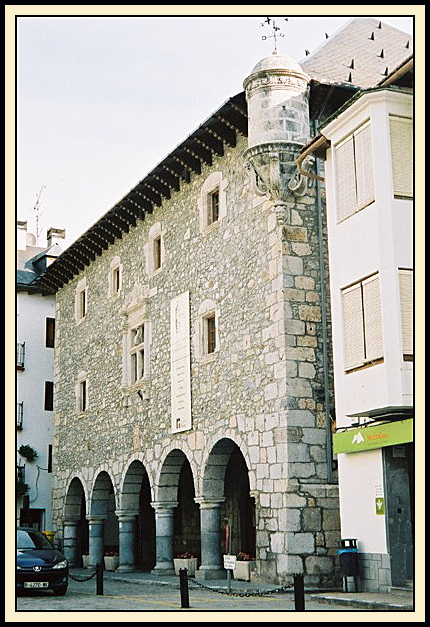 
Lovely weather for a walk in Spain south of GR11 – 9.5 hours, 18 km, 1500m ascent
A pleasant stay in the hostel at Bielsa, but the mountains called, and it was a sunny day.  Ate raspberries and strawberries during an extremely steep climb, but eventually reached a level path with excellent views of Monte Perdido.  Glad to see the campsite, which provided a welcome cheap beer when we arrived at 7 ish.
Diary Entry (by Sue)
Out of our real beds at 7.40. Breakfast in the '70's dining room of the hostel, where one wall was a display of stuffed birds and animals, was toast and cakes, plus some very nice 'café con leche' - a second cup was requested. 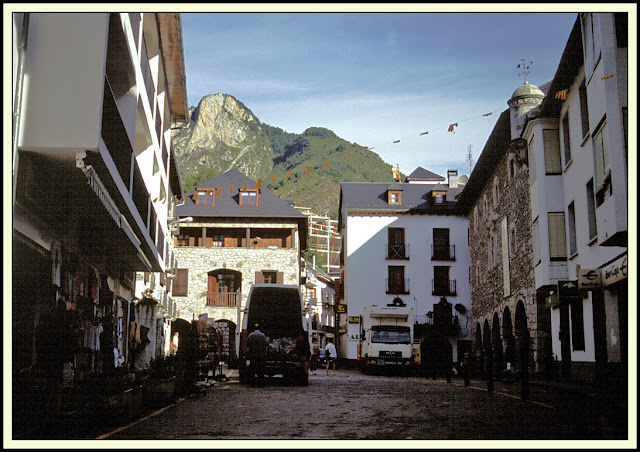 Bielsa
Away at 9.25 am under clear, sunny skies once more. The first path was lovely - Camino del Cao - well built and with a nice gradient. Not well used, so somewhat overgrown, and we soon got wet legs and feet. It led through poplars and oaks, being quite low.
After leaving this path and crossing the river, the new path climbed more steeply. It was coined 'Raspberry Rise' because wild raspberries grew in profusion and could be picked and eaten by the handful, which we did. Also, tiny strawberries were ripe, and bilberries higher up. 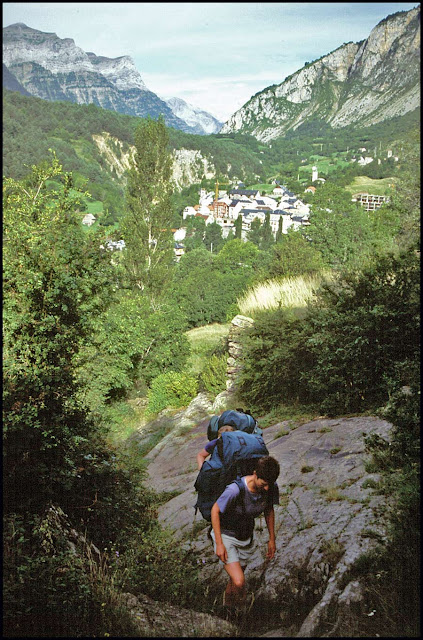 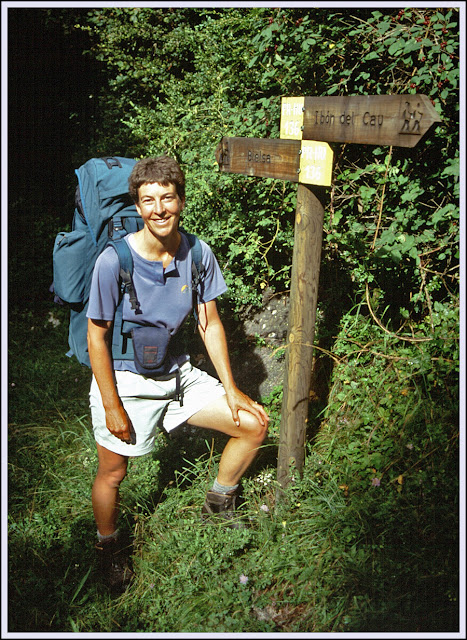 In the damp conditions, many different varieties of mushroom grew. Ants had piled pine needles against tree trunks to form giant nests. 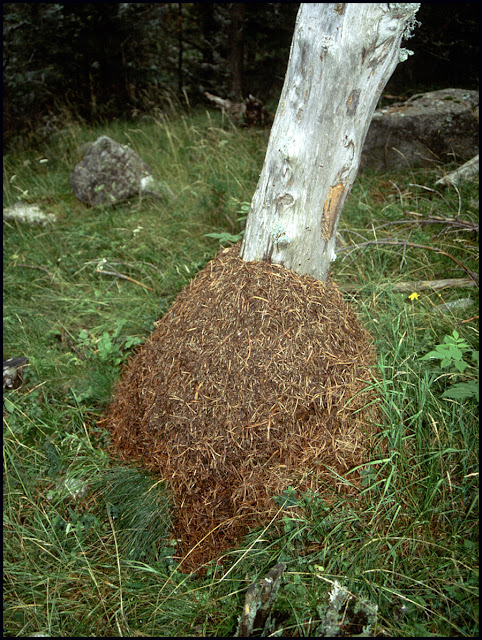 After about 300 metres ascent, the path deteriorated, and we lost the small . The steep hillside became littered with fallen dead, lichen covered trees, and in between were areas of fir tree, orchids and raspberries! 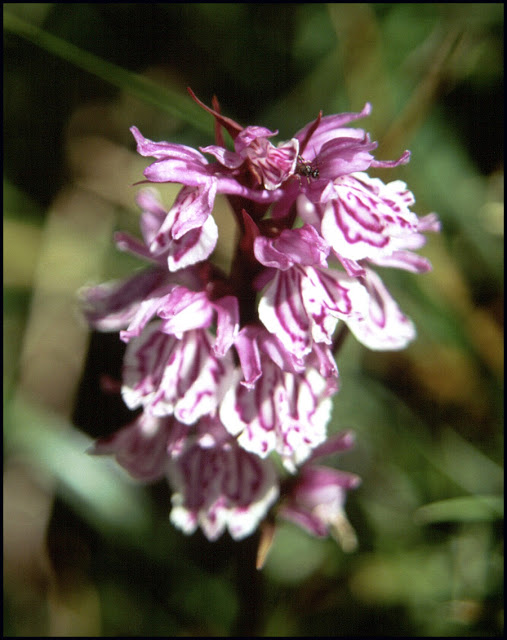 At one point we backtracked and tried again. After a while, we emerged from the trees, in the river valley, to scramble and climb steeply up grass beside it, crossing over once or twice for ease. We'd only had one short break, before a lunch stop at 2 pm.


Not the best location, but at least we were now at the top of the steep section. There were casualties. I lost a sock that had been drying behind a rucksack strap, Julie a pair of gloves also strapped to the outside, and the ignition for the stove in Martin's side pocket was broken, maybe knocked against a tree. Also, very scratched legs for Sue and Julie. 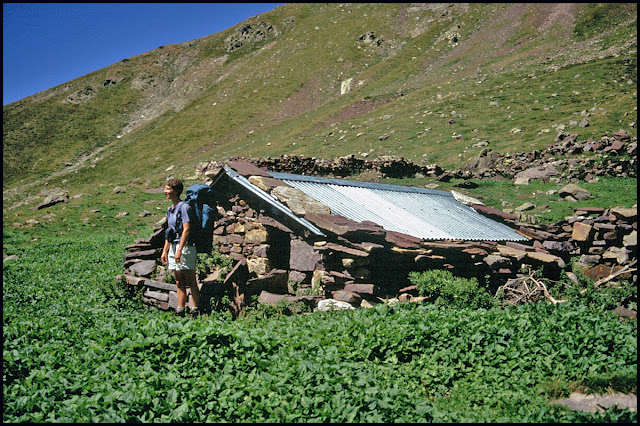 Lunchtime outside a shepherd's hut
After a lunch of bread, blue cheese and tomato, the path contoured round the now treeless hillside, views over beautifully clear.

With the valley now below, it became clear we had ascended the wrong river valley and should have been further east. Anyway, the path became obvious now, and gave a good view of Monte Perdido. 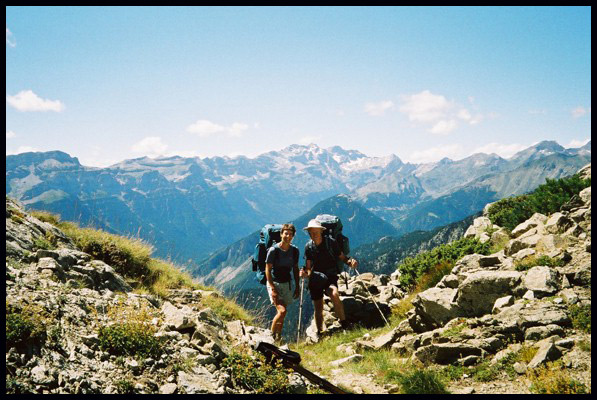 After 1000 metres of ascent during the morning, one more col had to be crossed, after a grassy climb. We reached Colla de Pardinas around 4 pm, and still had a good distance to go! 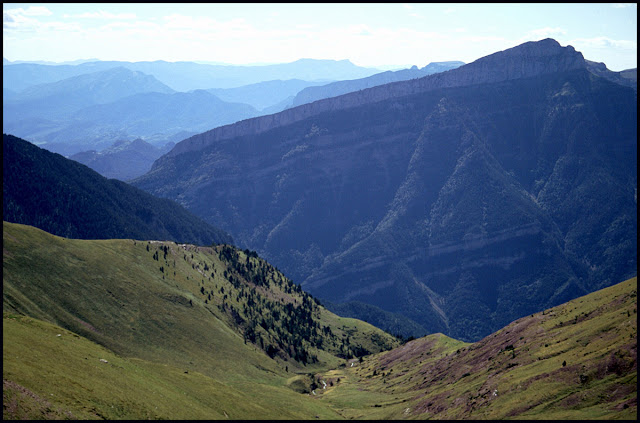 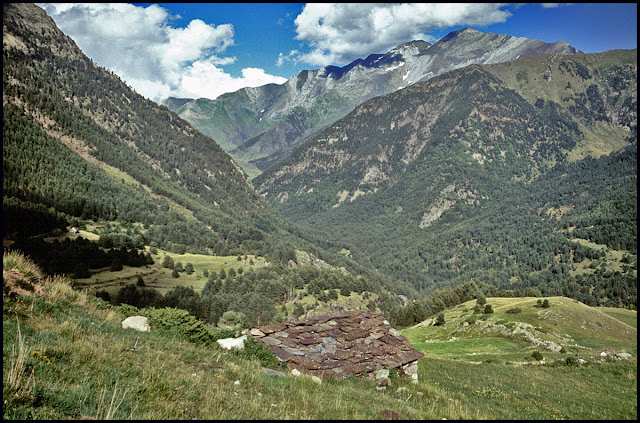 For the next two hours, we descended grassy slopes, grazed by cattle, to join a jeep track that zigzagged widely, amongst several small dwellings / shepherd's huts.
The late afternoon sunshine on this verdant valley was lovely. Eventually, the track joined another, and the GR11 path came in from our left.

Finally, at 7 pm, Camping Forcallo came into very welcome sight. Until the final kilometre, we had seen no one walking all day. Paid up and bought tins of beer, which went down very well before we put the tents up. Dinner was prepared rapidly - cup-a-soup, three cheese pasta with tuna and frankfurters, and hot chocolate. It soon went dark, so bed was around 9.15 pm.
Weather today was sunny but cool.
Stats and route (Viewranger):
21 km, 1700 metres ascent, 9.5 hours 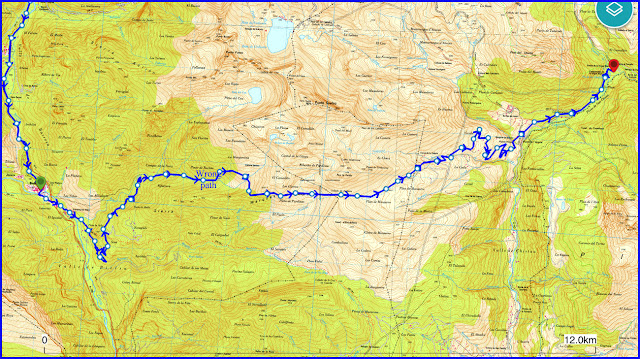 Next Posting
Previous Posting
Index
Posted by Phreerunner at 08:23