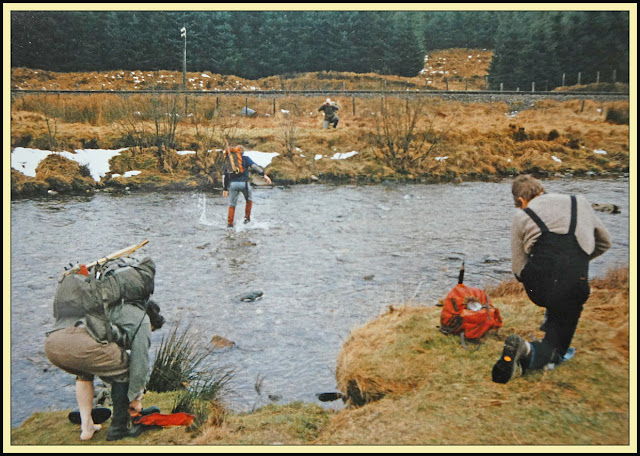 I've reported on the equivalent 1985 trip here, and the 1986 trip here. There may be more reports in due course...
There follows the diary entry for the trip, written mostly by Ian and Laurie. I've added a couple of maps, and inserted the pictures roughly where appropriate.

Everyone except JM assembled in at 4:30 to 5 pm to be picked up by Martin. That's Dave, Ian and Laurie. Reached at 7:34, just as John walked out of the station.

After a swift Little Chef visit, we arrived at Ardlui just after closing time. Shame. Pitched tents in the dry, on the soggy campsite - it's very mild. Good drive by Martin.

Weather dry - left campsite about 9:15 and drove round to a parking space beyond Tyndrum to attempt Ben Lui. The stepping stones mentioned in the SMC guide failed to materialise so Martin Dave and John cross with boots on, while Ian and Laurie paddled across in bare feet. (See above.) Dave and John got wet feet  but Martin's 2-day old Scarpa Manta 5 Speeds didn't leak or give blisters!
The path then led up the side of Eas Daimh, where Ian misidentified the mountain we were aiming for. 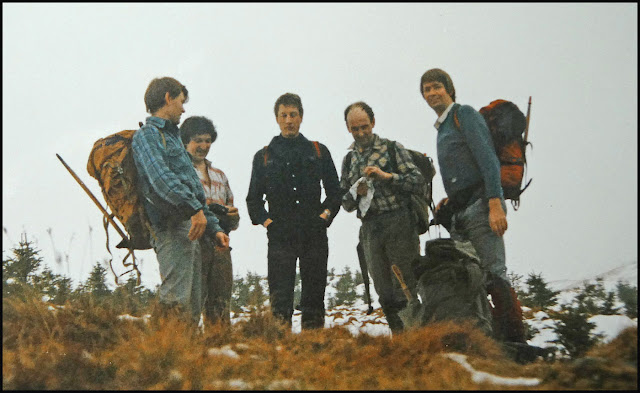 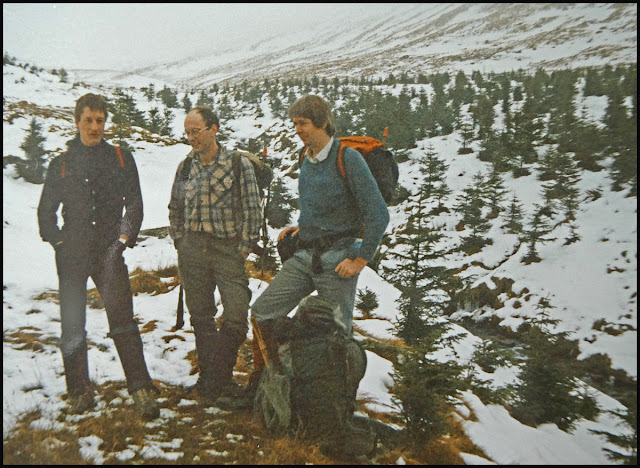 The path then headed up the hillside beyond a deer fence. 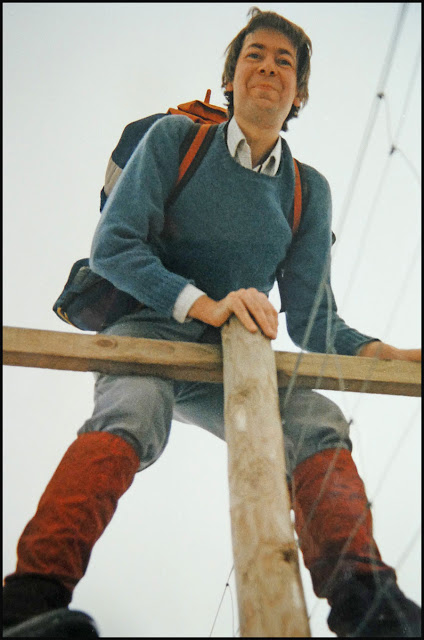 Everyone was getting hot, and started to remove clothing. After protestations from the rest of the group, Laurie kept his trousers on but added visual pollution to the noise pollution of his Walkman by removing his shirt.

The trail got fairly icy as we overtook another party (they were psyched out by the sight of Laurie, who eventually put a shirt on after complaining of icicles under the armpits!) 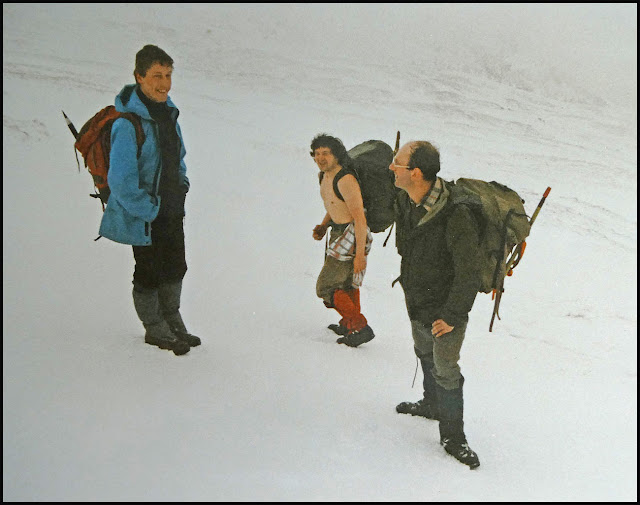 The white out on top was such that everyone - especially John - was worried about inadvertently walking off the edge of the ridge. The white out also gave extreme trouble in identifying the summit. Dave still thinks we didn't reach it. 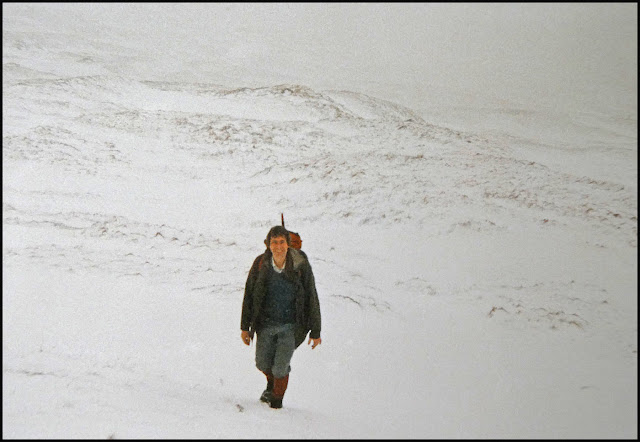 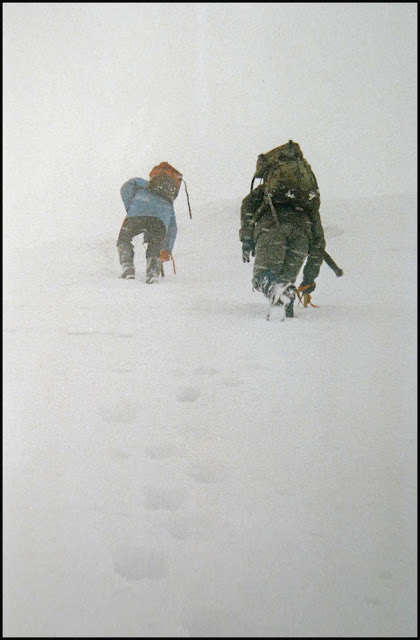 After a short rest we set off down to the col for lunch. Unfortunately we set out in the wrong direction (SSE) and only realised after several lunchtime cols had been passed - each lower than the last!

A long contour around the mountain solved the problem, ending with Martin almost walking over the edge of the ridge we were aiming for. We then descended to the col we had originally aimed for at lunchtime, during which time the party inadvertently split up when Dave, John and Laurie failed to keep up with Ian and Martin's slithering. So Ian and Martin slowly set off up Beinn a' Chleibh, looking for the others (who had stopped to put crampons on - so we wouldn't have seen them) and reach the top without a struggle.

The weather was getting unpleasant so we finished Martin's coffee and descended fairly rapidly, Ian nearly going over the edge this time, until we got back to the col. We then set off down to the Eas Daimh and saw the others almost immediately. (They seemed not too pleased at not being able to keep up!) An uneventful bum slide and walk back followed. 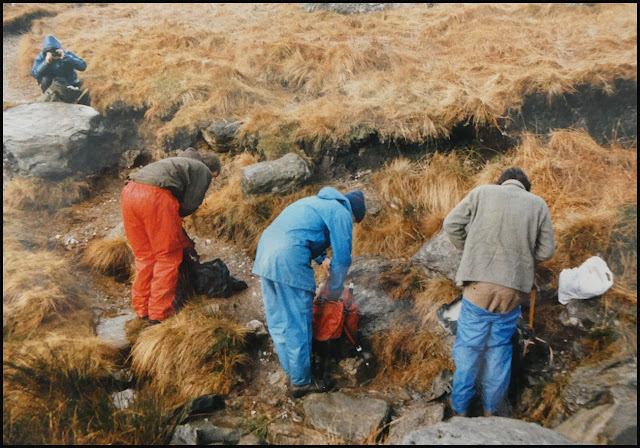 At best the noxious vapours which jet propelled Dave up the hill were not present in our tent. However, the ubiquitous snoring of our neighbours which had given Ian a sleepless night on Friday was evident even at this hour (6 o'clock).

We had in fact had a pleasant splosh back across the river, this time Laurie being the only extreme person to remove shoes and socks to cross.

By this time our view of the red sky was accompanied by a tired Glaswegian who finished up in the boot of the Sierra, with all the rucksacks, for a lift back to Tyndrum.

Lots of nosh, Earl Grey, etc, Laurie being the most imaginative, and benefiting from Martin's condiments; Ian doing quite well despite a lack of stove. The Mark 5 occupants miraculously avoid any major spillage / disasters.

Also the Mark 5 is accompanied by resident, universal size type, WELLIES, not courtesy of Tyndrum's Green Welly Shop, but it still works, courtesy of Roger Freeman and British Rail, and not of wallies looking for donations to their pool fund, (which Martin and Ian willingly give). 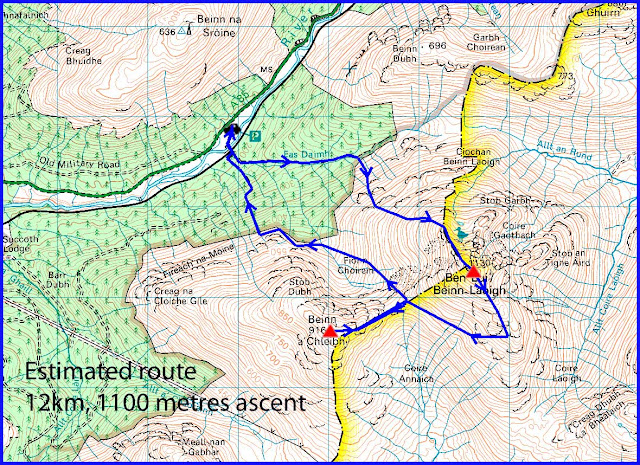 Quite a late start, with two brews and a truncated breakfast consisting mostly of biscuits. It started to rain heavily when we thought about de-camping - the pace picked up as the rain thinned. Ian pushed the packs into the back of the car with effective enthusiasm (perhaps he was assisted in this by the contents of a mystery package marked 'Produce of Colombia').

Once loaded, we decided on Beinn Narnain, the first Munro that anyone mentioned. Laurie realised he was navigating about 100 yards before Succoth, our starting point (just past Arrochar). There were a lot of cars parked by Succoth already.

Ascent of the valley side was steep and direct, following the remains of a mine-wagon hauling railway littered with interesting black glistening stones. Then a contouring track led round into the Allt a' Bhalachain valley which separates Beinn Narnain from The Cobbler. 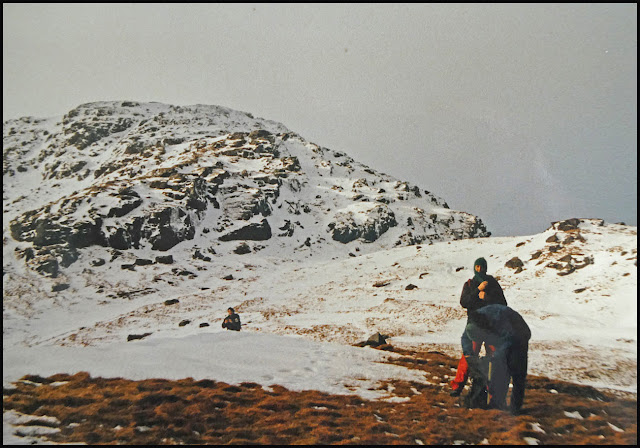 Soon this became wet and boggy, so we ascended over soft ground and soft wet snow into a coire leading to the middle of the summit ridge. The snow thickened and the way got steep: progress was tiring with unpredictably sinking steps. The sun made faint-hearted appearances as we came on to the ridge. The final ascent twisted round blocks of rock and small crags, interesting enough in parts to discourage Dave from going to the top.

Laurie hacked the trig point number free of ice and recorded it in his filofax.

Careful descent to the col and Dave, then back along the ridge. The way off involved a climb down of about 20 feet with extremely cold handholds - which we put off a while by having our lunch first. 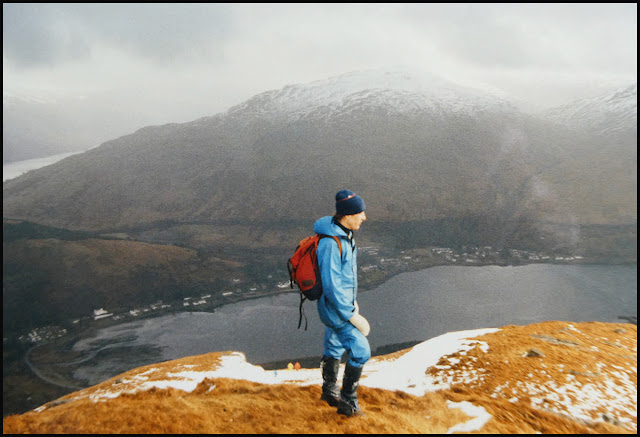 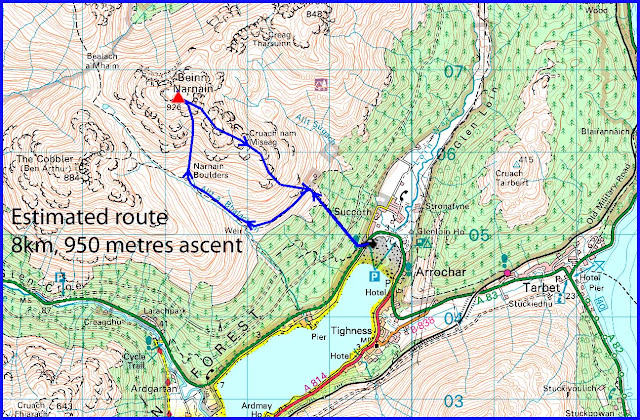 Back at the car much too late for John's Carlisle train connection - hence a more interesting journey to via Penrith and .
Posted by Phreerunner at 16:18