Wednesday 22 July 2020 - Around Slattocks with Alan and Sheila 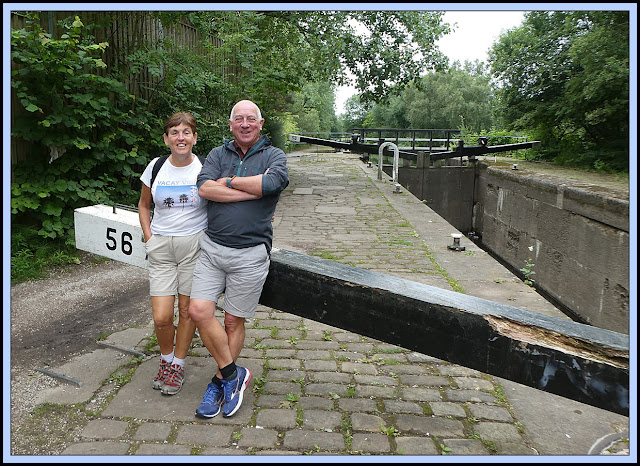 An invitation from Alan and Sheila to accompany them for a morning walk from their home in Slattocks couldn't be resisted. After light traffic on the 23 mile journey around the M60/M62, a 9 am start in fine weather saw us wandering down the Rochdale Canal towpath. Familiar ground - two hours for me by bike the other day, but less than 30 minutes in the car today.
[Note: click on an image for a better version/slideshow.]
After leaving the canal at bridge 68b (below) we took a stroll down the old loopline to rejoin the canal near bridge 69b. 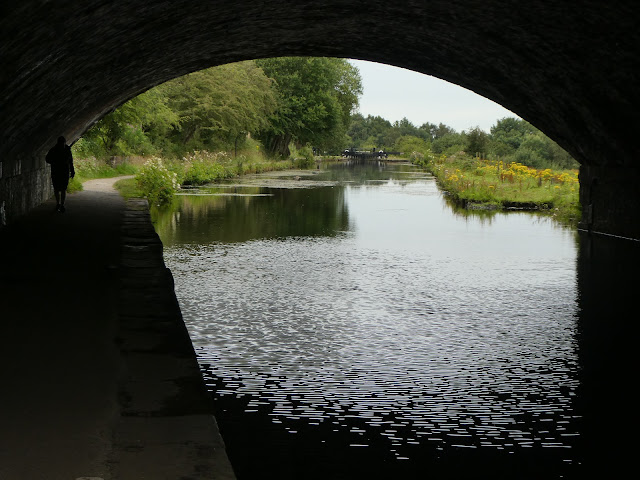 En route, views back revealed a mixed landscape of farmland and industry, with pylons and a wind farm prominent. 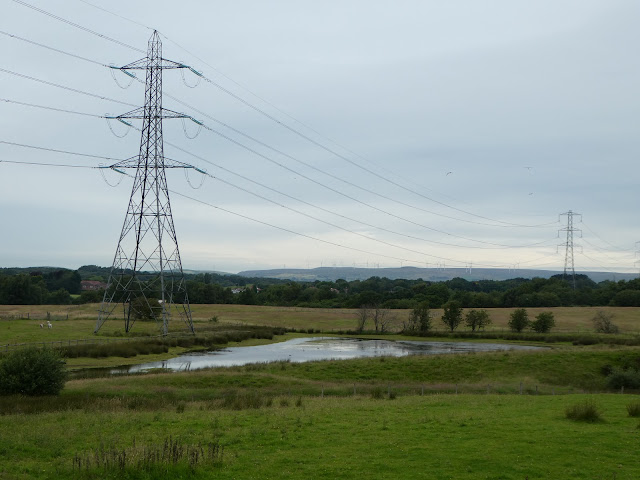 On re-joining the towpath, we watched a mallard shepherding her young - not an easy task given the hazards of pike and herons, not to mention the buzzards soaring high above. 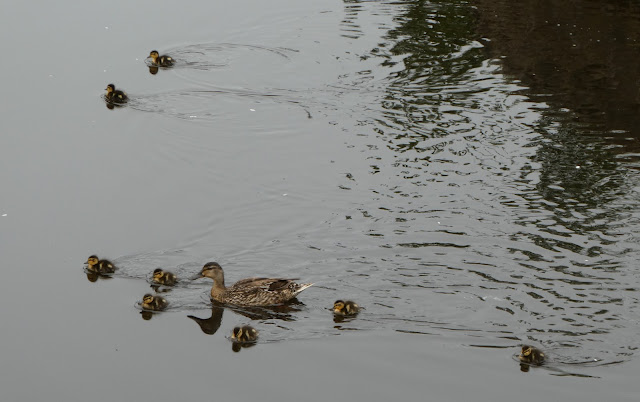 Apparently the leaky canal has recently been repaired, but the section north of bridge 69b is very low, and south of the bridge a short stretch is empty. 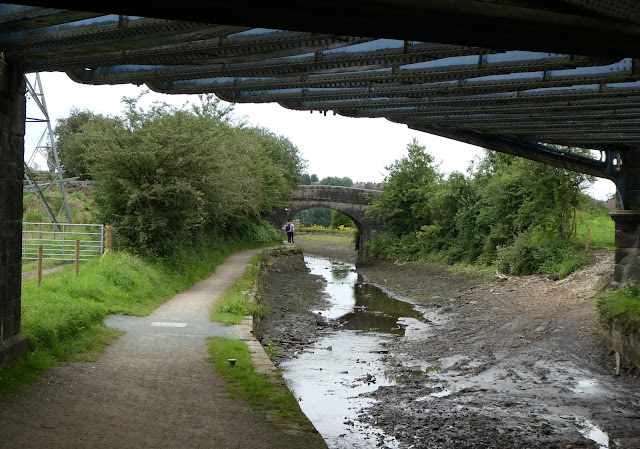 We left the canal where a steep set of steps leads down to the River Irk (below, it's far from empty). We followed the path through Chadderton Park, turning left at the road leading up to Healds Green and Chadderton heights. 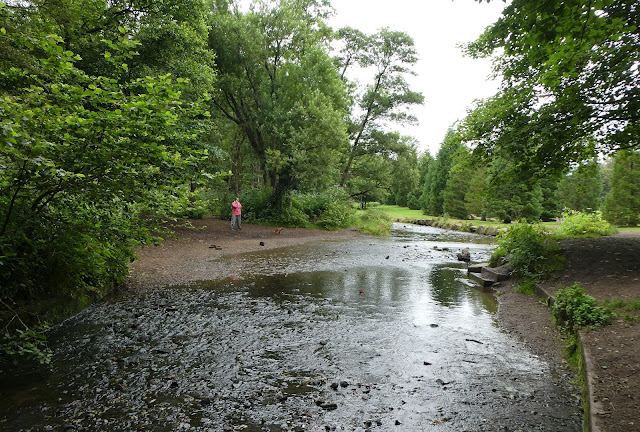 Cinder Hill Farm appears to be one of Alan's favourite places, where he can commune with the produce before purchasing supplies from the farm shop. 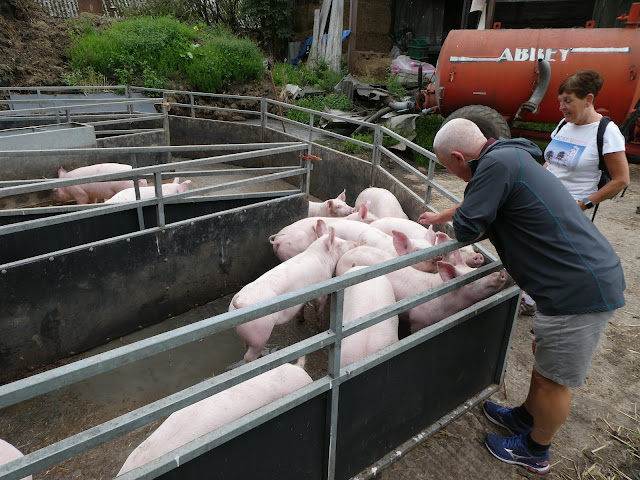 It's that time of year - lots of Rosebay Willowherb in the hedgerows. 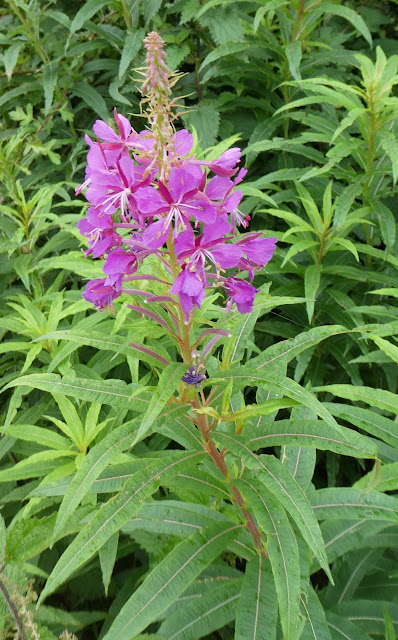 Past Cinder Hill Farm, a T-junction is reached where we go right through the farm leading to Oozewood Road and the furthest entrance into Tandle Hill Park.
I'd not been to Tandle Hill before. It's an interesting place where beech trees were planted in order to discourage people from congregating in large numbers, as they did before marching to Manchester in 1819 to take part in the demonstration that led to the Peterloo Massacre.
We headed for the café, outside which Alan and Sheila could enjoy takeaway coffees, whilst I emptied my flask of tea and shared some fudge brownies.
Then a walk through the woodland, with good views at its margins, to the delights of Yorkshire. 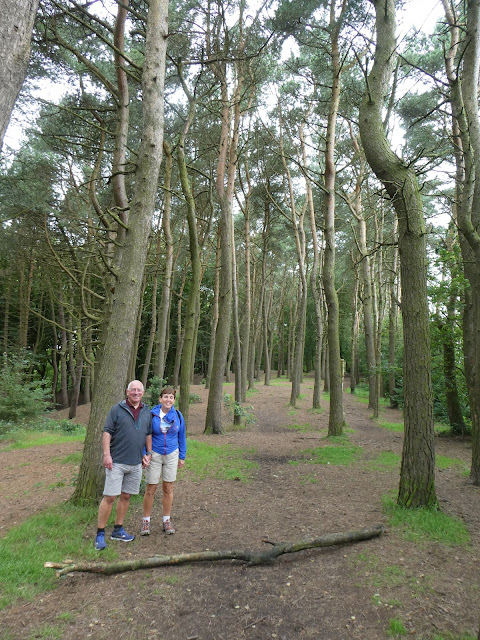 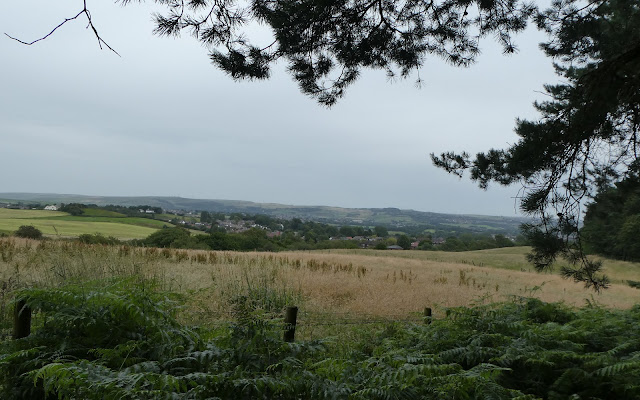 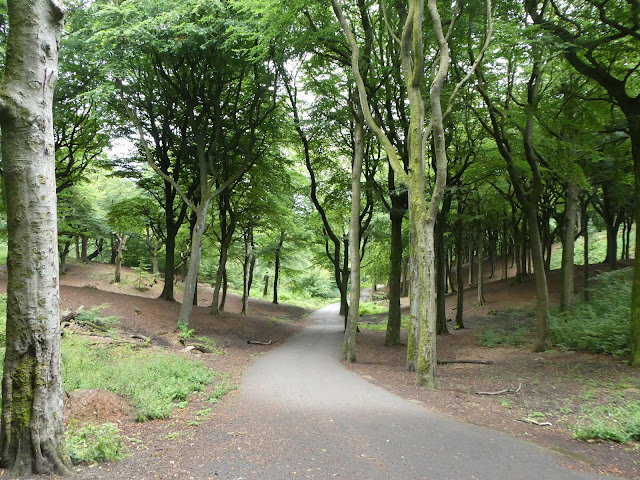 Some steep steps led to a war memorial in a spot where in 1513 it was the site of a beacon. 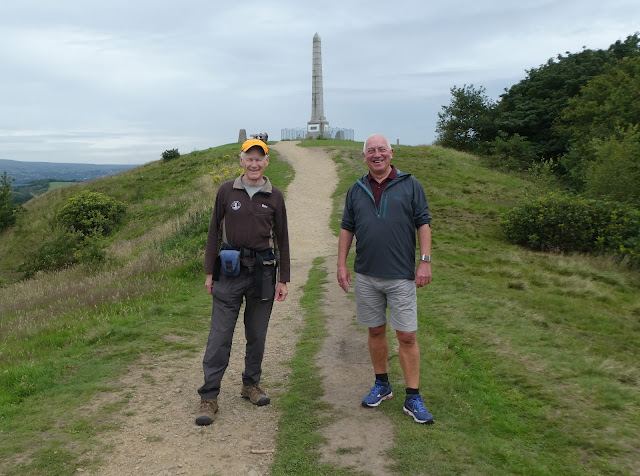 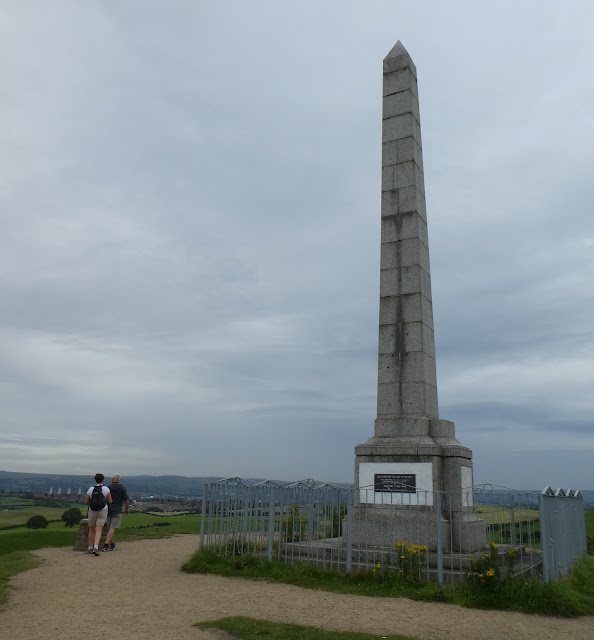 Alan and Sheila's house is almost visible to the left of the next picture, in which Winter Hill is just off to the right of the horizon. 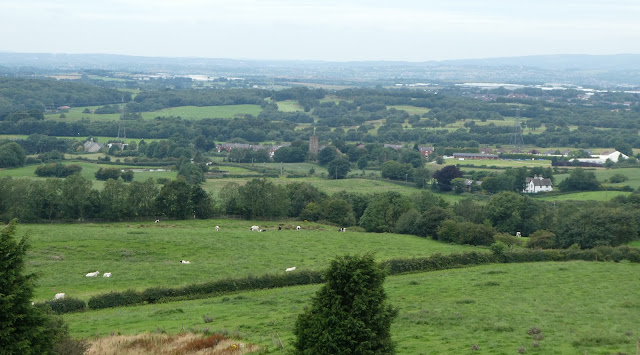 There's a recent memorial to those killed in the Peterloo Massacre. 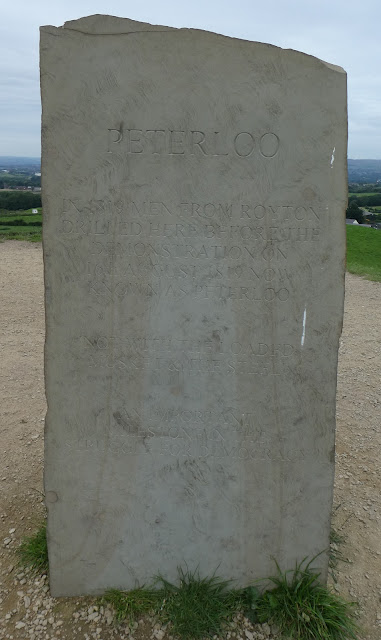 From the Tandle Hill monument we took on an old green lane which exits onto Thornham Old Road rather than the short cut down and through the farm.
After a few minutes we reached the Tandle Hill Tavern, which has re-opened after Lockdown, subject to a bewildering and rather jolly set of  'House Rules'. 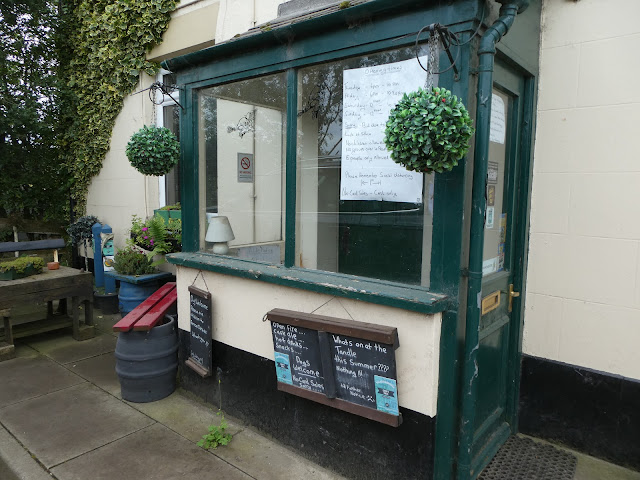 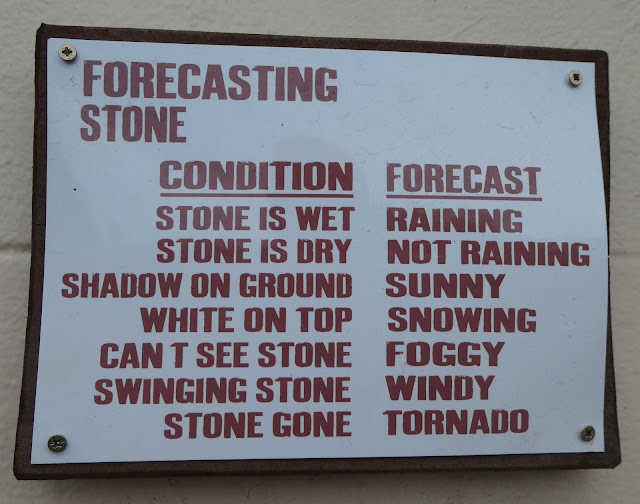 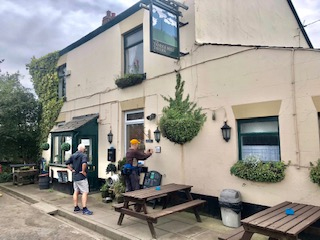 Beyond that, our path skirted fields, some of which are imminently due to give way to housing. 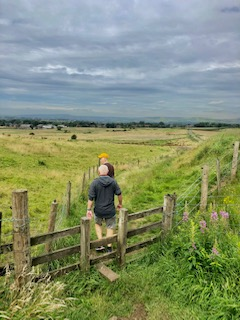 There are numerous signs, trying to persuade the planning authorities to retain the existing Green Belt. Not much chance of that, I fear. The land shown below will soon be a housing estate.

Re-joining the canal, we noticed lots of this attractive, erect, flower - Purple Loosestrife I think. Hopefully Stewart (aka Buryman) will correct me if necessary... 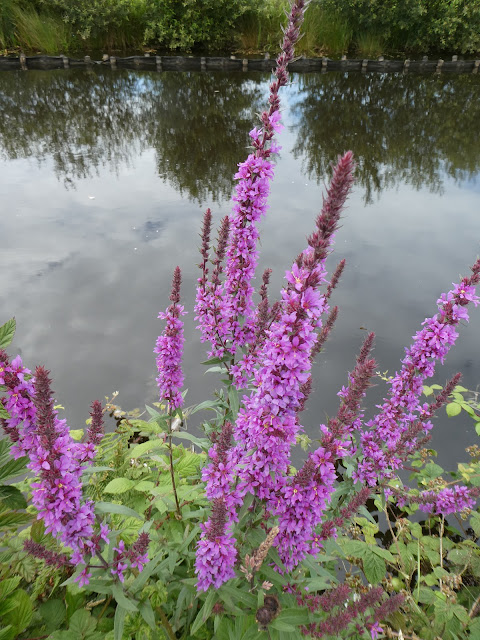 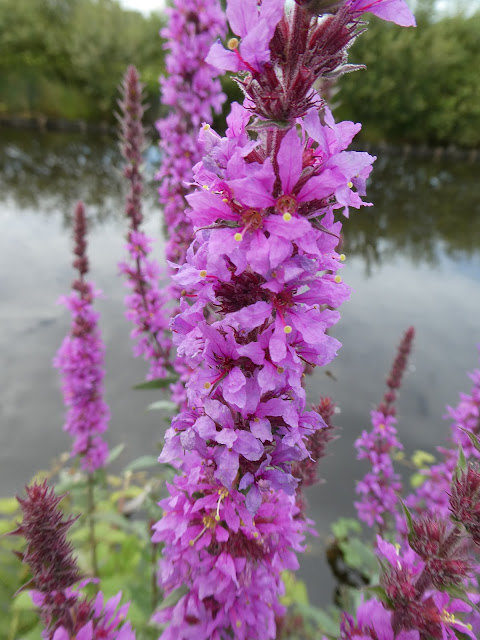 We were back at base after nearly 14 km, 3½ hours, and around 180 metres ascent, after a lovely morning walk in fine company. 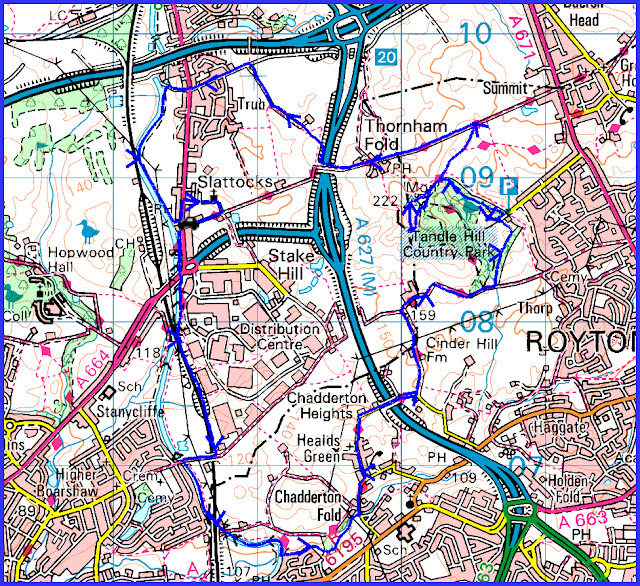 Thanks go to Alan and Sheila for organising this, and to Sheila for providing some photos (which I got into a bit of a mess converting from .png to .jpg, so only a couple of them are included above).

And this afternoon I'm pleased to report that our wayward living room curtain rail seems to have been fixed successfully by Jake from the Interior Curtain Centre, which, situated a five minute walk from home, is becoming our favourite shop for quality curtains and carpets.
Posted by Phreerunner at 16:53

Thanks for the company Martin, very enjoyable round as were the chocolate brownies. Hope you enjoyed it enough to do another route here in the future. It must make a change for you to be guided.

Thanks Alan. Actually I've been guided quite a lot recently, as Graeme planned the walks that eased me out of complete Lockdown, from his house in Wilmslow.

Good to see friends getting together again. Let's hope it can continue.

I used to be a postman in that area. Did Chadderton Fold, Healds Green and went up to Cinder Hill Farm before returning back down to do other properties. I used to think "I am being paid to do this" and people walk round here for pleasure.