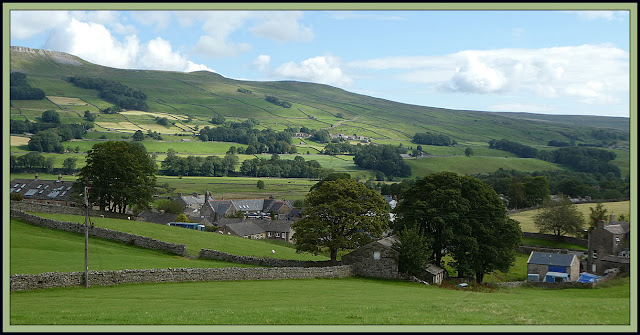 Sue at last was able to join me on this lovely walk up a hill we'd not been up before. It's not the most exciting hill - 'Dodd Fell Hill' translates as 'Plump Hill Hill' - but whilst the sun stayed hidden, it was fair weather and great for a walk in the Dales.
Here's Sue's diary entry, with some captions from me.
A Day Trip to the Dales

A rare day in the hills for me. In fact, although Martin has had some days out in recent weeks, this was my first full day out walking since our weekend in Ilam on 7/8 March!

A 2-hour journey saw us reach a quiet Hawes at 10am, where sun cream was applied but not really needed as there was significant cloud cover. The ascent was initially gradual through fields where muck spreading had recently taken place and the grass was still damp. 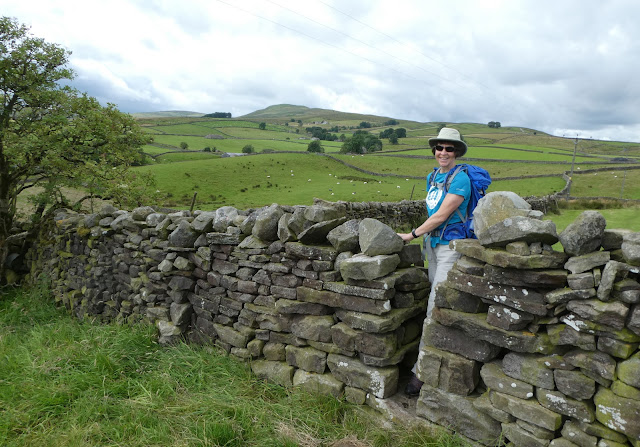 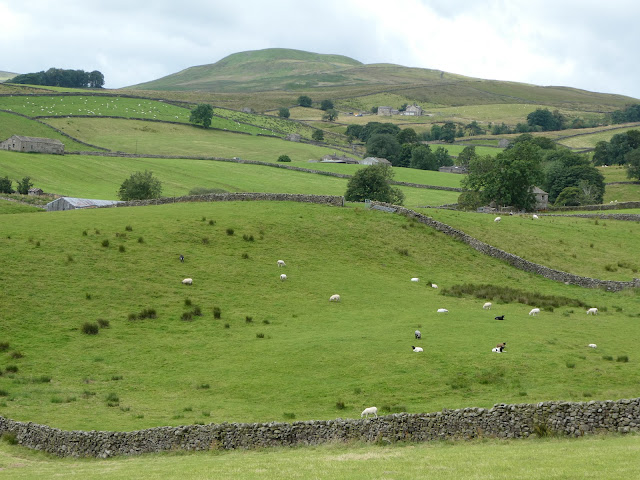 This is the view towards Dodd Fell Hill 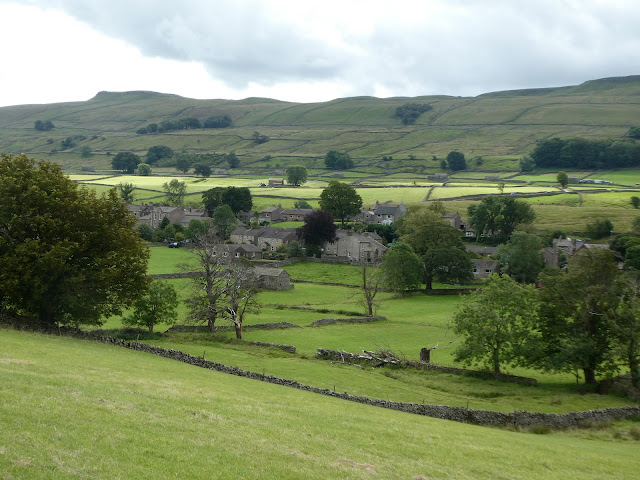 Looking back to Gayle and beyond
After a short section of road,  a patch of yellow loosestrife marked the start of a good track that climbed gently, with views widening over Wensleydale but grey clouds hovering stubbornly. 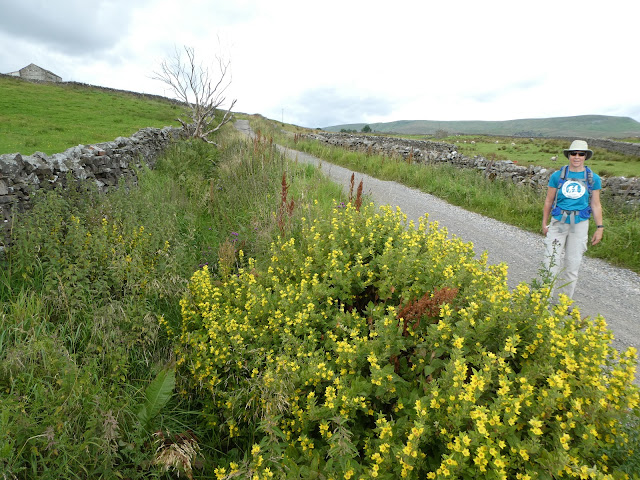 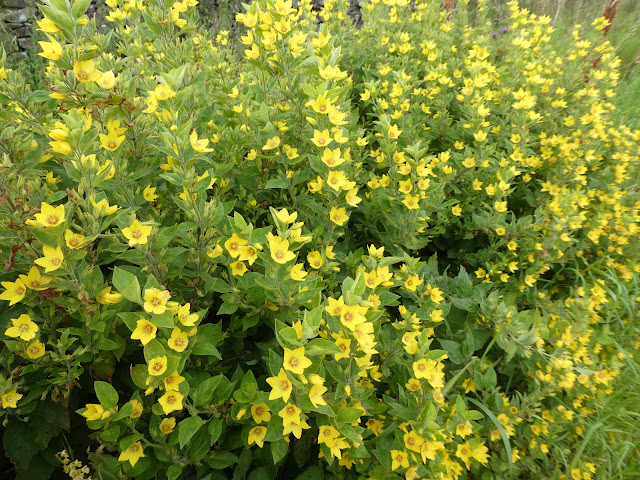 Tea, biscuits and brownies boosted the onward rise to our summit, with ‘peewit’ and meadow ‘pipit’ calls to accompany us. Leaving the track, we ambled over tussocks, which gradually became heavier with water and my feet didn’t stay dry in trail shoes! Lots of holes in the grass hinted at the number of voles around, of which I saw four diving in, disturbed by my steps. 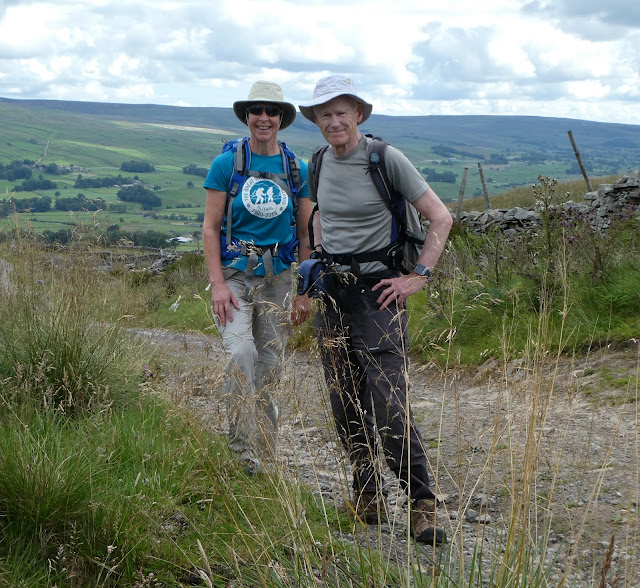 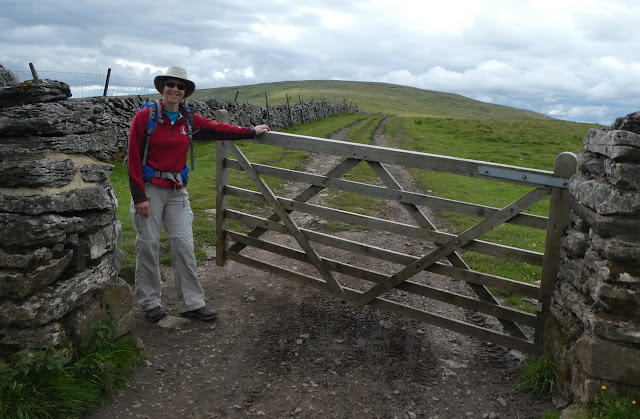 The trig point of Dodd Fell Hill was eventually reached, after a couple of false tops, and having to skirt between the areas of bog! From here, the views included the fells and distinctive tops of Ingleborough and Whernside, all rather dominated by heavy grey cloud. 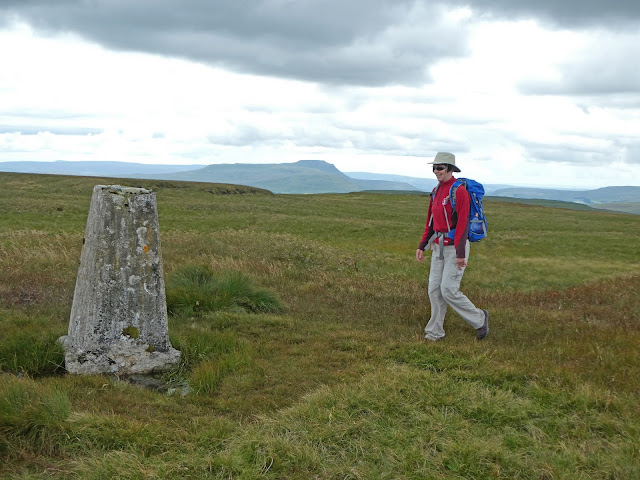 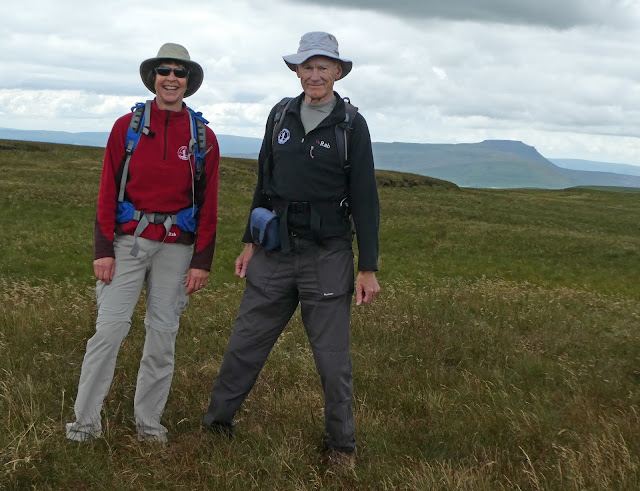 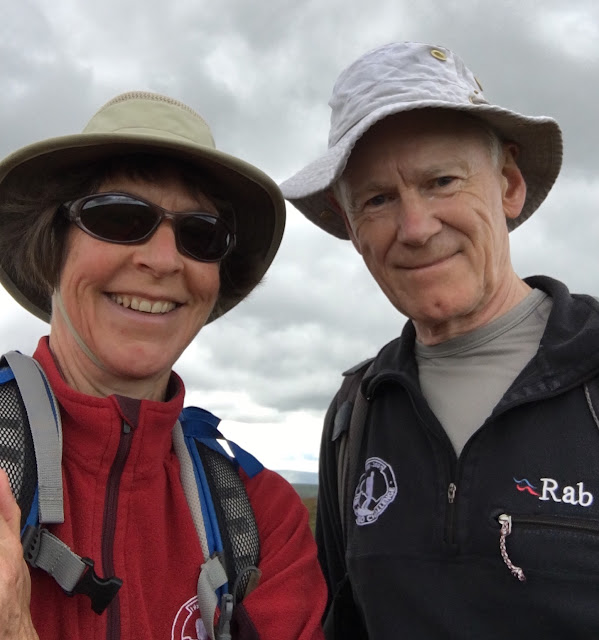 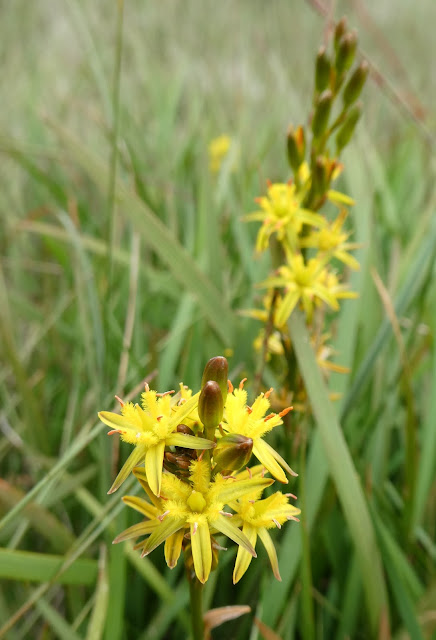 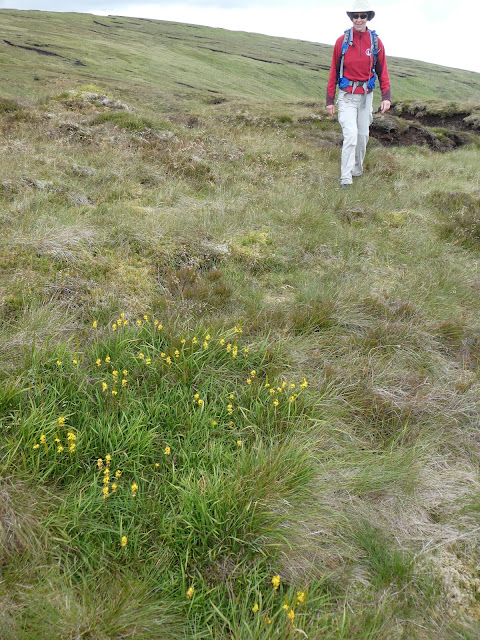 Just before reaching a surfaced road, we sat atop a mound for a sandwich and remaining brownies, moving on quickly due to the cool wind. The dark clouds were left behind over the hill, as we moved to another ridge on a good track, to where paragliders and hang gliders were ‘hanging’ out. 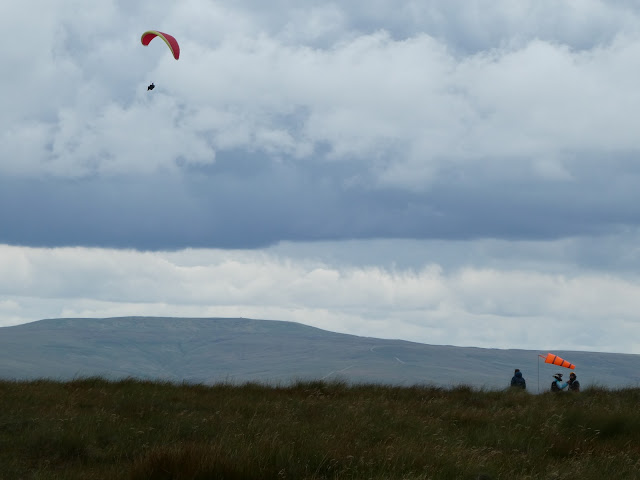 Soon after, there were two mountain bikers and four walkers in evidence, the first people we’d seen since setting out. 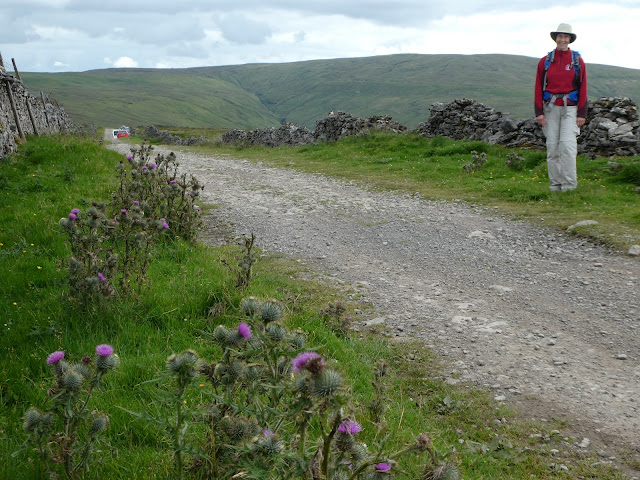 Looking back to Dodd Fell Hill from the paraglider hill
The descent took us down a lovely green bridleway. Whilst I waited at a gate, a shrew appeared a couple of times from his hole next to me, but was too timid to venture far, preferring to go back down, his long nose twitching. 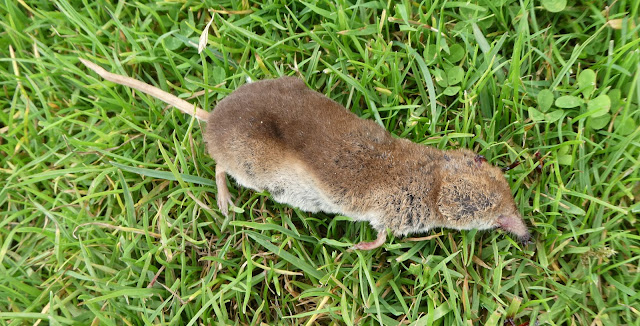 Sue was unable to catch the shrew, or a nearby stoat, on film, but I did manage to 'capture' this chap, who was definitely a 'slow mover' 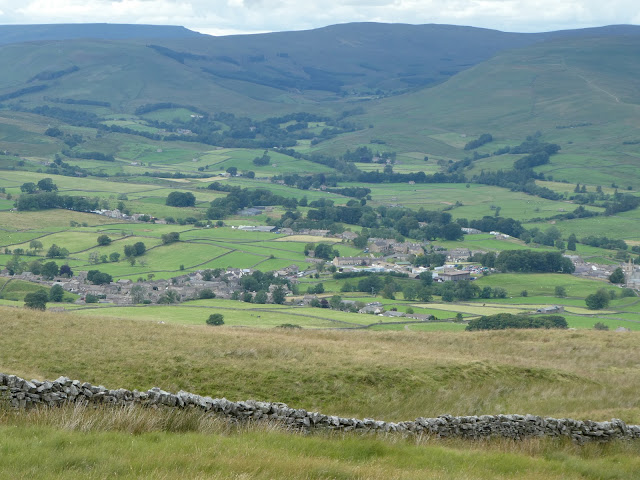 Above and below - looking across to Hawes from the descent path 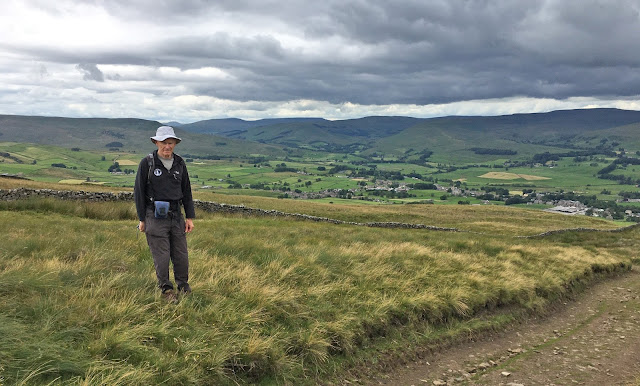 Approaching the hamlet of Burtersett we passed dog walkers, bringing the total of other walkers seen to nine. 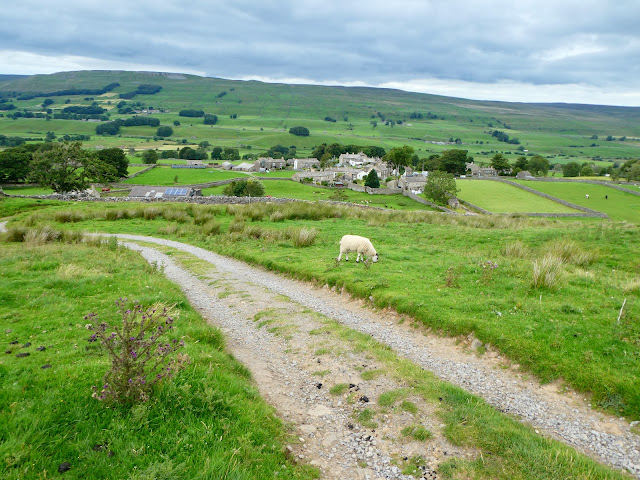 Our path back to Hawes across fields and through multiple small gate stiles was lovely, particularly as the sun was now breaking through the cloud. 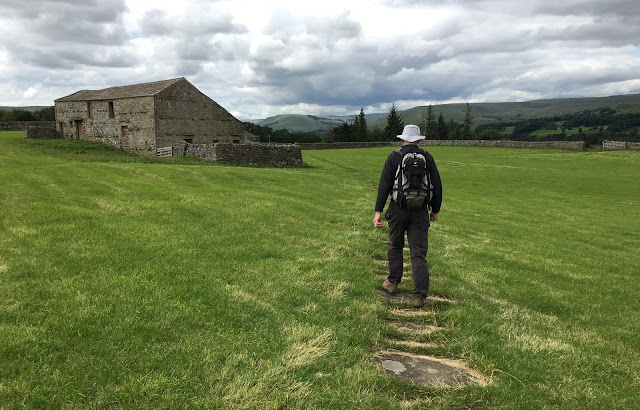 A stroll through the village revealed some shops open, but certainly not all, and not the numbers of people you would expect during August. No tables were available outside cafes so we headed back to Timperley for cups of tea ‘chez Banfield’. Of course, by now, the sky was blue, with pretty cumulus cloud.... 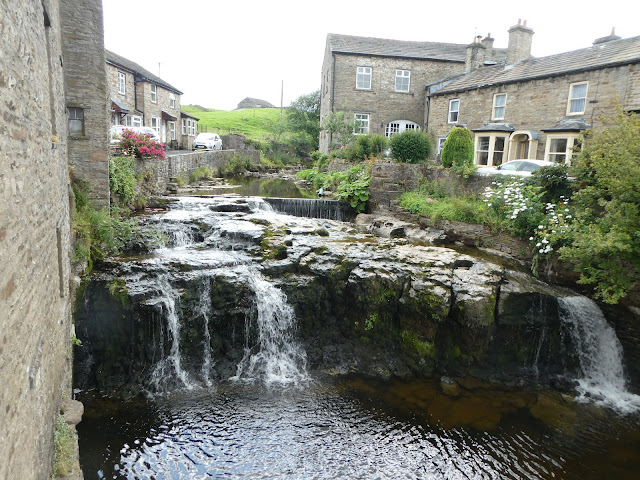 A good day out Grommet! 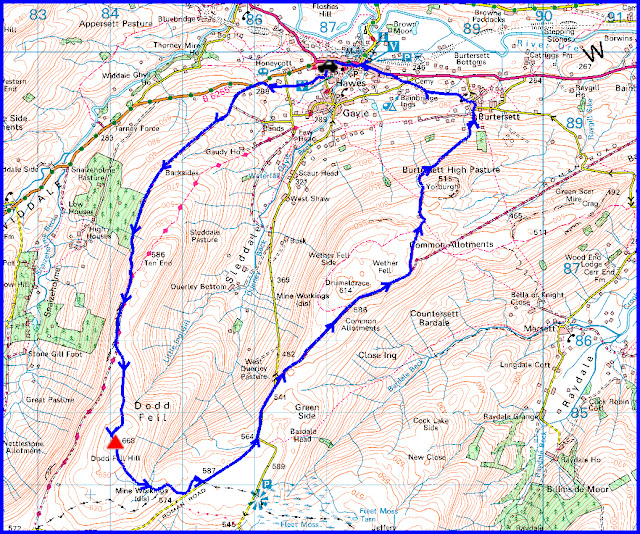 Glad you both managed a ramble after all this time. It does you good to get out.

Ah! The Yorkshire Dales. Apart from their inherent beauty they have hugely powerful nostalgic memories for me giving them an ambience for me beyond the description of any words.

Thanks Alan, thanks Conrad, it was certainly a good day out.