A Short Walk from Kingsley 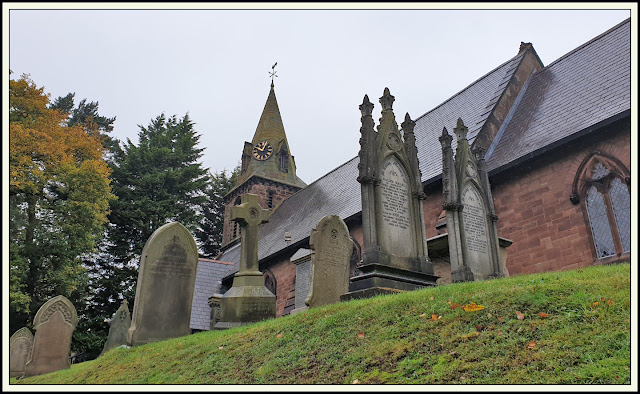 Why is it that we had the best turnout this year, for one of these 'Friday morning' walks, on a rainy morning in Cheshire? All seven of us managed to find the Community Centre in Kingsley (go down Westbrook Road, then Smithy Lane), though only two of our six cars found a space there due to a 'Slimming Ladies' class.

This was a walk intended to provide an update to Jen Darling's description of walk number 25 in her 'Walks in West Cheshire and Wirral' book. Her initial instruction to pass the Horseshoe Inn required an immediate edit, as the pub has suffered the same fate as the Spar shop in Appleton - it has been converted into a Co-Op.

Anyway, we passed the Co-Op and strolled up the road past the church, which loomed above us, and on to reach some steep steps that led away from the firmness of the tarmac.

The first stile had been satisfactorily replaced with a metal kissing gate, and the next stile was in desperate need of similar modification. the only redeeming factor was that the barbed wire fence beyond the rickety stile wasn't electrified! 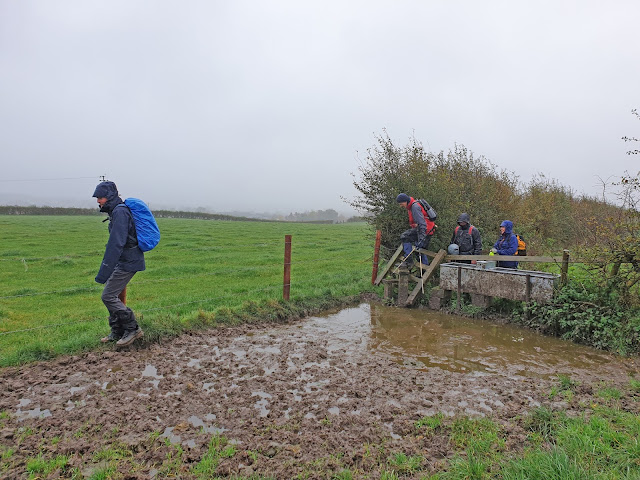 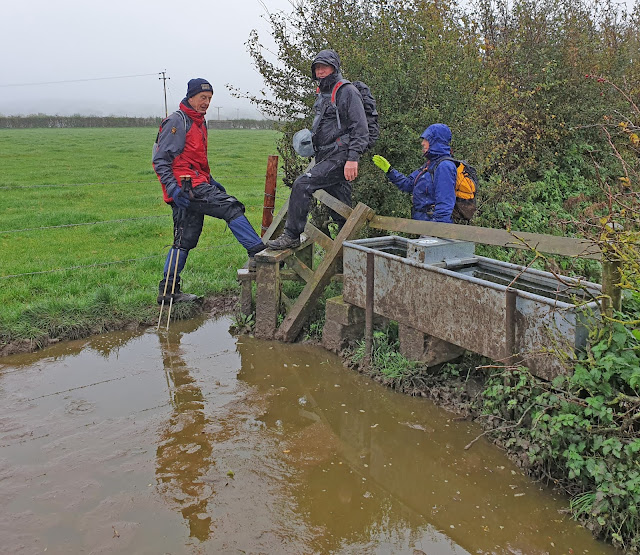 We then took pleasant paths, and after a while passed Peel Hall, a farmhouse built on the site of a much older moated grange. 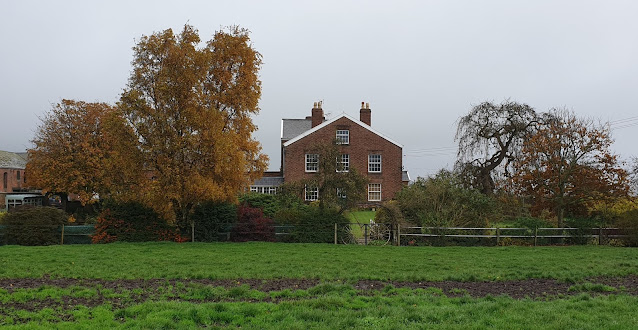 We soon got good views towards Frodsham, but we didn't visit Lady Heyes Craft and Antiques Centre on this occasion, though Jen recommends a visit - you would turn left down the lane reached after passing Peel Hall Farm.
En route to Bradley Orchard Farm, beyond Hatley Farm, we took a fine track enclosed by tall trees dressed in autumn plumage. 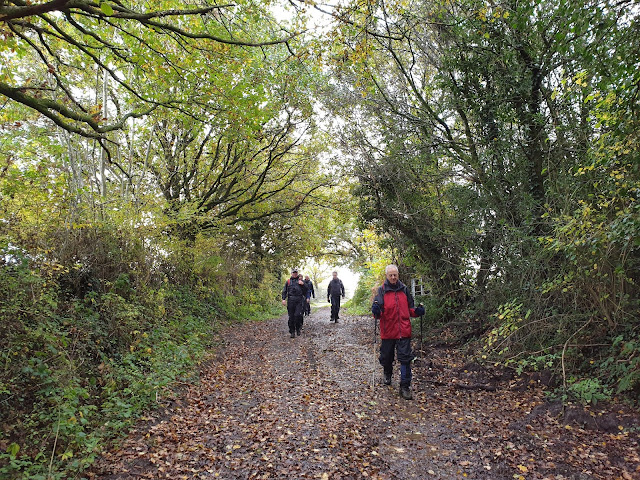 Bradley Orchard Farm was displaying some interesting artifacts from the past. 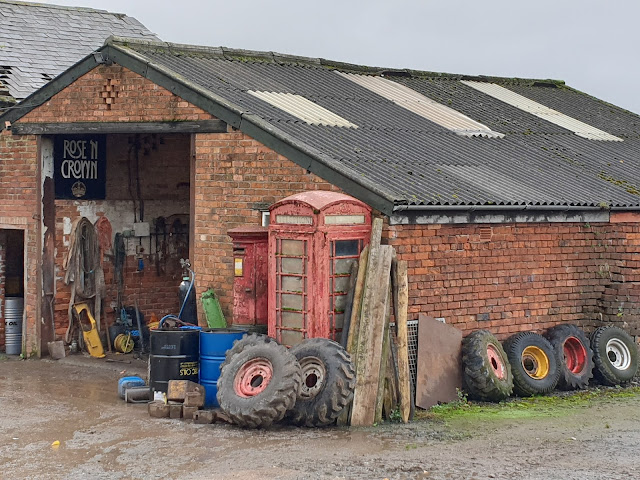 After missing the unmarked turn to the right beyond what Jen describes as a 'splendid mixed hedgerow' (now more like a row of medium sized trees), we re-traced our steps and made our way to the remains of Frodsham Lock on the Weaver Navigation. 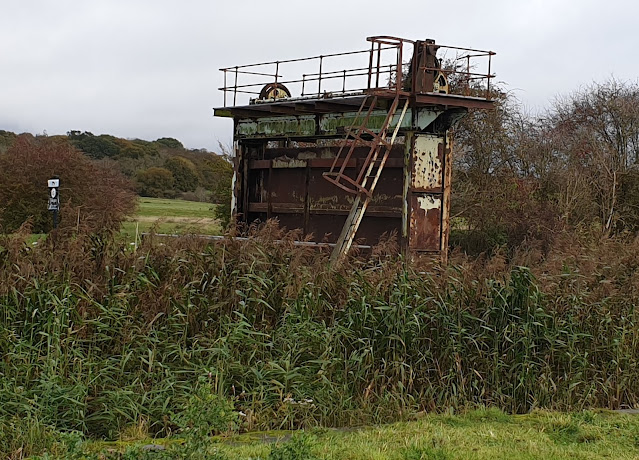 When Jen first published her book in 1988 there was a picnic area here. We stopped for elevenses on the one remaining bench. Alan and Sheila, Bridget, Cary, Paul, and Graeme, all carefully obeying the 'social distancing' advice.

We walked a short way along the towpath alongside Frodsham Cut. The River Weaver was tidal here, so to avoid delays a lock and sluices were built in 1781 to provide a deeper channel, with a large weir also being built on the river to force all boats to use the Cut and pay a toll. However, an alternative route in the form of the Weston Canal was built in 1810, and the Cut was finally closed to navigation in 1955. It's now rather neglected, and is home to a variety of wildlife. Today the swans and herons predicted by Jen were notable for their absence, but there were many mallard, and a huge flock of several hundred Canada geese in the wetland area between the Cut and Bradley Orchard Farm. There were also lots of pheasants in evidence today.
We soon found ourselves next to the Weaver Navigation beyond the Cut. I had expected a towpath, but if there was one it had been thoroughly churned up. We made our way slowly down to the small copse in the distance. 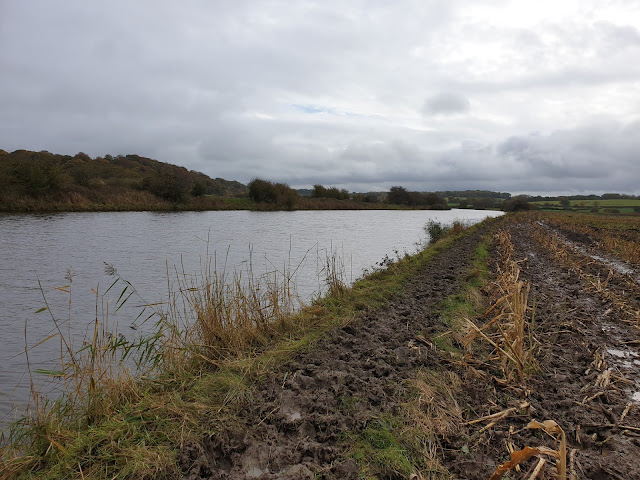 There are hundreds of Canada geese in this next picture. You may need to click on it for a better version! 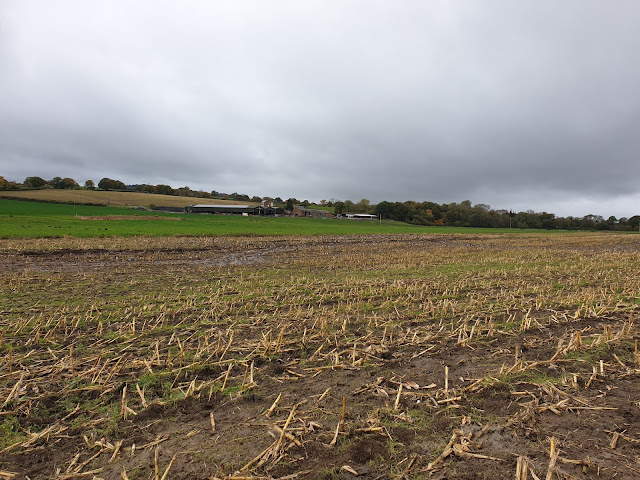 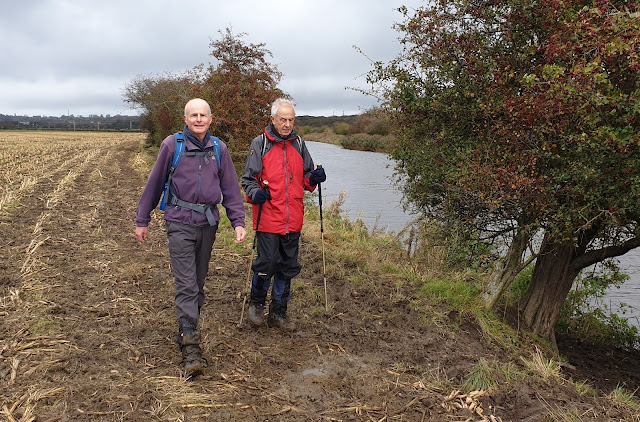 When we reached the copse, at a bend in the river, we bore right up to a minor road, after waiting for a quintet of quad bikes to pass on what was clearly a special track. In fact the map shows 'Quad Nation' near here, so it must be an organised activity. The five we saw had a leader (tutor) and four followers (students?). It looked great fun. The shooting we had heard earlier may have come from the same direction - hopefully just clay pigeons.

At Catton Hall we found an impressive 'John Deere' for Alan. It may have made his day! 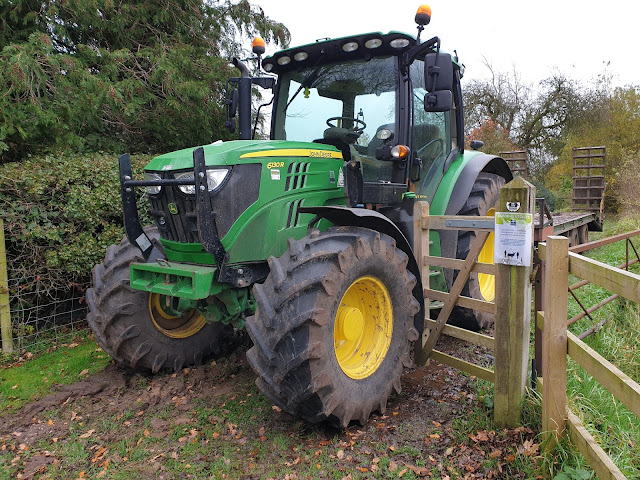 The track from here led inexorably back to Kingsley, passing a wood composed of regimented poplar trees. 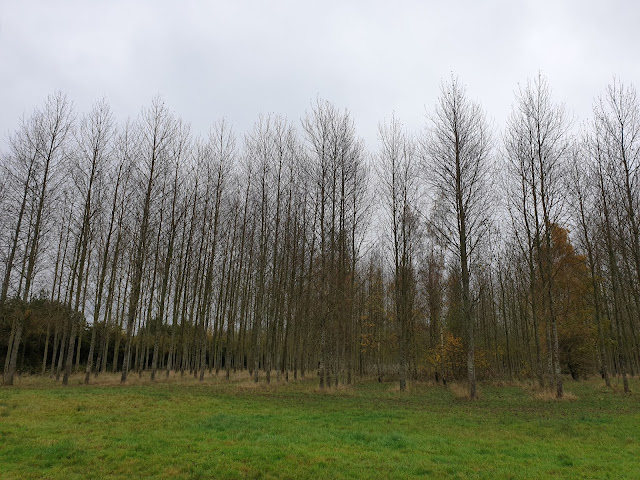 St John's church was consecrated in 1851, and was built in locally quarried red sandstone. An interesting looking place with an impressive lychgate. 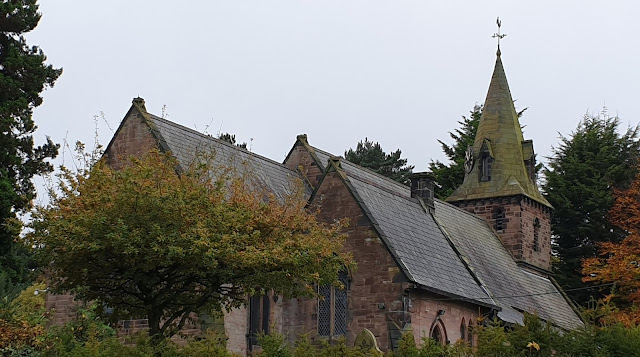 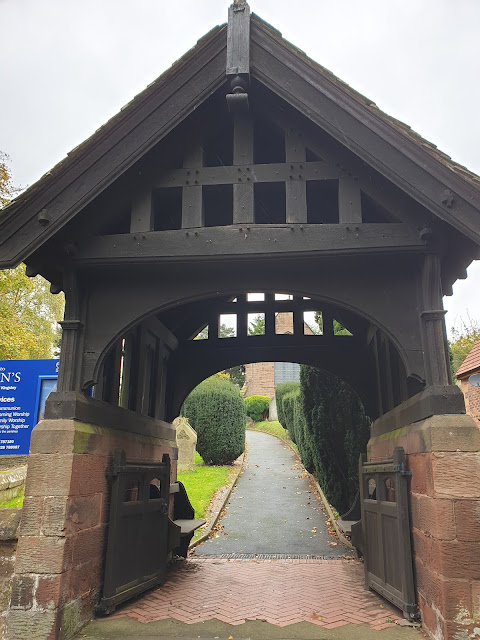 We passed some quaint cottages on our way back to the car park. Nearby, I'd left Sue's car's passenger side window open, and the satnav in a position where you could just reach in and take it.... 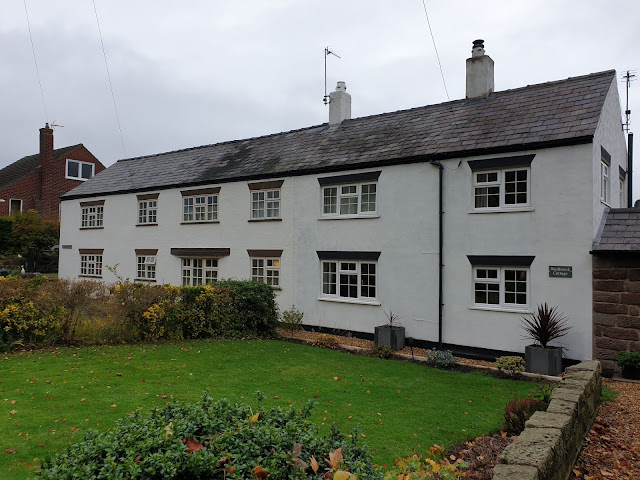 Jen suggests adjourning to the Horseshoe, and that's fine if you want a coffee from the Co-Op. Nearby, however, the Red Bull Inn, on The Brow, may be a suitable hostelry to visit in normal times.
Here's today's route - a little over 10 km, with minimal (100 metres) ascent. It took us about three hours. 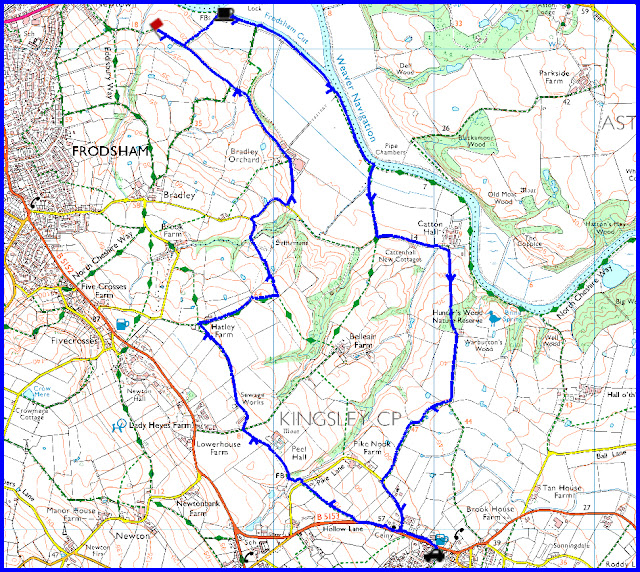 Thank you for your company, everyone. Next week I'll be going out on Thursday morning, on a short walk from Styal, advertised thus:
AlanR's excellent report on the day's walk is here.
Posted by Phreerunner at 21:15

Thanks for the walk Martin. Nothing wrong with your photos, they are equally as good as mine. Apart from telephoto shots, smart phones now take very good images.

'Mud Mud Glorious Mud' comes to mind. https://www.youtube.com/watch?v=4zpDF3Py7r8
I did the same trick as you leaving my wallet on the front seat with the window open for a whole day in a busy Whalley car park.Was I glad to see it.

Ho ho - good old mud!
I had no such anxiety as I didn't realise I'd left the car window open...