Sunday 18 December 2005 - A Christmas Walk in the Peak District 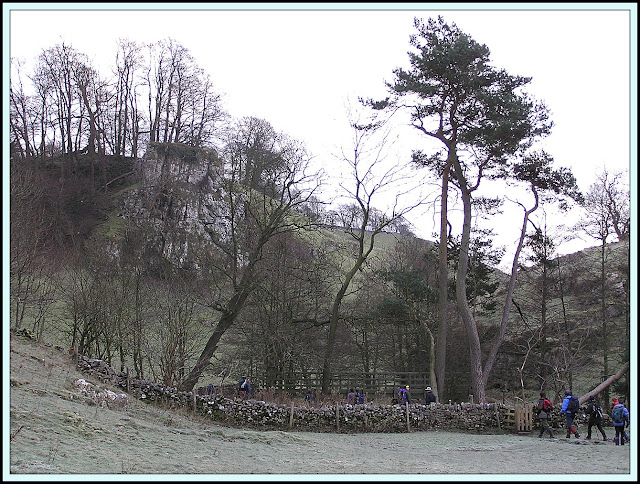 I've been organising Christmas walks involving pub lunches for nearly fifty years. They were used for many years as a venue from which to plan the following year's trips, details of which would then be photocopied and sent out with Christmas cards.

Time has moved on, and trips can be planned and advertised electronically at any time. Topwalks.com was set up nearly twenty years ago to do just that. However, the tradition of a pre-Christmas walk and lunch has persisted. These days, instead of proposing trips, I set a picture quiz that people can join in on or ignore.

Today I have, with great regret, had to postpone this year's Christmas walk, with lunch at the Crispin in Great Longstone, due to the medical emergency that is showing up our 'ruling body' as a bunch of incompetent amateurs. I've moved the date forward to 12 December 2021, but I do hope we will be able to visit the Peak District and enjoy a meal at the Crispin well before then.

Thumbing through old but 'unclassified' pictures with my mouse this morning, I came across these offerings from December 2005, which haven't seen the light of day until now. They aren't anything special, merely a brief record of the day, the diary from which is as follows.

"Numerous folk congregated in Hartington before 10 am. The bus [I had a 7-seater Espace at the time] was the only vehicle not to find a free space, so £4.20 was paid. Sue and I had Richard and Jenny, and Andrea and Thomas on board. Others were: Chris, Alys, Phil, Sue, Graham, Tove, Mike Coldwell, Graham Stevens, John and Fliss and dog Jess, Anne Donkin, David Armin, and Colin Jones, ie 19 plus a dog - a good turnout. [In the old days just three of us met up.]

On an increasingly cloudy but frosty morning, we ambled off along a firm path on the route shown [at the foot of this posting]. 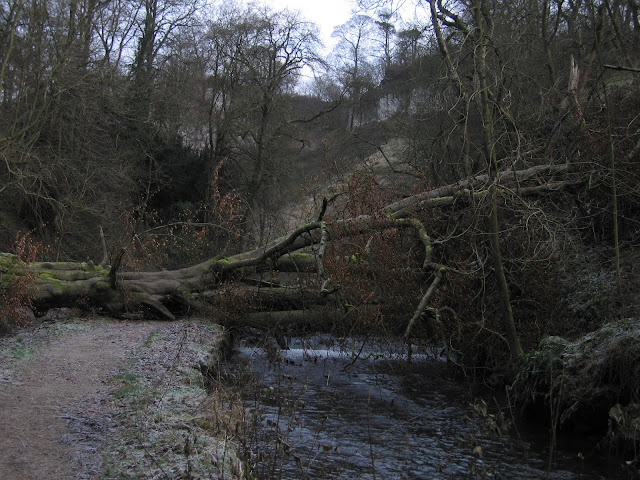 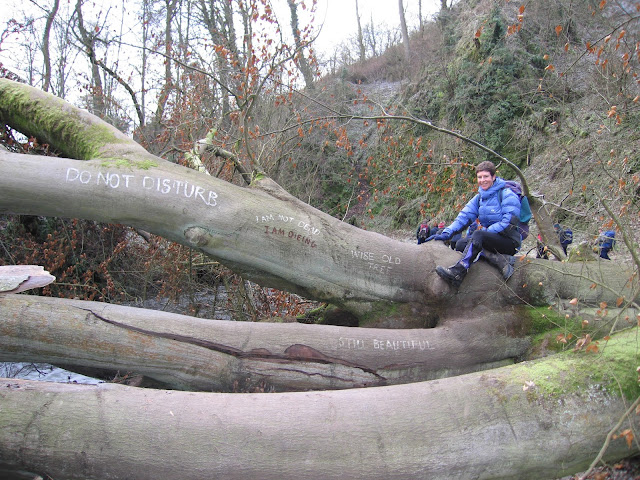 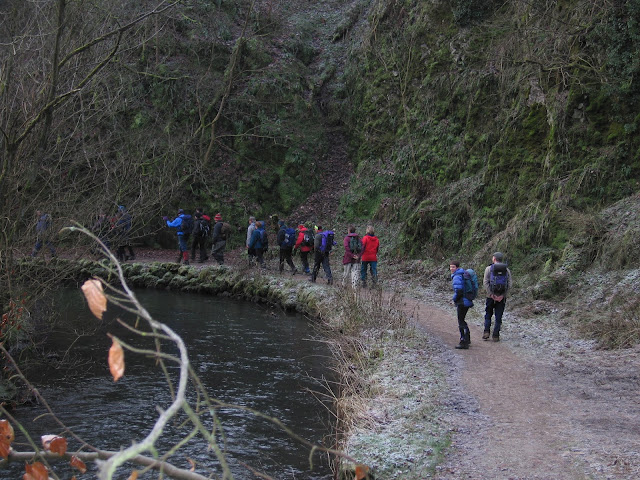 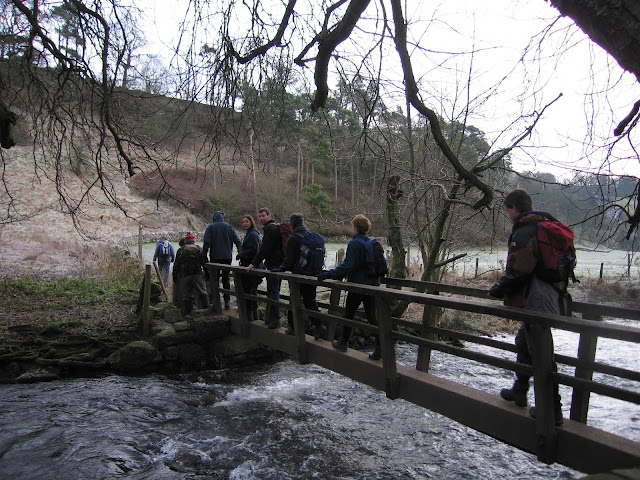 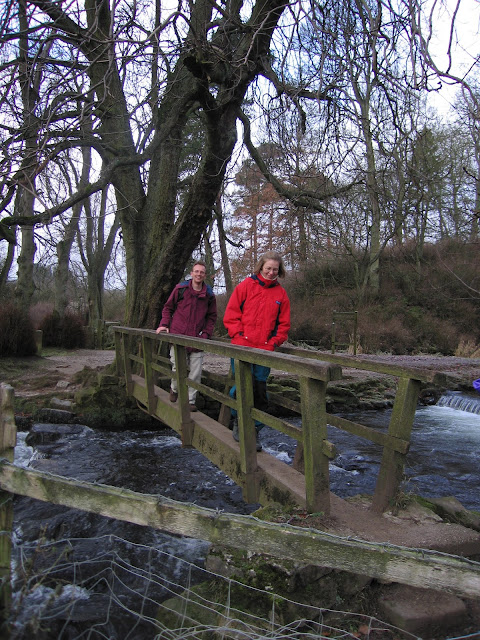 By the time we got to the junction with Biggin Dale we were ahead of time, so a brew stop, with chocolate caramel shortbread and fudge brownies, was in order. 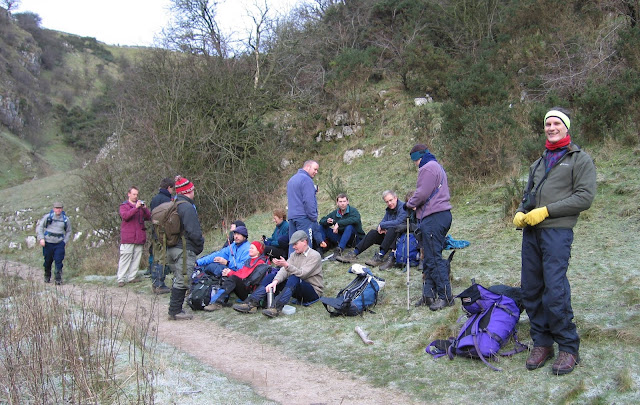 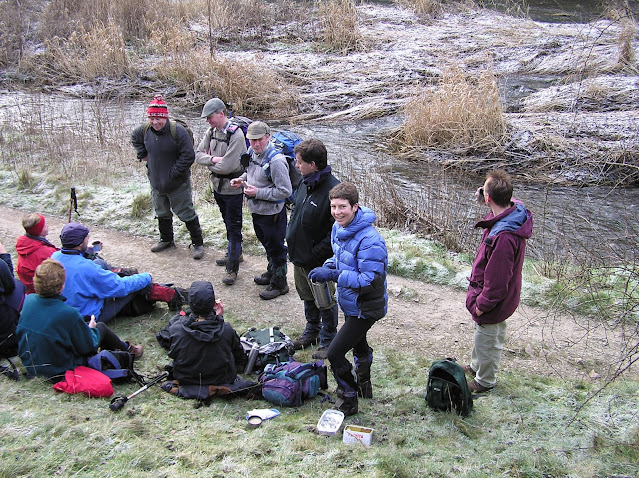 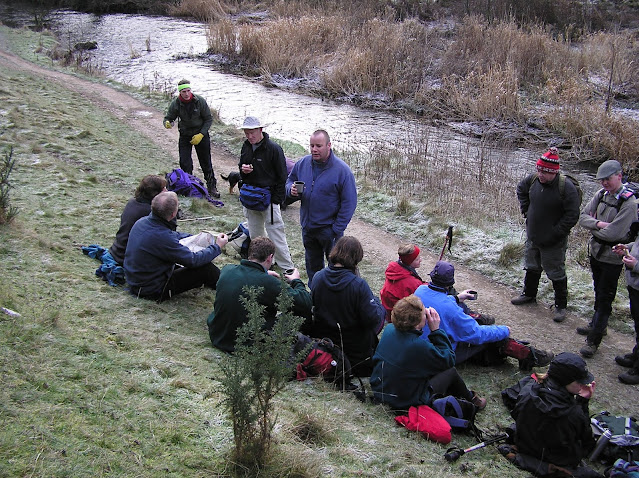 We eschewed the original planned route and dodged the first bridge, to continue on to cross the River Dove at Coldeaton Bridge.
A steep ascent led to a nice track past a Youth Hostel. 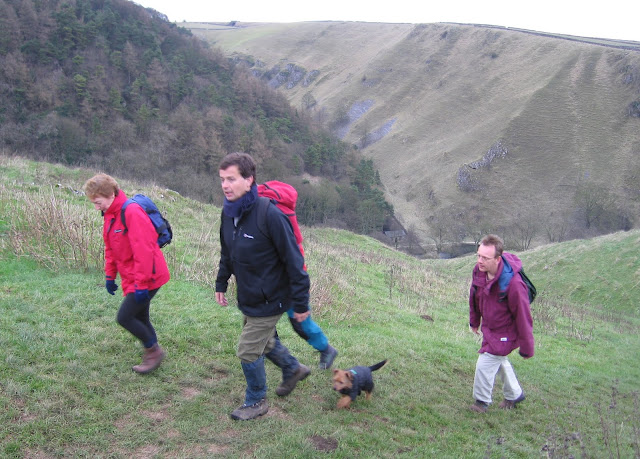 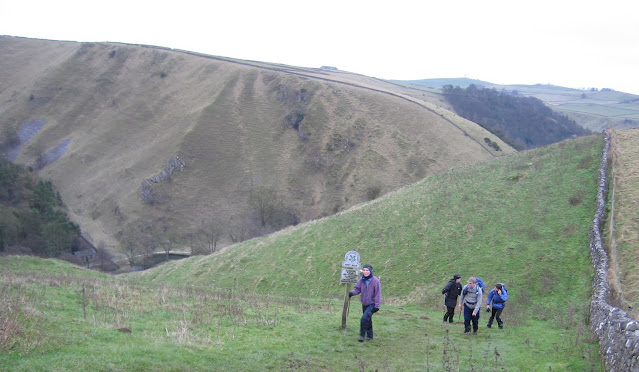 Planned timings were spot on as we reached The George at exactly 12 noon.
Mike was persuaded to reluctantly remove his boots - the rest of us were quite happy to leave ours on the newspaper laid out in the porch. John, Fliss and Jess tried to take their places at the three reserved tables, but unfortunately, as well as being a 'no boots' zone, the George is also a 'no dogs' zone, so they had to eat their lunches in the porch.
The rest of us tucked into quite reasonable pub grub ~ £6-8 a head, and enjoyed a leisurely 1.5 hour lunch. Trip planning was not really discussed - times have certainly moved on from the days when Dave, Laurie (RIP) and I spent a happy hour in the Monsal Head Hotel mulling over the forthcoming year's trips! These days Laurie is too busy doing the quickstep, and Dave is playing bridge and the recorder. Emails and the internet are utilised for our planning needs. 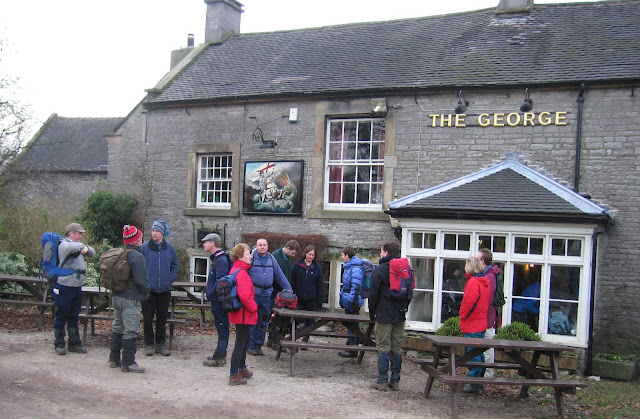 John and Fliss, cool in the porch despite hot chocolates, left soon after 1 pm, but the rest of us eventually ambled off [this was before the days of the quiz] at 1:30 and spent two and a quarter hours returning across fields to the River Dove (we briefly lost the path and headed too far north - nearly losing GS in the process), and on to Hartington via Biggin Dale.

There was a light mizzle for much of the time, but that didn't stop another cake break, and my lack of waterproofs (the forecast had been good) wasn't a problem.
We disbursed homewards, or to the cheese shop, after this very pleasant stroll."
Here's the route - about 16 km with around 500 metres ascent. 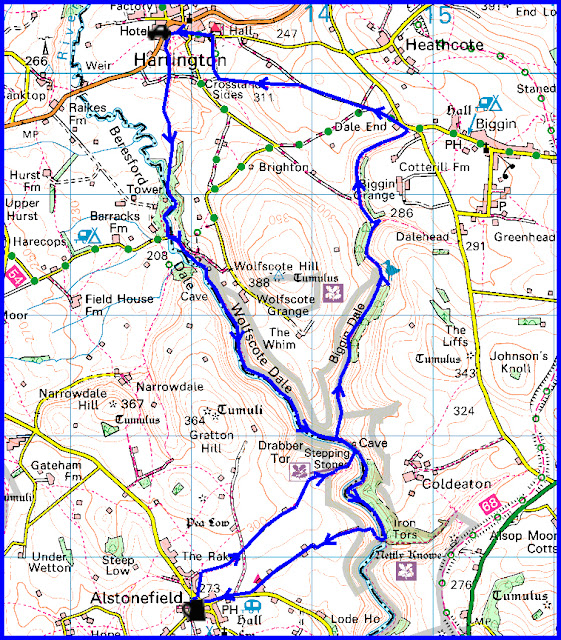