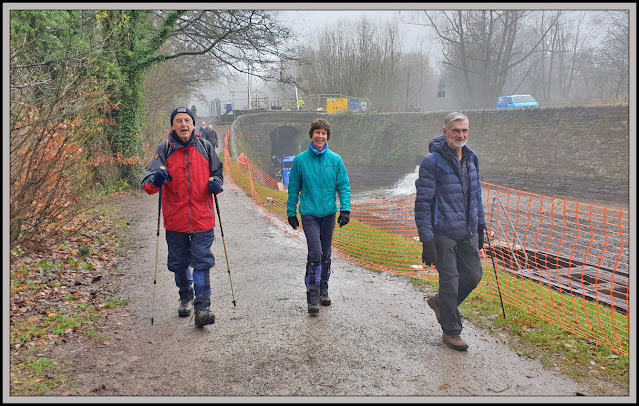 Graeme and Graham joined Sue and me on this overcast but dry morning, for a short walk from Marple Bridge. Commuting seems to have returned to normal, with the free car park next to the Midland Hotel just about full - commuters having taken the train into Manchester.

The canal is closed at present. Men were at work on it, and large explanatory notices informed us as to the project generally. (Click on the image for a better version.) 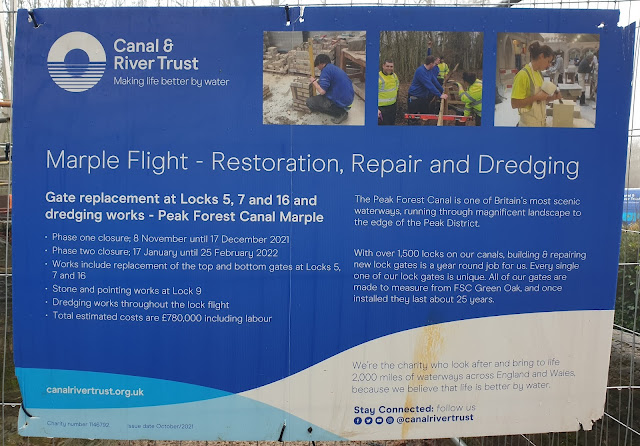 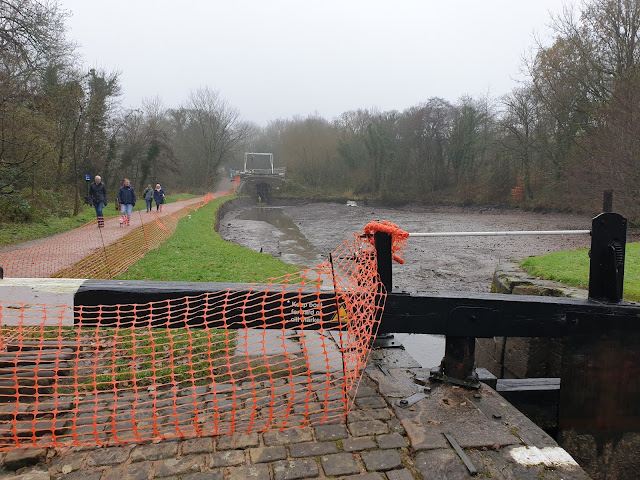 A little further on, the canal was full of water, but obviously not navigable until the end of February. 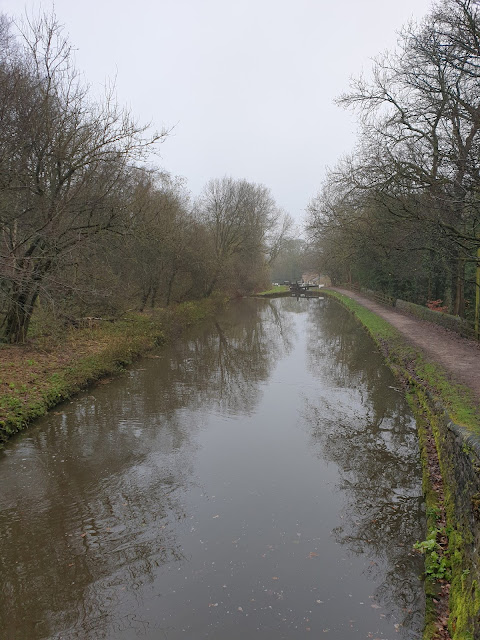 We followed the towpath over the impressive aqueduct that was opened in 1800. The rails on the far side are a very recent addition, and the whole structure shows signs of having recently been 'serviced'. 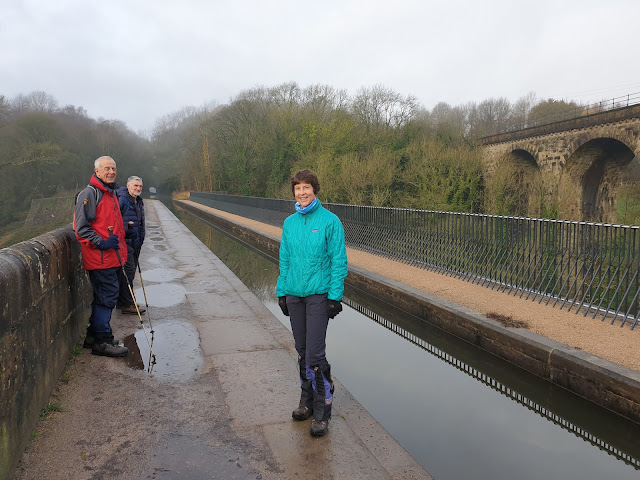 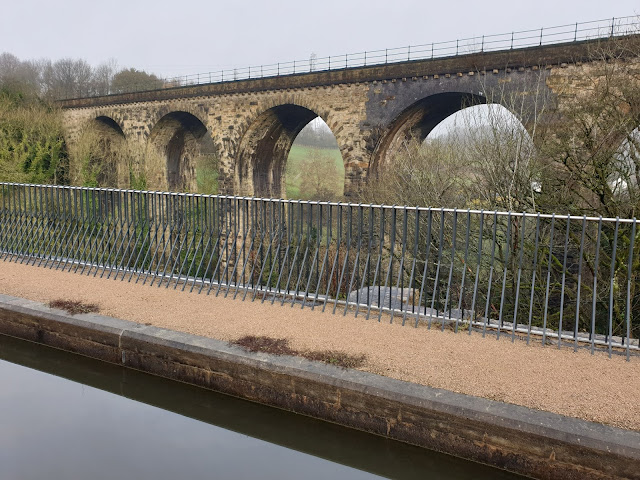 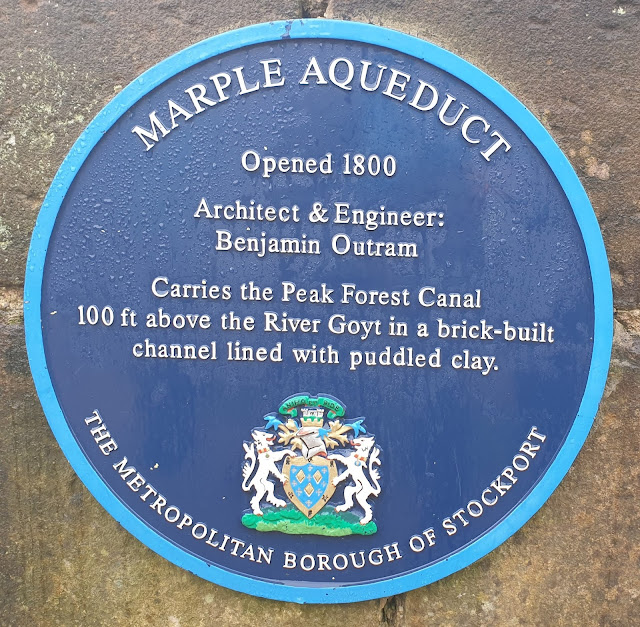 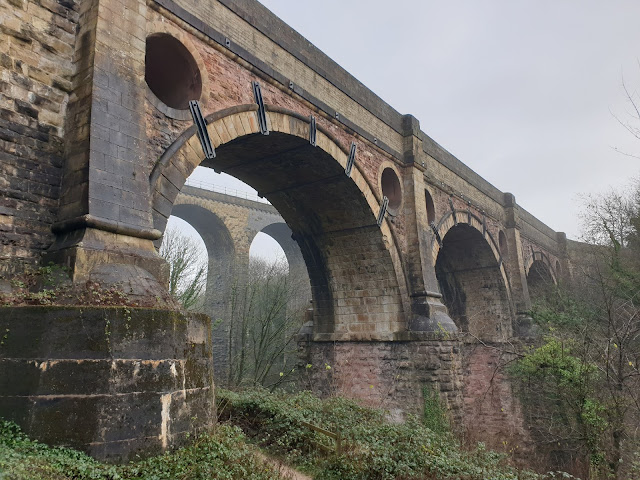 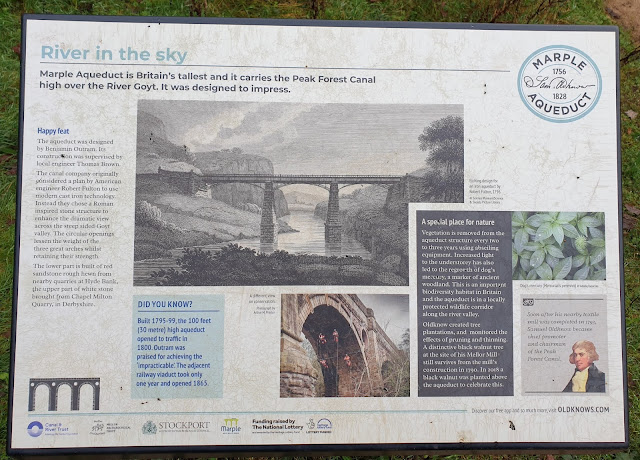 In the above pictures, you can see that the aqueduct, impressive though it is, is somewhat dwarfed by the more recent railway viaduct.

With no flowers of note to photograph, this fungi is all I can manage by way of 'Natural History' in this posting. 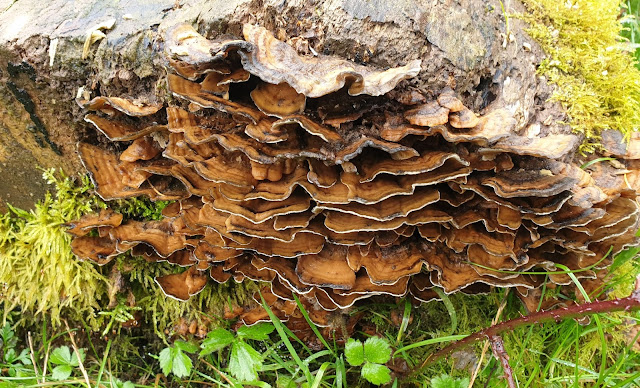 The path under the aqueduct and the viaduct leads muddily up a slope then down to a farm, then through more mud to a lovely footpath beside the River Goyt - quite full after recent rain. 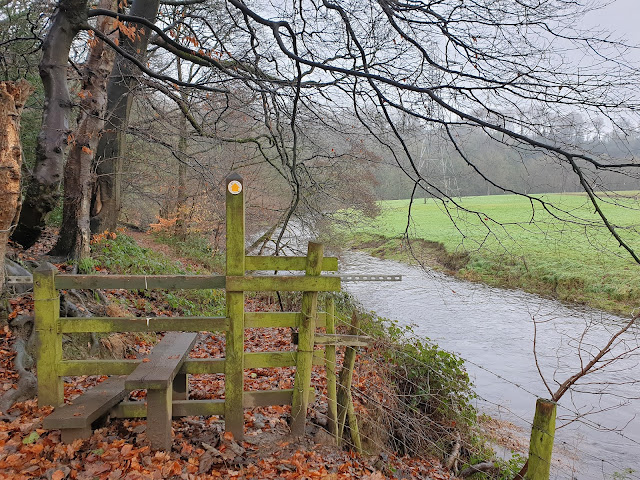 A diversion into Etherow Country Park had us sitting on a bench with our flasks and goodies, trying to decide whether we were being courted by a Pink-footed Goose. We weren't. Despite its pink feet, this is a Greylag Goose. 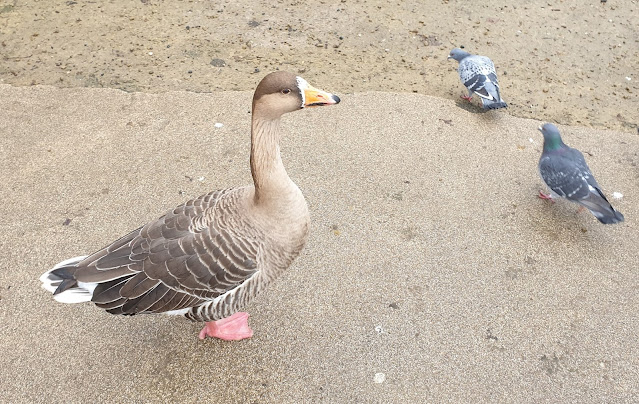 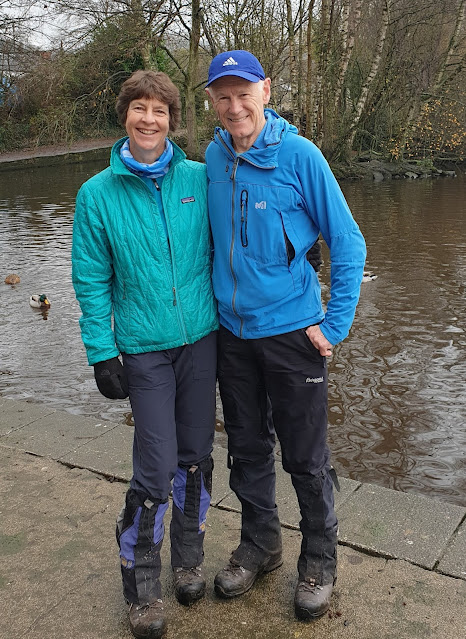 There's no doubt about the identity of this Mandarin Duck, despite the inability of my camera to cope with his contrasty plumage. 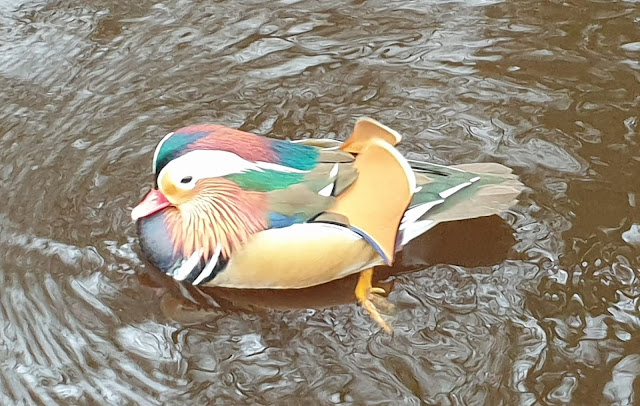 We walked in a figure of eight loop, before returning to the entrance. The bird taking off below is a Coot. 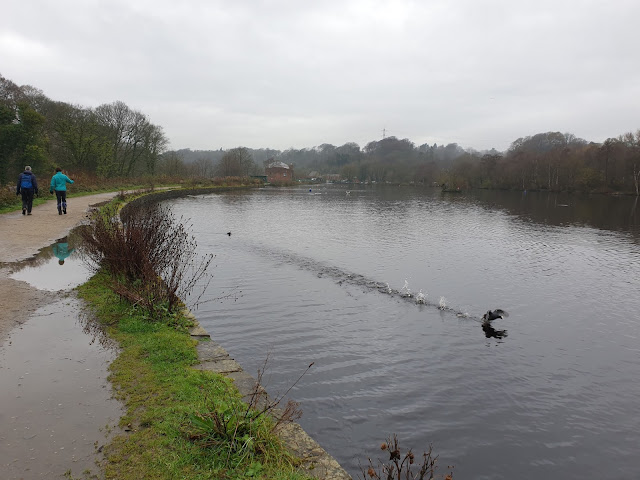 Memories of The George - a vibrant pub with a busy bowling green in its heyday - now consigned to being the home of a pet food supplier. 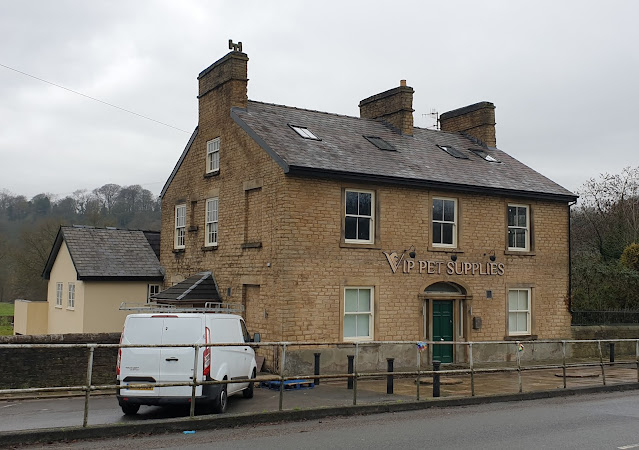 I've written about this early cast iron bridge before. If you click on the second image below you should be able to read all about it. 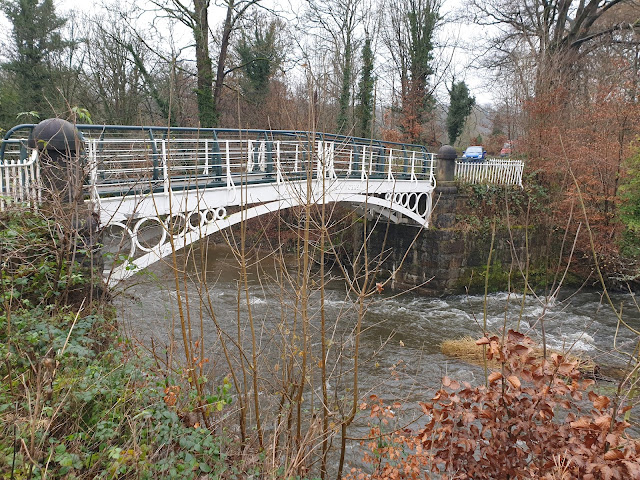 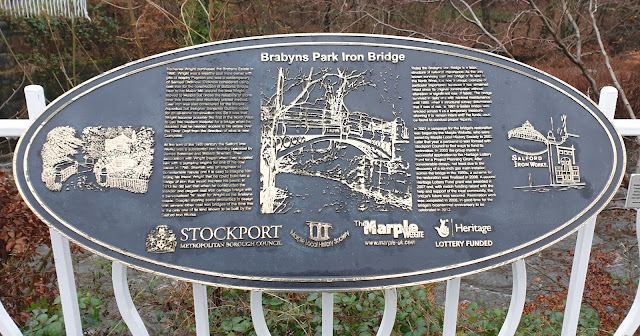 Brabyn's Park is the home of Marple parkrun - there's plenty of space for runners on the often muddy two lap, 5km, course - sections of which follow the River Goyt around the park's boundary. 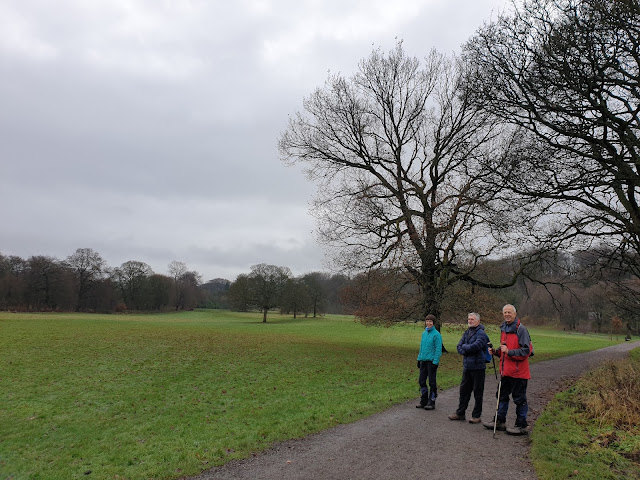 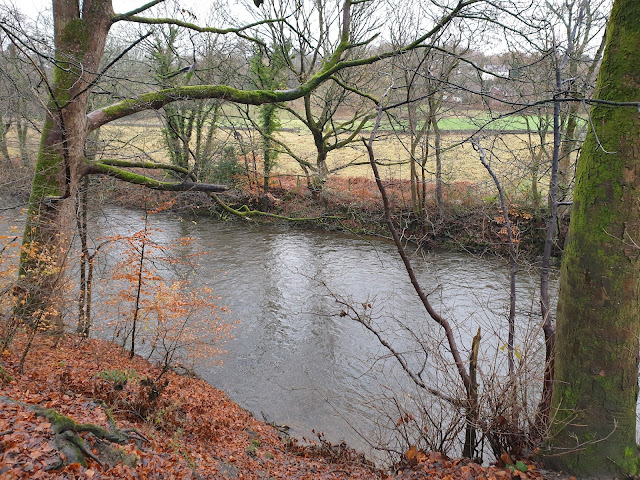 We finished the walk by going past a wall that used to have entrance back in 1905, when 'MAH' was involved. 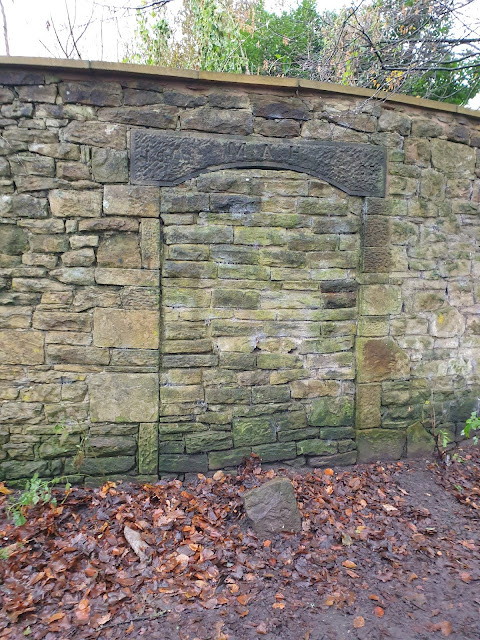 That was it, a gentle 8km stroll to brush off the cobwebs. It took us a couple of hours plus breaks. Here's the route. 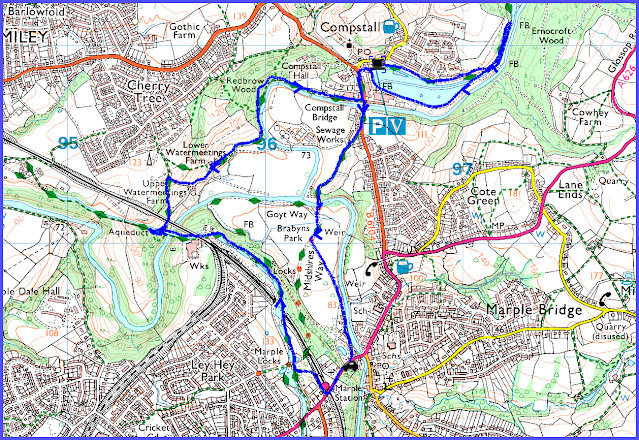 Next Friday - Around Burtonwood - here's the flier from topwalks.com:
Around Burtonwood
Meet at 10am at the Mucky Mountains Nature Reserve CP at SJ575944. Access via M62 jnc9, Winwick and Vulcan Village. Walk about 10km.
Posted by Phreerunner at 13:47

What a start. I found the canal at Marple and marched off determined to get in some quick miles, so it was a a bit heads down for a couple of hours until I came to a sign that said Disley. I was on the wrong canal, the Peak Forest instead of the Macclesfield. I hardly dare tell of this but there you are.

How embarrassing! Lucky that there's a decent shortcut from Disley back to the Macclesfield Canal.