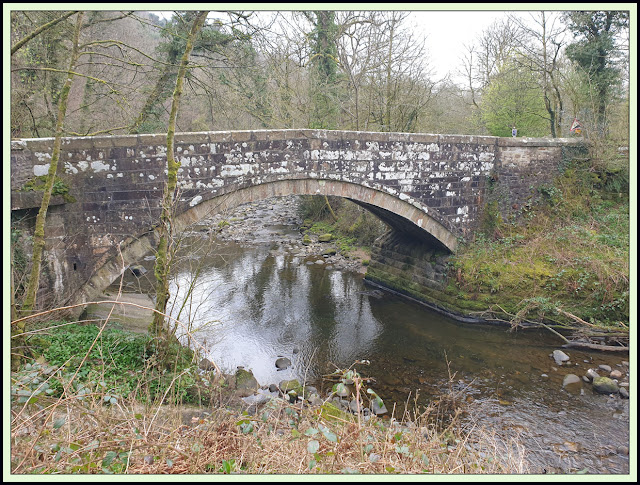 The bridge at Brook Bottom
This was another short outing whilst Kate endured chemotherapy in Preston. I parked at Brook Bottom, Claughton, where judging by the space and the signage an early start would be needed at a weekend or in the summer.

It was quiet today though, and the visitor centre at Beacon Fell was closed apart from the toilets. I set off over a bridge and past Brockmill, to enter a meadow. With the river on my left I enjoyed the valley walk up to the scout camp that is adorned with activity areas such as archery, and there's a huge campfire pit. 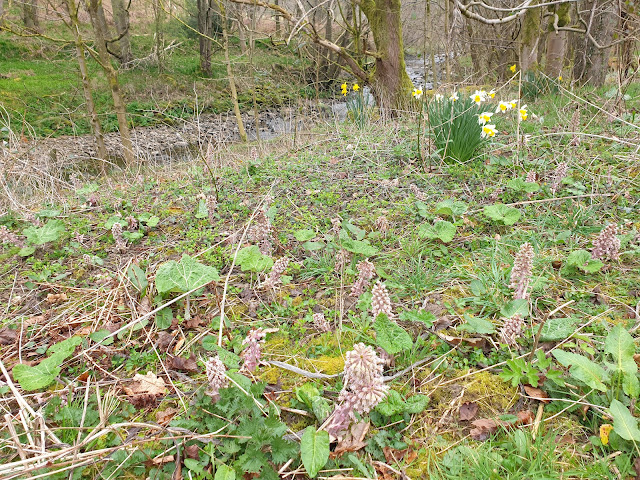 Butterbur and Daffodils by the river 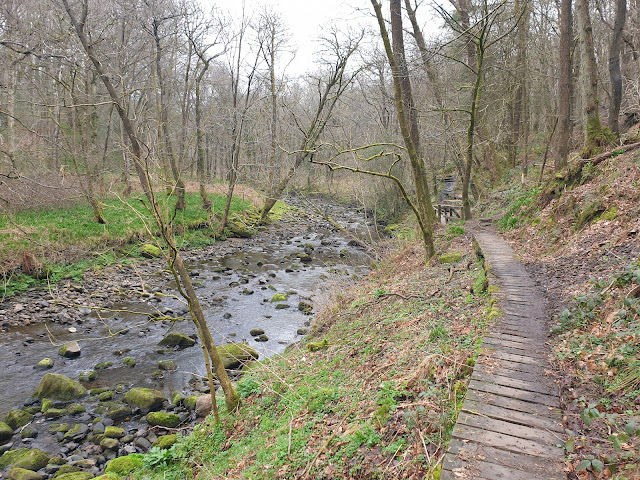 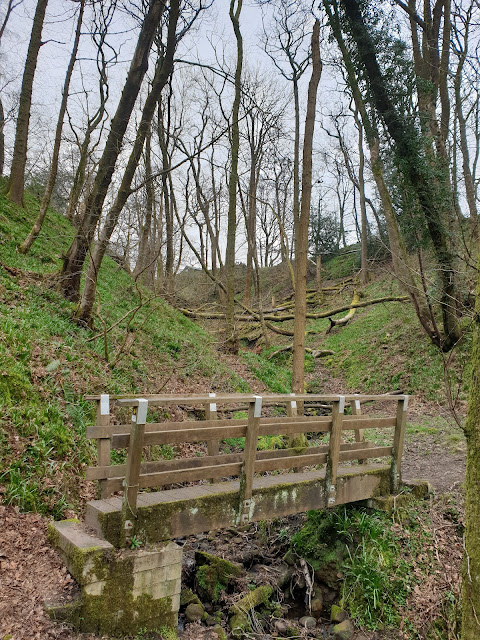 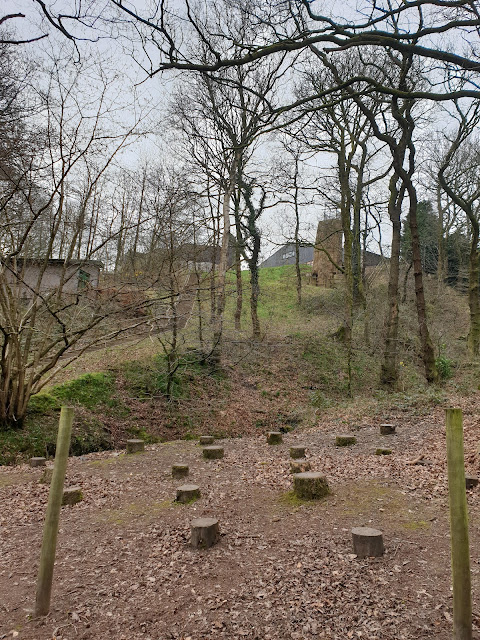 Scout camp
The route soon veered away from the river and began to rise past sheep and lambs on the slopes of Beacon Fell, to Heatherway Farm. 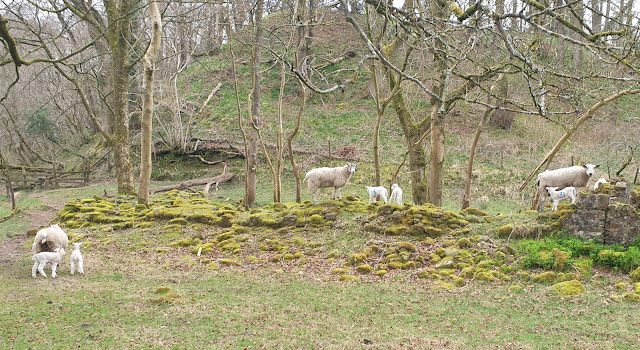 Looking back, the views to Parlick and other hills were disappointing due to the hazy conditions, albeit it was warm and dry and calm. Curlews, Lapwings and Pheasants were vocal in their presence. 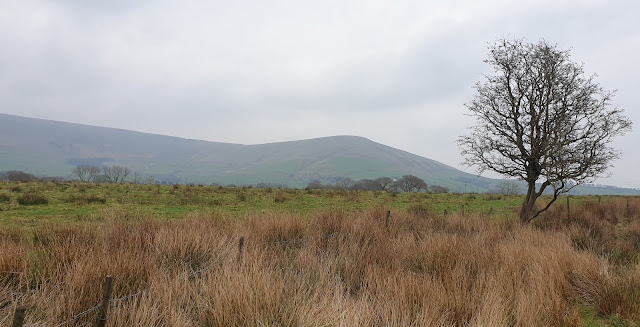 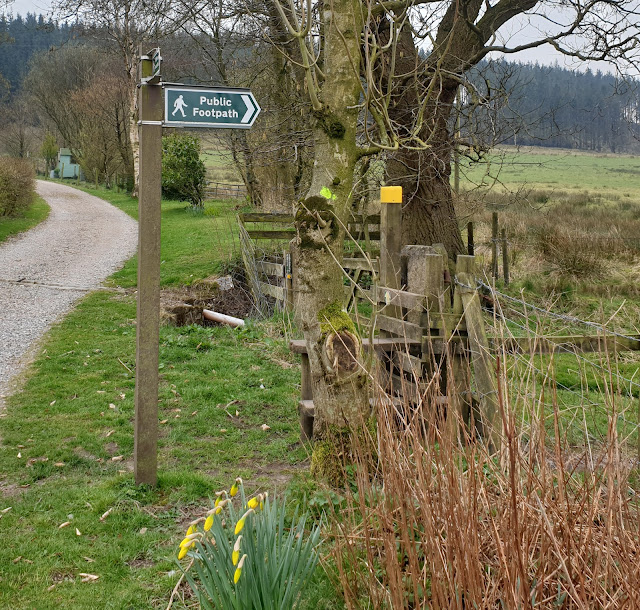 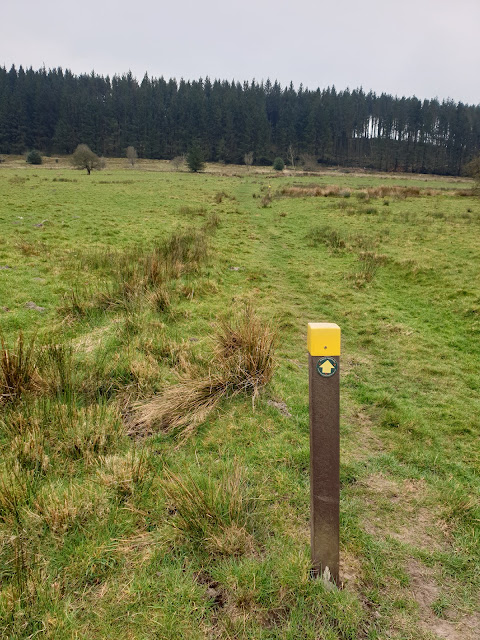 The nearby Bleasdale fells - Parlick and Fair Snape Fell - were simply outlined on the horizon. 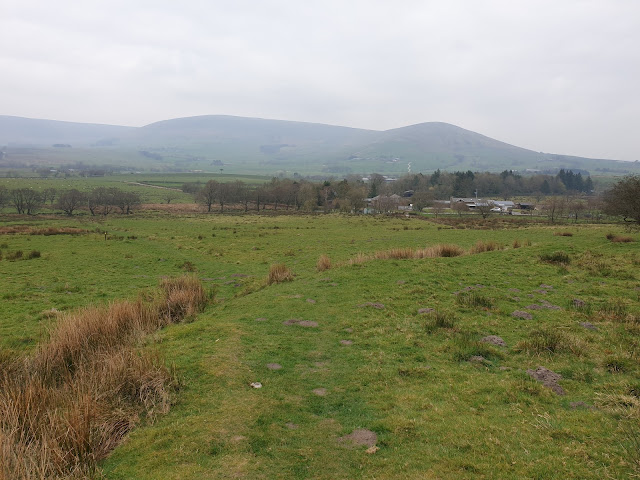 Recent storms had clearly taken their toll on the woodland that crowns Beacon Fell, but the blown trees have been dealt with and line a freshly bulldozed track that leads towards the summit. Red paint indicated 'storm' or 'chip' on some of the timber. 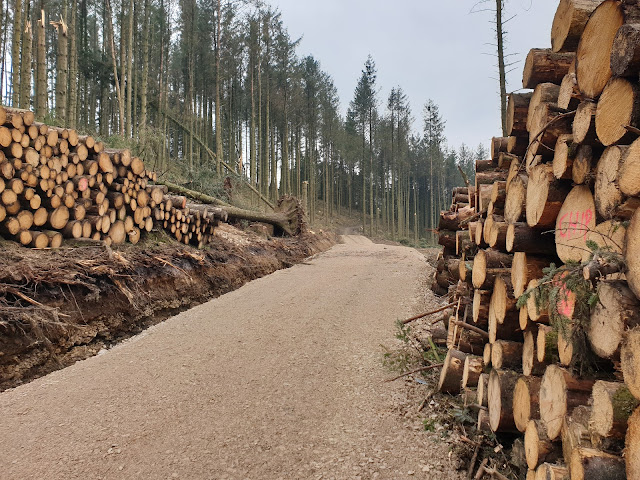 An alligator sculpture has been defaced by coins. Notices near the Visitor Centre requested that visitors restrain themselves regarding this activity. 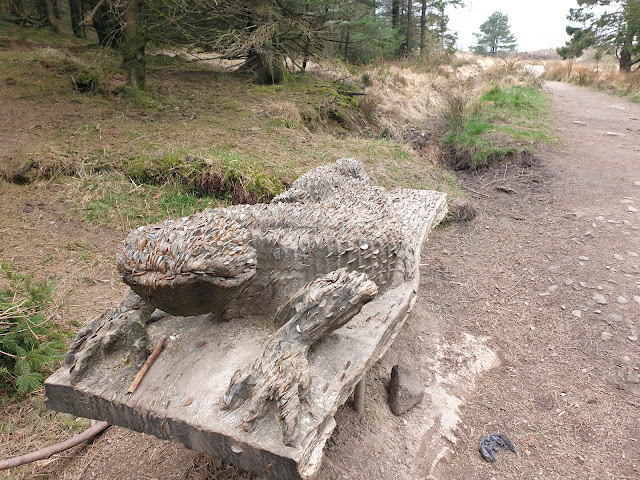 I enjoyed a leisurely lunch on the modest 266 metre summit, where hikers mingled with horse riders.The fell was home to one of a chain of beacons across the country that warned of invasion during the Spanish and Napoleonic wars. In 1970 it became one of Britain's first Country Parks. 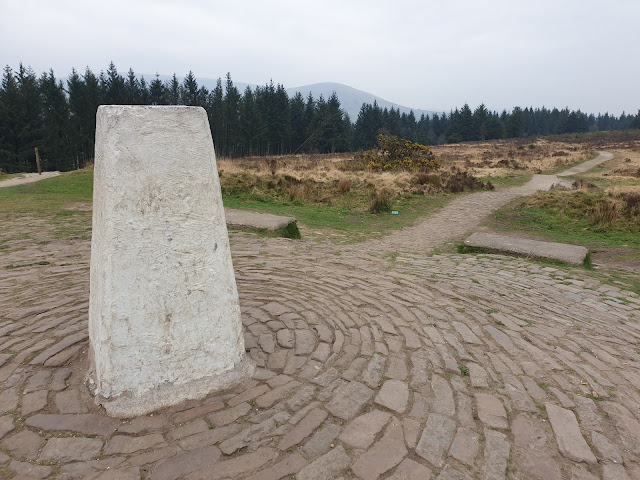 I descended past wooden sculptures to the visitor centre and then down a path that should have had views to the Isle of Man and elsewhere. However, that's 100 kilometres away, and the haze drew a grey line on my view at about 5km. 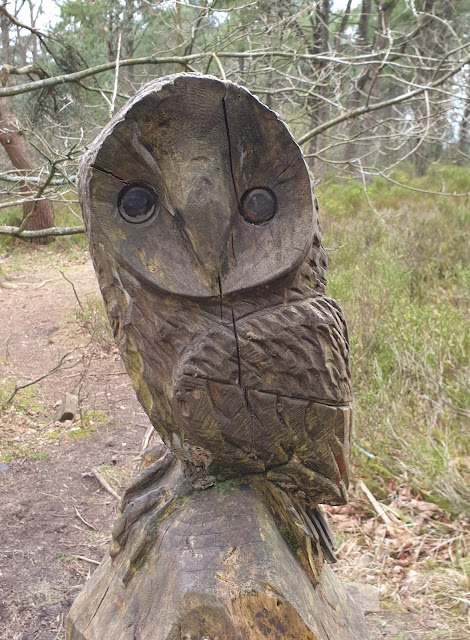 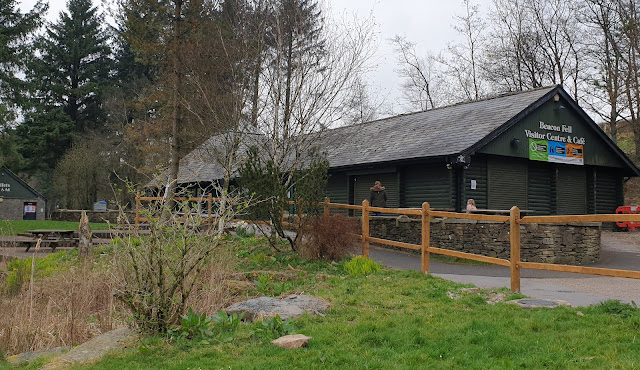 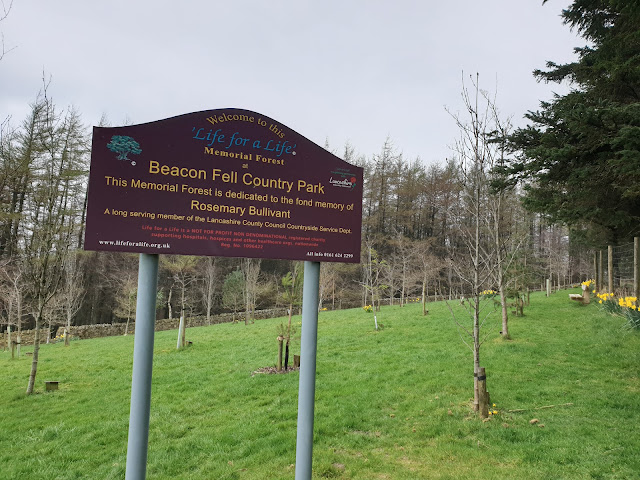 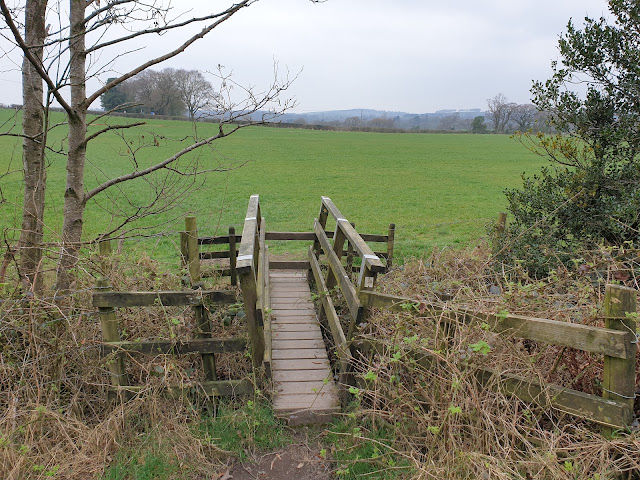 Looking back to the summit of the hill
I walked about 9km, with 200 metres ascent, in less than 2.5 hours. A very pleasant outing before a wait in bright sunshine outside Preston hospital, where two air ambulances arrived and a family of mallards laid claim to the ground outside the entrance to the A&E department. 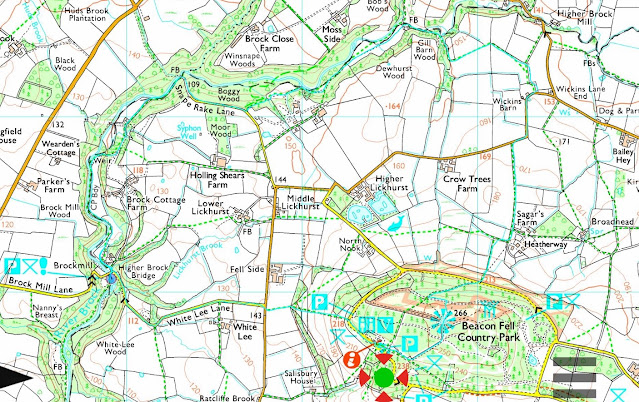 You can just about see my route marked in light blue, clockwise from Brockmill - click on the image for a better version
Note that BC did this walk earlier in March. His excellent report is here.
Regular readers may have noticed a 'hiatus' in transmission, this being my first posting since 13 April - probably the longest gap since I started blogging in 2007. This is due to some family health issues - my daughter Kate is now recovering (a long process) from chemoradiotherapy, and tomorrow my mum, Dot, will be returning to her home with us after nearly two weeks in a care home. A live-in carer, Regina, has been recruited for her, but after living alone for over thirty years, sharing her home may be quite a challenge. Meanwhile, we continue to enjoy the company of (very healthy!) granddaughter Isabella every Friday. All this has constrained the time and inclination for blog entries, but hopefully some sort of normality will soon be resumed...
Posted by Phreerunner at 16:09

A good walk, but never mind that - my thoughts are with you, your daughter and your mother. Let's hope for better times. BC

I sympathise with your problems and echo BC's thoughts. I have no doubt that for me anyway, and I'm pretty sure for you, that being fortunate enough to at least have regular day walks provides a valuable tonic.

With my best wishes for you all.

Thanks BC, and Conrad. Regular walks (except for exercising Oscar) have gone by the board for the past few weeks, but having got Dot back home and with a full time carer today, I hope to get into Lancashire tomorrow before a visit to my daughter.