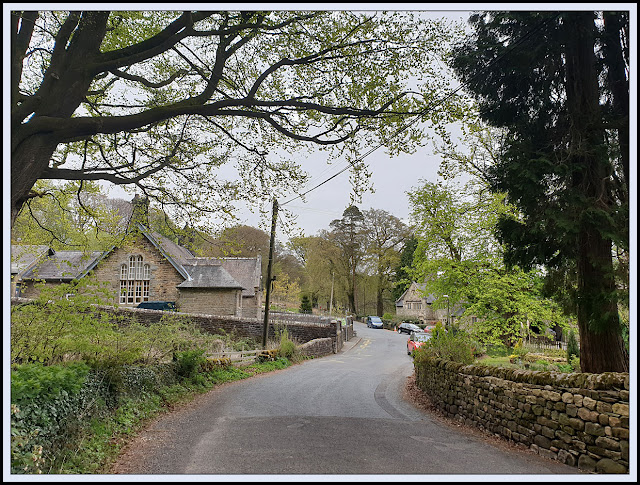 A Walk in Deepest Lancashire
Rather than start from Tower Lodge, as suggested by Mark, I parked opposite the school (pictured above) in Abbeystead. There's also parking on the right beyond Stoops Bridge, a few metres further along the road.
Abbeystead was the scene of a terrible disaster in 1984, described thus in Wikipedia:
The Abbeystead disaster occurred on the evening of 23 May 1984 when a methane gas explosion destroyed a waterworks' valve house, killing 16 people. A group of 44 visitors were inside the underground building at the time, attending a public presentation by North West Water Authority to demonstrate the operations of the station. Eight were killed instantly by the explosion, and the others were severely injured. The explosion also caused the concrete roof to fall down on to the group, destroying the steel mesh floor and throwing some of the victims into the water chambers below which rapidly filled with river water. Another eight people subsequently died of their injuries in hospital. An 11-year-old boy and his mother were among the dead. The official inquiry into the disaster concluded that the methane had seeped from coal deposits 1,200 metres below ground and had built up in an empty pipeline. The gas was then ejected into the valve house by the sudden pressure of water as the pumps were switched on. The cause of ignition has never been determined.
There's a plaque outside the Valve house that I missed. Walking back up the road on the cool, overcast day, I picked up a path leading to Abbeystead's small reservoir, below which a metal footbridge saw me safely across the Wyre. 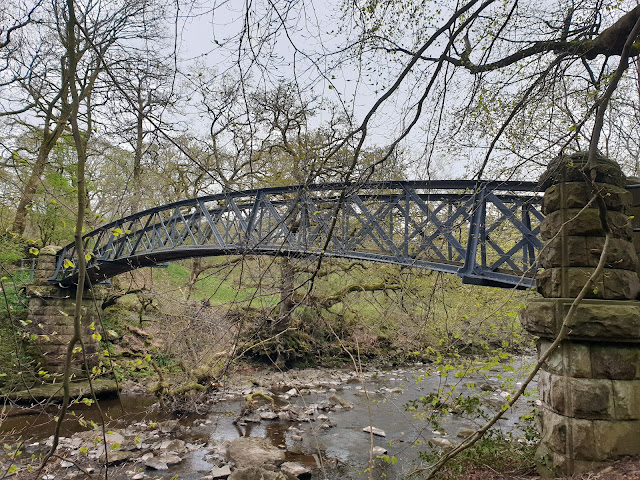 Ascending to the south of the reservoir, I noted a series of steep steps that may allow fish to climb into the reservoir instead of succumbing to futile attempts to mount the weir. 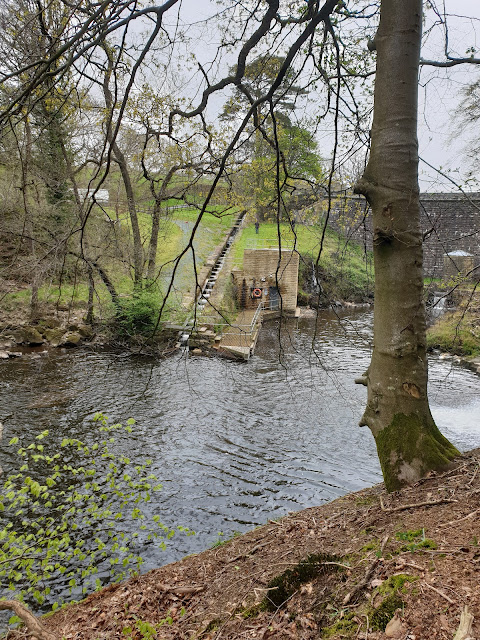 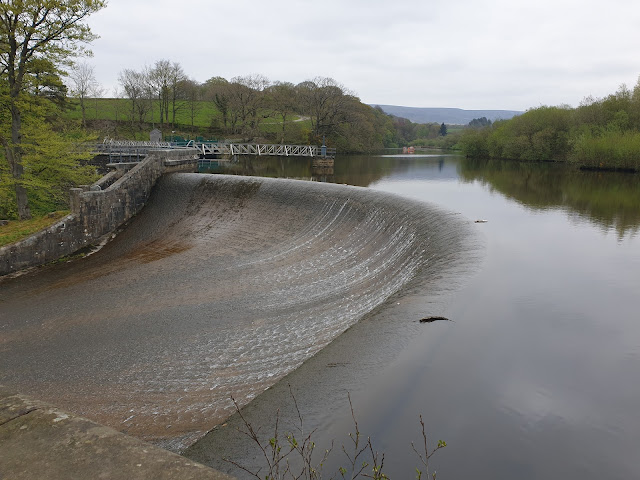 There followed a lovely woodland path past meadows full of Marsh Marigolds and Bluebells. 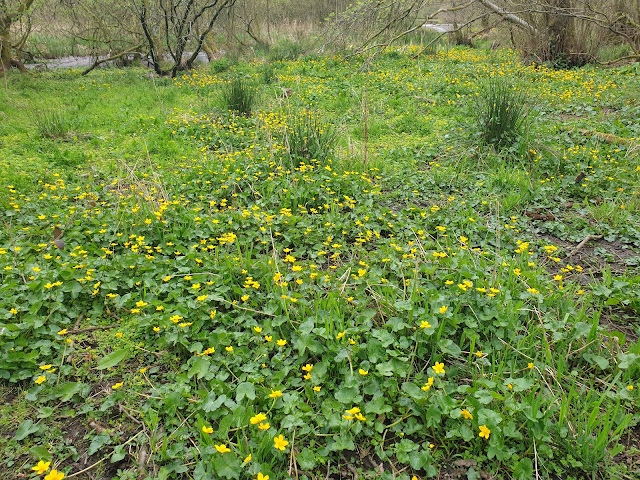 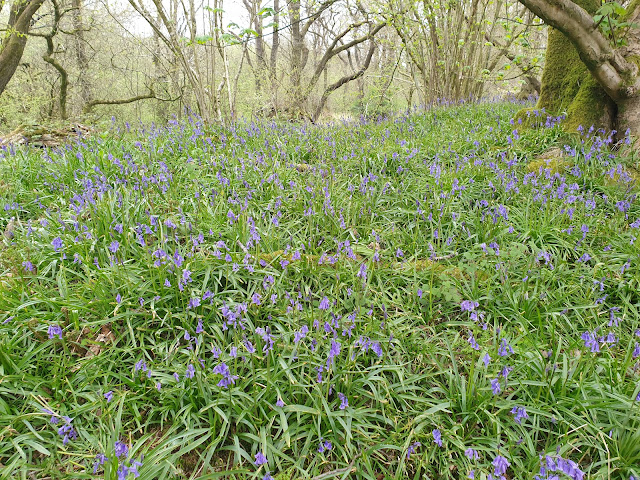 There were many other flowers here, with prolific Wood Sorrel and burgeoning Wild Garlic. After an exceptionally dry April, the mud that might be expected was completely absent.
Walkers on the Wyre Way are directed on a path that skirts around Abbeystead House, a shooting lodge built in 1886 for the 4th Earl of Sefton. The estate apparently holds the dubious privilege of having recorded the biggest grouse bag in a day - 2,929 birds were slaughtered on 12 August 1915. The 18,000 acre estate was bought by a Duke of Westminster family trust in 1980. Despite the numerous welcoming 'Open Access' signs in the area, sadly this is still a place where raptors such as hen harriers are persecuted by the likes of the gamekeepers employed by this estate. 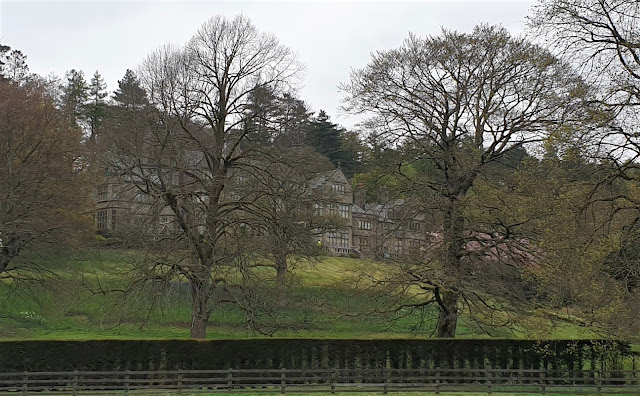 The Upper Wyre Way, today's route, is marked at frequent intervals by engraved stones next to the path. 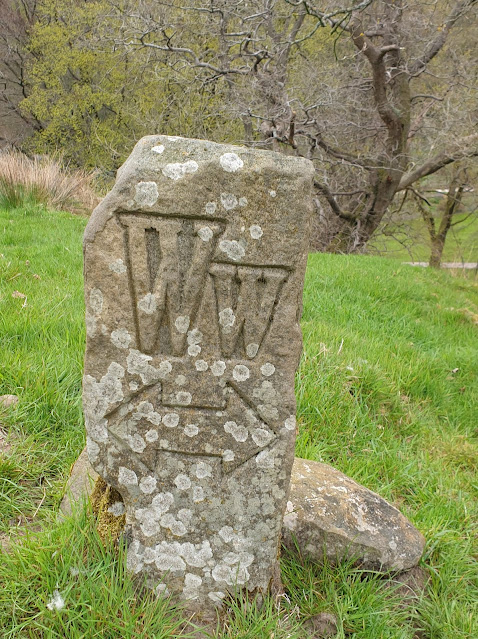 The stone in the picture above is seen in the bottom left corner of the next picture. 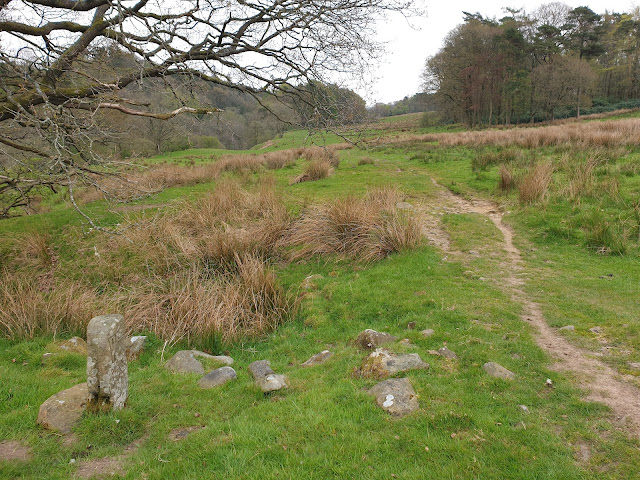 The next marker (below) rather confusingly suggests a route crossing the river by a footbridge. My route ignored this and continued in a direction just south of east. I have discovered that whilst Mark Sutcliffe's walking routes are pretty easy to follow as he describes, he does insert directions that from time to time benefit the walker who has taken the trouble to have a compass to hand. So I intend to adopt that policy in future, as well as having the .gpx track provided by Cicerone on my phone. 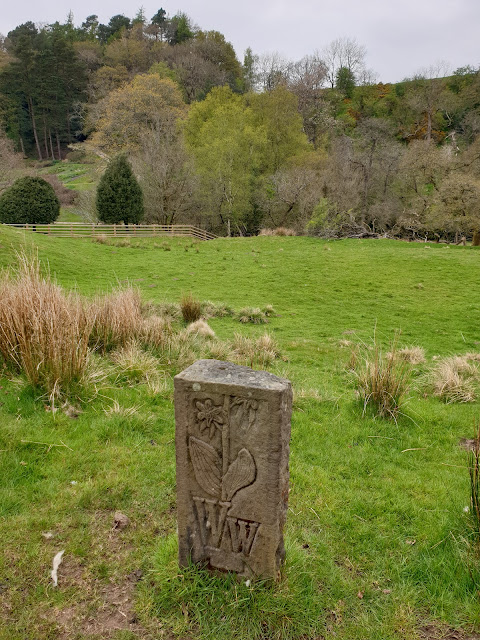 Marshaw Wyre is reached and the walk continues up a quiet road in Forest of Bowland scenery that has a Scottish feel to it. An elderly couple were enjoying a similar route (their navigating skills were problematic) to me, but they weren't finding the signs very easy to spot. Tower Lodge, near the large layby from which Mark suggests starting this walk, heralds a gentle climb up a lane to leave the track by a new plantation. 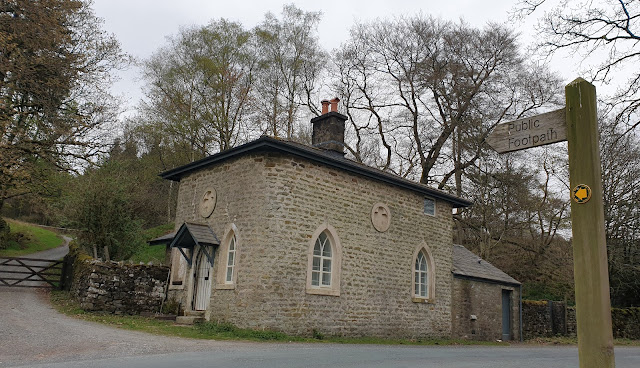 I walked through the plantation on the obvious path shown below. Wrong. I should have gone more uphill to the right. 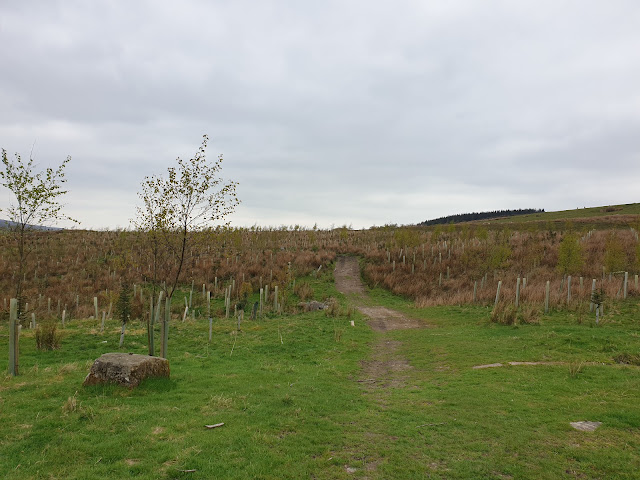 My error was easily remedied, and a gate and a field or two later brought me to a distinctive ladder stile that confirmed I was 'on route'. There were numerous distinctive plovers (peewits), oyster catchers and curlew around here, so care was taken with foot placements! 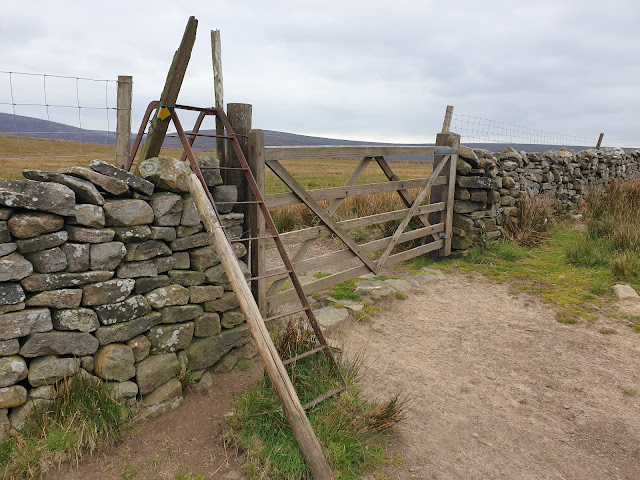 From there, the path vagely followed a wall to the north, reaching a farm after passing between two outbarns. 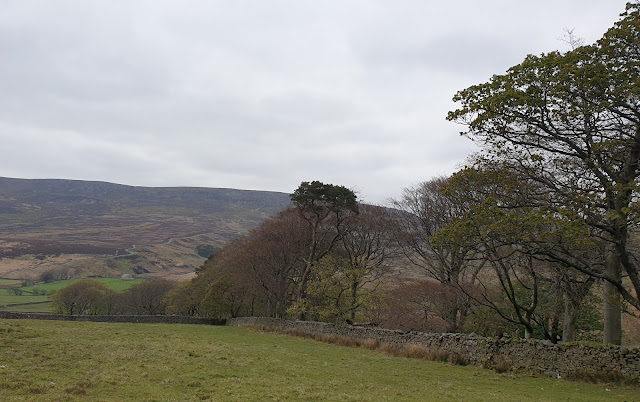 A farm track/lane led to the quiet hamlet of Tarnbrook, where an old wooden sign indicated that the Wyre Way has been in existence for some time. 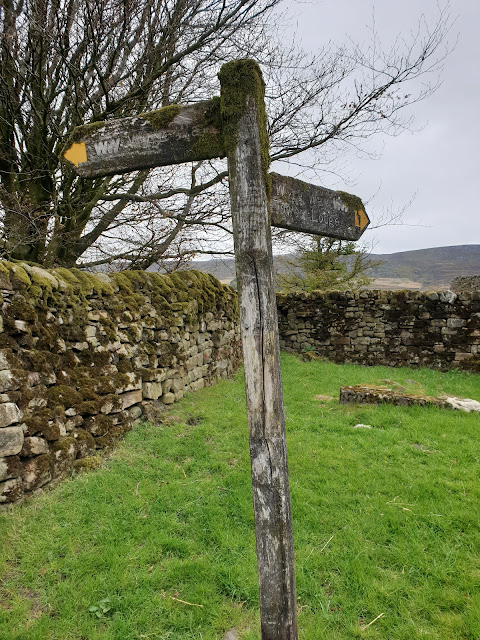 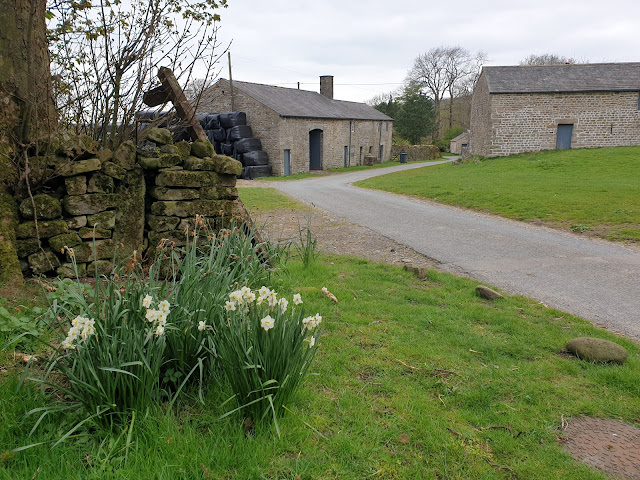 The footpath signposted above then took me across an assortment of fields and past a large outbarn that is pictured below in the distance ahead. Near here I met another couple. They were surprised to encounter anyone on this path today. 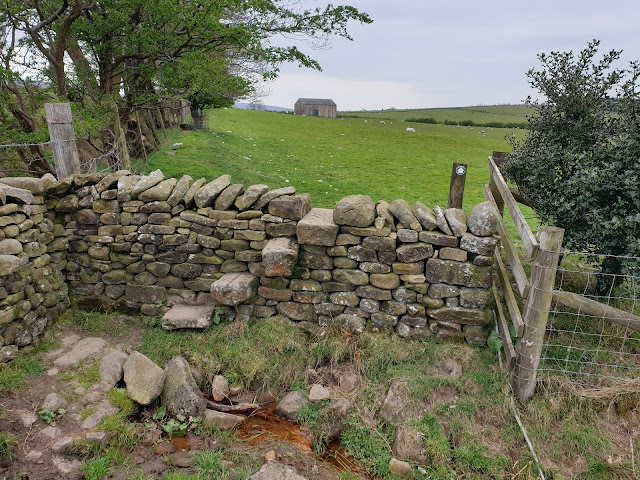 The Wyre Way signs can be a little confusing at times, given that there seem to be alternatives on offer. At the point shown below, I headed straight on to the far left corner of the field, where a path through someone's back garden brought me out at a road, and a gentle descent back to the school in Abbeystead. 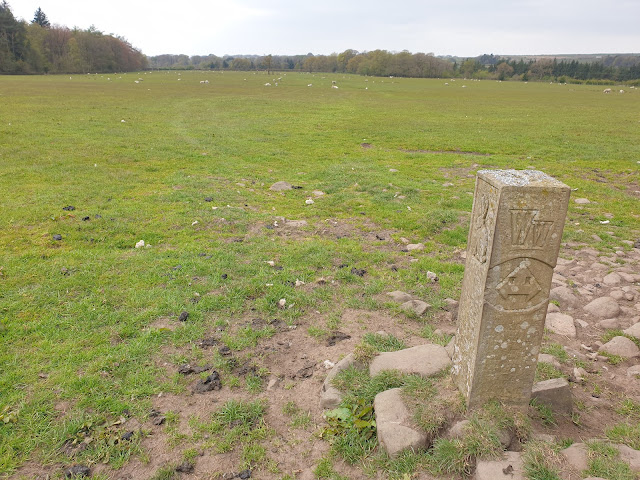 This was a pleasant outing, despite the cool overcastness, and my only proper walk in April. It was about 14km, with 250 metres ascent, and took me rather less than three and a half hours. Click on the next image to see a better version. 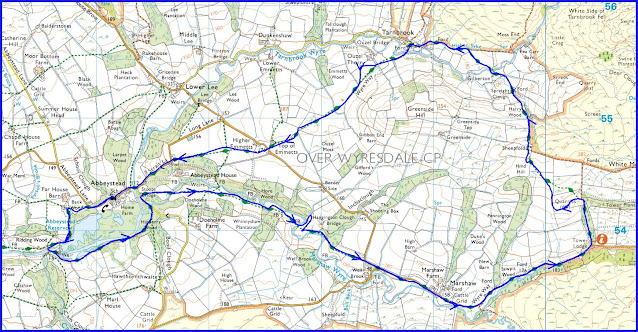 An hour's drive found me back in Bacup, on dog walking duty with Oscar, who seemed very pleased to see me as I go a bit further with him than some of his other walkers.
Posted by Phreerunner at 09:18

That area has its own special appeal. Tarnbrook is the back of beyond. You did well to fit the walk into your tight schedule, the roads aren't the best.
I did a similar walk from Dolphinholme are few years ago. ttps://bowlandclimber.com/2014/07/24/the-wyre-way-up-to-the-two-bowland-sources/
I keep coming across The Wyre Way on lots of walks north of Preston, it's worth looking at other stretches of it.
Regards BC

I walked the whole length a few years ago in day walks. The last section after taking the ferry from Knott End I did with Bpwland Climber. There was plenty of interest all the way. A little classic LDP I reckon.

Thanks BC, and Conrad. Hmmm, maybe a little Wyre Way outing can be planned.
I did intend to caption this 'A Walk in Deepest Lancashire'. I'll edit accordingly.

Back home early today - the Ramsbottom (Walk 28) outing was abandoned in favour of taking my daughter shopping!