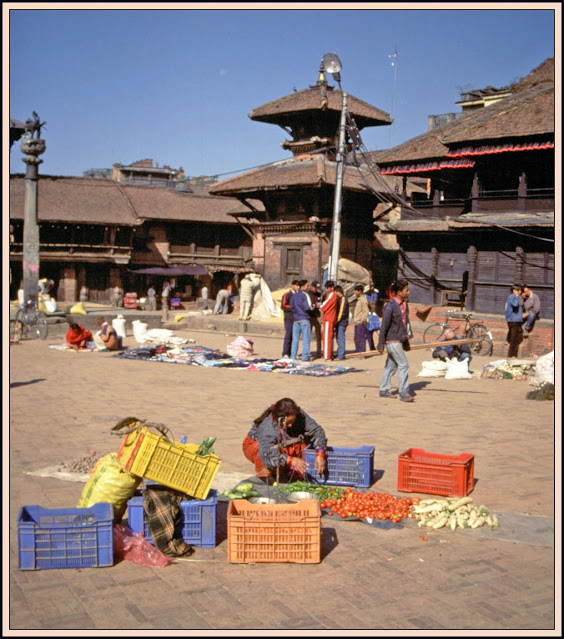 Tuesday 2nd of November
A day in and around Kathmandu

[Diarist: Sue]
The 7am alarm failed to wake either of us and at 7:40 we had to jump out of bed for breakfast at 7:45! It felt rather like the middle of the night that it was in . Buffet breakfast at the Radisson, then Sanjeev introduced us to Shiva, our guide for the morning.

Leaving at 8:30, in the morning sun, the minibus fought its way through rush hour traffic to travel the 10 miles east to Bhaktapur. The road climbed slightly to provide views of snow covered Himalayan peaks. The town is medieval and is known for ornately carved buildings, as well as for its temples. 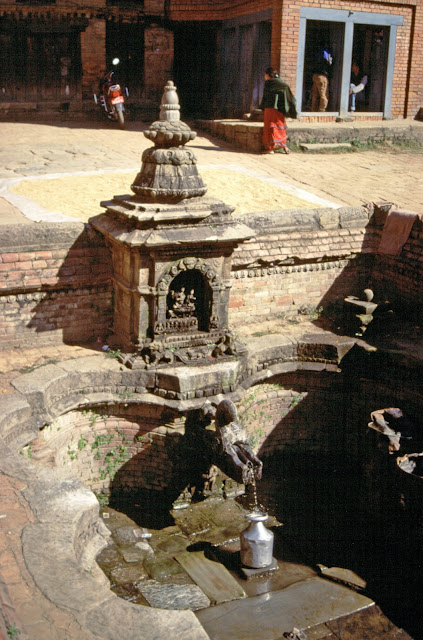 Strolling slowly through the bricked streets, we observed women drying rice in the sun by spreading it on tarpaulins, then raking a thin layer off the top to allow rice beneath to dry. 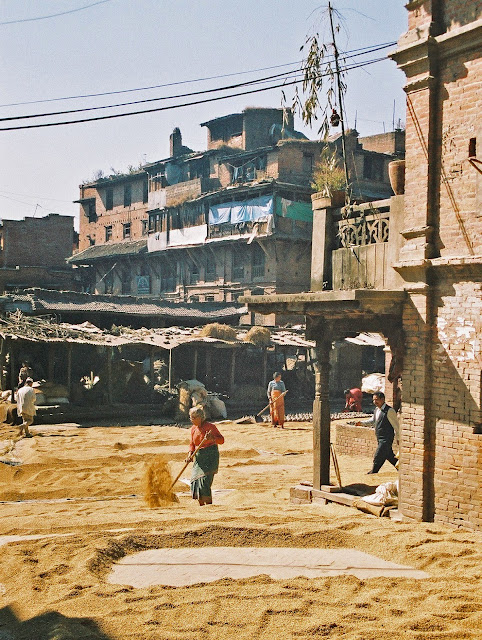 There were potters, making jars, and tiny dishes for butter lamps, and drying them in the sun.

A lovely open square () has a 5 tier, pagoda style temple with steps leading up, lined with stone figures of animals. The priest house had been converted into Nyatapola Café, and opposite was another temple, the Bhairab Nath, with its gold roof. Bhaktapur's (meaning 'King's Palaces') was wide and uncrowded. 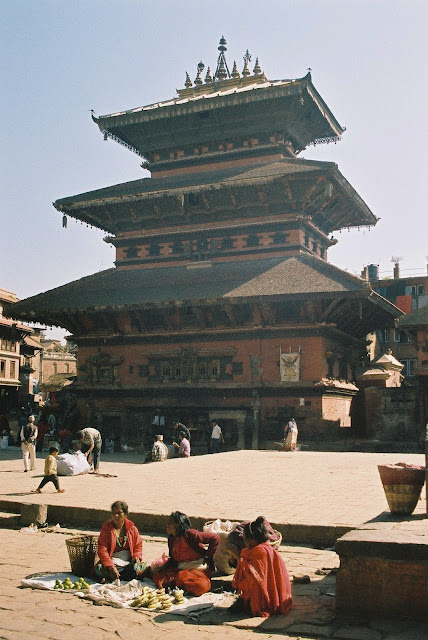 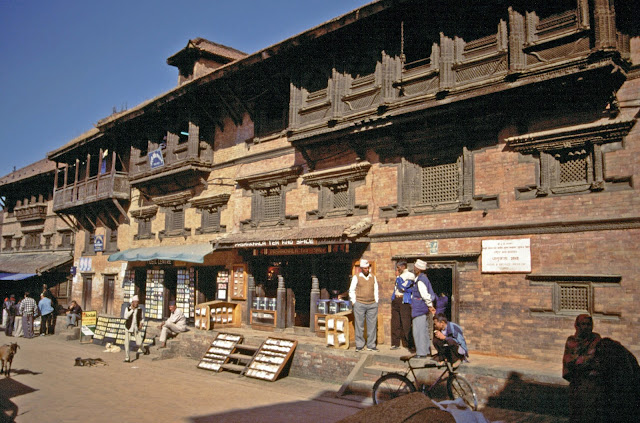 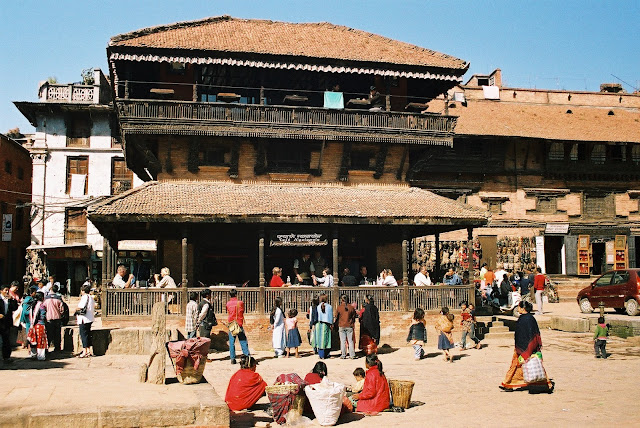 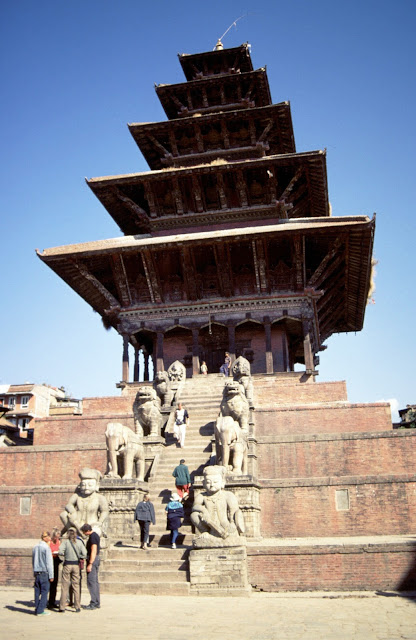 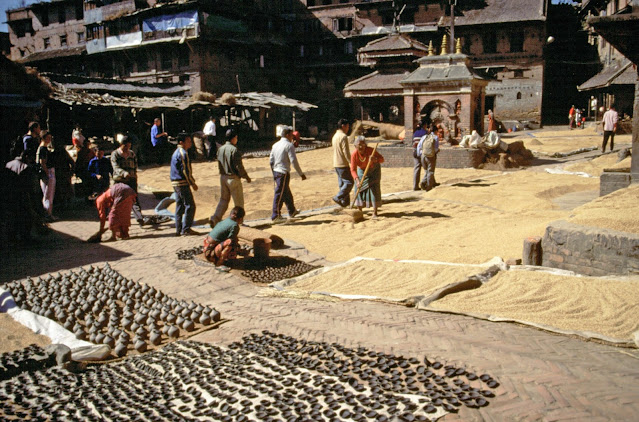 The few hawkers around were left behind as we entered the peace of the 55 windowed Palace, where a view of the sacred interior was obtained from an ornately carved doorway. Nearby was a pool, sunken and green, with a couple of bronze snake statues and surrounded by stone snakes. A statue of King Malla, whose 15th century fortifications dominate Bhaktapur, towered in the square. All around Bhaktapur were the petals of Hindu offerings, and the smell of incense. 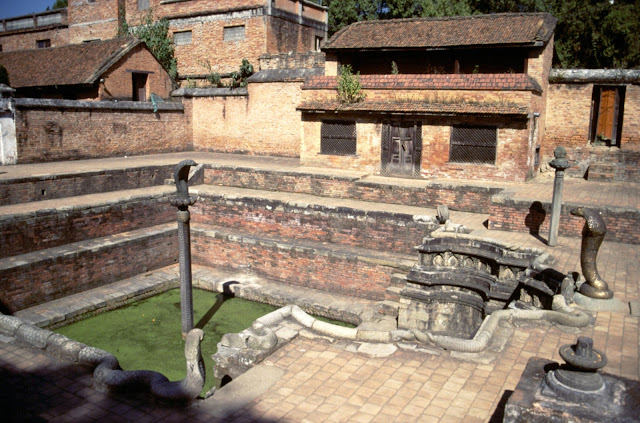 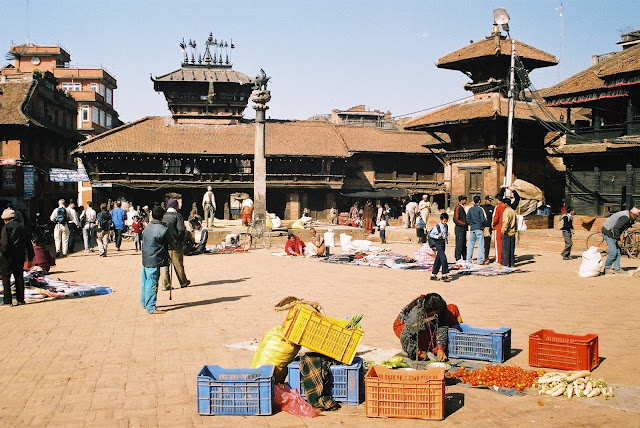 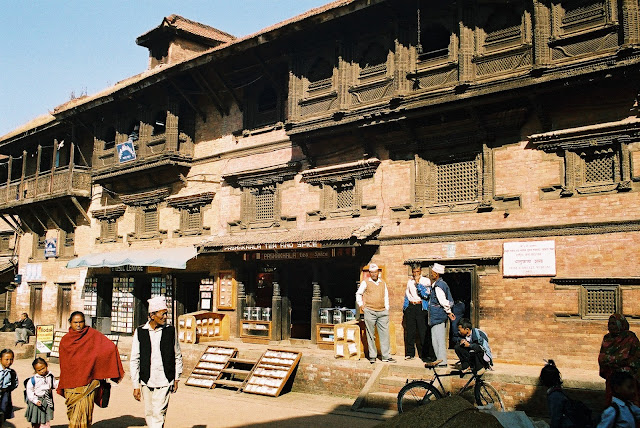 During the drive back, shopping was available, but none of us wanted to buy. It was a short stop.

After returning to the hotel at around noon, I braved the cold outdoor pool on the 5th floor, the attraction being a swim above and beneath the blue sky. The Jacuzzi warmed me up.

Had lunch in the hotel - buffet style, with some excellent puddings.

At 2pm, Sanjeev started his briefing on our trek. This was done in the outdoor bar on the 5th floor, with a wide panorama of the hills around the city, over which flew the occasional bird of prey. He informed us about money, tents, a typical day etc, and gave us maps of the area. All of us were pretty excited by the end. 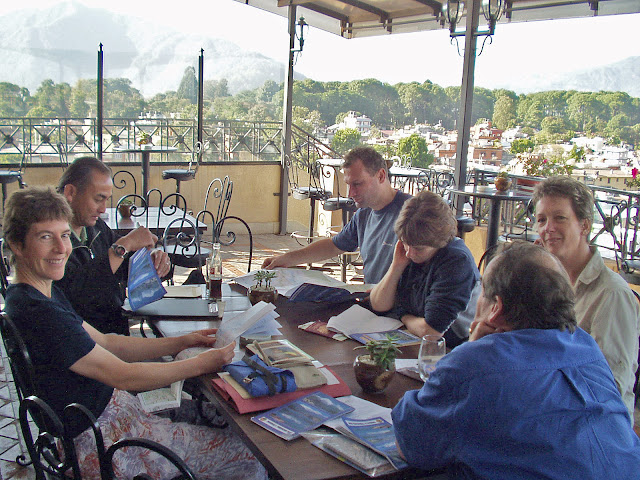 A walk to the Thamel district next, with Sanjeev to show the way to Shona's, supplier of outdoor gear. Here, Mary had ordered a down jacket and paid around £30 for a garment similar to ones that had cost the rest of us around £150 at home. [Martin and Sue still have these wonderful jackets that were purchased for this trip - ed.] I bought a fleece for my nephew, Jacob, and the others made various purchases.

The Thamel district is the shopping centre and was a hub for tourists. Good natured encouragement to buy goods came from the shopkeepers. Large signs hang from the shops, making the area colourful. Becaks are pedalled along the narrow streets, so you had to watch your back.

Our route there and back involved risking limbs to cross the roads, busy with buses, motorcycles and vans, as well as cars and the odd cow.

There were also fruit bats hanging high in the trees at the road edge - they were very large.

In the hour back at the hotel between 5:30 and 6:30pm, our new black and red kit bags [still in use - ed] were packed. These will be carried by porters, with us carrying day sacks.

After dark, with slightly quieter roads, we returned to the Thamel district and had a meal at the Third Eye. Our table in the back was in a dimly lit room and we sat on cushions - easier for some than others. Nice meals of currys and naan breads, and Everest beer. Afterwards the streets were still busy and the neon lights were quite a sight.

An early night was called for as we must wake up at 6am from tomorrow onwards. Our TV brings the latest about the election between Bush and Kerry - long queues at polling booths.