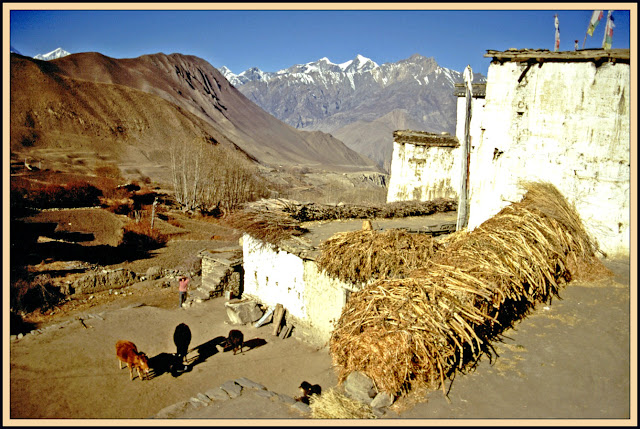 Sunday 14 November
Muktinath to Kagbeni
Itinerary: DAY 14 Kagbeni (2,804m) We descend towards the through the fortress of (3,612m) back dropped by . Passing the barren landscape with dotted patches of green cultivation we arrive in Kagbeni, a former trading post on the way to Mustang and . (3 - 4 hours walk).

[Diarist: Sue]
Back to 6 am wake up call - it seemed particularly dark this morning. A frosty but clear morning again. The usual porridge then puris and omelette in a chilly mess tent. Feet were cold by the time we set off. 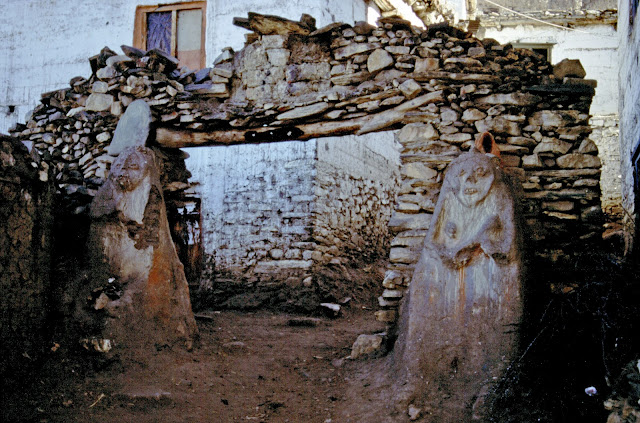 Gateway to Jharcot
In about half an hour the trail reached Jharkot, a ridge upon which is perched a 550 year old monastery. Inside, it was similar to others, with prayer books, paintings, statues, incense burners and drums. The most interesting aspect was the Tibetan doctor (known as an 'Amji' or 'Amchi') and his herbs - jars containing powder, labelled in Tibetan. He uses between 3 and 35 herbs to treat a patient. Next door were shelves of dried herbs and a few other things such as dried fungi and calcium carbonate rock. A third room contained a display of herbs, and posters in English about Tibetan medicine. The doctor trained for 9 years and is training another. He goes off for 1 to 2 weeks at a time to collect herbs from the mountains. 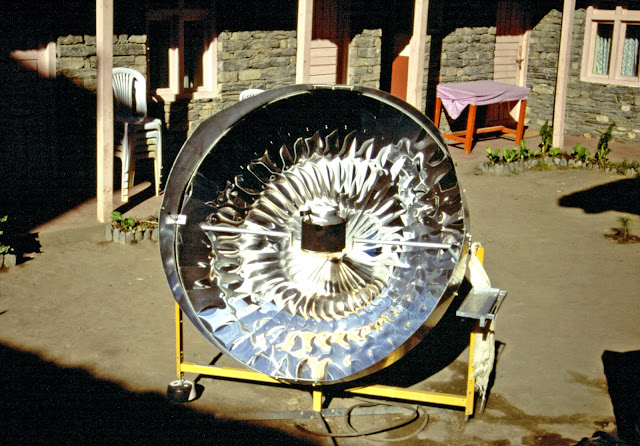 Young boys training to be monks were getting up as we arrived, and the place was lively as they brushed their teeth in the main courtyard.

Continuing, the trail descended by irrigation channels and stone walls into the open and brown valley. By the time we stopped at the 'Romeo and ' it was very warm in the sun. 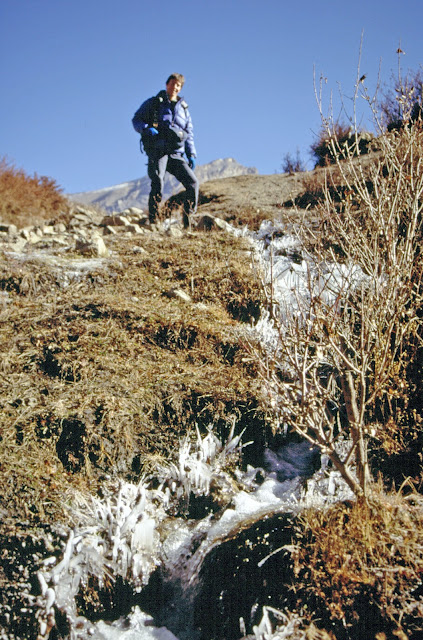 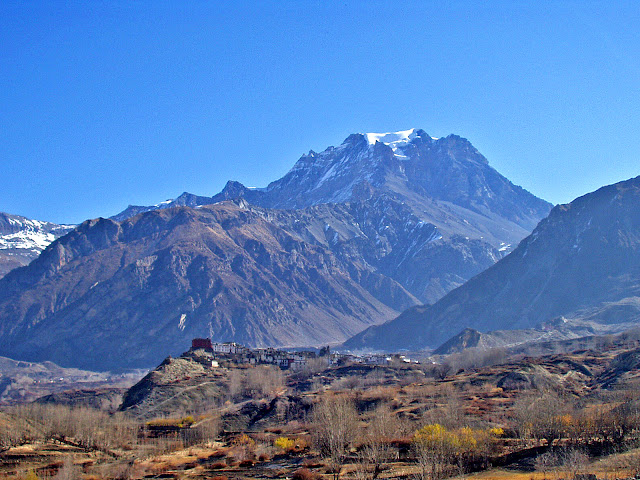 Locals sold apples, and the ubiquitous scarves. The trail was busy with trekkers going both up and down. It is possible to fly to Jomosom and walk up to Muktinath, although tough due to the altitude. Some were ascending on ponies. Further down, it was possible to see right back to the pass, which didn't really look far away! 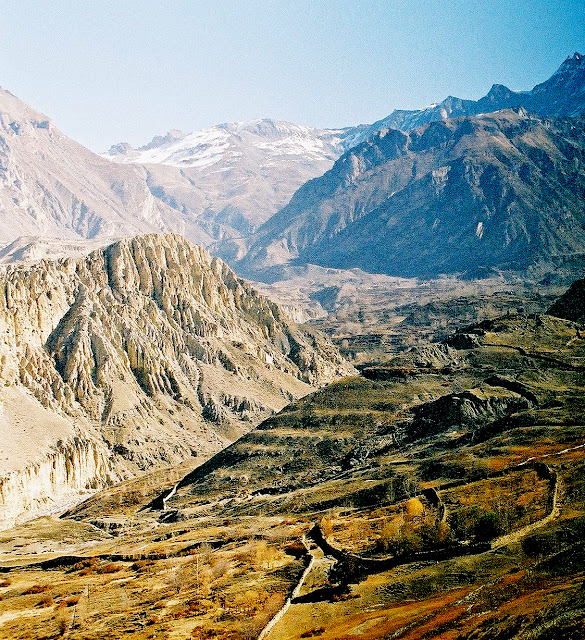 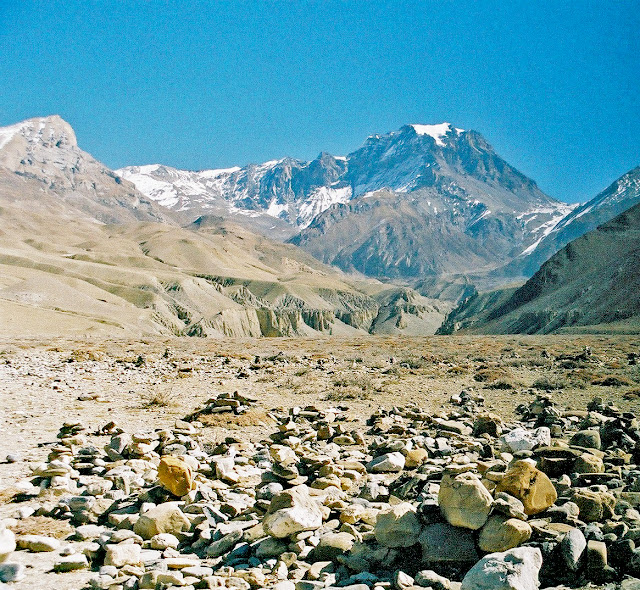 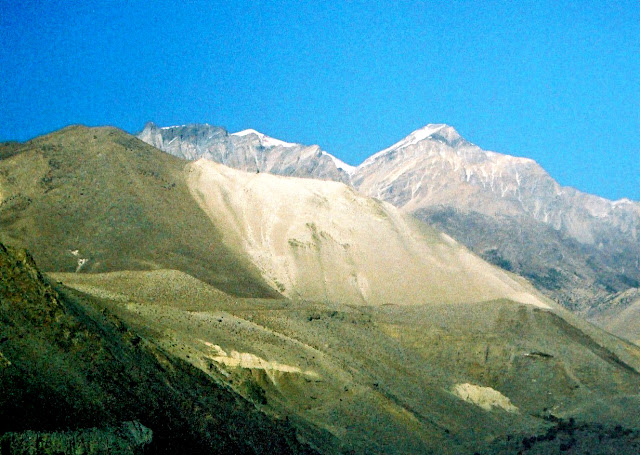 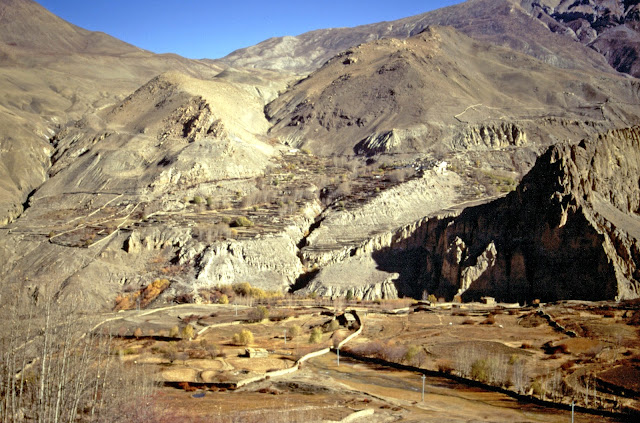 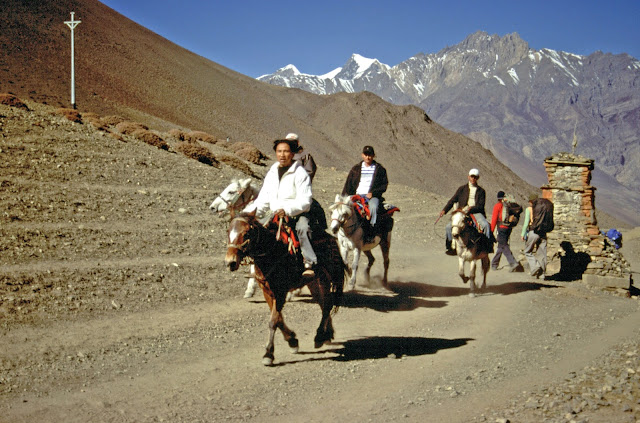 In the Kali Gandaki Valley 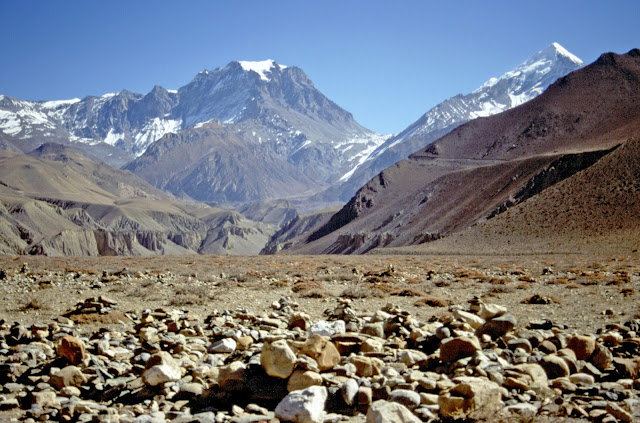 View to Thorong La, and Thorong Peak to the right

Kagbeni, our destination, came into view suddenly, at the lip of a steep descent. Autumn colours on the trees stood out, and the river in the Kali Gandaki valley could now be seen. 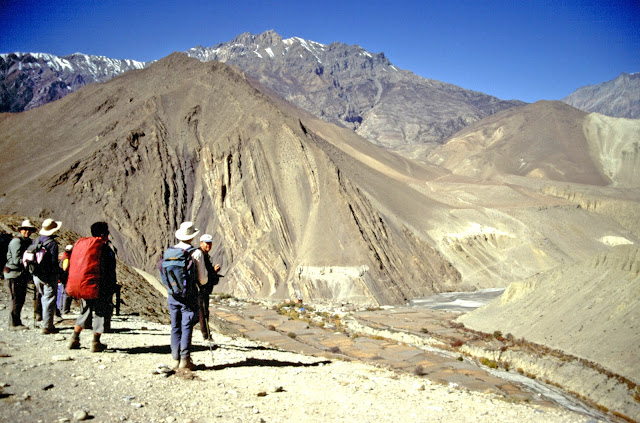 Views to the Kali Gandaki valley 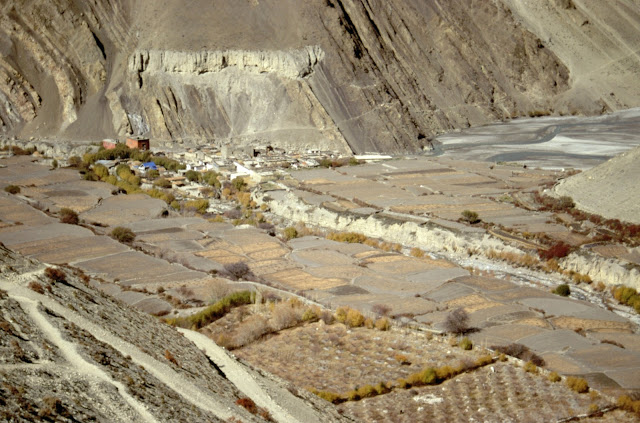 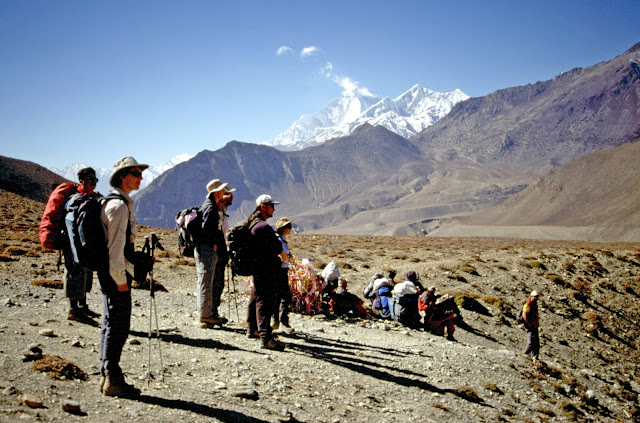 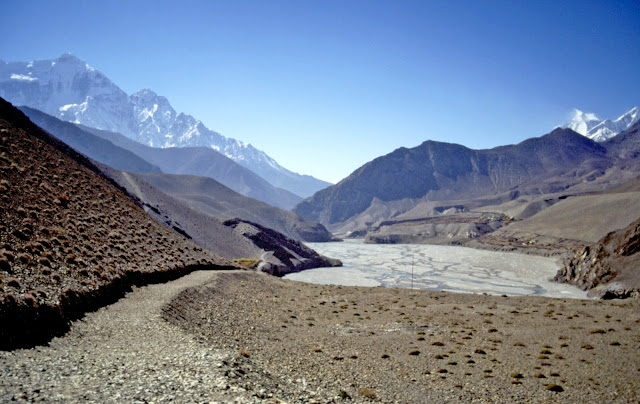 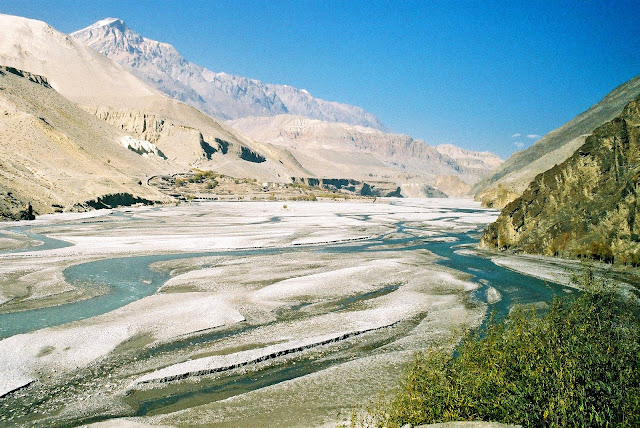 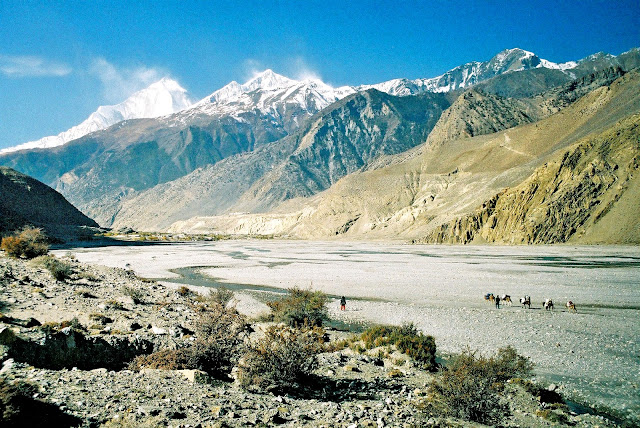 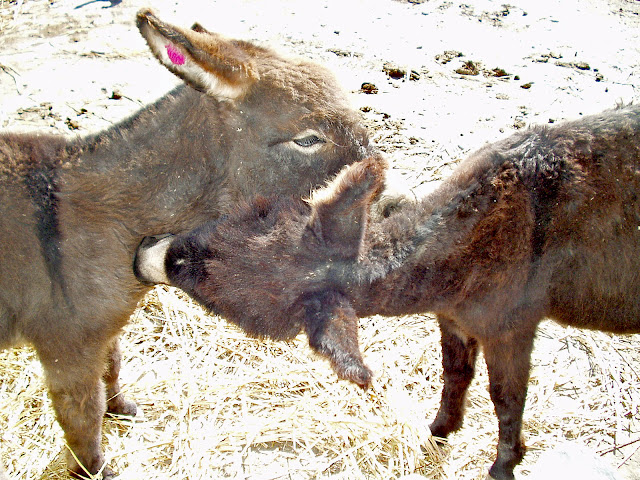 A quick descent, and Kagbeni (2804 metres) is reached. A lack of campsites means that unexpectedly we're staying in the purple painted '' tea house. We have a very clean twin room and ensuite bathroom. A private western-style toilet makes a big change to a toilet tent and seat perched over a hole! It also means we can indulge in some beer without the fear of having to get out of the tent during the night! 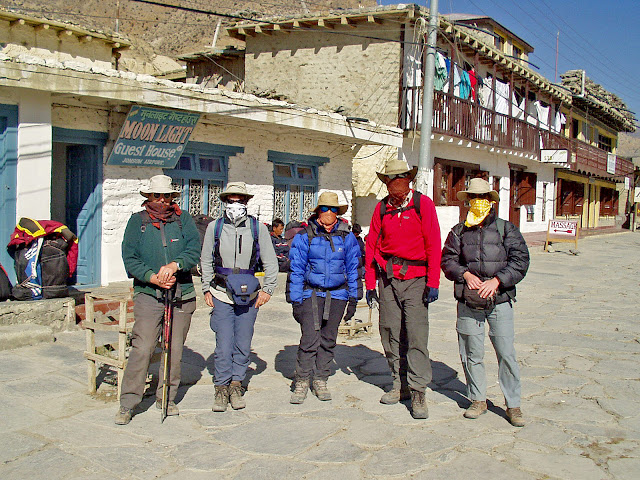 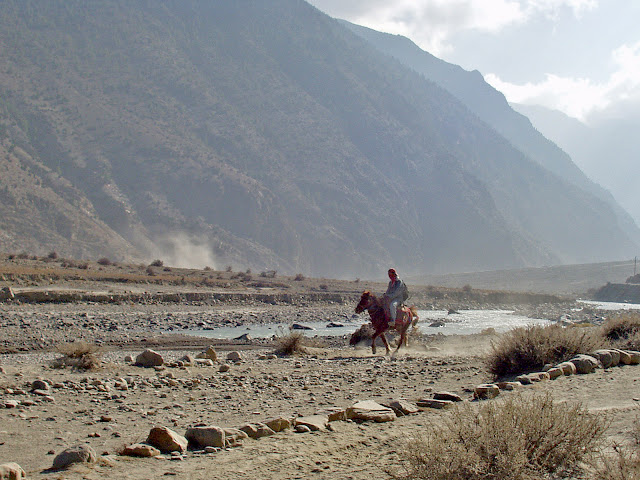 In the Kali Gandaki valley 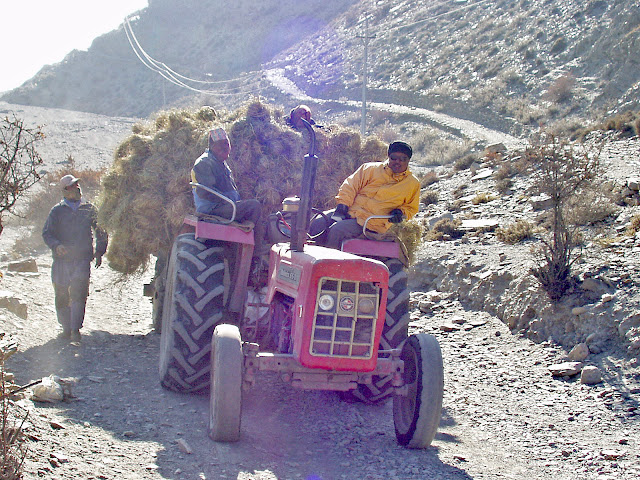 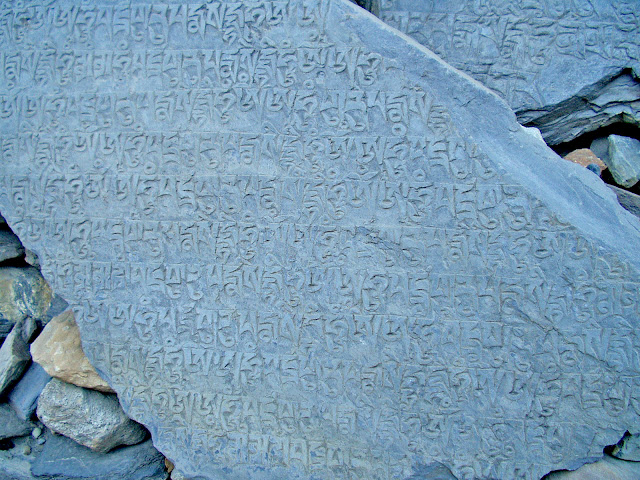 Lunch was sardine, coleslaw and sliced potatoes with cheese, and a chocolate layer pancake, after which washing water was provided. The wind was braved to go on a foray of Kagbeni - highlights were the 'Yak Donald' restaurant and 'Delimustang (cf Deli ).

A young boy grabbed our hands and turned a somersault between us - at least it wasn't the usual demand for 'school pen'. At the end of the village is a checkpost beyond which lies the restricted area of Mustang. To enter, there is a fee of $700 for 11 days and you must be in an organised group with a liaison officer. Andrew did this to attend Sanjeev's wedding in Lo Mantang in 2000. 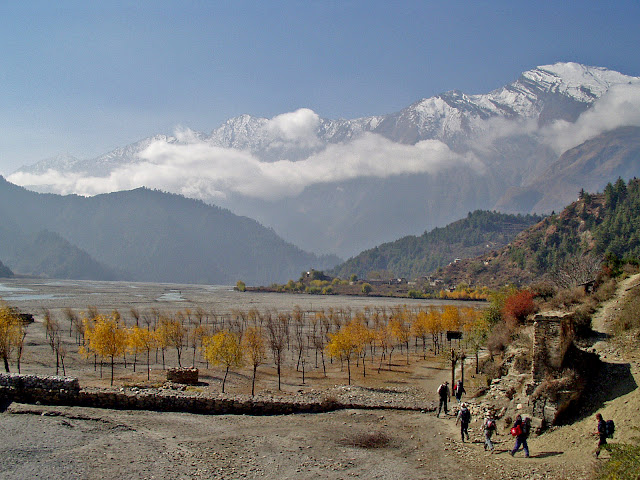 A view to Upper Mustang 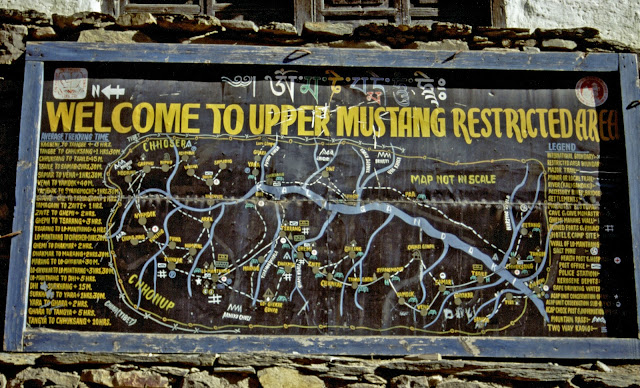 The first floor dining room benefited from sun flooding through the windows (and no wind), so was ideal for writing postcards. This was only interrupted by the Tihar or Diwali singing below, followed by a request for donations for the school. Rather like carol singing from place to place but with a group of maybe 20 or more.

Tea was served at 4 pm, then we headed to the 'Red House Restaurant' for pre dinner beers. Their top floor room was fairly warm and looked out onto the monastery roof.

Dinner, back at 'Paradise' was chicken soup, then goat meatballs, rice, mashed potato, tuna momos, and apple salad, together with Lindy's rum. A nice apple and cinnamon pie for pudding. A long game of 'Hearts' took us to a 9:30 bedtime.

Next Day
Previous Day
Index
Posted by Phreerunner at 09:03