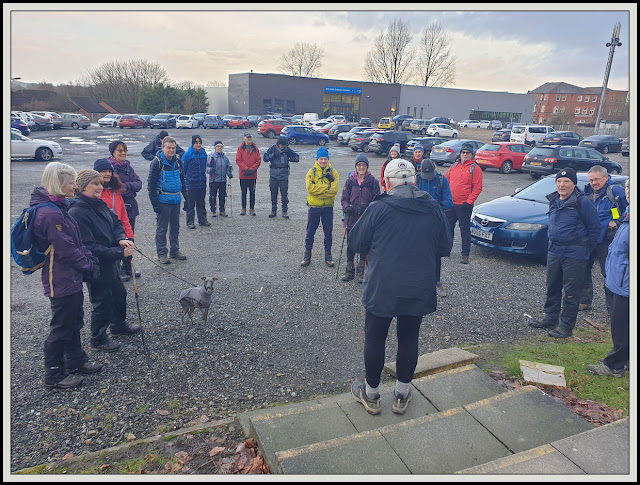 This was Norman's return to the fray after a few setbacks, and 23 people turned up for a walk in his own backyard.  Norman addressed the masses then disappeared off to a clinic, leaving June with route instructions. How the LDWA (Long Distance Walkers Association) has changed. Not long ago the 'Plodder' walkslike this one were frowned upon as not being appropriate for 'long distance walkers'. Norman was one who turned up and tried to speed up/extend the walks. Now in his mid 80's and having endured some medical conditions, I think he now realises the benefit of short walks in maintaining the friendship and camaraderie of older members of the club.

JJ and I provided the Timperley contingent on a day that was supposed to be rainy, but wasn't until we'd finished. 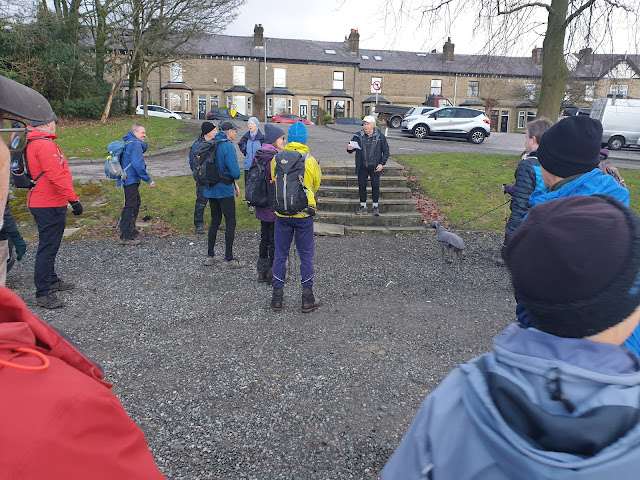 June ably led the group up past Pilkington quarry. Apparently there is a much better route, but Norman had declared it too dangerously steep! 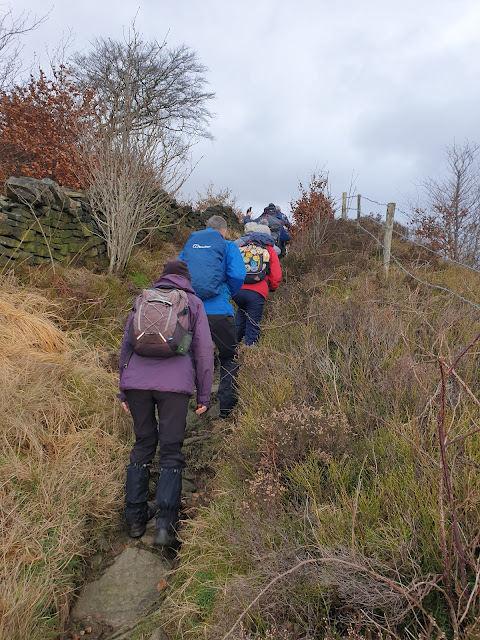 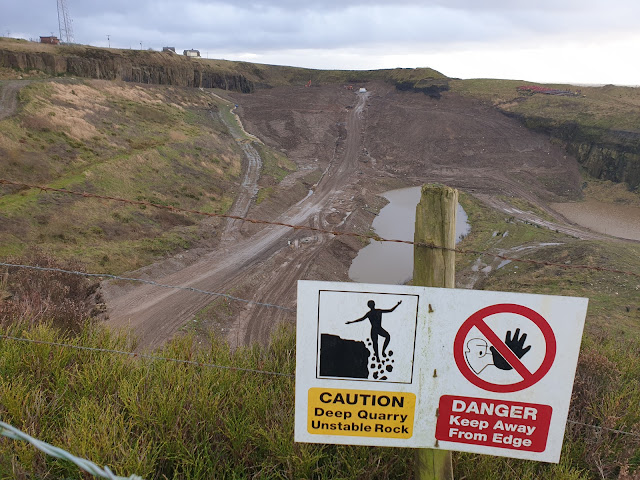 JJ and I soon became back markers. Even in their 80's some of these walkers are 'pretty damn quick'. 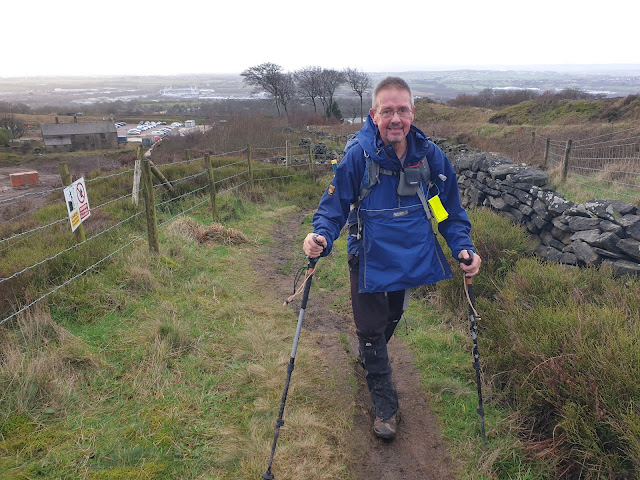 By the time we reached Holden's Plantation, Norman had reappeared, batteries suitably recharged or replaced. 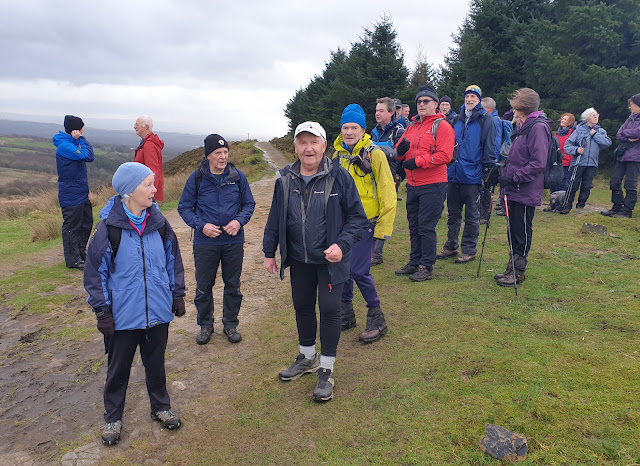 So we all strode off to Two Lads, two giant cairns near the summit of Winter Hill. 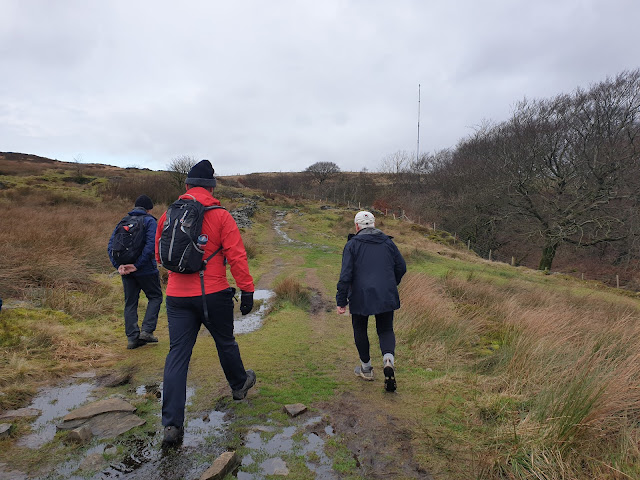 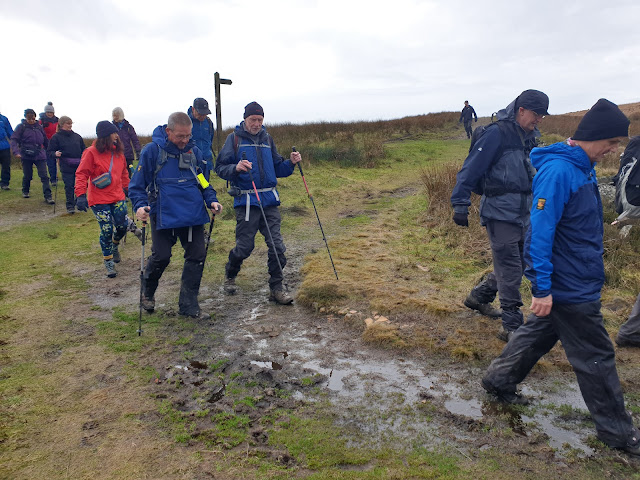 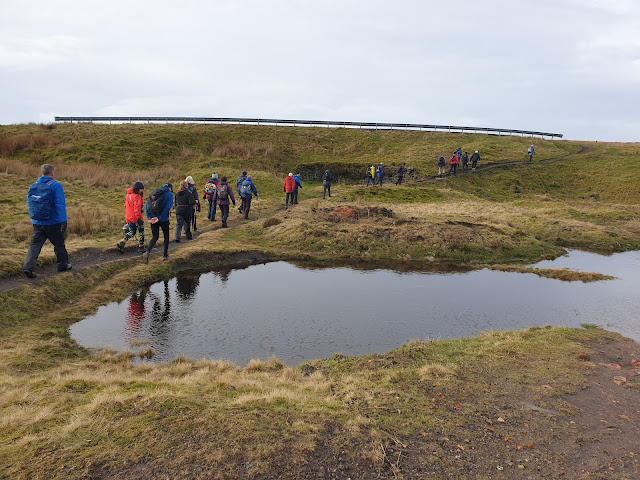 Here, at our high point by one of the cairns, 'elevenses' was declared despite 'a bit of wind'. Well, Norman is usually full of wind! Some spare cupcakes from Sue's 250th parkrun found good homes and lightened my load. 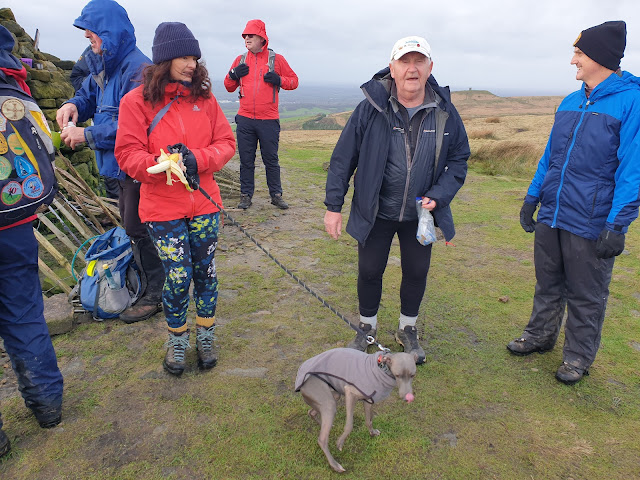 Down the hill we went. Norman likes to provide informative interludes, this time advocating psa blood tests for picking up prostate cancer. His friend had discovered he had the cancer by doing just that. 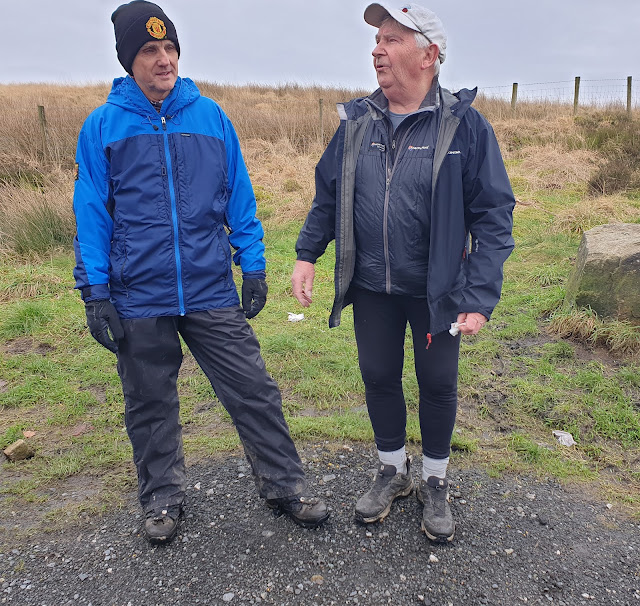 A little further on, and Norman was up again, telling us about Rockhaven Castle, a mansion built by a wealthy recluse who suffered from elephantiasis. 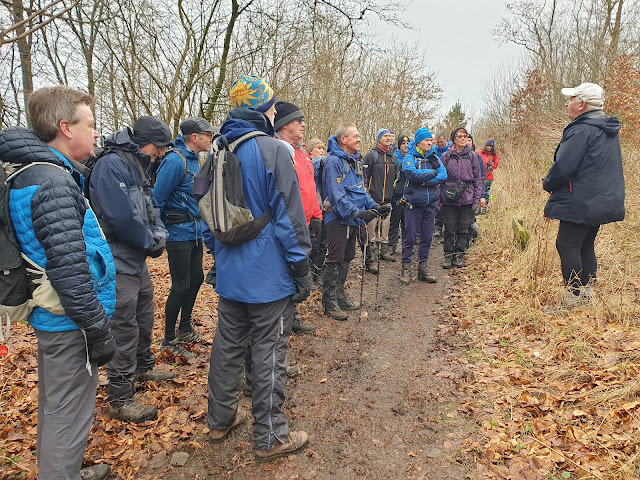 Here's what the mansion looked like. Norman thought the castle had been identified by the Germans as the marker for bombing a nearby factory. The castle was demolished, then the Germans couldn't find their 'marker', they went elsewhere to drop their bombs and the factory survived intact. That's the story, anyway. 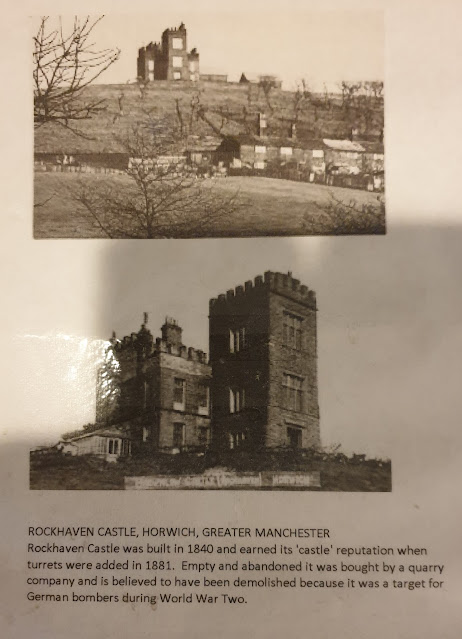 Here's the path through what was once the front garden of the castle, in Wilderswood. 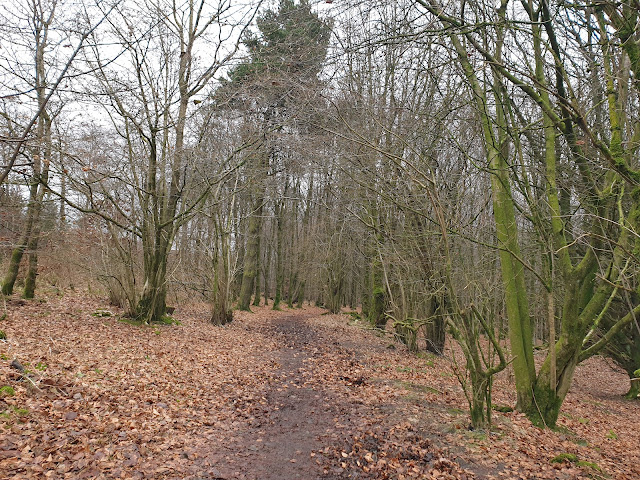 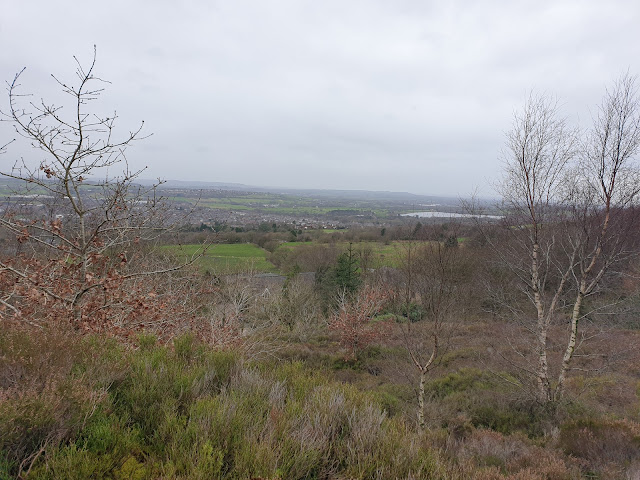 Back in Horwich, Norman on his pedestal again. This time beside a fairly new build of a small estate of houses where quarrymen's homes had previously stood. The new build had to comply with some stringent requirements to maintain original features of the old houses, such as small windows. 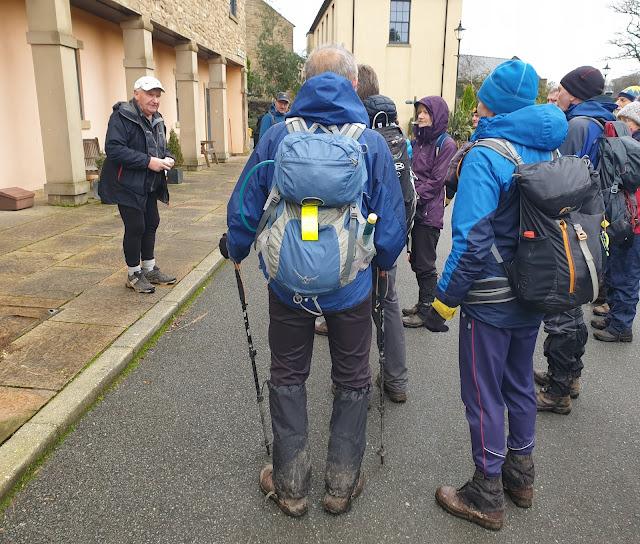 Luckily for him, the stocks were locked! 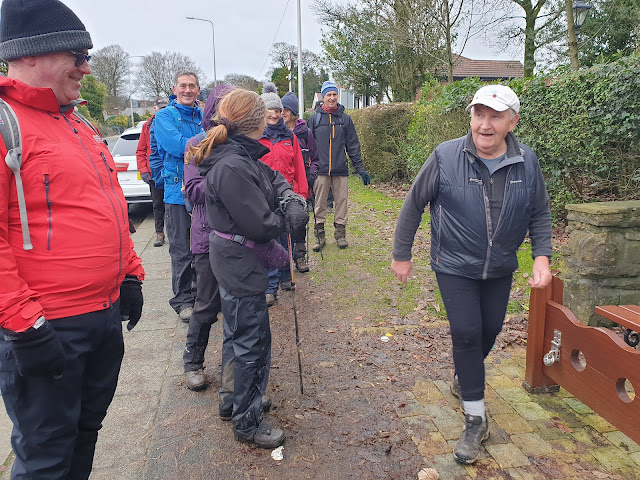 Back at the Rockhaven that is now Norman and Betty's home, there's a communal room where our entire party could enjoy tea and pasties whilst winding down from their energetic walk. Norman made another speech, his batteries were still on full power! 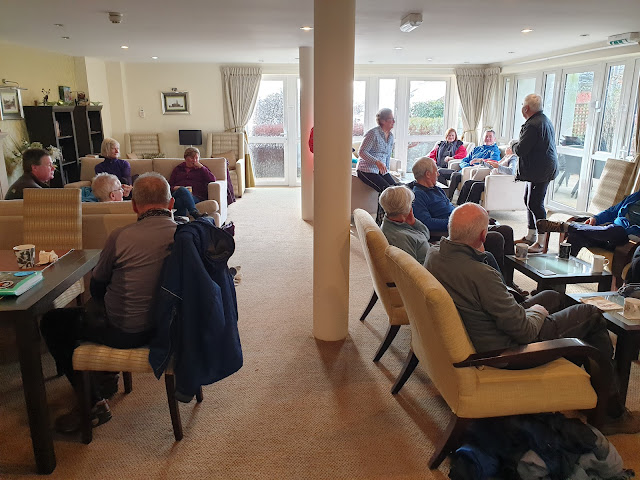 Here's our route, 11km in a well timed 3 hours. On paths with which I wasn't familiar as they were to the south east of our usual Rivington routes. 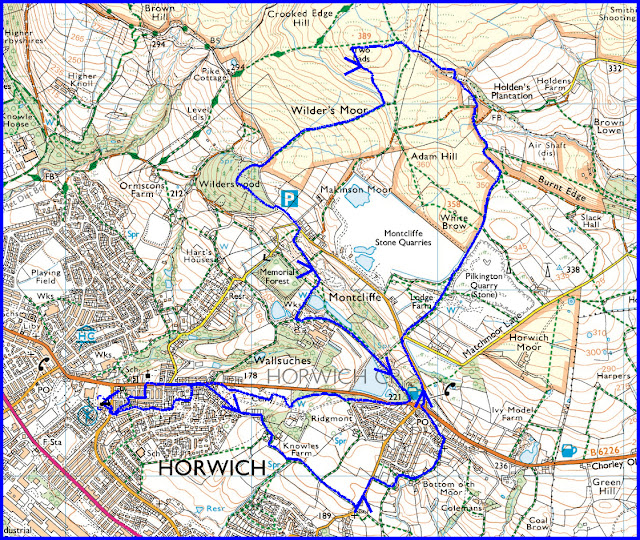 Thanks Norman, for organising an excellent outing.
Posted by Phreerunner at 16:31