Mike joined Andrew and me on a trip up The Calf back on 20th July.  His new project – climbing the Yorkshire 2000 footers – required him to climb it again.

So Mike, Bruno and I duly assembled outside the Cross Keys Temperance Inn at 9.30 am today. 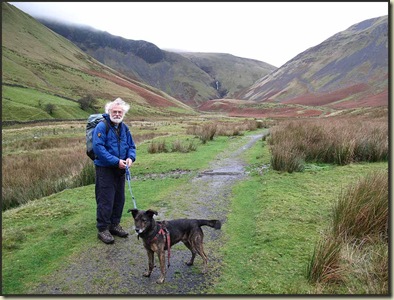 I’ve tried to over-expose these shots to give the impression of sunshine, which I am assured by Sue bathed Timperley all day. 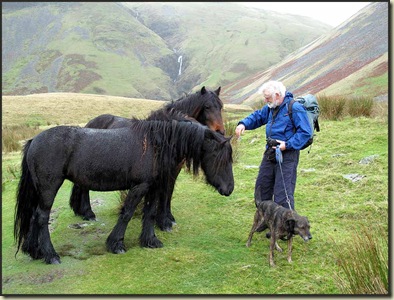 As you can see, the horses fancied Bruno, but he wasn’t sure…

Then it started to rain.  I’ve managed to digitally wipe the water from the lens, though Mike may not have been so lucky as his camera had lost the will to ‘view’ (ie its LCD monitor had died, showing a constant image of a blobby cloud).

Lots of water was cascading down the Spout.  A foursome who had set off with us, and gone ahead, were already returning to the valley. 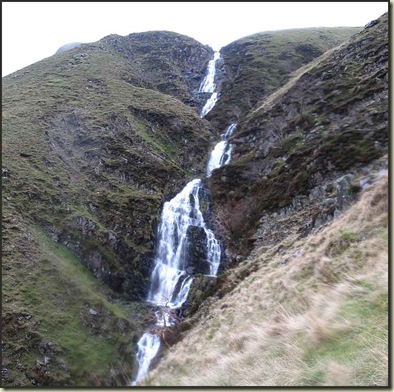 The Pie Man needed a snack.  He claimed it was a quiche, but it looked more like a pie to me.  Bruno likes pies.  He ate some. 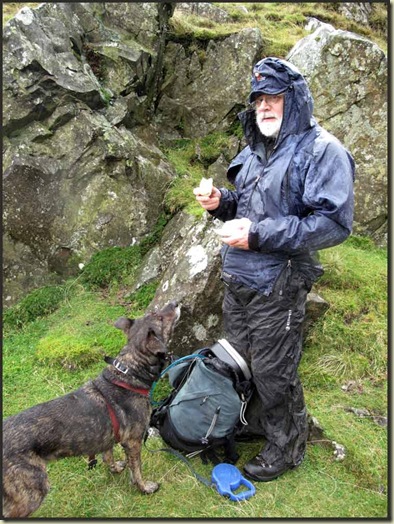 Mike lost his compass, but luckily I had one, so we managed to locate The Calf’s 676 metre summit.  This despite the distraction of Mike’s camera suffering heart failure.  After a selection of “b*****d, I thought I’d recharged them” remarks from Mike as he fiddled with a selection of batteries, the camera finally zz’d back into its own version of pathetic death throey noises. 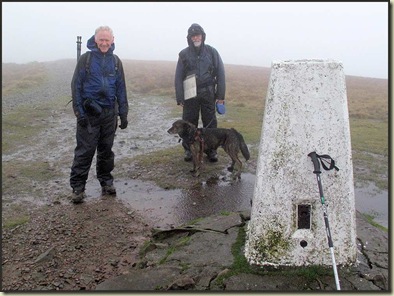 Thanks go to a conveniently encountered man with a SRC1 walking pole, for composing the above masterpiece.

Meanwhile, the rain had relented, though in the cool, breezy conditions we were happy to keep waterproofs installed for the rest of our stroll.

Bruno dried out as well, though at the far point of our walk, by Bowerdale Beck, he developed a severe limp.  “Oh s**t” said Mike, “I’m not carrying him back from here.” 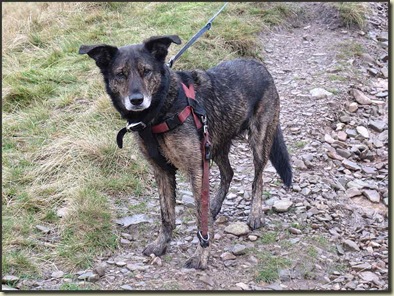 Meanwhile, Mike seemed to become aware of his impending strangulation, which turned out to be the errant compass – in its efforts to remind Mike of its existence it was slowly tightening its grip by winding its way around his throat.  It’s usually Bruno who does this – by running in circles with his lead gradually wrapping its way around the unsuspecting traveller.

Large lumps of jelly, with the consistency of wallpaper paste, lay beside the path.  Mike knows about these things – apparently its source is a mystery (the puking birds theory seems a trifle unlikely!), but it does contain organic material.  John Wyndham would have a field day… 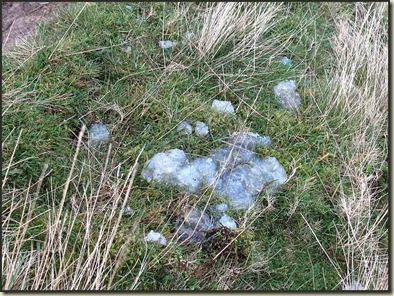 We gave the limping Bruno a five minute break.  He went to sleep.  Then we embarked on the steep ascent of Yarlside, ready to abandon the dog if he couldn’t keep up.  Luckily, he’d forgotten that he had a limp, and he proceeded to haul Mike up the hill, our second Marilyn of the day, (Mike’s an ardent ‘Bagger’). 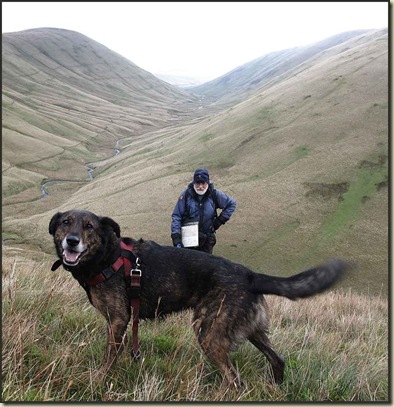 The summit of Yarlside was free of clag, but in the dull weather the views were unremarkable.  The descent was steep.  “This would be good in snow” we agreed, surveying the smooth, steep hillside.  It was wet and slippery.  We sat down and raced each other to the bottom, enjoying the bum-warming qualities of the friction of overtrousers on wet moss.

Here’s our route – if the weather had been better we’d have included Hazelgill Knott as well – 13 km, 890 metres of ascent, taking just over 5 hours. 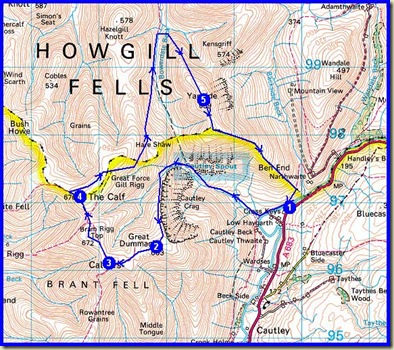 We spent a pleasant hour in Cross Keys Temperance Inn – surprisingly hospitable despite the lack of beer, with coffees, a tasty scone for me, and a glass of mysterious red liquid that seemed to bring Mike back to life.

Then we interrupted a photo shoot and went home.

The full slide show, principally for Mike’s benefit, is here.  And his report on our day out is here.

Excellent - I'd forgotten about the jelly stuff (technical term)
Sarsaparilla (Sassperella) - was the red stuff. Its very nice and good for the blood, apparently.

Can you twos please merge your bloggy things - so much reading, so little time.

Concur on that one Alan. They cunningly try to put different titles on them to make us believe they are different walks. They fouled up big time with the last one and used the same photos. I see they have adopted an element of cunning this time.

Great story Martin. I've been hearing a lot about that space jelly stuff recently...one theory was it was something to do with frogs, but I can't remember what. I prefer the alien invasion theory.

Now out of politeness I'm going to have to pop over to Mike's blog to see how Bruno's doing.

Ha Ha - if Mike and I collaborated I think the style may be a little odd; anyway - they are only short entries, even for those of you with limited attention span, and it's fun for us to have two versions. I've inserted a link to Mike's report, and notice that he has seen the light regarding a new camera.
Happy snapping, Mike.
Some readers will be pleased to hear that Mike is far too youthful to qualify for next week's LoSW trip, so you'll have to wait until 8 December for our next joint [ad]venture.
(See http://www.topwalks.com/daywalk.htm - all welcome)

A shame that I cancelled my Howgills backpack that weekend, although even the Sunday which was meant to be the best day looked a bit soggy from your photos. Nice and sunny on the Roaches though!

Just a bit of light mizzle in the Howgills, James.
And some low cloud.
Sunny in Timperley, so you undoubtedly did get the better weather.