Blog written by guest bloggers Alan (Mines a large one) Sloman and Phil (That’s not what I’ve heard) Lambert who have hacked into this blog to report THE TRUTH.

You can tell its not the usual blogger as the spalling and grammer is a bit iffy, and as for syntax, well, why not….?

Way back in those heady days just before this ultra-modern Mersey Beat nonsense came in, it was always said that you never saw Cliff Richard and Helen Shapiro together in the same room.

And so it is with Mike (The Postcard) Banfield and Martin (The Pie) Knipe. You never see them in the same room. And we’re here to investigate the reasons.

And, what a giveaway – they blog at the same time and about the same walks with the same pictures. The only difference is, of course, that the actual words are sometimes completely different.

If you don’t believe us, check out the other blog here.

We have suspected for some time that these blog posts actually do relate to REAL walks. It’s a very clever double-bluff. There were dark rumours of a secret tryst, involving dirty boots and damp trouser legs and a WALK, beginning at the quiet Yorkshire village of Embsay in Craven, once said to be the centre of a legal rambling ring, but never convincingly proved as a fact.

But this time, we had them Banged to Rights. We sent out Grousey, a radio-controlled clockwork chicken, cunningly disguised as a Red Grouse (that’s a wild bird, not a grumpy socialist) to monitor their every move….

And this is what we saw.

First of all, we have to report, dear readers, that there is NO DOG. Bruno is a figleaf of the imagination. He doesn’t exist. We suspect photoshop, to be honest. Why they should go to this length as to invent a fictitious pet is beyond us. Maybe they just wanted to appear normal or something.


Their was a meeting quite near the once-renowned country inn – The Elm Tree, in Embsay village centre – now cunningly disguised as a coffee shop – but without any coffee…. 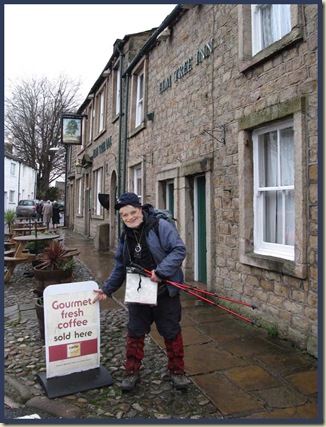 (You can see just how clever these two are, now, can’t you?)

Under cover of a women’s institute yoga, life drawing and belly dancing seminar, our two suspects sloped discretely off up a quiet lane and disappeared briefly into dense hillfog about 800 feet up the slopes of Crookrise Crag. 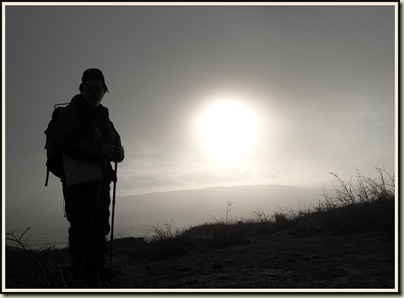 Our roving correspondent kept track of them in the improving conditions. 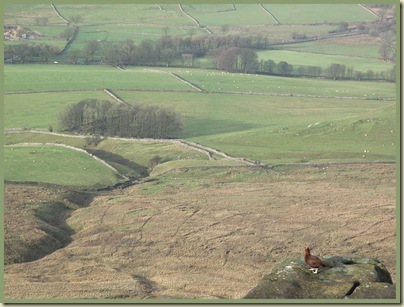 Later.they were seen laughing and joking and drinking “something” out of flasks by the trig point on the top. 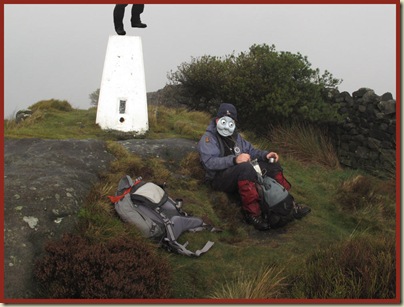 The mist slowly cleared to reveal that both were wearing gaiters of the type commonly sported by the mountaineering classes. Already they had expounded more calories than the average Outdoor Blogger  in a week of keyboarding. But let us continue. We must warn you that there are parts of the story coming up which decent home-loving OBs will find quite distasteful. You may wish to alter the contrast on your screens.

They was tracked in their halting progress over deep heather and across a small stream at the head of a waterfall. 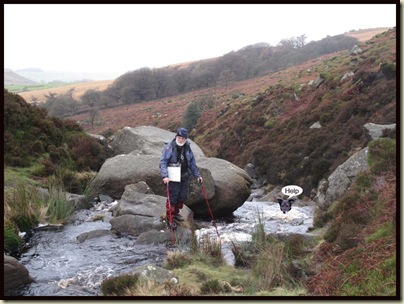 One of them was heard to say “Fatdog – that’s a real dog y’know” and they both laughed. Here, they managed to avoid our monitor for a while, but we picked them up again disporting themselves by a large stone Cross teetering on the edge of a beetling crag or cliff. They actually seemed to be enjoying themselves. Outrageous. 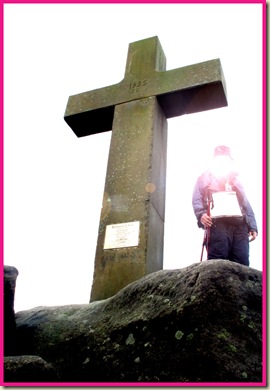 And then, a bit later, they were spotted enjoying luncheon beside an obelisk or stone pepperpot, having scared off a couple of innocent day walkers, one of who was heard to say “Quick, put your clothes on, Brenda, there’s somebody coming.” 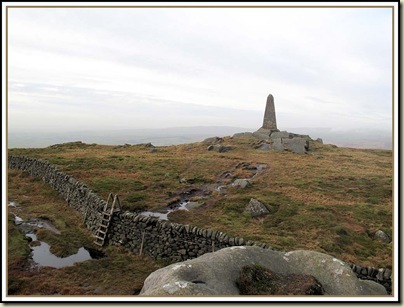 At this point, we, whilst skillfully monitoring their progress, 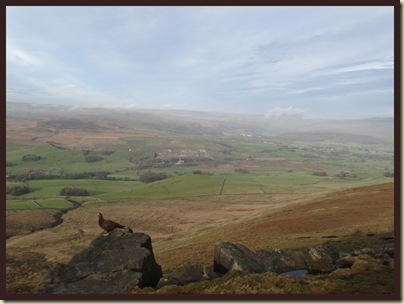 were beginning to wonder just exactly what it was that these two get out of this outdoor malarkey, for, given that any sensible OB would of taken the opportunity at this point to descend to the pub at Cracoe, get absolutely blotto on strong spirits and then get a taxi back to Embsay, these two, unbelievably, continued, bashing their way through deep bog and heather to visit yet another trig point. 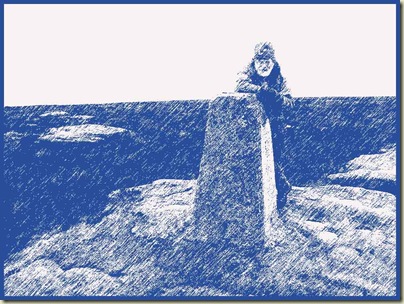 And, did they then, at this point head for home? Not on your outdoor blogging nelly, they didn’t – they went North to some squalid huts, 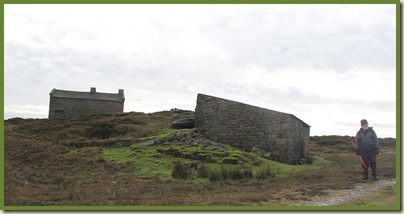 one of which they entered, obviously casing the joint for a possible overnight bivi (I told you this would get unpleasant, didn’t I?) and only then – only then did they find a track which led them back towards Embsay. 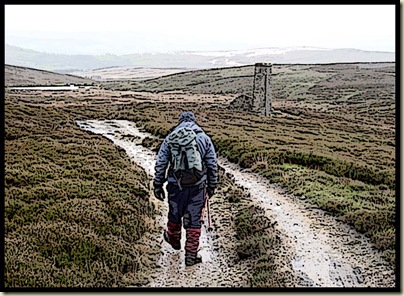 Behind them, the rejected bothy stood stark on the horizon in the late sun. 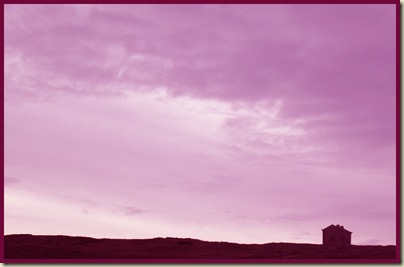 And, the final proof, that these two really are involved in Outdoor Activities (we know..it sticks in the craw….) they didn’t descend directly back to Embsay as they could of done.  No – they used the last vestiges of daylight to visit Embsay Crag, where they brazenly took photographs and were heard laughing and joking, and waving to dog walkers and sailors below. 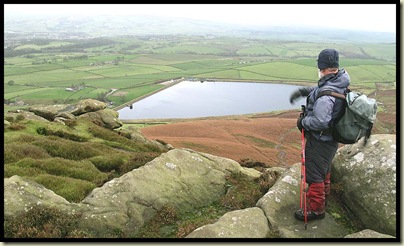 We ask you – is this the kind of behaviour we expect from Outdoor Bloggers. We mean, they’re supposed to be blogging, not traipsing about in the countryside.

We save the most damning piece of evidence till the last. They obviously did not have a stove. There was very little evidence of gear testing going on, in fact all of their stuff looked old and used. Martin Knipe looked specially old and used, in fact.

We expect you’ve had to sit down and let the shrapnel of that final devastating bombshell finish rattling around your sensibilities.

They must be Brought to Book (the capitals are important here). This is just blatant.

Comments, please…..we can’t be putting up with this.

Please send your objections and a cheque or postal order for £5 to Alan Lambert, League Against Cruel Rambles, Postcard Pie Cottage, The Flat Mile, Fenland, UK.

Finally, our SPOT activated Grousey reported the following co-ordinates for this most unusual and unexpected OB activity. 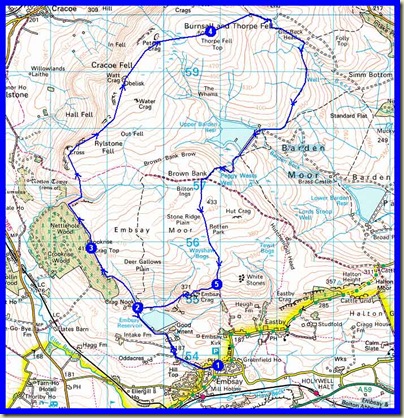 Hmmph
What sort of people are they that hack into your Postcard when you are fast asleep, and not even in the Great Outdoors? They couldn't possibly be Frustrated OBers, could they? - Frustrated OBers would Never do that sort of thing? Surely Not!
Signed:
Indignant
Timperley

wow most entertaining blog post on here ever lol

Hmmph
"most entertaining blog post on here ever"
...and I didn't even write it....

Wait a minute... I've been here before have I? Or not? Obviously it's the answer for those old, decrepit OB types (sorry ;) ). Syndicate out the blog content so you can just get on with your snooze in the afternoon.

"Scratchcard from Timperly" would like to announce that its shares have been suspended on the Blog Exchange pending An Enquiry - and the capitals are important here.

Lord Elpus will be chairing the enquiury as he likes a good chair - none of this walking nonsense, if it can possibly be avoided.

Normal Service will be resumed as soon as possible.
These Infiltrators must be 'Brought to Book'.
Lord Elpus indeed!

Next time, we'll have all the same comments too.....

So, this is what Lord E has been up to - Hacking! I really didn't think he was bright enough. I thought he was just doing something harmless, like logging on to Bolton Babes or Glossop Glamour or whatever.

He has been taken in hand. The only hacking he'll be doing for the rest of the day is to the hedge in the lower field.

Is that the equivalent of 'dunces corner'?
The really clever bit was the clockwork chicken. I think he may have been practising on Diana. I know of only one other person capable of such an invention, but he would need an inordinate amount of sherry to do it.
Will you be taking the Good Lord in hand tomorrow?

I love the pictures of the dancing legs on the trig point, and the poor wee drowning dog LOLOL!!!

Pwhaarg!
Sorry - not sure how else to spell the sound of mince pie crumbs being spat and snorted over a monitor.
Can we expect more cutting edge investigative journalism from the same source?