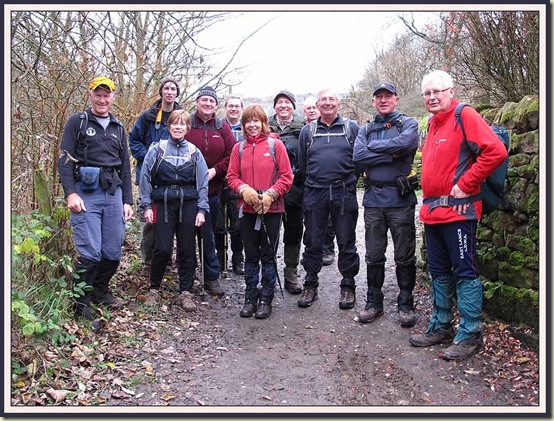 We started on the Lancashire Trail in October 2011, and most of the Plodders had finished it by May of this year.  I’d missed both the recce and the actual walk, so Reg kindly arranged another outing on the same route.  Eleven people turned up.  Most had been on the earlier walks.  There is an attraction hereabouts that is much stronger than the Lancashire mud we encountered today – the fish and chip shop at Kelbrook!  Sadly I had to leave before that delight, so yet another walk in this vicinity will have to be arranged…

After setting off from Barley at around 11.15am, I soon realised that Reg had omitted to take the traditional group photo, so I deputised for him – see above: Martin, Paul, Ann, Neil, Bernard, Nancy, Allan, Jim, Phil, Alan and Reg.

There appeared to be a fungal epidemic as well as a mud fest as we wandered through the leaf litter that concealed a deep gooey brown substance.

Whilst it was a good, sociable walk in fine if cloudy weather, there did seem to be quite a bit of this goo.  Mud and trail shoes (the chosen footwear of many LDWA members) don’t go together too well, so whilst my footwear allowed me to stroll dry-shod along the muddy tracks, others diced with barbed wire fences in a futile effort to keep the mud below ankle height.

A herd of water buffalo looked on in amazement.

Luckily, Don was not with us (still recovering from his broken ankle - ‘hello Don, hope it’s getting better’) so nobody fell in! 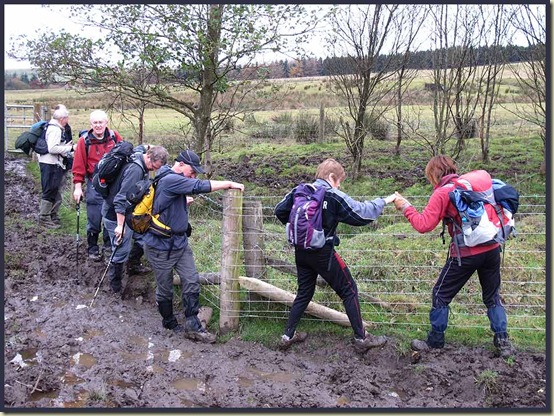 “That’s a 'Poor Quality Tractor'” announced our resident Tractor Expert, as we passed the remains of a piece of machinery called David Brown.  “But that’s a 'Class Act'” he asserted as we encountered a dilapidated three wheeler called Fordson Major, a little further down the hill.  He even offered a plausible explanation for the missing wheel!

The route, shown below, took us through pleasant woods then through fields near gently trickling streams, in a north eastern direction to Admergill.

Then we slithered up a hill to a rather exposed row of rocks that provided an excellent spot for lunch, if rather cool.  One major shortcoming was the proximity of the Moorcock Inn, a few metres along the A682 but inaccessible from our nearby path.

The lunch spot afforded a distant view of Stansfield Tower (aka Blacko Tower) which the original route of the Lancashire Trail visited.  We had walked in view of this landmark all morning.  The tower overlooks the village of Blacko.  It was built around 1890 by a local grocer, Jonathan Stansfield. 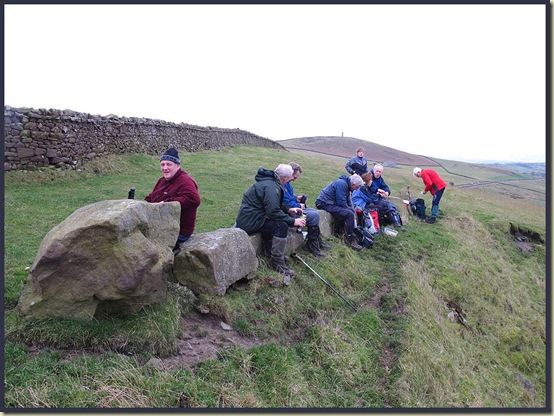 A little further along our route, two gents  were evidently enjoying the view from the garden of Peel House Farm - 3 beds, 8 acres, on sale for £495,000 - so these chaps may soon disappear. 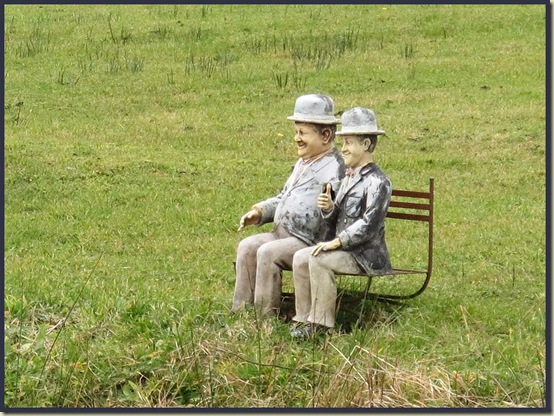 It was a pleasant stroll over White Moor, where we encountered a couple who enquired as to our destination but looked completely baffled when we said ‘Thornton’!  Perhaps they had never been to Yorkshire…

The Leeds and Liverpool Canal was crossed at Barnoldswick, after which we found even more mud, but a considerate farmer had spread a bale of hay over the offending area.  Well done that man!

Alpaca looked on curiously as we rose on a good path to the final 187 metre hillock of the day, before wandering down to Thornton Hall Farm Country Park.  Little Ann’s eyes lit up as we approached – she would surely gain access to the swings on a child’s ticket … – but sadly the park was closed.

That left us with little option but to run a border patrol of attentive donkeys to conclude the walk just inside Yorkshire, at the Church of St Mary the Virgin. 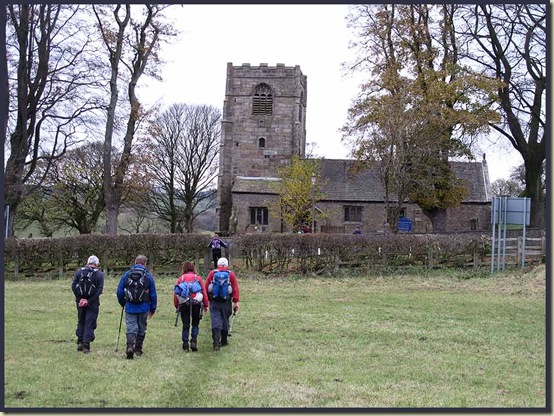 There was probably a Saxon church here, but the first recorded resident priest was William de Byrley in 1280; the building, therefore, dates back at least to the reign of Henry III, but most probably a good deal further. It was rebuilt some 200 years later during the reign of Henry VI, and was modernised and extended on numerous occasions, up to 1998 when two extra bells were installed. 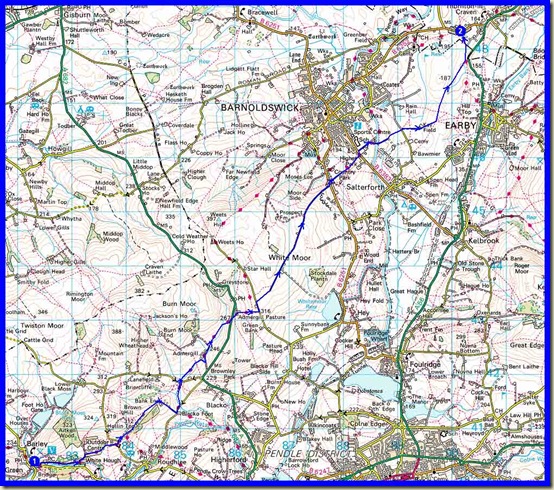 Alan R, in his excellent ‘Blog on the Landscape’, reported in more detail on this walk here, some time ago. His report seems to have stirred a debate about the merits of the trail straying into Yorkshire, and the rearrangement of the ‘Roses’ boundaries.  Not being from either county, this correspondent can only cast an amused smile over that debate.

Reg’s more accurate report on the walk is on this page.

Grand muddy post Martin. But at least you live on the red side of the boundary.
I need to learn more about fungi, there was a lot of it about wasn't there. All interesting and maybe edible.

Just noticed that your Up's tally is 300M whereas my Satmap screenshot shows we did 412M. Any ideas why we have such a discrepancy?

Fungi - my carefully engineered close-ups didn't come out, but curiously we gathered some Waxcaps over the border in the Yorkshire Dales yesterday. They were delicious sliced and fried with garlic, on a bed of lettuce.

On the satmap you can alter the way that Altitude is recorded either by OS map figures or by Satellite. I understand that the OS map way is more accurate. On our next walk we should check out what the difference is if we both record using the 2 methods.
But when you consider that the hills were minor we really shouldn't be that far out. It's a bit of a worry.