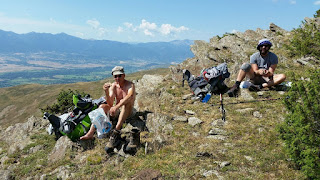 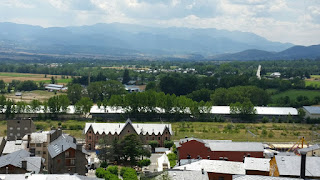 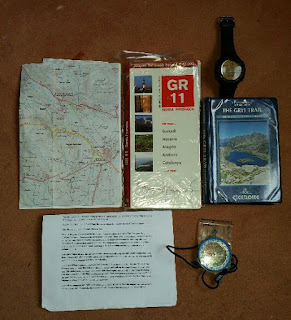 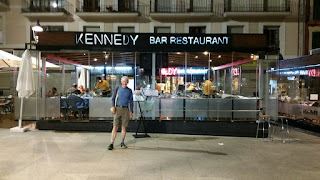 Another night of good sleep with a messy awakening saw me in the shower at 7 am. Shame they don't turn the heating on until 8 am.

I joined the others as they polished off a lavish breakfast at the refuge. I still didn't feel like eating.

Thankfully today's short walk was mainly downhill, but in progressively increasing heat, so nevertheless quite hard work on a stomach that's been empty for two days.

It started windless and hot. There were mosquitoes so we only paused briefly to check the notoriously confusing waymarks. We managed fine. We are experts.

André was savouring every moment as this was his last day of walking before he goes to explore Toulouse for a few days then returns to Geneva to help out his 95 year old mother. He will be back at a cooler time of year to complete GR11.

The hazy views aren't really suited to snapshots, hence few images today. But the views across the plateau to our next target were excellent, and further to the south the wall of mountains looked like one side of the Ordesa Canyon (how long ago does that feel?).

We seemed to bypass a restaurant in Guils de Cerdánya, which was a shame - a cold drink would have been good. Some signposting from above, rather than below, would have helped. Both that village and Saneja a bit further on were deserted. Apparently they comprise second homes for people from Barcelona, who just use them at weekends and in August. They make English and Welsh villages that comprise mainly holiday homes seem positively vibrant.

On entering Puigcerdà we headed, as recommended by Humphrey, to the Tèrminus Hotel. The three Dutch, somewhere behind us, were booked in there. But it's fiesta time, with a fun fare outside. Noisy, and we know the Spanish enjoy their late nights. My nose started to bleed at the very thought of it! (First of the trip - inevitable.)

So after much debate we went up a lift to the upper town and booked into a 'Pension' - Hotel Maria Victoria. €30 each for B&B is rather a lot for our very basic room for three. I really need a rest day, but can I cope with this place for two nights?

As mentioned in a comment, André seems actually quite pleased that he has finally arrived at the sort of hotel for which he holds Spain in such esteem - a very basic room with no loo roll, soap or hot water. And when he and Tobi went out and tried to return to the room they weren't recognised without their rucksacks and nearly failed to get in! The lady boss has been hugely apologetic ever since.

Today's pictures:
A break on the descent
View from Puigcerdà
Navigation equipment
One for our guru, Humphrey, who we thank for his recommendations, in one of which I enjoyed my first proper meal since Encamp

Hope you are feeling better soon Martin, feeling so poorly and weak in all that heat must be miserable. At least your feet are better, or maybe you are just distracted?

I'm not sure if you have any medication but I have found Imodium works well for the screamers, and Senokot for the opposite - they are always in my rucksack. I don't envy you - I had a similar occurrence on my GR10 but it didn't last as long. I reckon it was caused by drinking from a spring.

Not on this post, but on most others your comprehensive recognition of wild flowers is impressive. How did you acquire that knowledge?

Just distracted Louise, but a day off will hopefully sort out the remaining sore toes. The problem with pressure sores seems to be that cuts open up and take a little while for all the skin to harden.

I've been through a whole packet of Imodium Conrad. Ciprofloxacin would have been useful had I had any. Luckily the diarrhoea has finally passed, so to speak, and a day off in Puigcerdà should refresh me for the rest of the trip.

My flower knowledge is limited, but I do normally carry a hefty guide to Alpine flowers. For this trip I just have Gillian Price's mini Cicerone guide, so I've struggled a bit as it's not so comprehensive. The flowers are starting to fade a bit now.

Well, you folks were in luck! You hit the last day of Puigcerda's Rose Festival - they're held all over the region at this time of year, and map to our Harvest Festivals. Keen readers can Click here to take a look at this year's programme

I guess you'll be in Nuria by Thursday, and after the ridge there's a big change in the landscape - you're out of the mountains . . . So glad you're feeling better.

Feeling much better Humphrey, thanks. And dry - it started raining at 3.30....

Our grandson didn't wake me until 5.56 this morning! Then we spent almost all morning at the 'racetrack', with alternating stockcar and banger races. We even had a podium for the winners - always the same ones! Tatton flower show will seem rather sedate tomorrow!

Haha - sounds like you are working hard this week!
Have a good time at Tatton.