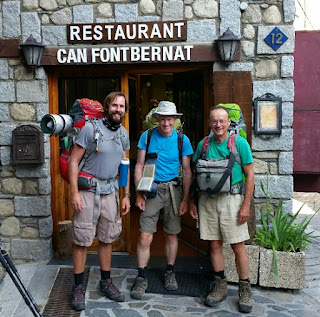 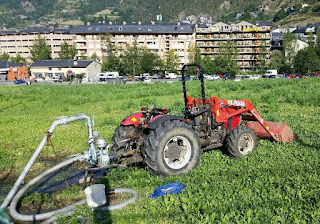 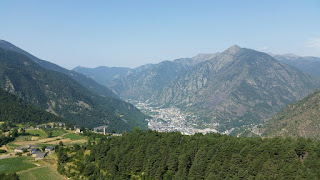 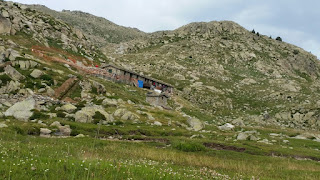 Weather: hot and sunny, clouding over later, as it did yesterday.

Montse gave us toast and jam and lots of coffee, then we settled up and were waved off.

The morning was spent mainly on more of the same - pleasant forest paths.

The good news: my sore feet were almost back to normal today.

The bad news: I had diarrhoea all night and stomach cramps and more diarrhoea on the hot 1400 metre ascent.

The good news: I'm now walking with Tobi and André who have been most welcoming. It's a great shame I held them up so much today, but they are great companions and very understanding. Tobi met André soon after saying goodbye to me in Sallent, so they have been walking together, albeit at their own individual paces, for most of the time since then (two to three weeks).

[After writing that I flaked out for twelve hours.]

I really can't remember the last time I felt as wiped out.

The afternoon saw us slowly (very slowly in my case, not helped by me stopping and leaving things behind and having to go back for them) move from woodland to alpine zones, with whistling marmots etc. There is still a scattering of pine trees though.

Leopardsbane and columbines put in a strong appearance.

Unusually, there were lots of people around, including a club with their backpacking dogs. They are very friendly and jolly - both the people and the dogs - and even André might be overcoming his dislike of some dogs.

The Refugio, when I finally reached it, is one of Andorra's well maintained unmanned refuges, known to people in the UK as a bothy. Tobi and André had saved me a space, but with a large group of scouts due to stay there I enjoyed a cup of tea then took myself off to camp on a lovely flat pitch nearby.

Then I flaked out, waking only to close the tent when a brief storm passed over.

Today's pictures:
Setting off from Can Fontbernat
One for Alan R
Andorra La Viella in all its glory
The view to the bothy fom my tent just before I flaked out.

I'm sure you'll feel better soon Martin. I hope so anyway. Not that many pages left to turn in my guidebook...

Perhaps a day off is called for? Your plan has one scheduled for Planoles, where Hotel Can Gasparo is rated 8.7 on Booking.com and Fonda Ca Daldo guest house achieves 9.0! Am I enticing you...?

As one of our fellow walkers used to say: 'must've been a dirty glass...' Hope you're feeling better - a day off sounds like a good plan!

In this case, a Very Dirty Glass!
It's a shame. Having caught up with Tobi and André I immediately became a liability.
Thanks for your sympathy everyone - I'll try to make it make me feel better.

Blimey. That's not good.
:-(
I came home from the TGO Challenge this year having picked up Giardiasis. (God knows where from!) I'm still recovering from it - absolutely ghastly. Totally debilitating. One mega dose of Tenidazol didn't shift it and I am now waiting on test results for the next course of treatment.

Thanks Alan, I sympathise. Luckily I'm back to normal after 4 days, so it wasn't anything long term, but I have had that and it's not nice. By all means consult the Dishy Pharmacist if you think that might help.