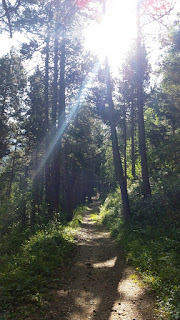 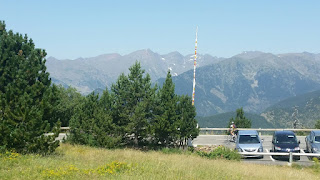 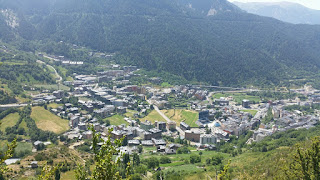 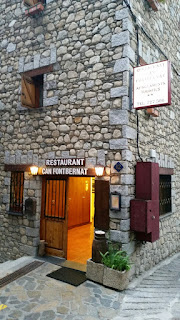 A morning spent mainly on more of the same - pleasant forest paths.

The Brick felt much less like a brick this morning. There wasn't much food in it. But I feel weary. And that's after the shortest day since my day off in Benasque. My feet are recovering though.

Setting off after a leisurely breakfast at around 9.30, the sky was as blue as ever, though after last night's rain it seemed a little cooler. The forest path was lined with the usual wide array of wild flowers, with the orchids looking rather tired, but the bright flowers of dark red heleborine were looking cheerily chirpy.

Two mountain bikers whizzed down the hill as I ascended a path that was ideal for that particular sport (in a downhill direction only).

The 1983 metre Coll d'Ordino is at the top of a road pass. It has views towards an assortment of Andorran peaks, their high snow patches glinting in the hazy sun. Cyclists and walkers were enjoying being there.

A signpost indicated the way to Encamp. Two paths led in that direction. I chose the more heavily used path and followed some 'CI' signs. After twenty minutes it occurred to me that I was on a contouring path (Circular Itinerary?). Returning to the col, and the other path, a GR11 marker soon appeared and I made my way down to the rather large town of Encamp, wandered around it for a while, and eventually found Tobi and André at a pre-arranged rendezvous. Sorry I was a bit late chaps, and thanks for the beer.

Tobi is German German and André is French Swiss. Their common language is English. That's not inconvenient from my point of view. They had kindly rented an apartment for three at Can Fontbernat in a part of town that even Humphrey couldn't complain too strongly about.

After a restful afternoon for us all, beer o'clock has arrived and as a little 'extra' André has just been served tripe - proudly produced by the owner, who points to sheep on the hillside whose children's stomachs are now being eaten!

The owner and his wife then proceeded to showcase their culinary skills. We chose only two of the five starters on offer, so they brought us tasters to show us what we'd missed!

A lovely evening, spent with two like minded 'men of the mountains' and our most genial Andorran hosts.

Today's pictures:
A typical path from today
View back to our route into Andorra from Coll d'Ordino
Encamp
Can Fontbernat

Since the phone signal doesn't seem to support data any more, it may be two to three days before the next episode, when wifi is next available.

You're keeping me entertained at breakfast. Albeit a good photo, I had a go at enhancing the one of the forest with Photoshop, but the exposure on the sun is beyond reduction. On enlargement there appears to be a sheep-like animal at right angles to the path about two thirds down, but because of the pixel reduction I can't say more than that.

Hi Martin. We are following your progresses and adventures through the spanish and andorran Pyrenees. Initially, we had planned to join you somewhere around the Monte Perdido, but it could not be possible. This summer will be for us a working summer ; it's a pity but the french loys don't yet allowed us to take 8 weeks of vacation every 2 years... :) ! Nevertheless, we are glad to see that you are doing good progresses under the hard sun. The wild wild country (without wifi) where you are now close to enter in, called Cerdanya in Catalan, is the land of my granmother. We hope that during your trip, you could study the maps and that you have found a 4th path to cross the Pyrenees after HRP, GR10 and now 11, because we still would like to do a part of trip with you in these mountains. Perhaps you are inventing a kind of TGO challenge for the Pyrenees where each year, you cross the chain by a new path... Have some good days. Pierre and Yolaine

Andorra isn't in the EU - even tho' it uses the euro and has a trade agreement. So isn't covered by your carrier's Europe-wide data plan. All will be well once you return to Spain! The monopoly Andorran phone company makes 80% of its revenue from roaming charges - ie foreigners. The Andorrans are very good at this kind of thing - they have been at it for centuries . . .

Good news that you have found some company, and enjoyed some shorter days. I've had a lovely day with your mother, who treated me to lunch and an indulgent slice of banana and pecan cake! We sat in the garden just like last time we visited. She sends her best wishes and was mid-blog when I arrived this morning, so we read this entry together. She is amazed at your ability to find your way.

Thanks Conrad
I just take a few snapshots each day for loading onto these pages at 10% resolution.
No sheep were photographed in the taking of that snap! Specsavers?

Hello you two. Great to hear from you and sorry you couldn't join me for part of this walk.
I hope you do get some short breaks from your working summer.
Mentioning the TGO Challenge in the presence of Humphrey is dangerous. Before you know it he will have cajoled you into entering the event. (You'd enjoy it.)
I like the Pyrenees, but 8 weeks every summer would be a bit much even for me!
Have fun
Martin

Yes HMP3 - I've discovered that outside the Terminus Hotel - it didn't seem to have wifi but it did have a Fiesta in full swing outside.
So we've come to a Pension in the upper town. "Very Spanish" commented André as he went back to look for loo roll, soap and hot water. But they do have wifi, so I wasted £3 on data bought outside the Terminus but proved that I can now get it again.

We have a guide book, maps, and other equipment!