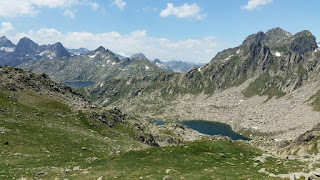 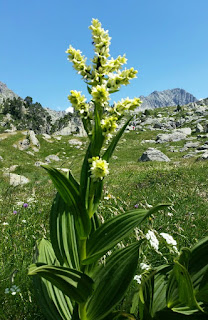 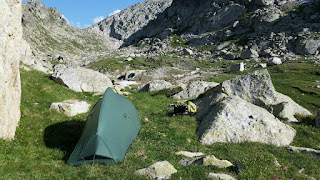 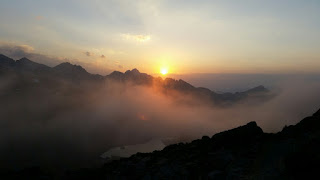 Weather: I can't recall in my lifetime having ever experienced such a spell of hot, sunny settled weather. It's lasted well over three weeks now and shows little sign of changing. The closest that I can remember is a cloudless Easter week in Cornwall in the early 1980's.

What a fantastic mountain day. It's days like this that make it all worthwhile. Last night I was sitting in a sauna in my tent composing the day's diary entry. Tonight I stopped an hour earlier, at 6pm, in this idyllic spot with views up to tomorrow's col in one direction, and expansive views back to my route and over France (where there's cloud) in the other direction. The sun won't leave the tent until 9 ish (9.30 actually). I have a shady rock to sit on and a light breeze is controlling the flies.

I made lots of notes today. Perhaps I'll just reiterate them by way of bullet points.

- missed from yesterday
On the descent through woods, lots of cow wheat and round headed? gentians, as well as the tall green variety of gentian.

My bus ride could perhaps be analogous to a TGO Challenger who plans a route along the road from Cannich to Drumnadrochit and decides he may as well go by taxi.

- passed an elderly Spanish backpacker who asked me the way (I can do that - he followed me all the way to the refuge at Restanca).

- managed nearly 400 metres of ascent before the sun got me.

- blinded by the sun, can't really see the way ahead.

- engulfed by flies at every pause.

- reach Pòrt de Rius, chat to two lads. (It was cooler and breezier there, the end of my fly problems for the day. The lads were marshals for the 'Epic run'. It's 105 km, with about 100 participants who started at 6 am. Pòrt de Rius is 27 km along the route.)

- from late yesterday I've been on our HRP route, but I leave it beyond Lac de Rius (I'll rejoin it later for the stage from Restanca to Colomèrs).

- fabulous views of granite mountain scenery (but fewer flowers in the granite landscape).

- I pause for a rest. There's a stillness in the air, just the sounds of dribbling water, twittering birds and buzzing flies.

- 9 am, early clouds are forming. Is the weather changing? (The answer was no, though tonight some cloud rolled up the valley above which I'm camped, then it rolled back out as the sun went down).

- descend to a spring and take a photo of today's provisions! (Later, perhaps - it didn't make the cut.)

- you weren't expecting this! I'm filmed walking along the path, then I'm interviewed for Spanish TV. My most erudite TV interview ever. Shame nobody will understand a word.

- soon afterwards I pass a sign that indicates I'm roughly half way into stage 23 of this 45 stage walk. And I'm on Day 27 - my train home is on Day 54. All very symmetrical, things must be going to plan.

- lots of people on this beautiful and popular path, many of them intent on climbing to the easy 2833 metre summit of Montardo. After that turn, just a couple of French ladies coming the other way.

- yet more fine views ahead. I'm satiated with them today. It's a good job I like long days in the mountains, they don't get much better than this one.

- pause in the sunshine for another foot wash, then pass the new and the sad old refuges at Colomèrs.

- take my time ascending. There's no hurry. Nobody else around after 5 pm. Arrive at the perfect spot just before 6 o'clock. Perfect timing for a leisurely evening.

That's it really. The sunset was splendid.

Sent from Espot with the first phone signal since yesterday morning. It's a big job catching up with the comments, let alone replying to them. I will try when I get a chance though.

I can't believe the amount of ascent for Saturday! Amedea is correct - you are a 'uomo bionico'! The flower is a false white helleborine. There were orchids on our circuit from Youlgreave today, and we visited the Hermit's cave - don't recall having ever been there before.

Or Hombre Bionico even.

Thanks for the flower info and for the encouragement.
Uomo sawfootio