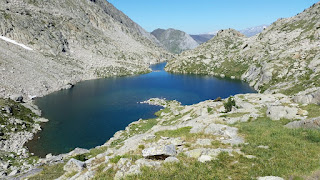 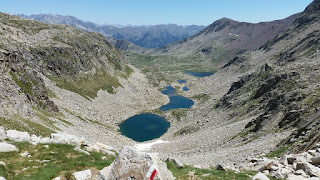 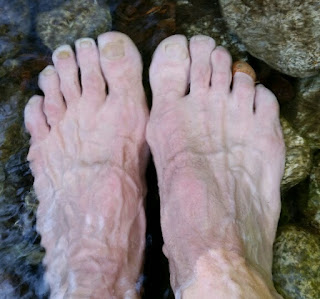 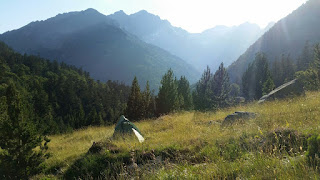 Plus a bus ride of 11 km with 700 metres ascent as far as Puen del Corones, from where the walking statistics start.

Weather: guess what? sunny and hot

Like Tobi and many more before me, I'm a GR11 cheat. On the advice of Humphrey, Brian (the guide book author) and others - namely my own two feet, I caught the 7.15 am bus from more or less outside the hotel for an hour's ride up to 1980 metres. 'The track's a Snore' said HMP3,  'take the bus'. This appears to be perfectly acceptable, as on the excellent E5 route between Verona and Lake Constance.

Others on the bus included the first two English speaking voices I've heard for a while - Rona and Danny, a young Irish couple struggling with very heavy loads. They started from Irun but skipped the hefty section between Candanchu and Benasque in order to meet up with Rona's parents. They were moving very slowly. I don't think I'll see them again.

So, having covered the first three hours of today's route by 8.15, I was able to linger and take my time eating the bag of breakfast the hotel gave me last night together with a flask of coffee that I did drink. I should have looked inside the bag before I set off, as I now have a hotel tea spoon, several packets of sugar and some other goodies that I might have left behind had I known about them. The butter has just gone in my pasta. I examined the poorly feet and applied a plaster where the skin had broken. But with clean socks and Sue's advice, my policy today was one of immersing the feet in cold water every now and then. They are still sore, but holding their own. They were so bad on Wednesday night I thought the trip was in jeopardy; now I know that if it happens again a day's rest should relieve the problem.

What about the walk? Another fine mountain day in the HRP / GR11 style. That is, there were long sections across and up and down boulder fields of the nature that GR10 doesn't encounter. At each end of the walk, long sections through woodland. Humphrey was right about the ascent to Puen del Corones. We had plenty of time to admire what really amounted to the same view all the way up, from the bus, which provided it's own entertainment. First gear was extremely difficult to engage, and I noticed the engine cover would have been flapping had their been any breeze. It's not a route on which to use your newest assets...

The middle section of today's walk, including the boulder hopping, was absolutely glorious. Rocks and lakes in the high Pyrenees.

The high point of the day was reached quite early by way of a good path with occasional rock steps, from where the bus dropped us. An easy 800 metre ascent to a fine viewpoint. There were good views back to Posets, but in contrast to previous days there wasn't any one huge massif in front of us, just five ranges of mountains stretching into the distance ahead.

Soon the half built Refugio de Cap de Llauset came into view. The main structure looks complete, but judging by the response from the Barrabes staff when I enquired as to whether it was open, there's a long story about a disastrous project.

I lunched beside a musical stream - it couldn't decide between Indian music or folk music, but it was a good concert - near the faltered refuge construction before heading up to the next col with a couple of Spaniards. We couldn't understand a word of each other's language until I pointed to one of their ancient ice axes with a wooden shaft - "classic" - "si" they seemed pleased in the same way as I soak up admiration for my old mountain bike.

I was planning to camp by the Anglios lakes, but it was only three o'clock. I couldn't face four hours of frying in the sun. So I continued down into steep woodland on a good path. For four hours, passing Refugi de Conangles. I debated whether to stay there, but with alleged good camping a bit further on, I headed for that.

Brian says there is good water and camping at the start of this ascent. I've found the water - brilliant, I can almost reach out and  collect spring water from the tent. But the wild boar seem to have destroyed all the flat spots. Never mind, I'm comfy and will sleep well with the soothing sound of running water, despite the slight slope.

Interestingly, I'm now back on the HRP route we took in 2004. I think we left Julie to hitch back to civilisation along the main road that runs past the Conangles refuge, after an exciting descent, which I can remember as if it was yesterday, from Collada Mulleres. Happy days.


PS Thanks for the comments. I'll reply sometime when the screen isn't sunblinded!

More beautiful scenery and it sounds as though you've benefited from a rest day. I've looked at potential accommodation in Espot, and hope to book something a little better than the wifi-less Avenida!

The 'dirt track' mentioned in the guide didn't exactly sound enticing - I assume that this is the 'snore track'. Take care of those feet and good luck with the rest of the walk Martin.

I agree with Gibson Take care of those feet! They've got to carry us the rest of the way, Sir! I'm enjoying this too much to let them stop you!
:-)

Thanks everyone. A hotel won't be needed in Espot as all that is needed is a good restaurant for Sunday lunch! And I've found that...

The feet are sore. It's a delicate balance between foot care and making good progress...