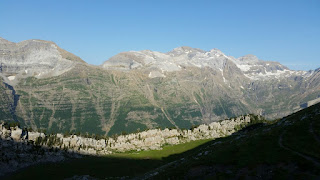 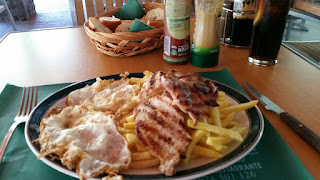 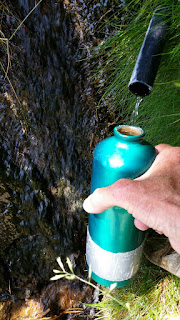 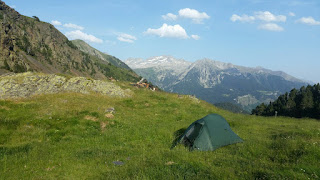 On another cloudless day I managed to pack up before the sun encroached on my shady meadow, and I was away by 8 o'clock.

Despite the statistics it was an easier day, spent mainly on easily graded tracks that were kind to my poorly toes. Just as well they were easily graded. The 1200 metre ascent from Parzán to Collata Chistau took me five hours, during which I stopped for a drink and a rest after each 100 metres of ascent, getting through three litres of water in the process. I'm usually faster and drink less, but with the temperature being nearly 35C in the shade I reckoned best be on the  safe side. Also, camping before the sun goes down brings it's own issues.

Even now at 9 pm, long after the sun went, it's well over 20C in here. I've managed a much needed full wash, but the process of chucking the dirty water out let a cloud of midges in. So I'm relatively clean, but covered in midge bites and sweating like a pig.

This morning's walk was hot but easy. Once over the nearby col, from where the top photo was taken, the path dropped pleasantly down a rock staircase lined with Fairies Thimbles and saxifrages and passing a large family of marmots and a lone horse - perhaps it was his bell I could hear last night - to a dirt road that was followed for a further 13 km down a twisty valley full of conifers, to Parzán.

The village looks fairly new, though apparently it has been a mining centre since at least the 11th century. Sadly it was destroyed in 1936 in the Spanish Civil War and has been rebuilt since then.

I went to the spectacularly good supermarket, bought lunch supplies, then went to the restaurant across the road for a coke. 11.30. Finding open access wifi there, I lingered. Lunch menus came out. I couldn't resist. I also knew that two hours spent outside a nice restaurant might have the edge on two hours spent in a tent under siege from insects, albeit tonight's cloud of midges took me by surprise - it's my first encounter with them on this trip. The ones that got in (hundreds) are slowly being eliminated. Perhaps the weather is to blame; as you might gather I'm spending my nights as high as possible. I'm not up to date with the news, but I suspect I'm not the only one battling with a  heatwave.

When in Parzán, I noticed the line of our HRP route on the map. Sue, Julie and I passed through on our way to Bielsa on 19 August 2004. I don't remember Parzán, but I do remember waiting, dripping, in the church at Bielsa with Julie while Sue scoured the village for the last room for three people. Once the storm had abated, I think it was the day of Julie's kit check whereby the rubbish bin in our room was the receptacle for the excess baggage that was preventing my Phreerunner tent from assuming its rightful place inside her rucksack. Curiously, our HRP route went somewhat south of my route today. I think the HRP route we took (or mis-took) may be harder, featuring 'raspberry rise' and 'the wrong valley', and claiming any items that weren't securely fastened to our rucksacks.

The only walkers I saw today were a few DofE type teenagers on the approach to Parzán. I've seen nobody apart from hydro plant workers this side of Parzán. Mind you, I can think of better things to do than walk up nearly 1200 metres of dirt track on a Monday afternoon!

St John's Wort and a tall blue plant lined the track that goes all the way up past a hydro plant and it's impressive generator building, as far as Ibón d'Ordizeto, a lake that I didn't get to see as I turned off at Collata Chistau. But I did see my first nutcracker of this trip, and a large black squirrel. The water point at 1715 metres (pictured) was extremely welcome.

Even the sections of ascent that shortcut the track to the lake were well constructed, possibly a throwback to the area's history of iron and silver mining dating back many centuries.

The final pull to the 2346 metre col was up steep scree as the well graded path still lay under snow. You could see the different, progressively easier, routes taken as the snow slowly (even in this weather?) melts.

Beyond the col, a bothy that looked in good condition was soon passed. The condition of various bothies I've passed is generally unchanged from Brian Johnson's observations in his 2014 edition of the Cicerone guide. Personally I wouldn't want to stay in them, but they are available (often very small and not very clean).

This bothy had a big male chamois outside. The chap moved away and then eyeballed me for a few minutes, making aggressive barking noises. I moved on.

A pleasant high level traverse eventually brought me to the left turn that took me over boggy ground past a choice of water sources to this excellent site near Barranco Montarruego, about an hour further on from the high col where the track on which I'd spent much of the afternoon was finally abandoned in favour of the narrow mountain paths that are harder on my toes.

Flies supervised the pitching of the tent, later bringing along their midgy friends. I have a good system of cooking etc, involving the tent's midge defence and the use of my arms similar to that in the chemistry lab when we performed dangerous experiments behind a barrier.

I'm not complaining - the system is now working, the temperature is no longer uncomfortable, and I have good views.

If this posting has already appeared it's because I sent it earlier. But it 'sent' much faster than expected with a  weak signal, and I can't spot it having 'arrived'. Sorry for any confusion. I'll blame a blend of altitude and heat!

This all sounds hard going Martin, what with the temperatures, midges, flies and a chamois bully. Your ability to write interesting posts each evening is as impressive as your ability to deal with all the above!

Thanks Gibson, this post landed eventually. I think it was the massive steep descent on which I had to stash my poles that made some of my toes go on strike. You will gather from the absence of 'optional summits' that I am finding the going quite challenging, though you'll see that I took the more scenic route today.

Very impressive lunch. Must of been hell carrying all that.

That's a fabulous camp spot.
I'm really impressed at the quality of your posts, written as they are in your tent after a knackering day!
Superb stuff, Martin!
Are there pictures of your feet at all?

That lunch got me up the hill Alan. It might also be responsible for me having to stop for a drink every few metres!
There are unpublished pictures of my feet. It's quite a difficult angle and requires an obscure yoga posture...