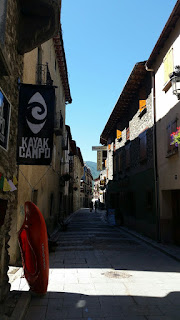 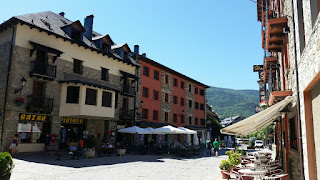 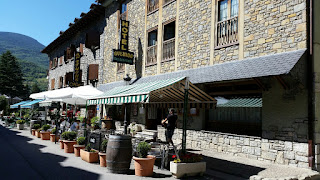 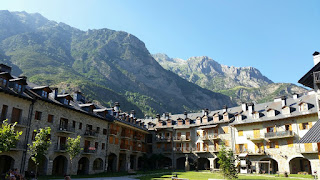 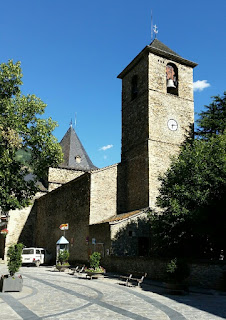 I woke at 8.30 thanks to the shuttered windows.

Breakfast wasn't anything to shout home about and I've no idea how the coffee machine was meant to work. I did get a nice meal last night at Hotel Llibrada though. TV in the background led the news with 'Grexit'.

The day has been spent lazily, mainly in the spacious apartment, planning the next stages, buying too many supplies, and nursing my feet.

I've bought various items that I hope will protect the feet from further damage, but there seems no point in bandaging them until I start walking again. So we'll see what happens tomorrow.

Benasque is a quaint little town with various outdoors shops, including Barrabes, which is a bit like Ellis Brigham's shop in Castlefield. There's a Visitor Information office, but nobody there speaks English. The staff at Barrabes have made up for that and given me the information I need. I think. Perhaps.

I'll be loaded up with all sorts of interesting bars and gels for the next section - stuff I've turned my nose up at in the UK, but with the rare opportunity to buy some proper hill food I took the plunge.

I've had another issue with the phone, which recently gave me a new to me message - 'Device out of memory' and refused to do very much at all. Consequently I've deleted some stuff, most significantly lots of emails and all the music, which I can manage without and reinstall when I get home. After deleting everything I could think of I noticed that the photo 'gallery' is now showing three separate folders - camera (216), download (5) and picasa (25952). So perhaps that's where the problem lies! Why do I need 25952 picasa images on the phone? I've since managed to work out how to stop the sync with Picasa, and I may have removed a sizable 'cache' from the gallery, but I can't see how to remove the Picasa images without also removing the photos I've taken on this trip. There's always something! (Later - clearing the cache seems to have sort of worked as I now have 25951 grey images and a picture of an elephant.)

Yesterday I mentioned my chat with Jean-Luc about the comparison between the three usual walking routes across the Pyrenees.

There's the HRP, Haute Route Pyrenées or Haute Randonée Pyrénéenne, which translates literally as the High Route of the Pyrenees - a high level route that isn't specifically waymarked and isn't a prescribed route, though some publishers, eg Cicerone, have guides that describe one person's take on the route. It was Frenchman Georges Véron who pioneered and defined the HRP. He promoted the climbing of certain peaks as an essential part of the route, and there are a few other notable peaks which aren't far off track. It doesn't necessitate actual climbing at any point, but a head for heights, good navigational sense and some scrambling ability are essential. Depending on the season, luck with the weather and your own route choice, familiarity with an ice axe may also be essential. Sue and I walked a version of this route in 2004 - a superb walk. It's popular, and currently many people will be enjoying their high traverse, spending more time in France than in Spain.

GR10, which we walked in 2013 and which Mick and Gayle are about to embark upon, is a long established and well waymarked route on the French side, whereas GR11 is Spain's more recent answer to GR10, also very well waymarked.

Jean-Luc told me that his son works at an establishment on the GR10 route and reports that during the 'season' around ten to twenty people pass through on GR10 every day.

I didn't realise how quiet in comparison GR11 would be. I had a brief encounter with Mitxel in the Basque country and am still in touch with Tobi, who is about three days ahead of me. I've also met a few folk coming the other way (all these crossings can be done east to west as well as west to east); mostly they have been walking just sections of the route.


I may have started a little early to encounter the main GR11 'traffic'. It'll be interesting to discover how many folk Rosie and her partner encounter two to three weeks behind me.

The weather can vary immensely between GR10 and GR11, with the HRP somewhere in the middle. When in sunny Spain, you can often see cloud spilling over from France. So the GR11 walkers may be in a lather of heat and sun cream, whilst those on GR10 may be under heavy cloud or even enduring a rainy day.

This all means that GR10 brings with it a greater sense of camaraderie than the other routes, especially as there is lots of good 'gite d'étape' accommodation along the way, geared to the needs of the like minded walkers. There is plenty of accommodation along GR11, but little knowledge or understanding of the route.

Today's photos taken around Benasque will hopefully bring back happy memories for Humphrey in particular. The third picture down is taken outside my hotel; the Barrabes store is just out of picture to the left. Music is playing in the background.

A picture of your feet: that's what we need!

I do hope they start to feel better after your rest day.

Sue has that picture Gayle. They feel worse than they look. I'll soldier on bravely across tomorrow's rock fields. You won't have many of then, but you will have a few horse flies. Appropriate repellent may be a good thing to carry.

Benasque looks like a lovely spot for a rest day! Hope the time off helps sort your feet out - there's nothing worse than uncomfortable feet. Until recently I've rarely had any problems, but the last year and this year on the Camino (hard surfaces throughout) have played havoc! I now carry a huge variety of bandages, tape, plasters and wadding to cover all eventualities! :-)

Our bags are packed and a bottle of DEET has been included. I don't particularly like using chemical repellants, but have observed that nasty flying things hate it more than I do, so if needs must...

It's the first time I've had sore feet since the old days when boots needed to be broken in, Jules. And yes, Benasque is a lovely little town in which to have a rest.

Gayle, if it's any comfort to you, we didn't take any insect repellent in 2013, but I wasn't camping until after Luchon.

I sympathise, sore feet are miserable, your rest day is well deserved.
Fabulous trip so far!

Maybe using the cloud for photo storage is the answer.

We will let you know about traffic on the route when we're there! Thanks so much for the answers to our questions before. We have now acquired new sleeping bags and shaved 900gr each off our pack load!

Thank you for your excellent summary of the routes, Sir. As I write comments on preceding days posts you answer them on the following days - this is entirely satisfactory!
And you are taking a day off as well. I think I might have had a few days off after battered feet!
All the best to you in the next few days!
:-)

Thanks for all those further messages.

I don't use Picasa for storage Alan, I use it for photo albums. It just seems that Google wants to put them on all the devices it can find. You have to be very careful with deletions as all the images posted to the blog are in the same place (I think Conrad had a nasty experience related to this. I deleted a 'cache' of over 2Gb, and that seems to have helped to solve the problem without any side effects that I'm aware of! Humphrey has other theories that I'll leave for a time when my brain isn't so overheated.