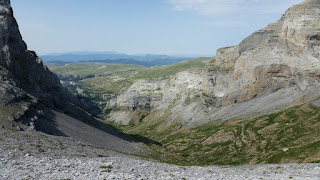 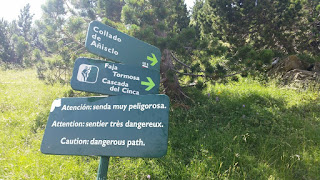 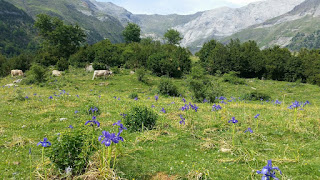 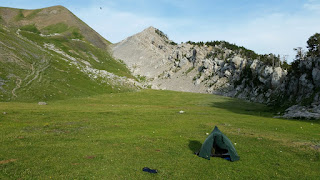 Humphrey warned me about this being a tough day. He was right. The first 6 km took me 6 hours.

I packed up slowly, partly because it went dark last night before I'd finished the diary, so that had to be done this morning.

Nevertheless, the first 250 metres of a steep 550 metre ascent to where I'd have liked to camp were in shade. After that it just got hotter and hotter, and yes I do have blood blisters on the toes of one of my feet. There's a first time for everything! I'm glad I didn't continue up there last night - I'd have arrived too late to appreciate the great spot.

That initial 550 metres took me through an area dominated by black vanilla orchids, alpine asters and edelweiss. Unrelentingly steep through a landscape of rock bands and pretty waterfalls, punctuated with flowery meadows.

I was walking with a posse of harmless but annoying flies towards an area of the grey volcanic rock similar to that which we've been examining from afar during the past week.

A further gentle 50 metre ascent took me to Collata Añisclo (2453 metres). This is the start of, in Humphrey speak, A Monster Descent. So I paused and chatted to some Spaniards who were walking a section of GR11 from east to west. They were debating whether to tackle the balcony route to Góriz. It looked scary, a bit like the lower cycle path in the Brenta Dolomites. Hopefully it is as easy as the latter when you get to the section that looks from a distance like impossibly steep scree.

I also found a phone signal and paid for the privilege of being able to download a couple of messages before losing the signal for the rest of the day.

Yes Tim, I did notice that Paula was running quite fast, such was her desperate need for ... an ice cream...

So yesterday's posting failed to 'send' despite many attempts, which to be fair gave me an excuse to stop frequently on the vertiginous 1200 metre descent to Refugio de Pineto, whose 'wiffi' was not for public use.

I was surprised at the number of people ascending the cliff, given its gradient, but they were mostly day walkers who were happy to do a bit of scrambling without loads on their backs.

At one point an Egyptian vulture floated serenely past, just a few metres away. The thermometer rose into the 30's as I approached the bottom of the valley and the rocks I needed to hold on to got hotter and hotter.

At Rifugio de Pineto I headed indoors for some respite from the heat. A coke went down well. Nobody spoke English. I asked for 'the menu'. This turned out to be the standard lunch of a massive tuna salad followed by two giant sausages, two pork chops and a plate of chips, rounded off by a 'flan'. I spent over an hour on this, but it eventually defeated me. I didn't need much food later on in the tent.

The 'menu' lunch gave me the energy for a hot 3 km road walk to an enticing looking Parador hotel. Then another unrelenting steep ascent, at times requiring care with navigation, brought me up to a bothy at 2100 metres. There were excellent views to the cliff I'd walked down earlier, and to Monte Perdido, whose glacier is reportedly receding. In this heat, I'm not surprised!

The bothy was occupied, with no sign of the occupants other than their line of washing. The meadow in which I'm camped is just a little further along the path. There's some convenient spring water and the ground is flat. But being a cow meadow there are the inevitable flies and mosquitoes. As I arrived, a vulture laboriously flew off, and the marmots and wheatears around here are exceptionally noisy.

It's 20C in the tent, which is now comfortably in the shade.

Today's pictures:
The view back down the Río Bellos canyon from Collata Añisclo
I was too scared to photograph the descent, so here's the sign
Irises in the meadow at La Larri
My campsite at Plana Fonda

Do you mean when you asked for the menu, they thought you were ordering everything on the menu? That's brilliant, respect! Or do they actually have a lunch which is called 'the menu'

Still enjoying your escapades - that's some impressive scenery and walking on show!

I'm looking forward to the next few days' reports - I once went to the French side near Gavarnie / Breche de Roland about 15 years ago, just a few days, but I really enjoyed it, and I've always fancied a look at the Spanish side ever since.

Some lunch. I remember ordering a Spanish omelette and when it came it was 2ft diameter. Enough for 4.

There's a set menu for lunch, on the board at the end of the road I didn't walk down. So when I asked for the menu that's what I got. I wouldn't have been any wiser even if I had seen the board! It was a huge meal. Not often that I'm beaten by quantity.

The scenery is wonderful as ever Jules. The heat is energy sapping.