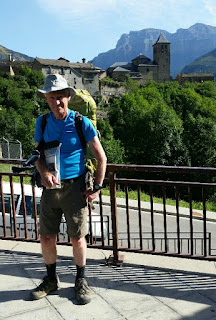 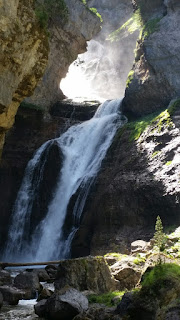 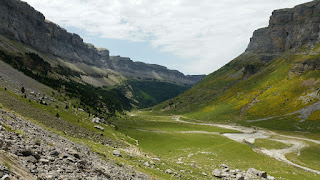 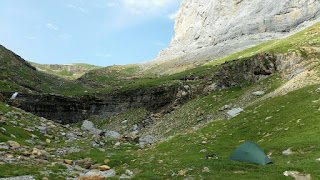 Thankfully the tent is in a deep valley from which the sun withdrew as I pitched camp at 6.30. But it's still hot in here. Perhaps I should have continued a little higher...

It was a shame to have to leave Hotel Sabocos this morning. The staff are great, and we've made some good friends amongst the other guests. Harry and Ann, and Tim and Paula have been especially good company, and we were just getting to know Stephen, a malaria guru, when he left to return to Australia. The Macclesfield crew also deserve a mention - they are a great bunch, and I'd like to thank the Collett's team of Will, Clare, Remy and Claire for their efforts to make everyone's holiday meet their expectations.

Humphrey's vicarious presence also deserves mention, with much good advice and information for my ongoing journey arriving from his dyslexic pen. We regularly toasted you at Beer o'clock HMP3, and we hope your Monster Projects go well.

A last hearty breakfast was followed by a car ride with Sue in the gutless Twingo (a French car seemingly powered by clockwork) to Torla. Sue then returned to a high point en route, for a day walk. I got the last seat on the next bus up to the Ordesa Canyon car park.

So, back to the simple life, with just what I had on my back (I would later regret bringing one superfluous item), as supplemented by purchases along the way, for the next five weeks. Despite a load of extra food brought from the UK by Sue, as well as top ups of tea bags, dried milk, raisins and sultanas, etc, 'The Brick' didn't seem too heavy and I've now returned to my backpacking rhythm. I did leave a few items behind - crampons, ankle gaiters and a few maps - but they didn't amount to more than a few grammes in weight.

Setting off at 10.30, I was amongst numerous folk simply bimbling up the canyon. There was also a handful of people with ice axes, planning on spending tonight at the Góriz refugio then climbing Monte Perdido (3348 metres). It's supposedly an easy climb. But not for me.

For the first few kilometres some respite from the heat was afforded by trees, and iconic waterfalls were passed. Then, at around 1700 metres the canyon opens into a wide meadow with a mare's tail waterfall, Cascada de Caballo at its head. This is the terminus for many people. They were lunching in the sunshine and cooling their feet in the river before heading back down.

The woodland section had been lined with Bladder Campion and Nottingham Catchfly, with Spring Gentians, Moss Campion and bright yellow vetches forming mats of colour higher up. Pyrenean Eryngo, aka Queen of the Alps, loitered more or less everywhere with its distinctive cylindrical flowerhead with a ruff of metallic blue-lilac spikes.

The path was quieter above the mare's tail waterfall. Just a select few were heading up to Refugio Góriz, one of the busiest mountain huts in Spain. I'd been there before and had no desire to repeat the experience. There were over fifty folk lounging outside when I arrived there at 3 o'clock.

I topped up with water and continued on easily to the high point of my day, Collata Arrablo (2343 metres). By now the wonderful canyon views had retired, but the mountain scenery remained superb. A geologist's paradise, I imagine. For me, the pleasure and excitement of being on ground that was new to me, having previously reached Ordesa via the Brêche de Roland or the Ara valley. I was disappointed not to be able to spot the Brêche today.

The descent to the bridge over the Rio Bellos took longer than expected. I stashed my walking poles to make some rock bands easier to negotiate. It was slow going. Edelweiss made its first appearance and clumps of Ramonda sprouted from crevices.

The shepherd's hut near the foot of the climb was occupied by a French lady. I gave her some space and headed down to the bridge. Fancying some cheese, I got out my food bag. It had melted into an oily mess. All my provisions - covered in a thin film of oil from the melted cheese, which I didn't really need anyway. My newly washed fleece/pillow had protected most other things, but after setting out with everything nice and clean, the oily mess wasn't really what I wanted.

Half an hour later, some 200 metres above the bridge, I found a good side stream and a dinky little place for the tent. Not quite as far as planned, but I was ready to stop. It has been 25-30 Centigrade all day and has only dropped below 20C in the tent after 9.30 pm. Still, I'll sleep better here than in a hot hotel room.

Today's pictures:
Setting off from Torla
A canyon waterfall - one of many
The Ordesa Canyon from the approach to Góriz
My temporary home by Rio Bellos

Right then!
I'm on catch-up mode again, a week behind you.
That sounds like a wonderful day. Cheese, Shame, I like cheese, Gromit.
:-)
It does sound like rather hard work lugging a pack up almost 4,500 feet in the blazing sunshine...
Well done Sir!

Cheese. It melts. Gets everywhere. Gave me quite a shock. Especially sad after the sterling efforts of the hotel laundry in Panticosa