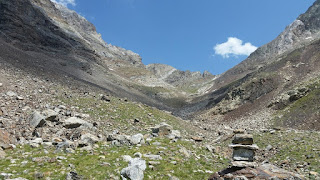 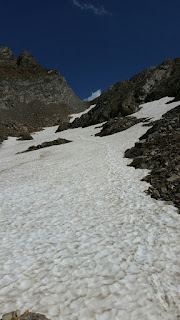 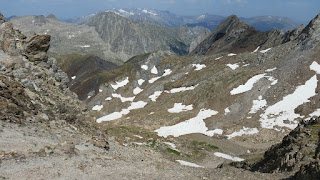 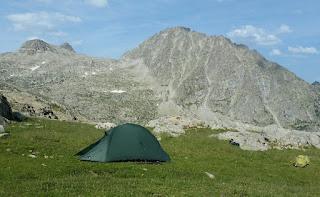 Weather: like the fumes from a witches' cauldron being stirred by the devil

I didn't have that much to eat last night thanks to the huge lunch, but by midnight the chocolate I'd bought had hardened just sufficiently for it to be eatable rather than drinkable, so it had to go before it melted again.

On another cloudless day I braved the midges, waiting for the sun to disperse them but leaving the tent as the sun hit it (fine timing required), and set off on the easy walk to Biadós. Our 2004 HRP team stayed at the campsite here before heading to the north of my route today.

The walk down to Biadós was through cotton grass and great yellow gentians, with the Posets-Maladeta massif blocking the horizon ahead.

I found Refugio de Biadós a little elusive. In the event I stopped for elevenses just below it, eschewing the temptation to find the Refugio and enjoy a cold coke there.

It soon came into view as I walked off in the opposite direction.

I'd decided to take a minor variation on the standard GR11 route and follow the southern section of the Circuito de los Tres Refugios, which circumnavigates the Posets massif and rejoins the standard route tomorrow.

I must be a glutton for punishment. My route climbed about 1300 metres from the low point of the day, up to Collada Eriste, at 2864 metres the highest point of the trip. It was higher than Cuello de Tebarrai, before Panticosa, but easier. Nevertheless the scree was very steep in places and there were some easy snow slopes just below the pass.

Today I didn't need to stop quite so frequently, but with no time pressure I moved pretty slowly. At one point, after a steep slope beyond the distinctive spike of Cantal de Barrau, the guide book suggests heading for the 'obvious col'. To me it wasn't quite so, but the waymarks over the rocky terrain were more than adequate.

There were a few people on today's paths, mostly day walkers. No sign of anyone doing GR11 in my direction.

That's a shame, as encounters with other people are I think necessary to keep this diary interesting.

Moss Campion featured strongly as I strode through the snow today, and a flock of snow finches graced the high point. There was no angry chamois today.

I dropped down into the new vista, finding this place to camp as suggested in the guide book. It would be possible to camp next to the high lake, Ibón Llardaneta, pictured in my guide book as a snow scene. Today there was no snow there, but a massive waterfall coming from the slopes of Posets required a river crossing. Shame about the bandages on my poorly toes. I'll have to improvise tomorrow and restock my first aid kit in Benasque.

Curiously, the outflow from Ibón Llardaneta flows inexplicably south, towards the mountains. Barranco Llardaneta, appears to flow from high up the slopes of Posets, and by-passes the lake by a few metres.

The descent to this excellent site, where I could enjoy a brew in the sunshine without being plagued by insects, passed through an area full of stunning deep blue clumps of Spring Gentians, with some equally stunning Trumpets for good measure. The afternoon brought a few clouds and a light wind, so today was not quite so sweltering, perhaps because I'm a bit higher.

Today's pictures:
The view to the 'obvious col'
Now it's a bit more obvious
The view ahead, from Collada Eriste
Today's campsite at 2470 metres

For what it's worth, I'm still finding the journey (or, more precisely, your account thereof) interesting in the absence of encounters with other people.

Another splendid camp, I see there. In fact, apart from the current combination of big climbs in very high temperatures, it's sounding rather splendid all round.

It is splendid Gayle, but tough. Speaking to Sue just now, she thinks I have pressure sores on my feet. Not nice.

I'll be writing a bit tomorrow comparing the three routes across the Pyrenees, and I wish you and Mick well on GR10. It'll be quite different from my current experience as you are likely to encounter far more people doing the same thing, and the weather will be cooler and cloudier. Have fun, and enjoy the wedding.

I agree with Gayle regarding your posts but I suspect it's the high temperatures which are making it really tough - not that the ascents are inconsiderable! It all looks absolutely magnificent so keep up the good work.

Hi, thanks for writing up your trip, we are really enjoying following your journey!

My partner and I are heading out to the Pyrenees in just over a weeks' time to walk for 4 weeks along the GR11 (Candanchu to Puigcerda) and have been getting kit together. We wondered how heavy your bag is? Also, what season sleeping bag are you using? From your blog it seems it is very hot during the day, but does it get very cold at night? Could we get away with our (lighter) 1-season sleeping bags?

Thanks so much and good luck with the rest of your walking!

Feel free to email with any questions to mobile@topwalks.com

Currently it's hot at night as well. I'm usually sleeping in my silk liner until the early hours, even above 2000 metres, when I get into the Deuter 250 bag. You should be ok with the lighter bags. I used a barely one season bag for the HRP when we did that, and I just needed to sleep with clothes on a few times.

My rucksack is quite heavy - about 15kg, plus or minus some food and water. I do have some luxury items though - phone and camera chargers, Solarmonkey (it works!), Kindle, etc.

That's all for now. Do keep in touch, and good luck on your own jaunt.

I've never walked in such consistently hot conditions. You find things out. Things you never dreamt of getting, like pressure sores if Sue's diagnosis is correct.

Another thing, Rosie. Candanchu is a horrible ski resort, dead when I went through. Tobi went down to Canfranc, which is where Collett's start from when they take guests on GR11. You might consider starting from there.

I agree with Gayle & Gibson; I'm absolutely fascinated by your account, Martin.

I have to say your comments comparing the GR10 to the 11 are interesting - I think the heat would cripple me on the GR11.

I'm sorry to hear about your pressure sores - I had those many years ago in Corsica walking from Calenzana to Propriano through the mountains in Scarpa Bronzos - big leather boots - in August '73. They became less painful after a bottle of wine in the mornings.
:-)

Keep up the excellent writing Sir!