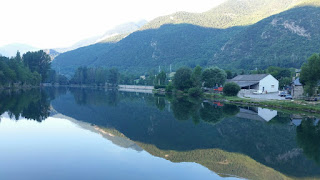 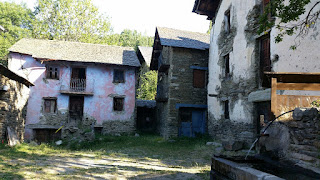 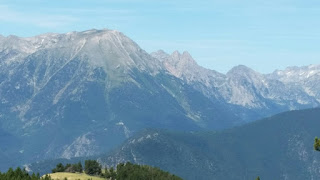 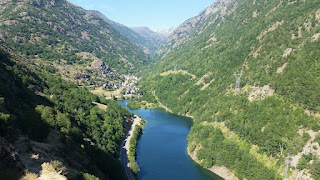 Weather: I could have fried eggs on the rocks

Camping next to a children's playground in Spain. I should have known better. Spanish children play until midnight. And they took delight in tripping over my guy lines.

I didn't hurry this morning. My plan was for a leisurely start and a thrutch up and down to Estaon. That didn't transpire. Instead of a thrutch it was a steady ascent and descent on ancient paths reminiscent of those found on the GR10 route.

I started past the Panta de la Torrassa lake, with fishermen reflected in the still waters, past a machine gun nest built by Franco between 1947 and 1952 as part of his Pyrenean defence line. It seemed quite strange to me, not knowing very much about Spanish history.

The ascent did start off up a fiendishly steep path, but it soon saw sense and assumed a more sensible gradient.

Dorve provided my last water for the morning. By the time I reached Estaon what was left of it tasted like warm bath water. Today's temperatures were around 30 to 35C but with a light breeze it didn't seem too bad.

The hamlet of Dorve was full of incomplete buildings, with nobody around until I heard banging and crashing from one of the buildings. A brown cat appeared and ran off, the only inhabitant.

Guide book writer Brian says this is the easiest place on GR11 to get lost. Not with the new signposting. Just follow the signs to Lo Caubo.

I caught up with a French trio with day sacks at the first col, Collado de la Serra, from where there were views back to what I imagine are the iconic twin peaks of the Parque Nacional de Aigüestortes. Humphrey has alerted me to them as follows:

"By now you'll have passed through the St Maurici National Park, which is probably my favourite region of the range, bar none. The iconic twin peaks – Los Encantados (The Enchanted Ones) have their own legend. It seems that a couple of the boys decided to skip Sunday mass and go off after ibex instead. As a result they got turned to stone."

There were so many mountains and lakes. These two skipped my attention. Sorry HMP3, I'm a failure.

[Just to let you know, I'm writing this under duress. The room I was in had no lights, which I could cope with, then the tap exploded, which I couldn't cope with. I'm now in another, 'normal' sized room. That means it's about eight times bigger than the old one.]

Now then ... an eagle circled over the summit as I walked down towards Estaon and bumped into Martin, who had set off from Hostal Orteu half an hour before me. He was looking very chilled, albeit rather warm in another sort of way.

The long descent brought me to a pretty hamlet (Estaon) with an enticing Refugi recommended by Tobi. I filled up with water and perused the menu. I would have succumbed to any offer, but nobody was around. I'd planned to spend the night here, but it was only 12.45.

I decided to continue to Tavascan.

I'm glad I did. It was a delightful walk along ancient pathways including a spectacular high level traverse at the end of the day. Much care was needed and that section was only very slowly completed.

There was nobody else on the path, and silence apart from twittering songbirds which included a shrike. Butterflies fluttered, oblivious to my presence. The path was lined with clustered bellflowers, harebells, yarrow, crosswort and wild thyme, to name just a few.

On arrival in Tavascan a man advised "You'll need a beer?" Jenny will know the answer to that one. So that's how I was enticed into the chaos that is Casa Feliu.

I wasn't alone. The other Martin turned up after I'd done my chores and a German couple coming along GR11 in the other direction also spent the evening here. The food was ordinary and erratic - the owner kept forgetting to bring things like bread and ice cream. We were promised breakfast at 8 am when we arrived, but now she can't do it until 9 am, and my shoe box of a room had its problems as previously related, causing me to be moved from the dark cubby hole to this more normal room above which someone is rearranging the furniture.

NB It's rumoured that guide book writer Brian is currently on GR10 heading east to west, so Mick and Gayle, who have just started GR10 from Hendaye, may bump into him coming the other way. Apparently he looks a bit like Alan Hardy.

You can read Gayle's excellent reports on their GR10 traverse at http://gayleybird.blogspot.com

She and Mick had a more disrupted night than mine on their first night of wild camping!

Today's pictures:
Early morning by the lake
The distressed village of Dorve
Looking back to Aigüestortes from Collado de la Serra
Tavascan from the high level traverse

I have said that after a week or so it starts to become a way of life and that sense is coming through now in your posts. Looking back on my GR10 I was not blogging then (2003) and had very little contact with friends and family along the way. I can't remember, but I suppose I had some rarely used primitive mobile phone but my journal seems to have no reference to communication by that method, which all added to that feeling of "a way of life".

The simple life, Conrad, plus the excitement of exploding taps and emails from Humphrey...

Great fun, as I sit here on a lovely balcony path resting my feet and going nowhere very fast.

It's good to have your company, I really do feel the cameraderie of my 'virtual' companions.

When we did the HRP in 2004 we sent text messages that my daughter entered on an Internet spreadsheet page, and we sent a postcard almost every day, the contents of which are transcribed onto a Web page in the morass that is topwalks.com. You should find it quite easily.
M

You do me too much honour, Sir.

A couple of phrases in Catalan to give you a giggle:

I am a Racing Snake: Sóc una Serp de Carreres

Very soon you'll be at the De Montfort hut before that gnarly scree slope into Andorra. You'll know this from yr 2004 HRP. A couple of ears ago I camped by the lake and was woken at the hour of the wolf with the magical sight of a herd of horses swimming the lake. (Sorry about that, Conrad! Mary and I love horses, but each to their own!)

What a wonderful sight that must have been Humphrey. Lynne and I both love horses too ... sorry Conrad!

Í tell you the truth, Gibson. For me this was a defining moment in my life. A mighty conjunction of the realm of our perceived experience and the spiritual world.

I see that Mick and Gayle may be in Conrad's corner in the horse debate. I know H & M love them. I've only ridden three times, and I have to say the two horses performed immaculately but the camel farted a lot.

I'm afraid Casa Feliu has gone downhill since you were there HMP3.

I'm going to use the Racing Snake words on the nice people who run Casa Besoli in the morning. We've been communicating by their phrase book and Sue's A4 sheet of phrases.

Coming to this entry almost two weeks late is pure joy - i get to read Martin's excellent account and everyone else's excellent comments as well!
Onwards!