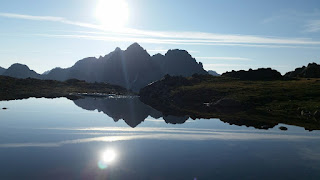 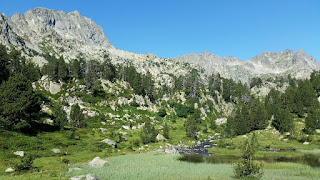 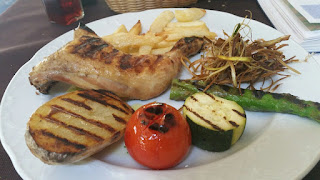 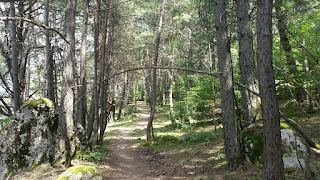 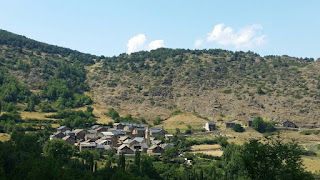 Weather: Guess what? Sunny and Hot, though clouding over a little in the afternoon

I left the idyllic campsite at 7.45 and headed 100 metres up to the broad grassy col - Pòrt de Ratèra. You could camp up there, and the reflections in the small lake where I startled some chamois were stunning.

After that it was a long but easy walk down to Estos (this should read 'Espot'), soon reaching the tree line via a lovely contouring path crossing snow patches, and soon after that the tourist line in the pine clad granite scenery fringing picturesque reservoirs masquerading as natural lakes. Good paths built for Mr and Mrs Fat and their children Fathe and Fatshe made life relatively easy, though at the moment my feet aren't finding anything particularly easy despite frequent cold stream dunkings.

Anyway, paths more reminiscent of country walks than of Pyrenean boulder hopping led gently down to Estos (Espot), where I dived into the first restaurant I came to for an excellent three course dinner.

A couple of hours later I was stumbling along the path to La Guingueta d'Àneu, via the pretty village, and rather more easily said, of Jou.

By now the 'hedgerows' were rather more Cheshire like, with umbellifers, scabiouses, pinks, Eryngo, lady's mantle and broomrapes competing for space in the scrub beside the path.

I had to choose between the Hostal and the campsite. The former looked as if it was the focal point of the fiesta which appears to be going on. So I'm at Nou Camping, next to the children's playground. The sound of them playing, with the siesta-sound backing track will no doubt send me to sleep at some point.

The evening was spent with Martin, a German from near Nuremberg, who set off on GR11 a week or so after me. Hence a short entry. There are others on the route!

Today's pictures:
Early reflections at Pòrt de Ratèra
Looking back on the descent to Estos (Espot)
Sunday lunch (just a bit of it)
Woodland on the path to Jou
The village of Jou

All good stuff. Good job you're not on the GR10. At the rate Mick and Gayle are going they may be catching you up.

Stunning scenery you are travelling through! For the reader, this vicarious walk is almost as good as the real thing (though I would give almost anything to be out there myself, but am having to wait until September for my next mountain fix!).

Keep on keeping those feet in order, though!

Thanks Conrad, and Jules.
I'm just setting off under another blue sky, up the fiendishly steep hill to Dove.

Also, apologies for the errors in this posting. For example, Estos is not Estos at all - it should read 'Espot' - that's where I had lunch yesterday.

And that should read Dorve, not Dove - predictive text is to blame for that.

Hi Martin, at long last I get to catch up on the blog... a very enjoyable if envious read. Take care of the feet, I know you slowed down for me, but you should give the fee a break and you will surely make it intact. Keep the stories coming... Ann sends good wishes for walk.

Hi Harry
Actually I wasn't aware of slowing down for you. We had a great day and it was a pleasure to me to see you enjoying it so much. I really appreciated your company on what has otherwise been a solo walk, virtual friends excepted.
I do hope you and Ann will be able to come to the party I'll arrange in due course.