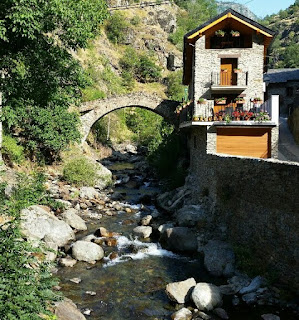 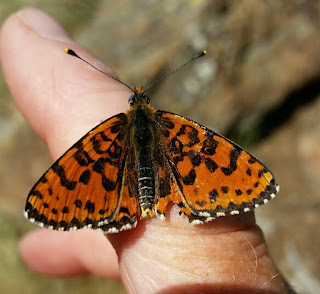 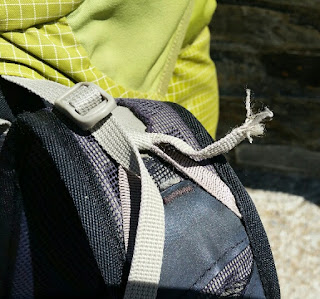 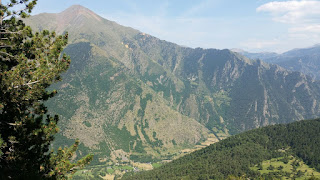 I saw one other walker today, a chap coming along GR11 the other way just above the hamlet of Boldis Subira. He asked me if there was a pub there. "No, the place is completely deserted, but the first water point you come to is the best."

The others were long gone by the time I got my breakfast at 9 am. They must have sorted out an early start whilst I was wrestling with changing rooms, and elephants in the roof. I was glad of the lie in.

Whilst today's walk had its fair share of belvedere or gently graded paths, it also had copious doses of the up and down thrutches I was expecting yesterday. Starting past the old bridge, then across the river - 400 metres of genuine steepness to get to a lovely belvedere path that's the counterpart to yesterday's 'spectacular high level traverse' on the other side of the valley.

The path is a bit crumbly, but wires have been inserted in a few places to make life easier.

I was just pottering along, and stopped for quite a while to commune with a few folk.

- David sadly won't be able to join me after Andorra, so this will be a genuinely solo crossing apart from the excellent day with Harry from Panticosa. I'm still hoping to see David when I finish.

- Conrad, we exchanged comments about 'the simple life'. Ironically, just after that the stitching that anchors the top of one of my rucksack straps to the rucksack gave way. This is fairly fundamental to carrying the load. I've managed a temporary fix but it's a worry. The rucksack came FOC for review, which can now be a cradle to grave review. "Low durability." The only other gear issues that I can think of now are the silk liner that (as usual) has become a tube, and the Pacerpole tips that (as usual) have disappeared up their own backsides.

Humphrey kindly sent me a long message with lots of info about Girona. It sounds like a great place to visit, but perhaps with Sue. I should, feet permitting, finish this trip earlier than planned, but I don't really want to commit to anything other than the train home, and I might even try to change that if it's possible. I'm still referring to a long list of comments that Humphrey sent me ages ago. I should have tried the hotel restaurant here in Àreu, just for the hell of it!

I also caught up with Mick and Gayle's exploits on GR10. They are enjoying better weather than we did in 2013, though I'm not sure how the bloodthirsty basajaun of the Baztan Forest will take to them camping on his patch.

The belvedere ended at the deserted hamlet of Boldis Subira, where I failed to take on enough water. I managed, but what remained of my litre after the col ahead tasted like hot bath water.

Lunch was taken on the corner of a switchback, and I dried out the tent and washed (so that's where the water went!) and bandaged my feet, which looked and felt horrible. The bandaging seems to have worked slightly, and one foot is definitely on the mend.

The forest track was pleasant enough, but the steep ascents and later descents were really quite tiring and hard on the feet.

I startled a deer - red deer sort of size - in the forest, and at the high point of the day, 2243 metre Coll de Tudela, I was surprised to find a caravan and 4WD together with signs about dangerous dogs. They must keep sheep up here, but I didn't see any.

Sore feet took my mind off much else as I steeply and slowly descended 1000 metres to the hamlet of Àreu. Given the heat I opted for the easy life and checked in at Casa Besoli. Sue's crib sheet helped and I established the following - prices are for Rosie's benefit, they are probably similar to Refugio prices.
Room (en suite but no soap) €25
Dinner (cena) 9 pm €15
Breakfast (desayuno) 8 am - €4

There's no bar here, so I went back to a bar for a coke and a beer, and picked up some supplements for wild camping from the well stocked little shop with a friendly proprietor who has a few more words of English than I have of Spanish.


Again for Rosie's benefit, a coke, a beer, two packets of soup and a banana cost €5 in total. But some of the Rifugios charge €3 for a coke.

There's no sign of Martin - perhaps he's at the campsite, nor of the Spanish dad who is doing GR11 in around 36 days with his 12 year old son. They may have gone ahead of me today. Their routine is to get up at 5 am and set off pre-dawn, enjoy a  siesta when they arrive at their destination, then emerge for the evening, before going to bed after 11. So they have two long sleeps each day...

The current Cicerone guide continues to be excellent and seems to be used by all non Spanish nationalities. It's 'The Bible'. But over the past three sections my altimeter has noticed some possible errors. Rosie and her partner may be pleased to hear that the combined ascents of 4600 metres on stages 26 to 28 are overstated by around 800 metres. It's a pleasant surprise, but strangely I found the combined day of 26 and 27 easier than the shorter day 28. Perhaps it was just my feet that found that out...

Another thing, the refuge at Estaon (which I missed) comes highly recommended, as does the slightly off route Refugi d'Amitges on stage 24.

Not much to say about views (hazy) or flowers (unexceptional apart from some giant broomrape specimens) today.

Today's pictures:
The old bridge at Tavascan
This moth/butterfly spent a very happy half hour harvesting my hand
Rucksack problems
The view down to Àreu from below Coll de Tudela

HMP3's book recommendation of The Invisible Guardian is a good one. I couldn't put it down for the last 15% or so, resulting in a late night on Monday, when I finished it. Thanks HMP3! What's your verdict Martin? I hope the descriptions of cold, damp winters on the Atlantic side of the Spanish Pyrenees have helped cool you down.

I could probably manage the two long sleeps a day, but all that 'up and down thrutches' and the heat is best left to others.

I'm up to 35% and finding it most enjoyable bedtime reading. Recommended for everyone except Mick and Gayle, who might be frightened given their current location.
A really good book - I'd be up to 70% if I had two sleeps a day! The 12 year old is amazing. I do wonder why grandad isn't with them though...

Martin, love reading your blog and looking at the amazing photographs. We are jealous in many ways but do not envy the sore feet and blistering heat you are dealing with. Sounds an incredible journey, continue to enjoy it and look forward to seeing you on your return. Jeanette and Paul

Martin, what is a thrutch?

Thanks again for the updates and particularly with prices and the incorrect ascents! Last minute preparations here now and we're getting ready to leave for Bilbao on Saturday, and make our way up to our start by the following Friday. So excited!

Good to hear from you J and P. I hope the cast is off, Jeanette, and you are making progress.

A thrutch is a hard slog up a very steep hill, Harry.

The price with soap was €50 Alan, so I got a good deal, especially as my brick is now lighter having used my own soap.

Rosie - what can I say? Have a great time and do get in touch if you need any help or advice.