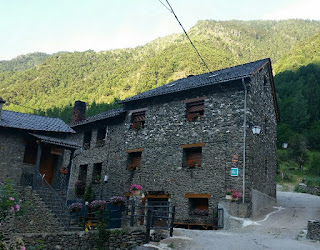 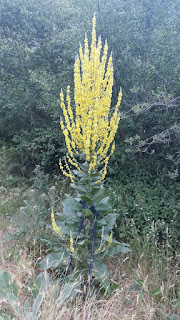 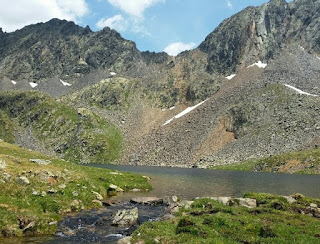 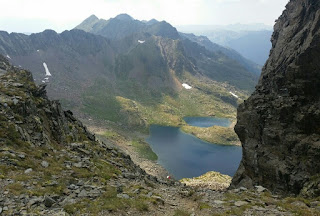 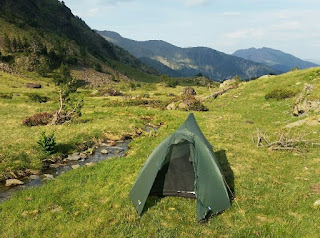 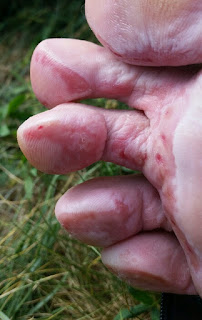 Weather: some high cloud and a very light breeze has made life a little more comfortable today; only 24C at 2300 metres. The weather is finally changing, bringing better walking conditions but probably also some (much needed) rain.

This was another brilliant mountain day once the tree line above Àreu had been cleared. Welcome to Andorra.

But back to last night. Alone in Casa Besoli's dining room I was first brought almost equally large jugs of water and of quite acceptable red wine, plus a basket of bread. Then a massive bowl of noodle soup with a ladle. I ate as much as I could (about a third) before giving up in the interests of saving myself for another course. That was the mixed salad, with lots of olives and some very juicy tomatoes. Whilst I was ploughing through that, a plate of four large sausages in a tomato and onion sauce arrived. It was nice to be able to work on both plates (and read Gayle's blog) at the same time. When those plates had been emptied I was brought another one with a good slice of tasty cheese, and a final plate holding a giant peach. A lovely meal - just a shame I had nobody to share it with...

Sausages seem to be the staple diet in this part of the world. It seems ages since the days of eggs and bacon in the Basque country.

Breakfast was a more spartan affair. It usually is, but I tend not to want very much anyway. In these parts it's basically orange juice and as much toast and jam and tea or coffee as you want.

My sore feet disturbed my sleep again last night, so I bandaged them up this morning and limped off with the usual 'grit' in my shoes. Bizarrely, after 9.5 hours on the trail, the bandages have come off my feet and for the first time in over a week they don't feel excessively sore! The cooler weather may have helped.

It was nice to see something actually going on in Àreu, as most of the small hamlets GR11 passes through seem to be dead. John Deere was mowing a field, and another large field was full of irrigation channels - just for the hay crop. I found all the cows later.

The conditions are obviously suited to mulleins, which were growing up to about ten feet high in the verges.

Before long, tarmac gave way to dirt and that track was left in favour of a lovely woodland trail that reminded me of the best bits of Macclesfield Forest. You had to keep moving to avoid the biting flies though.

After a while I met a couple of gents from Paris coming the other way. They had Enormous rucksacks. They were concerned about camping in the Aigüestortes National Park. Apparently both camping and bivouacing are banned. What we do is technically bivouacing, which is allowed in most places, subject to certain restrictions that aren't an issue (eg you should be at least an hour from a road). But the Aigüestortes people object to anyone sleeping out. Apparently if they catch you - and they have people assigned to that task - it's a €450 fine. That's one reason why I passed through that Park so quickly, albeit taking the risk at Port de Ratèra. [I'm not sure how much truth there is in all this - plenty of people are sleeping out in the Park and I have yet to come across a report of anyone actually being fined.]

Anyway, I ambled on up the path, gently ascending to the cackle of the nutcrackers and the rush of the waterfalls across the valley. After three hours I reached a large car park at the end of the dirt road that GR11 skilfully avoids. That provides easy access to Refugi de Vallferrera, which I had no reason to visit.

So I headed on in stunning mountain scenery, to Pla de Baiau for lunch. On previous HRP visits our route had touched this point but we had entered Andorra via Port de Boet slightly north of the GR11 route. So I'd not previously been up the 'nippy little scree slope' that Humphrey's notes so elegantly describe. But before that - I'd escaped from the woodland flies and had a most relaxing time. I was in no hurry as I planned to camp up at Estanys d'Escorbes where Humphrey had his defining moment with the horses swimming across the lake in the night.

When I got there I disturbed a herd of over twenty izard (like chamois), and the horses were all there in their swimming costumes. And there were hundreds of cows. No wonder they need lots of hay in Àreu!

I wandered around for ages and sat for half an hour in a likely spot absorbing the ambience of the place, but it was only 2.30 and there would certainly be biting insects and marauding cows later.

Nearby is the metal box with nine bunks - Refugi de Baiau. Some, like Tobi, feel compelled to stay there for the experience. I feel compelled not to succumb to that experience, especially when there's a chance of ten students turning up at the door. Which is what would have happened.

So I decided to hop over the Portella de Baiau and into Andorra. I soon met a couple of day walkers, then the ten heavily laden students, some of whom were clearly not happy with life.

Looking back, I'm not surprised. The ascent to the pass was over a large boulder field followed by Really Steep Scree. It wasn't easy. How the students managed to get down without a major incident I don't really know.

The other side of the pass, unlike my scary experience getting into Andorra two years ago, was easy. I descended to a lake where 45 children were playing (so they'll be staying in Refugi de Comapedrosa - I think I'll give that a miss). From there an easy walk took me into Coma Pedrosa, a classic hanging valley. A flat site for the tent was found at 6 pm, but I waited for an hour until the children had gone past before putting the tent up. I didn't want to set a bad example by blatantly ignoring the bivouacing rules, but it probably wouldn't have mattered. Anyway, I was happy on my little rock.

The sun soon dropped behind the mountains, so no overheating occurred.
The usual delicacies have been enjoyed, but tonight I have a real treat. A bar of chocolate I bought in Benasque is finally solid enough to eat! It's delicious, albeit about twice it's original surface area.

Today's pictures:
Casa Besoli
A huge mullein plant - note the walking poles
The view to Portella de Baiau from Estany de Baiau - you can just see the 'path' snaking up the scree
Looking back into Spain from Portella de Baiau
My excellent campsite in the Coma Pedrosa
My not so sore and rapidly repairing (I hope) toes

Back to Index
Posted by Phreerunner at 13:12

Respect! You are making Seriously Good Time, Sir! Coming over the Portella de Baiau in late September 2000 I nearly lost my life - 20cm of fresh snow on an unstable base caused me to fall just before I gained the notch. It's true - everything slows down. A large rock was headed for me, and I twisted so it would hit my thigh - figuring this was the strongest bone in the body. Nothing broke - but I had a sore old time of it gaining the Unpleasant Retail Experience that is Andorra!

Keep up the good work - and do take a rest day in Puigcerda if you're in the humour! Only three sleeps away . . .

Thanks HMP3, I had contemplated getting to Encamp today, but a long lunch and a few spots of rain sees me at 5pm on my balcony at the rather posh Hotel Coma in Ordino. I'm going the whole hog and am steadily emptying the contents of the mini bar. I'll try to make the most of Puigcerda when I get there.

I was glad nobody else was on that scree slope with me yesterday, both for my own safety and also because I shifted quite a large chunk of rock myself...

In the end I was very happy with my decision to go over to a nice cattle free pitch that went into the shade (therefore a bit cooler) early.

That was a mighty fine meal, if your description is anything to go by, but almost enough to be overwhelming.

Trekking down the Pyrenees is not for the faint hearted. Your experience and decision making are standing you in good stead.. Keep up the good work.

Thanks Conrad. It was an excellent meal Jules, produced without a huge amount of effort for their only diner, but one that made you feel welcomed and cared for.

Poor feet! Hope they are not as sore as they look.

The feet (as shown) are much better thanks Jenny, which means that with my mind off them I need to overcome a state of weariness that the sore feet were masking!

My (very) untrained eye thinks that perhaps your shoes are too narrow in the toe box and also that you are slipping forward in them on descents?
The pickling sores between toe and ball suggests overheating. This is all quite miserable, but I am delighted to hear that they are in fact getting better! I am more than delighted that your progress appears super-human and your appetite is to match!
Well blogged and walked, Sir!
:-)

No Alan, they aren't too narrow nor do they slip. The problems started on a very hot day with a massive descent on which poles had to be stashed. So there was around 16 kilos on my back creating quite a bit of pressure and some overheating. Never happened to me before. They are nearly better now though.