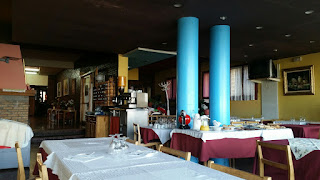 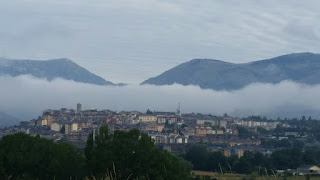 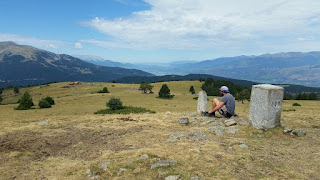 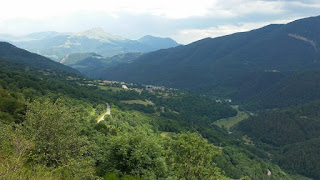 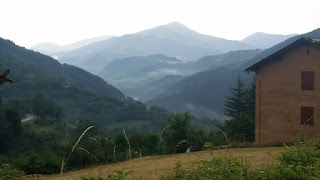 The most significant event of the day was undoubtedly the donning of our waterproofs for the first time in over a month. Only for ten minutes, but it happened; and as I write this the tent is being bombarded with heavy rain for the first time since the first night out of Irun, so far as I can recall.

We can't recommend Hotel Maria Victoria. We slept well but were happy to leave the shambolic cold water port at 8.30 to resume our travels on an ever brightening morning.

Cloud lingered in the valleys but was clearing nicely from the summits after a night of rain as we found our way faultlessly out of Puigcerdà.

It was tarmac all the way through Age to Vilallobent, both 'nothing' villages with sewn up houses used as second homes. But today everyone must have been at their first homes.

After that we ascended mainly on gently graded tracks for a few hours, eventually reaching the French border at border stone number 500. We saw no other walkers today, but around here we met a group of about eight mountain bikers enjoying a day out on tracks that are excellent for that activity, being similar to those in the Basque country.

Lunch was taken at our high point of the day - Coll de la Creu de Meians (2000 metres). At last, the first al fresco lunch I've enjoyed since before Ordino. Cheese, sardines, chocolate, raisins, etc. It was a very comfortable 24C, with none of the flies that had been pestering us on the sweaty ascent. Wide ranging views to wooded hillsides and a few bare summits - rolling hills, albeit high, rather than jagged Alpine peaks.

We then descended through a boggy gully to a track that led all the way down to Dòrria, a smart but not unexpectedly deserted hamlet. Marmots were still whistling and the hedgerows were lined with bellflowers, yarrow, knapweed and mulleins. Thunder boomed in the distance.

Just as we reached the water point at Dòrria, conveniently sheltered - we should have waited for ten minutes, the shower that provided our first rain for over a month rained down.

Below Dòrria, after a slight navigational mishap, we made our way rather more slowly than Brian (the guide book author) who must have fairly run down the path, to this campsite above the village of Planoles. Excellent narrow paths, if rather liberally strewn with the trailing stems of roses and brambles!

Tents were up before we were bombarded by hailstones and persistent rain set in. Derk Jan, Petra and Jolijn turned up and we later joined them for a meal at the Cantine in Planoles. Not as simple as it sounds as it was 200 metres down the hill (and back up it again later) and involved a search for somewhere to eat that wasn't shut. It seems a popular time for local restaurateurs to go on holiday. The food was ok in the 'canteen', and at €51 between five of us the price seemed fair.

Today's pictures:
Our quirky hotel - note the hat stand
Puigcerdà from Age
Lunch at 2000 metres
A view to Planoles
Evening view from Planoles

The views you have posted look rather splendid - a shame about all the ghost-towns.

Welcome back Alan. No, just another week or so, then I'll give you a couple of weeks' break....