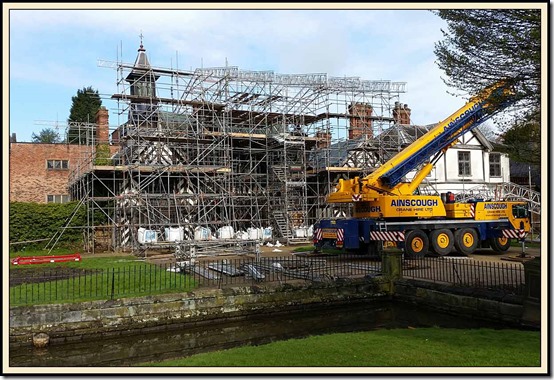 Progress is being made, with a temporary roof apparently being constructed, presumably to protect workers who will be renovating the Hall over the next couple of years.

One of the ‘volunteer duties’ of the parkrun is the writing of a run report. It’s not essential, and Andy usually knocks one off, but as I was leaving the café this week, Jenn asked if I would oblige. So for the benefit of readers unfamiliar with ‘parkrun’, here’s a typical report. The photo at the bottom, of my attempt to chase down the legendary Jackie Cordingley, was taken from the finishing line by Roger Whitehead.

The skeleton of the hall's temporary new roof glinted in a stray sunbeam behind a bright yellow crane as this week's 217 fitness fanatics, mud lovers and insomniacs assembled under Run Director Jenn's watchful eye.
For several participants, this was the first stretch of their legs since last Sunday's London Marathon, in which a number of stunning performances from Wythenshawe parkrunners deserve a mention.

Jason Cundick (4.04) bettered the time he posted in the Manchester Marathon a couple of weeks earlier by over ten minutes. Sub 4 hours next time, Jason?

Mark 'went off too fast' Hunter (3.13) came a magnificent 74th out of 1071 runners in his age group, and stalwart Run Director Andy Holloway just missed out on a sub 3-hour run, fading in the last mile and returning a time of 3.01, coming a more than creditable 131st out of 2346 runners in his age category. Well done Andy, you obviously gave it everything.

This year's Wythenshawe star performer, albeit by a very narrow margin, was Madeleine Hill, who managed a remarkable time of 3.23, coming 127th out of 2490 in her age group. Well done Madeleine.

Dan Martell also deserves a mention: a) for his 2:59:58 Manchester Marathon, but also for cycling between Altrincham FC and Braintree FC in snow and hail and taking in Huntingdon parkrun (18.53 - 3rd position) on the way down whilst the rest of us were slogging through Wythenshawe's 'muddy passage'. Dan was raising money for Prostate Cancer and Altrincham FC.
Back in Wythenshawe, Jenn's amplified vocal chords boomed across the park, imploring everyone to be courteous to other park users, and under 11s to take care of their accompanying adults. Dog owners were, as usual, requested to keep their charges on short leads. (I've noticed a comment about dogs perceived to be getting in the way of runners. It's a potentially difficult issue with over 200 people dashing round the course, but there should be room for everyone and his dog.)
The sun nearly shone as we splashed joyfully around the two lap course. All too soon it was over, shortly before another dousing from the heavens, but not before I'd chatted to Andy W about the Mary Towneley Loop - a 47 mile bike ride which we decided to substitute in a few weeks time for the camaraderie of Wythenshawe parkrun. (See me in the café on Saturday if you want to join us.)

Parkrun HQ provides a plethora of statistics, worshipped by all our Run Directors, so here they are, with a few of my observations.

This week's star of sequence and symmetry, in "pleasing time" corner, is Jo Racle, in position 66 with a time of 25.52. Well done Jo, that must have taken some planning!

This week there were 217 runners, of whom 22 were first timers and 38 recorded new Personal Bests. Representatives of 19 different athletics clubs took part.

That's fewer first timers than in the past couple of weeks, but don't be put off - that's the most mud you'll see until November...

The 19 different athletics clubs are mainly local, but I did spot 'tourists' from London (Steve Gardner), Glasgow (Andrew Cruickshank), Winchester (Iain Cottingham) and notably the Event Director from Little Stoke (Becky Bushnell plus James) fresh from a trying couple of weeks with Stoke Gifford parish council. Greetings all, and we hope you enjoyed your visit.

Talking of enjoying the parkrun experience and camaraderie, runners could do worse than join the already substantial numbers who drift into the nearby Courtyard Café for post run refreshments and a chat. All in all, it does get the weekend off to a most pleasurable start.

Back to the stats from HQ - they reveal that Wythenshawe parkrun started on 6th August 2011, and since then 5,318 different runners, including participants from 316 athletics clubs, have completed 34,656 runs covering a total distance of 173,280 km, and there have been 6,410 new Personal Bests.

There are lots more numbers and sort facilities on the website - it's a haven for statistics geeks.

If everyone volunteered THREE TIMES A YEAR, we would have more than enough. It's fun to do as well.

See you on Saturday and DFYB 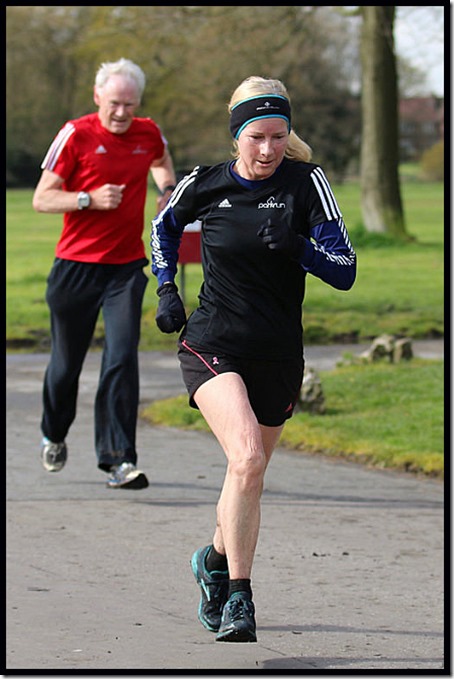