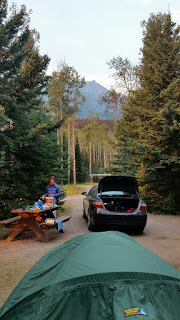 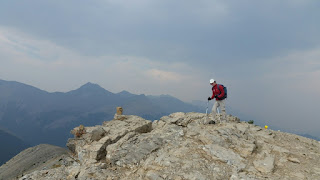 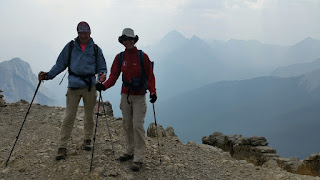 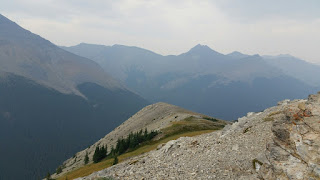 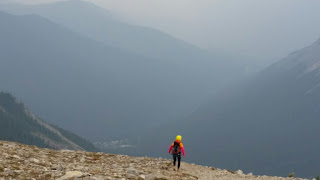 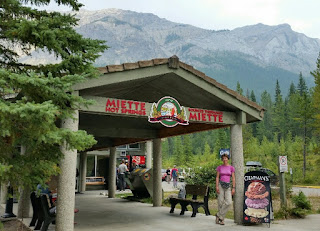 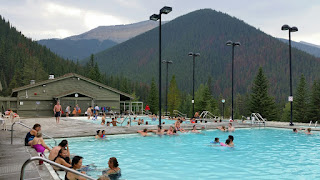 On a cool, cloudy morning we enjoyed a strawberry based camp breakfast (top picture) and a chat with Dot before setting off up Highway 16 and the Miette road - a 65 km journey. We had to leave before 10 am as all the roads around the campsite were being closed to allow the 4-day Tour of Alberta professional cycle race to pass through.

A coffee shop duly obliged at Miette, then we donned boots for the third day running!

The Sulphur Skyline trail is a 4 km path to the 2016 metre summit known as Sulphur Skyline. It's a beautifully graded path through trees, with increasingly frequent glimpses of nearby mountains. Today those mountains were shrouded in the pall of smoke that remains in this entire area.

The last half kilometre to the cool, breezy summit is above the tree line and would sport fine views if you could see them. The second, third and fourth pictures give an idea of the ambience. It was however a very jolly atmosphere up there, with numerous different nationalities competing for the politeness award for taking pictures of other groups and couples.

Back at the tree line we enjoyed lunch on a bench with a view that could have been stupendous, but for the smoke haze. I'd normally take a picture of our lunchtime view. If I had done, it would have been very similar to today's fifth picture, taken nearby as we continued our descent, without the flash of colour provided by the girl in the foreground.

We were back at the car park by 2pm after a very easy descent. Shame about the smoke.

No amount of smoke could detract from our next indulgence, which amounted to two hours in a hot bath in the excellent company of a lovely Czech couple, Eva and Aleš. It was good to meet you two and we hope you stay in touch by email.

The Hotsprings have been commercialised into four different pools, at temperatures of 16, 18, 38 and 40°C respectively. The first would have been too cold for me. The second I ventured into briefly en route between 40°, which I found too hot, and the 38° pool that we all lingered in almost indefinitely. $5 well spent!

Sue then drove us carefully back to Jasper, where we enjoyed burgers and fine beers outside the Jasper Brewing Company's restaurant. TVs blighted the dark interior, so we were delighted to be able to share a table outside with a mother and son from Seattle, and when they had gone we were joined by Dillon, from Saskatchewan, who had spent an exciting day on his own climbing Opal Hill, a nearly 3000 metre summit near the Maligne valley roadhead.

Nothing sinister I'm afraid, Alan. Presumably related to the hotsprings.