Friday 21 December 2018 – An Evening on Shutlingsloe 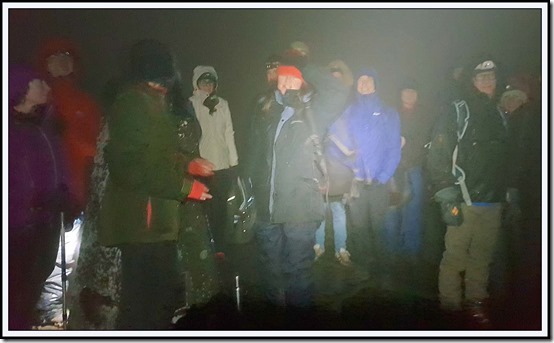 It’s a tradition. The record (perhaps, it seemed like it) turnout was achieved despite a rather poor weather forecast. For once, Sue and I arrived at the Trentabank Car Park 7.30 pm rendezvous point with a few minutes to spare, only to find the place seething with people.

Luckily it wasn’t raining and pleasantries were exchanged in the dark whilst we waited for my nephew Toby, and one of Wythenshawe’s parkrun directors, Charley. Of the 18 people in attendance at least 12 were serial runners at Wythenshawe, where most would be on display in Christmas regalia on the morrow. But that’s another story.

Once we got going – well, after about 100 metres, those of us who had left our waterproofs in our cars were regretting it. As we rose gently through the forest the light drizzle slowly intensified. By the time we reached the summit nearly an hour later, there was no view and the rain was … well, just how you’d imagine it to be at the top of a high hill in the middle of winter.

My attempt to take a group photo failed abysmally (see above), but I did manage a cute picture of Toby and Sue. 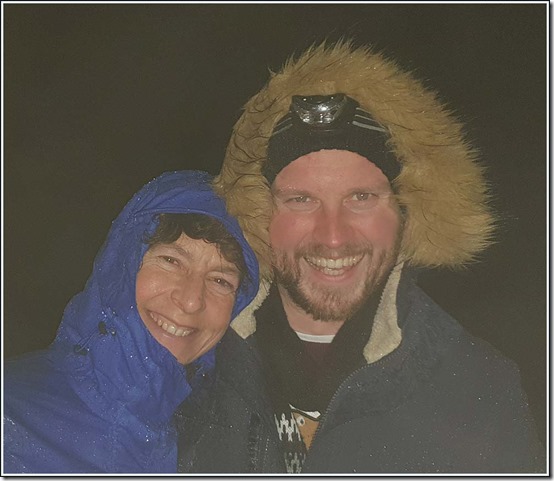 Andrew, Kate and Alice also offered nice smiles, even if Andrew does appear to be resting his eyes. (No red-eye adjustment needed there, then.) 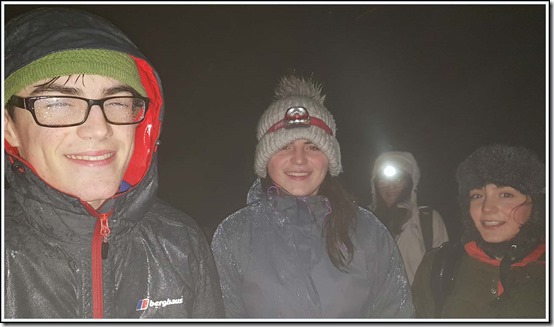 After mulled wine, tea, mince pies, brownies and a sing song on the summit, the weather got the better of us and we dashed back down in about 30 minutes.

Most of us adjourned to the Leather Smithy, where Andrew appeared to be keeping the pub open single handedly. A pleasant time was had by all, as we dried off in front of the roaring fire.

Thanks for coming, everyone – that was a brilliant turn out on a slightly inclement evening.

For the record:
Graham, Gwynneth and Claire
Andy and Kate
Alastair, Hazel, Andrew, Kate and Alice
Me, Sue and Paul
Richard, Diana and Joe
Charley
Toby
Andrew in the pub (one wise man!)