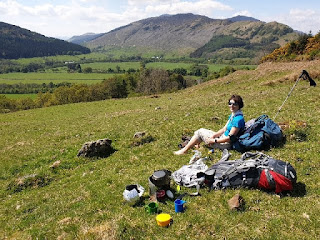 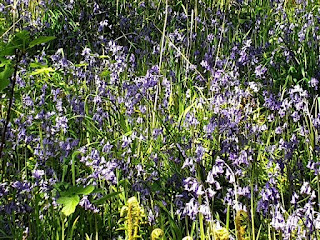 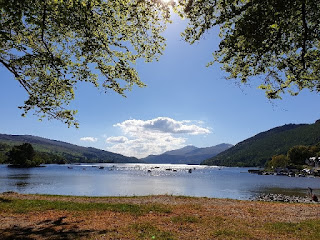 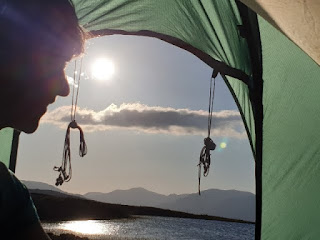 Route: Tempar Burn below Schiehallion to south east of Kenmore - wild camp at 450 metres at NN 802 431

First brew 6.45, away by 8 am - our standard one and a quarter hours without hurrying.

No sign of Sabine on the flanks of Schiehallion, but we were looking directly into the sun. Our route took us along the track to the small shooting hut near or in which Sabine was planning to stay last night. Then a thin path skirted around the mountain and dropped down to some shielings and a rather fine bothy at NN 712 527. It had been left nice and clean by somebody.

We enjoyed a brew beside the track before heading cross country to an unnamed summit at 736 metres. After admiring the views we followed a fence back to the track.

Easy walking along the track ended when we chose to ascend Meall Crumach, 681 metres. We may be in quite a small and select group of Challengers who have braved the peat hags to get up here! Today we saw no other walkers all day, let alone any Challengers.

Anyway, once we were back on the track it was an easy stroll down past marsh marigolds to Fortingall, shortly before which we enjoyed lunch in a fine position overlooking Loch Tay.

Then past posh houses on a lane that had speedwell and water avens in its verges, to the smart village of Fearnan. Here we noticed a memorial to some Russian airmen who died here on 29 May 1943. The memorial is dated 6 May 2019. After Fearnan we found a forest track that provides a pleasant route just above the main A827 road.

The wild flowers were particularly striking here, with huge banks of bluebells, and a track littered with flowers, including broom, bugle, daisies, dandelions, dog violets, greater stitchwort, primroses, ribwort plantain, wood sorrel and yellow pimpernel. A large bird of prey, perhaps a buzzard, was active in the trees.

The forest track eventually comes to an end. To reach the road there's a need to climb over tree roots and all manner of foresty obstacles, but it's worth it. After a short spell on the main road, a sign to the left indicates a short off road route into Kenmore. Another delightful path.

Once in Kenmore, the Courtyard Bar provided plenty of rehydration fluid and cake. That set us up for the 300 metre ascent along a quiet road apart from the warblers, ending a short way along a track, near which we've set up another excellent wild camp. As last time I was here, we got a friendly wave from the gamekeeper when he went past in his 4x4.

Sue has concocted another excellent repast despite being blinded by the sun, and later we will raise a glass to Bernie (RIP), with whom we so much enjoyed working on Control last year.

Today's pictures:
Lunch
Bluebells
Loch Tay at Kenmore
My view as I write this diary entry

I'm afraid that Google seems to have made commenting on the blog particularly difficult for me (and perhaps others) at the moment, so whilst your comments are appreciated, I may not reply. The last time I tried to comment the text just kept disappearing. Thanks, Google!
Posted by Phreerunner at 19:55

I’ve had the same problem commenting on blogs Martin but clearing the cache seems to do the trick. You must have passed through Kenmore today when we were there.

We were there at about 4pm Gibson.
Lovely sunset from our camp tonight.
If this works it's because I went into the website rather than just use the Android summary.

It was a very hot day the last time we were in Kenmore when we were doing the Rob Roy. Lovely walk east from there. Sue seems to be spoiling you food wise, menus please.

Hi Martin and Sue, loving your journal, met you on the 2017 Challenge near Inverness.

It was 2016, Ant. We lingered at Culloden whilst you went out into the rain.

Not much of that this year.

Hope you see you on another Challenge
M&S

That should read 'hope to see you'!