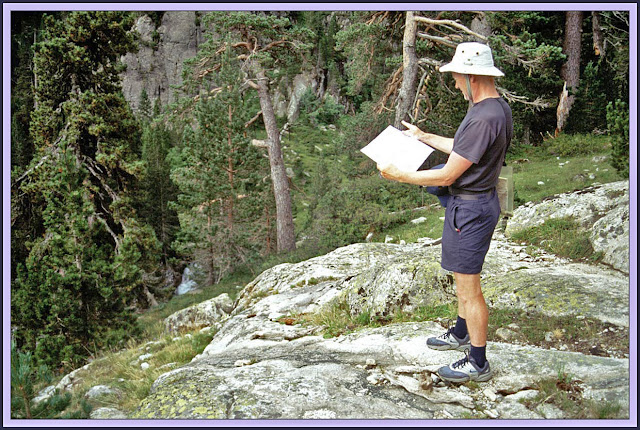 Is that a table mat that Martin's using for navigation? Yes!
Sue and Martin's Big Adventure
Day 18 - Thursday 12 August 2004 - Stage 15 continued
Postcard Summary (on yesterday's card)
Warm flat camp to Cauterets
Lovely morning walk down beautiful valley – 4.3 hours, 13 km, 50m ascent
A stroll past many scenic waterfalls into Cauterets for a re-stocking and washing afternoon.  So we are now very clean and will not be thrown out of the nice Les Estives restaurant for being smelly.

Diary Entry (by Martin)
A rest day. Turned over after the alarm and didn't make tea until 7.40 today.

The mountain tops were in cloud when we left Refuge Wallon at 8.50, our destination Cauterets, a morning stroll (10 miles) away.


It was a lovely walk, always accompanied by the sound of rushing water from the river rushing down the Vallée du Marcadau. In shade to begin with, the sun soon rose.

A fisherman tested his luck, but got his line caught and used his waders in the still deep section to retrieve it. The valley was level in many places, giving wide green spaces. 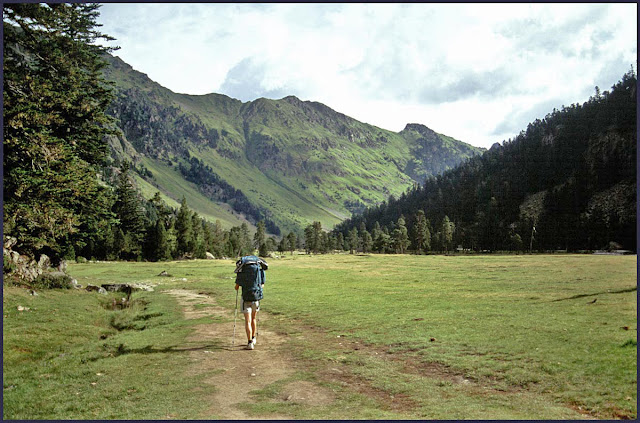 A path runs either side of the river. In the pines, goldcrests twitter. Civilisation was getting closer. At 11am, we reached Pont d'Espagne, a spot where two rivers meet and a very large waterfall cascaded down, dominating the spot. 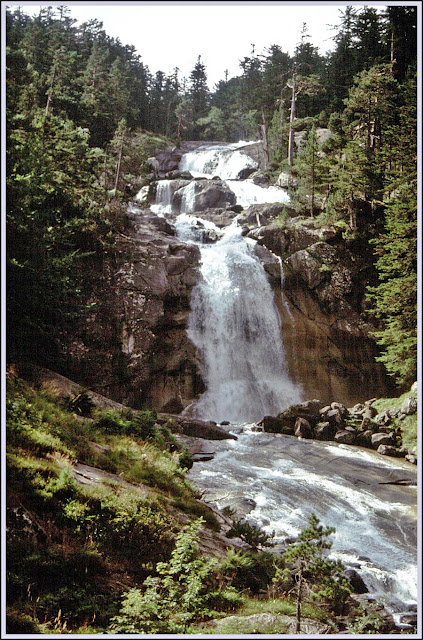 Drank hot chocolate in the sun, and decided to walk the rest of the way to Cauterets (it would have been possible to get a bus down the road) along a wooded path on the opposite bank of the river to the road. It wasn't possible to hear the road at all due to the roar of the water.
The path led to la Raillère, a conglomeration of buildings at a road junction, the biggest of which was the Centre du Rhumatologie. We are in a thermal spring area now, and this was the first sign of that. Rested and had an ice cream before continuing along the path, which brought us right into Cauterets town centre! The shops were shutting, so a quick purchase of baguette and pâté was made - now to find a campsite.
Martin had spotted tents on the hill, so we made off in that direction, joining two other backpackers with the same aim. The reception of the Mamelon Vert campsite was shut until 2.15, so we and Brett and Freddy sat on the grass and ate lunch, ours with a brew. Since our dried milk ran out, tea has been black as we decided not to purchase tubes of condensed milk. After testing tea with Brett's tube we decided our decision had been correct. Too sweet.
Our pitch, shared with Brett and Freddy, was soon strewn with gear. It overlooked the town, beyond which were mountains up the valley. A whole pile of washing was done, and a walking pole was used to construct a washing line that lasted well, until the wind got up!
After showers, shopping for three days' food, that wasn't so successful as at El Bozo in Candanchu, small as it was. After depositing food at the campsite, we went back into town for a beer on the square before dinner. 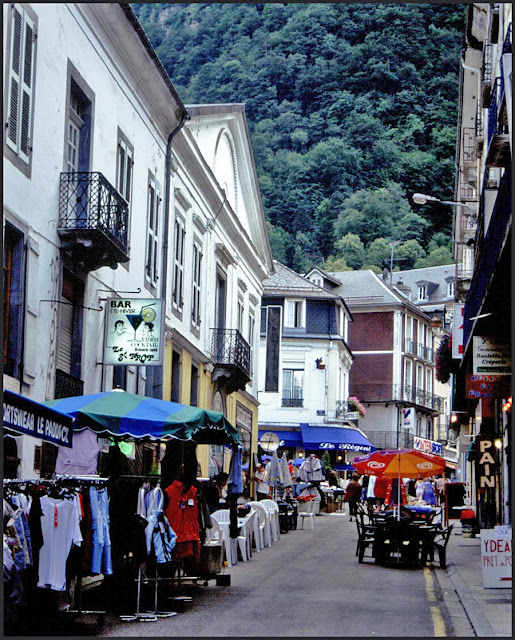 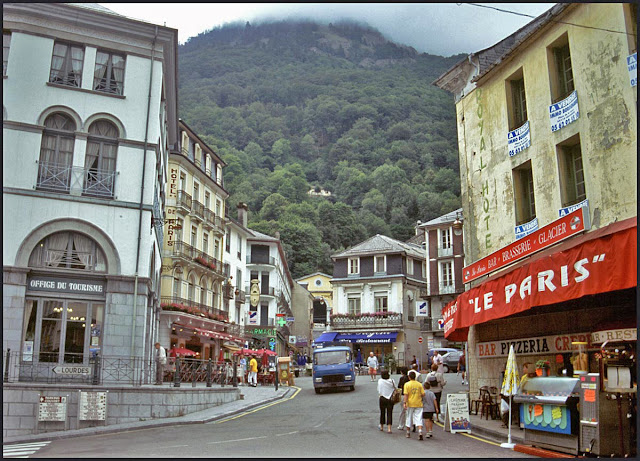 As amazing as it seems, who should stroll across in front of us, but Didier! He was a accosted and sat down for a beer, and proceeded to give us more advice on the route, with interest also in what we'd done since we last saw him. Remarkably, of the six campsites in Cauterets, his campervan is at le Mamelon Vert!
Nice as the beers were (and Edelweiss in a pot on the table), we paid the price, as the restaurant had nearly filled, and it took ages to order and eat. Nice meal though - goats cheese salad and fruits de mer, steak and chips, cheese (no jam here) and a pudding of 'myrtilles' in custard with floating soft meringue.
Crept into our tent at 10.30 pm - a really late night!
Stats and route (Viewranger):
14 km, 200 metres ascent, 4.3 hours 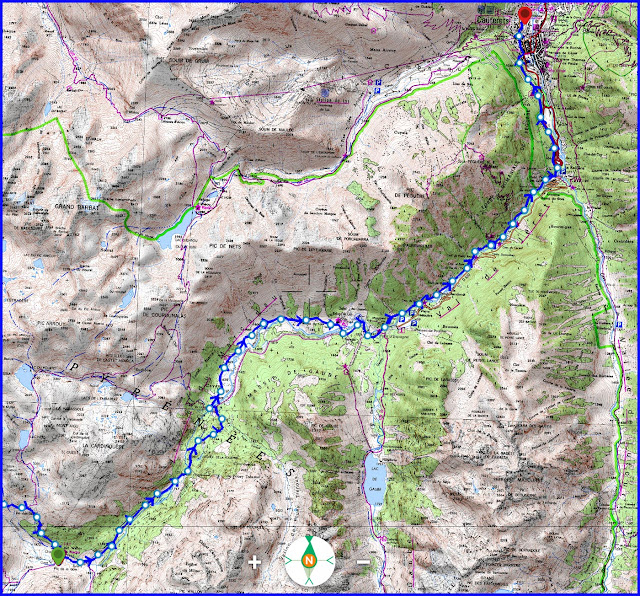 
Next Posting
Previous Posting
Posted by Phreerunner at 22:12

However we think we understand and adapt to the continental long lunch period it is still often frustrating when you are trying to get things done. I was walking for a few days with a fellow English and we took the wrong GR out of Cauteret next morning and walked for an hour in the wrong direction.

That was careless, Conrad!

Opening hours have improved immensely over the years. These days 'Spar' type shops can be found, open, at all reasonable hours, across much of Europe. A far cry from the days when pubs, let alone shops, didn't open on Sundays in Wales and parts of Scotland, and backpacking trips to Europe had to be timed to enable camping gas to be bought before 12 noon on Saturday, otherwise you'd have to wait until Monday morning to get fuel and start walking. We used to fly in to Zurich and race to a known shop before it shut, before getting our onwards train. It was always quite a stressful period until we got the gas.

Whether as a matter of culture or law I don't know, but Germany is still clinging on to Sunday being a day of rest for the workers, with all of the shops being shut. They don't seem to go in for convenience stores either, or not in the places we find ourselves. Fortunately, it's not an issue when touring by motorhome, rather than walking (provided, of course, that we notice what day it is!).

Interesting. I don't think we had that problem in Berlin (our most recent German location).