My 'Christmas Walks' have evolved from being planning sessions for the year ahead into a gathering where we learn of each other's activities from the past year. Having said that, Andrew put me in possession of a weighty tome entitled 'Alta Via Amelia - Spirits of the Dolomites' - which could place our plan to walk the 'Alpe Adria Trail' next year in jeopardy! Thanks Andrew...
24 of us duly gathered outside and inside the Lime Lounge café in Bakewell on a cool but sunny morning. Excellent conditions for walking after a few rather changeable days' weather. It was a shame that Jon had cried off ill, and Andrew would not be joining us until Ashford.
The River Wye was running high, but not dangerously so. (NB Click on any picture for a better version and access to a slideshow.)

After a short stretch alongside the happy ducks in the river, we headed through the town and uphill to the churchyard, and past the imposing spire. 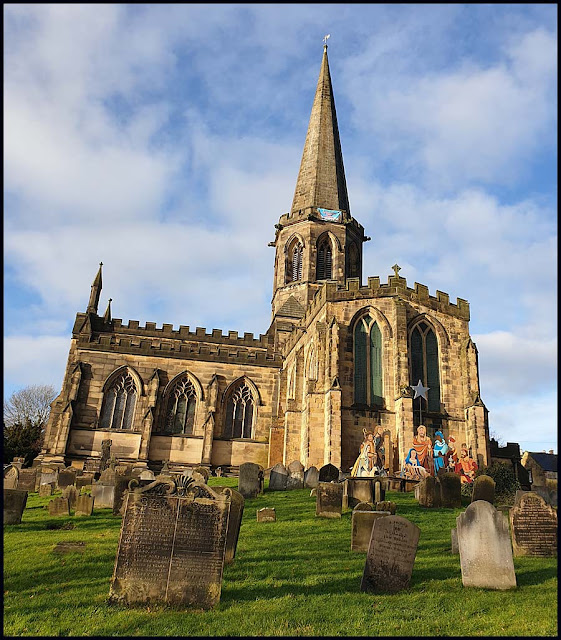 The path undulates (mainly up) all the way to Dirtlow Farm. Today's timings allowed for a leisurely pace. 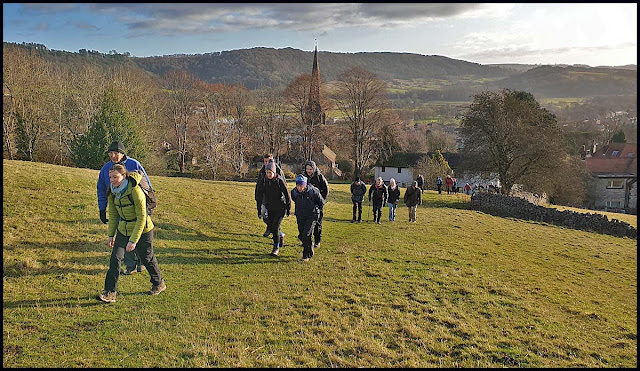 As we progressed, a buzzard flew lazily away from its perch on a gatepost just ahead of us, and flocks of redwings or fieldfares swirled in the fields as we passed by.
Shortly after Dirtlow, our route headed past a communications mast and down towards Ashford in the Water. Sue noticed the time and demanded 'Elevenses', from where there was a good view down to Ashford, and also up the Wye Valley towards Taddington. 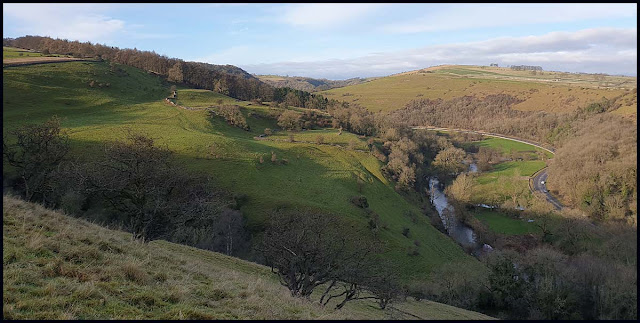 We meandered down to Ashford, where the river was certainly not in meandering mode. The ducks had all gathered in an area of eddying calm beside the bridge. 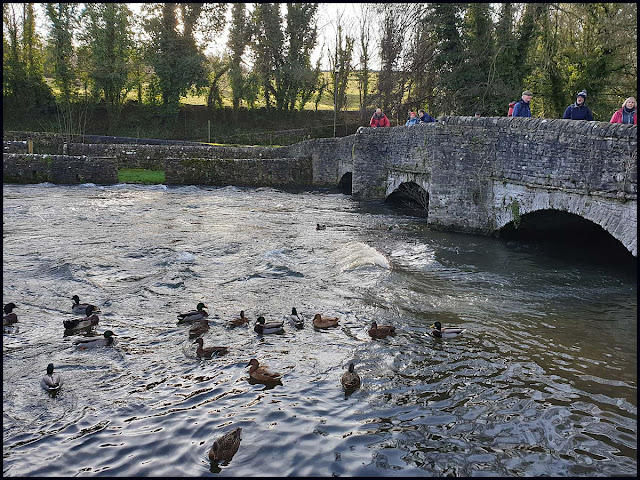 Our path headed past the bandstand (? - Ashford must have a very small band?), and on around the church to the playing field where Andrew was waiting. 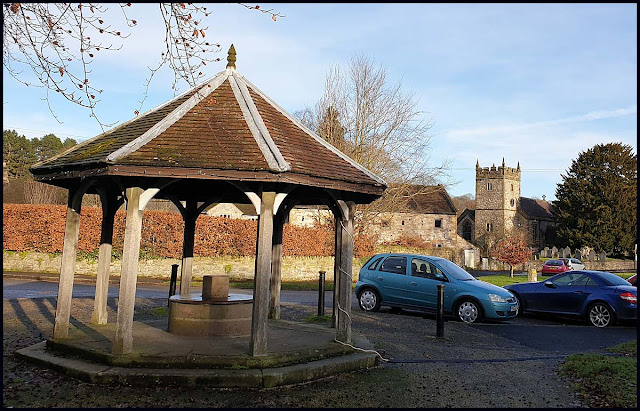 This would have been a good place for elevenses in the bright sunhine, but we'd already had them...
We stopped for a while anyway, whilst many of the party took advantage of the nearby loos. 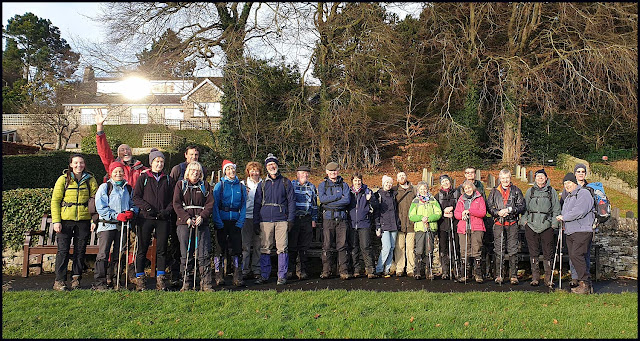 Onwards over damp ground to the Crispin, and an excellent lunch. Some folk also had a go at part of a quiz I'd set for SWOG last Wednesday night - the picture section. I'll put it up on these pages shortly, and as it was designed for people from Stockport, those who tried to answer the questions did very well.
It had been sunny when we entered the pub at 12.30 after a two and a half hour walk. When we left, two and a half hours later, we noticed that it had been raining. It was particularly obvious to those of us who had left our boots outside. 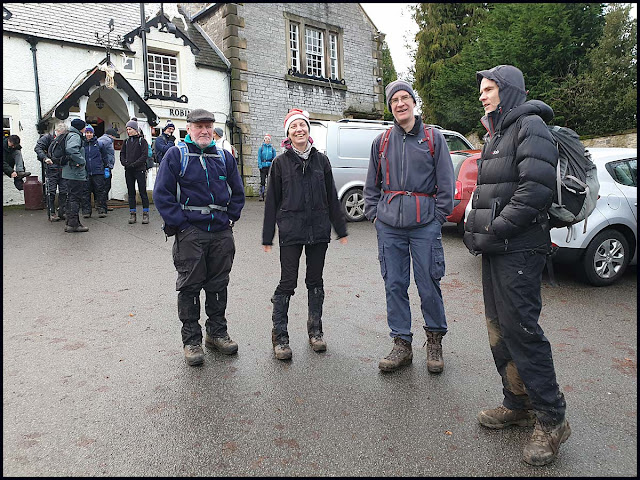 My hat seems to have decided to try to impersonate the church spire in Bakewell... 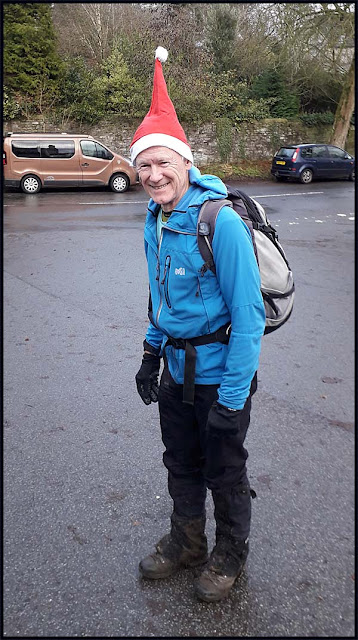 As we crossed the fields towards the Monsal Trail, the light dimmed as dusk approached, and the camera was soon stashed. 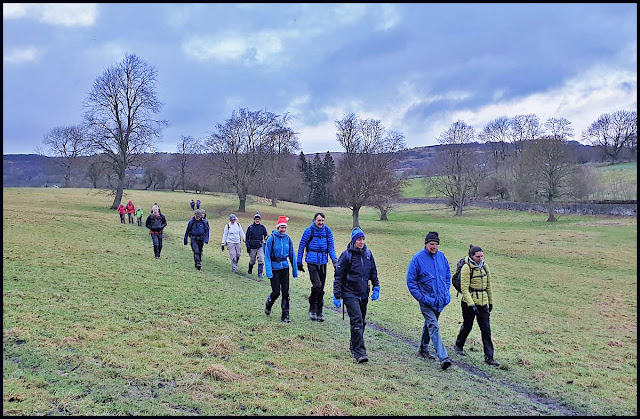 Andrew peeled off to recover his car, and the rest of us enjoyed a convivial time on the easy, broad track, past Hassop and on to Castle Hill. I'd planned to continue to the end of the Monsal Trail at Coombs Road, returning to Bakewell through the fields, as on Wednesday, but the drizzle had turned to steady rain, it was dark, and everyone wanted to go home.
So we did just that.
We walked about 9 km in the morning, and a further 5 km after lunch - the route is shown below. The Crispin did, as they always do, remind me that they are open all year round, and you don't have to spend two and a half hours there - the service is actually very friendly and efficient. 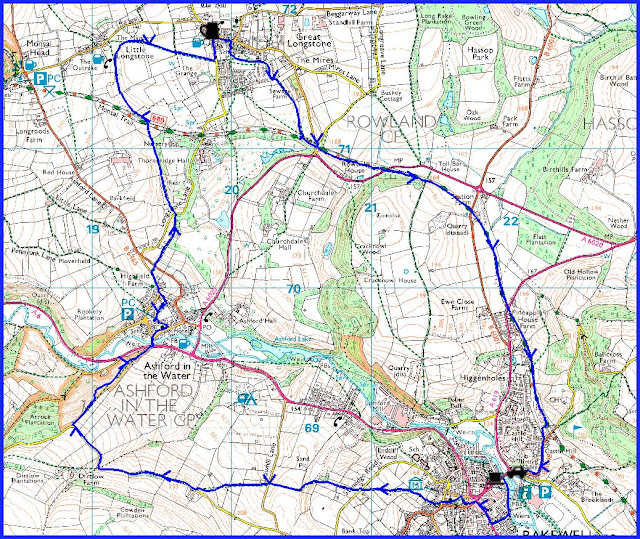 I've added a label to this blog that brings up all the 'Xmas Walks' since the blog started in 2007, should anyone be desperate for a bit of reminiscence. And there's a route description for 2006 here! 2005's route is here. The best I can do digitally for 2004 and earlier is here, but I do have hand written diary entries from 1980! I'm not about to suddenly type them all out, although that might be a fun little project...
Thanks for coming, everyone, and have a great Christmas and New Year.
Posted by Phreerunner at 14:12

With the size of that party it's a wonder you didn't start lapping the tail-enders, especially at the pace I reckon you go at Martin.