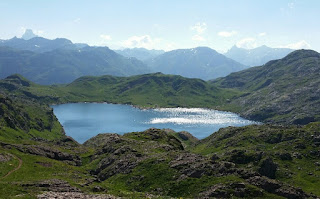 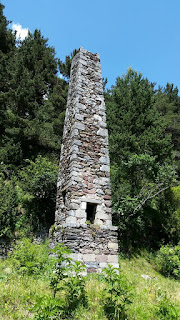 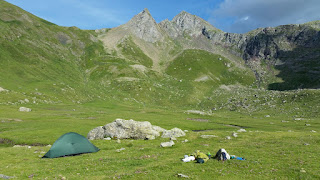 A great mountain day, if a little tiring due to heat and terrain. The stats make it look like a reasonably easy day, but imagine you are in Ardgour and the shop you expected to gain sustenance from was closed.

I'd camped in a place where the cows were distant and there was no sign of them having been there for a while. They made up for that by marching through at 6.30 this morning. No damage though, and I was away by 8 with a wet tent due to a heavy dew.

The sky had cleared overnight, leaving a red hot day, even at around 2000 metres.

It was a beautiful walk through the meadow full of cows and horses, especially now I was fresh. I saw nobody for the first few hours but then quite a few day walkers and a few backpackers, but none doing GR11.

It was relatively easy up to a col at 1909 metres, from where there was a fine view of the Ibón d'Estanés lake, with Pic du Midi d'Ossau beyond.

I paused to take in the view and take advantage of an unexpected phone signal. It was good to hear from Louise, and an honour yesterday to hear that Markus is following the 'gossip'. By that I think he means he's enjoying reading the comments more than the actual diary. So keep them coming folks, though I know you'll all break off for your own holidays at some point.

Gear interlude: Alan was curious about my choice of shoes (Keen Targhee ll). Having failed to break in some new Scarpa boots before the TGO Challenge - I just didn't get round to wearing them - I was faced with using the leaky old Scarpas I used on the Challenge, or these Keen shoes. Not wanting to have to buy a new pair of boots en route - the Scarpas won't do anything like another 800 km - I chose the Keens. The first and fourth days were a bit of a test. The shoes kept out the rain for half both those days and then held up their hands and said "I give up", as did the Sealskinz socks I wore for the same four days, drying them out overnight.

The Keens are certainly better than the trainers I once wore on a ten day trip to a central section of the HRP  (Pyrenean High Route). I had an ankle rub that made boots very uncomfortable for a year or two. Whilst I did carry boots on that trip for some of the scrambling, I do remember struggling up a steep scree slope from an insect ridden campsite at Rioumajou in the trainers. The Keens may not be good on snow, so I have some Grivel Spider crampons with me.

It was a slow job getting down to the lake, a proper mountain path jinking and weaving over and around the numerous bands of rock that barred the way.

Then an easy section with lots of tourists - there's a car park nearby, before taking a narrow path to the right and contouring on a slow but entertaining path towards the magnificent Cirque d'Aspe. The Pyrenees contain many of these huge arcs of mountains bisected by long thin waterfalls, the Cirque de Gavarnie being one of the most famous.

The water in the Gave d'Aspe was pretty low, so there were no wet feet today. I was surprised to hear French voices hereabouts. Then I realised I was in France! I wonder whether GR10 returns the compliment by visiting Spain? I think it does.

The final descent to Candanchu was marred by the sight of a beautiful alpine hillside scarred with ski debris.

Candanchu was a huge disappointment. Completely shut apart from a small café bar with blaring music that I couldn't be bothered to return to after going down to the two Refugios that claim to serve GR11 walkers, only to find 'Cerrado' signs on both doors. Earlier, I'd told Tobi I would wait for him here, but I couldn't face spending the afternoon in such a dreadful place.

So apologies were sent to Tobi and I moved on along the route to Sallent de Gállego, soon being cheered by a lovely narrow path through mixed woodland with flowery verges dominated by Yellow Rattle and contouring around 1450 metres. A tempting sign to Canfranc and it's 'all facilities' was passed. Tempting because I'd been banking on getting a good lunch in Candanchu and after taking that meal from my provisions I was left with a packet of soup and some pasta for dinner and a small packet of biscuits for breakfast. So I hope Sallent will provide tomorrow's lunch!

Before that turn, I'd passed the Anglasé Chimney, the last surviving relic of the mining industry that dates back to the 16th century. The industry now seems to be summer cows and winter tourism, the remains of old buildings used as a factory for making combs, knives and buttons, and an inn for cross-border travellers now having deteriorated into cow sheds. The chimney for some reason reminded me of the one at Jenny Brown's Point near Silverdale.

I later discovered that Tobi (and is Carol still battling on?) had succumbed to Canfranc's temptations.

It was a long, slow pull up to the point where the path finally hauls itself over a final lip onto the Plano d'a Rinconada and into the corrie from which no feasible onward route can be identified.

Having passed hundreds of cows on the way up, I was pleased to find this place free of them. A handy spring and a flat piece of ground was all I needed. I didn't mind the loudly whistling marmots, but the mosquitoes were a pain. They forced me indoors for a semi-comatose sauna until the sun finally went down at around 9 pm, after which all those cows I'd passed slowly re-passed me heading for a snooze in the corrie. At least they were quiet for a few hours before wandering back down the hill in the morning!

Dinner was extensive (it's a big bag of pasta) but exceedingly boring.

Having finally spread real paper maps out over the floor yesterday afternoon, I can confirm that the GR10 does visit Spain, albeit very marginally (or at least, I've not yet noticed a significant foray into the country).

Good to hear from you Robin. Hopefully you'll have some adventures of your own this summer.

Gayle - I bet you're itching to get going and upend a few of your own sheep!

The footwear interest I guess was sparked off by a bad experience of Scarpas I bought for my Macmillan Way and had to ditch after three days. Alan thought you were a Scarpa man. It is a long story on my blog but fortunately I have ended up with a full refund.

Good to see the distant Pic du Midi Ossau. Do you get any nearer to it? I did the circuit and had a great wild camp somewhere on its northern flanks with a thunderstorm in the night.

Your posts are brightening my breakfasts - I'm surprised you are getting good enough signals to send photos as well. What system are you using?

Hi Conrad
The pictures are low res, and I'm simply relying on the Orange/EE phone signal for which £3 buys me up to 50Mb for 24 hours. I think I've used that 8 times so far. Obviously not needed where there's wifi, though in my enthusiasm to linger on top of a mountain this morning means I currently have both. Then it's just an email to Blogger - no special software involved.

I am currently a Scarpa man, but only really because that's what Jose at Alpenstock sticks on my feet. Sue had an interesting incident with Scarpa. The sole started to fall off a worn out pair of boots and they were replaced FOC.
I'm pleased to hear I'm brightening your breakfasts. You must be getting up late!

Have a great weekend everyone.

What a camp! What maps are you using Martin? The ones in the guidebook look OK but I assume you have something better. I won't be missing anything while away - we have free wi-fi!

What a camp! Apart from the mosquitoes and the hot sun. The previous night's insect free spot in the shade was far superior

Maps - I have an old 1:40000 strip map of the whole route. I wouldn't like to have to use it in anger so I'm trying to follow the waymarks and the route description, which is excellent. Mitxel had open source 1:25000 maps on his phone so that's really what I should have done.

Missed you on the Deepest Cheshire walk yesterday evening. We also had a cow incident, but thanks to Sue's impression of Crocodile Dundee (Cow-tamer Banfield?) all was well. Just picking up on your posts after our holiday in France. We thought of you on a walk we did that picked up part of the GR51. Different to the part we did with you, but happy memories of that trip came back to us.
Having a bit of a challenge posting this message with the CAPTCHA by the way, seems to have changed the way you prove you are not a robot, which is fine if you can identify a picture of sushi!

Enjoying reading your blog. I had planned to do the GR11 the same time as you but have had to delay until next year. I'm a little jelous but exited about next year and getting some useful tips from you...cheers

You should be able to pick up 1:50K IGN maps in Sallent de Gallego and/or Panticosa. Published by Rando Editions (Mapa Excursionista). You'll need numbers 24 and 23. You can definitely get the remainder - numbers 22, 21 and 20 in Benasque (Barrabes is the best outdoor store). They may also have number 11 which takes in the extreme eastern section.

Jenny - I forgot to mention my Dog Incident on the French border. I saw a closely grouped bunch of sheep. Flock would be the wrong word. This lot looked like one big woolly jumper, all knitted together. As I walked past, a French Pyrenean Mountain Dog harassed me back over the border into Spain, barking loudly at my heels until I was over the border and heading for the dump (Candanchu).
Glad you enjoyed Cheshire, and France. Sorry about the CAPTCHA and congratulations on decoding it. Maybe that's why Tobi can't post comments - he's fallen victim to an unseen CAPTCHA code.

Steve - hello and good luck for next year. Shame you're not around this year as there are only two of us at present.

HMP3 - thanks for your map advice and for your email re Panticosa. I'll think about the maps next week, but I seem to be managing fine with the strip map at present.

How do you know it was a French sheep dog? Do they bark with a different accent to the Spanish ones?
:-)

It was French. It chased me exactly to the border with Spain then it left me and wagged its tail at a French group.
Anyway, it was wearing a beret.

Isn't the official name for the dog a 'Pyrenean Mountain Dog'? It should be bilingual!

Candanchu is a god-awful dump! I stayed there on the little section I did of the HRP. The only thing missing was tumbleweed...

Oh lord, a dog as well as cows! My worst nightmare, but sounds like you coped admirably!
Re. CAPTCHA - having identified the sushi, I haven't been asked this time. Hurrah!