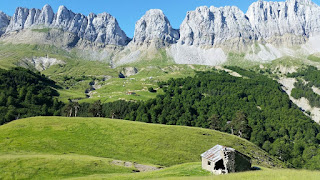 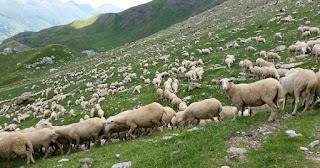 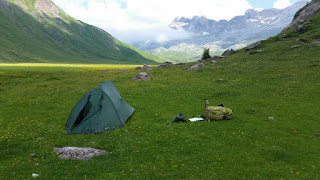 Weather: starting as a Blue Sky Day, hot, with a little cloud cover later; very comfortable at 1600 metres in the shade this evening, but hard work walking in the heat.

Perhaps Ian and Marisa skipped breakfast. They weren't there when I popped in at 8.30 to return my tent tag. They had been keen to do a longish walk to the north east and no doubt wisely started early.

Zuriza would be a good place to visit for a few days. It's a centre for lots of great walks. In a way it's a shame that I am simply scything my way through areas that really warrant more time for exploration.

Anyway, off I went on the track that soon thinned to a narrow waymarked path that wound its way inexorably up an 800 metre ascent to Cuello Petraficha. To my right (and pictured top) were magnificent views towards the Fanes like Sierra d'Alano. On the way, a spring called Fuente Fría was passed. Here the water just wells up from the ground.

I heard barking in the forest, then there were chamois dashing about in all directions. Just to join the party, a few marmots couldn't resist the temptation to make themselves known. Ring ouzels and wheatears were amongst the birds that were monitoring my progress over a lawn of rockroses, squills, spring gentians and a variety of clovers.

Up on the col, a rock like Fat Betty (on the Yorkshire Moors near Ralph's Cross) was the target to aim for - a big block of rock with a globe on top.

Then as I approached, the rock suddenly sprouted legs! It was Jerzy, a Czech living in Germany. Last year he walked from Andorra to Torla, this time he's heading from Sallent to the Atlantic. We chatted for half an hour. I was able to explain to him how not to get lost on Peña Ezkaurri, but he wasn't able to assuage my concerns about getting over Cuello de Tebarrai in a few days time.

He left for Zuriza. I decided to abandon the rucksack and visit the summit of Chipeta Alto, at 2189 metres my highest point yet. It was an easy ascent to a hill that looks impossible from the east. On the way up Orange decided it was time to let me have a phone signal and grab another £3 for a brief internet connection.


So yesterday's diary entry was duly dispatched and I discovered that Humphrey is also concerned about my attempting Cuello de Tebarrai. Thanks for your help, Humphrey.

I soon left the signal to the circling vultures at the summit, descended to the col, and then down to La Mina past a gigantic flock of sheep and goats (pictured centre).

Beyond La Mina I came up here through the Valley of the Cows. My guide book recommends a spot a bit further on, but I can see cows over there so I've stopped well before where they seem to live, in a buttercup meadow near some dolmen and cromlechs. It's a perfect shady pitch (pictured bottom) with all necessary facilities to hand.

On the way up the valley from La Mina I saw more of the black and white 'eagles' that I glimpsed yesterday. There were quite a few and I got a good look. I think they are Egyptian vultures.

Chipeta Alto was rich with bird life. Apart from the big vultures there were ravens, whose summit perch I stole, snow finches and choughs, as well as the statutory LBJs that I can't identify.

I'm now well into proper mountain country, despite all the cows.

Back to Index
Posted by Phreerunner at 09:20

I'm following you as best I can using the guidebook and 'found' your campsite on the map. Wonderful scenery, wildlife everywhere, perfect camping and fine weather. Must be bliss.

Thanks Gibson, and 'hello' Louise...

What awful views. What a terrible campsite. You must be hating this walk ;-)

(Talking of your campsite, at first glance I mistook your backpack for an upside down sheep...)

And I'm off to work, when I'd rather be there with you.... Roll on Monday!

Disguising that dead sheep took a lot of effort Gayle.
It's another sunny day (Friday) with fine views of Pic du Midi d'Ossau from the 2399 metre summit of Punta Espelunziecha.
Have fun everyone....

It's lovely being able to click on full-fat pictures!
Fabulous scenery!
:-)