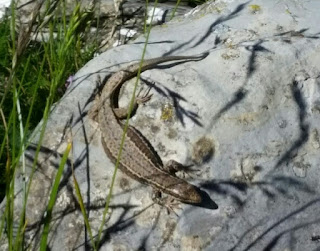 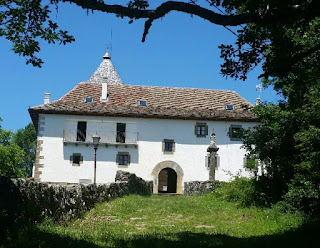 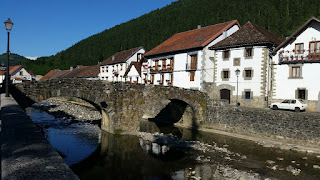 After a perfect sleep I woke to a calm day and a burning sun. It would be a short day so I didn't need to rush off. I lay in just long enough for the condensation to evaporate without me getting fried inside.

I was soon strolling on easy turf on a broad ridge, crossing a road at its highest point before heading along a second broad ridge to the 1492 metre summit of Abodi Occidental Idorrokia. These names are nearly as difficult as some Scottish ones.

It was good to hear from my daughter, and as yesterday, the air seemed to be full of large white butterflies.

I lounged at the summit for half an hour, admiring the views. A panoramic information board at the road had indicated an array of minor summits of not much more than 2000 metres, so whilst they had the aggressive profiles of their big brothers they could only really be regarded as foothills. However, from this high point of the trip so far, something higher had come into view in the distance - Pic Anie - 2507 metres. The massive but distant views of mountains reminded me of those from the Boulevard des Pyrénées in Pau, from where I think Pic du Midi d'Ossau can be seen, but my views today were from the southern aspect and were truly panoramic, with the coastal hills also lurking in the haze on another horizon.

Having seen nobody all morning, I now encountered a gang of seventeen folk (I nearly called them Spaniards but they may deny that). One of them marched right up to me, about to complain that I'd been dazzling him with a piece of reflective metal. This turned out to be the Solarmonkey Adventurer that I'm trying out as a backup phone battery charger. I hope it absorbs energy as well as it reflects sunlight. At the head of the troupe was a strident lady who would march about 100 metres then plunge a flagpole into the ground, uttering some sort of war cry before extracting the pole and repeating the performance. Bemused, I didn't take in the colours on the flag - perhaps green, red and blue. At the back were, for want of a better description, 'Sue and Jenny'. I should have asked them what was going on, but they were preoccupied.

Continuing along the again deserted ridge, the long descent to Ochagavía began gently and gradually steepened, with the orange roofs of the village sparkling in the sunshine five miles and 700 metres down to my south.

Giant puffballs, lizards and wild thyme were all in evidence as I carefully made my way down grassy slopes. My only other encounter of the day was with a local chap out for a few days backpacking from his home. His advice - "take the old route to Zuriza" had the echo of Humphrey's voice and was always my plan.

After some welcome cool and shade from the woodland above Ochagavía, with thankfully not a horse fly in sight, I went over the small summit of Muskilda (1071 metres) on a lovely path before dropping down to some well shaded stone picnic tables. A long pause in this shade was welcome as I knew it would be hotter down at the campsite. It was only 2 pm and my day's walk was nearly over. No need for the separate rest day that I'd planned then?

A wander around the Sanctuario de Muskilda revealed a deserted site with locked buildings, so I was unable to visit the shrine of Our Lady of Muskilda in the restored Romanesque chapel. There's apparently a carved wooden image inside and a festival and pilgrimage every 8th of September to honour the patron saint of Ochagavía. Places such as this (and Gibson can read this in his guide book when it arrives) were once meeting places of covens of wizards and witches. There is evidence that the Salazarese (the local valley) coven met here in 1540, and that the mayor was a participant.

Drawing myself away from this tranquil place, I made my way down past the stations of the cross to the village. It wasn't bustling. It's Sunday. The shops are shut and everything about it points to a 'lazy day'.

I wandered around the village before heading to the campsite. One thing led to another. I stopped at a bar for a drink and inadvertently found myself at the reception desk. A conversation in 'Google translater' then ensued, in the face of considerable amusement on both sides of the counter. I went in for a drink and got a bed, but in a nicer way than when I once ordered a lager in an Austrian mountain hut near which I was camping.

It's nominally a 'hostal', but really it's a Casa Rural or small hotel. For me, it has all the facilities I'd ask of a large hotel, for the price of a B&B. Half board, including the statutory bottle of wine (I only drunk half this time) is €58.

I never did find the campsite, nor did I get more sunburnt - it's brutal out there, not that I'm complaining!

Today's pictures:
An early panorama of 2000 metre peaks to which GR11 slowly progresses
Not a flower this time
The buildings in which the shrine of Our Lady of Muskilda is housed
Ochagavía - the hotel I'm in is just out of picture to the right; the medieval bridge is misnamed 'Pentewan Romanica'

How exciting to see those peaks on the horizon Martin. I'm excited anyway! All that 'free' wine you have to drink must be a bit of a chore though. Never mind, chin up, force it down. I hope the Cicerone guide will arrive today otherwise I'll be struggling to catch up, particularly since we are off to the Lakes for three weeks on Sunday.

Hi Martin, tried to locate your campsite at Ochagavia using Google Earth. Your hotel was quite a way off and I think you did the best thing. I am guessing but the "camping" to me looked like it was wooden bungalow style. There was some grassy areas but there were no tents on the ground anywhere in the area. It was also very close to a sewage treatment plant.
The Ochagarva area looks pleasant as I sped down the roads using street view.

I'm on holiday myself for a week from Sunday Gibson. Have a great time in the Lakes (I know you always do).

I went to suss out the campsite Alan, but the heat got to me and I turned back.

Now on a relatively cool ridge at 1500 metres.

These last two days seem *far* more sensible mileages! I think I may allow an extra couple of weeks on my plans!
:-)