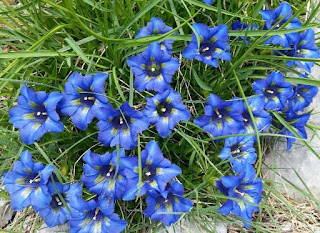 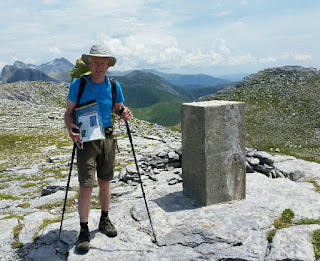 I feel better. After the first true mountain day of the trip I'm outside the bar of the campground at Zuriza with a view of a fine array of mountains, one of which I've come over. There's no phone signal or wifi but I don't really care - at least I'm not aware of anything having broken.

This morning's long lie in, waiting for an 8.30 breakfast, had me wondering whether I should have just set off and skipped breakfast. But no, it was a filling meal that certainly helped me up the 1400 metre climb, and I was here at 4.30 with plenty of time before the restaurant opens at 8 pm.

Last night's minor storm had cleared the air, and the gradients were mostly gentle. Nevertheless the early shade as I exited Isaba along its narrow cobbled streets was most welcome.

Early on, I met a couple of lads coming the other way along the lovely lane lined with pinks and yellow mulleins. Towering mountains ahead to the east thankfully blocked the sun for a while.

Beyond the head of the track, the contours tightened and a steep path led through woods to eventually gain the crest of the hill. Before that, immediately after leaving the track, I'd hopped across the trickle of water that's the Barranco de Beruela. And before that the Barranco de Belabarze had passed unnoticed under a bridge. The latter had foiled my guide book writer's attempt to walk the route in June 2013, when he was unable to cross the river. Meanwhile at that time Sue and I were busy trying to make progress on GR10. This leads me to conclude that this year's conditions are comparatively benign. Mick and Gayle should have no snow problems on GR10, and the total absence of snow on today's hill gives me hope that my own route may be clear of difficulties.

It was a lovely stroll along the broad horseshoe shaped ridge. To my left, cloud was boiling over from France and a herd of sheep and goats was being led towards me by a large white sheepdog. I made my escape, shortly to encounter the shepherd, to whom I confirmed I was heading for Zuriza.

The vultures have gone, replaced briefly today by cawing crows, soon to be replaced themselves by squealing choughs (having a great time by the look of it).

After climbing to the 1769 metre summit of Itoleta o Punta d'Otrazo for lunch, the ongoing route looked obvious. But it wasn't. Instead of heading to the easy angled nose of the whaleback hill in front of me, the path headed past a small lake and straight up the side of the mountain. It was steep. Scrambling was involved. I was all alone in the world. Then the phone bleeped. "Are you in Isaba tonight?" asked Tobi. I proffered my apologies, taking care to tell him exactly where I was (nearly stuck on a nearby hill). Then a chap with a day sack appeared out of nowhere, rushing past and leaving me for dead. He was the only other walker on Peña Ezkaurri today.

Trumpet Gentians were seen in clumps on the ascent - their first appearance on this trip, together with various other newcomers to my growing list.

The summit was crowded with numerous small cairns. At 2047 metres it was my first 2000er of the trip. Fine views, it goes without saying.

I managed to get the other chap to take a quick picture before he rushed off. I'm not sure whether he was happy to have company on the hill.

It was a long way down to the Zuriza campground. That's all there is at Zuriza, apart from a fawn and white eagle that fluttered off just as I arrived. It's a good place though, thanks partly to it being quiet tonight. Excellent facilities and a view a bit like that of the Fanes from Haus Valentin in Badia.

After a couple of beers and a bit of writing I got a big surprise. The first English voice since I started walking over a week ago. Ian and Marisa spend the summer in Bilbao and had come here some 21 years after their last visit. They were excellent company for the evening. Thanks you two for letting me join you.

Today's pictures:
Trumpet Gentians on the ascent of Peña Ezkaurri, and me on the summit.
(Any more might cause transmission problems with a weak signal - you'll just have to imagine the whaleback mountain and the steep route up it I'm afraid.)

Sent from the summit of Chipeta Alto  (2189 metres)

Back to Index
Posted by Phreerunner at 11:52

A bit of scrambling! You could do it at night with a dodgy head torch. Ha.
Lovely day there and here too for a change.
Just an aside, what shoes are you using.

Glad to hear you waited for breakfast. I hate going without but have done so on occasions. On my last walk I found I needed all the time in the day possible to complete my itinerary so early starts have become more important, and breakfast time became a point of negotiation at places where I stayed.

Beautiful clump trumpet gentians! Can't wait to be amongst the flowers too!

Correct, Gibson - Keen Target ll. The only footwear I had that was both broken in and would last the trip.