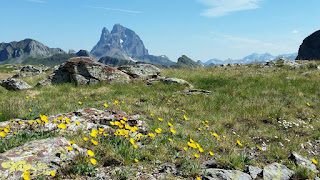 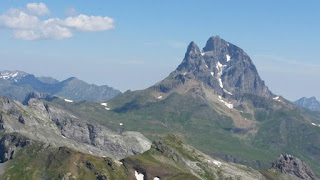 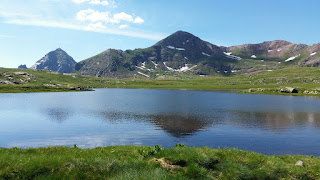 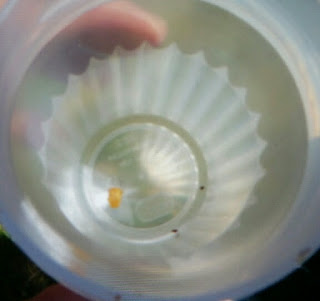 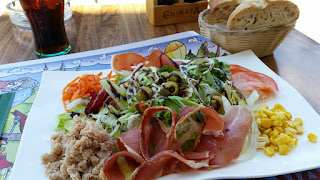 Before I start, Sue might recall yesterday's walk from Ibón d'Estanés to Candanchu. We did it as part of our HRP route on 8/8/2004. Our diary entry will be in the yellow diary in the Pyrenees box.

I managed to avoid the mossies this morning, albeit a leisurely start after finishing yesterday's diary - I can't write after 10 in the tent.
1. It's too dark and my Petzl e-lite doesn't exactly shed a bright beam, and
2. My eyes just shut.

So I wandered up the coire past the few remaining cows that hadn't returned past my tent, and ascended the gently graded 350 metres past meadows of Black Vanilla Orchids to the plateau in which Ibón d'Anayet (a small lake) stands picturesquely. Snap shots taken in this vicinity may have won awards.

Pic du Midi d'Ossau was larger than ever, but that was as large as I would see it on this trip, as I now appeared to have walked past it. To get a better view I couldn't resist dumping The Brick and strolling up a further two hundred metres to the ridgy but easy 2399 metre summit of Punta Espelunziecha. More stupendous views. I spent a while there. On my own as usual.

The long descent to Sallent started well, down an easy path beside Barranco Anayet.  I saw a small snake, about a foot long, perhaps a young adder. It was too quick for me to snap, unlike the ubiquitous Meadow Cranesbill.

Then the ski complex came into view, beyond which I endured the longest stretch of tarmac to date. The ski town of Formigal was by-passed and eventually the waymarks returned for the final half hour into Sallent, which turns out to be a pleasant small town. I arrived at 3 pm, so there's been plenty of R&R time today.

My lunch above the ski complex had been minimal to say the least (a walking pole was needed to gain access to it), so it was great to be able to enjoy a big plate of Aragonase salad in the shade in the centre of town.

The El Reyno hotel booked by Sue had left a key out whilst they enjoyed their siesta, so my chores were easily completed. By 6 pm the supermarket was open and I won't be going hungry in the forseeable future.

A pizza and a few beers with Tobi (Carol decided to bail out in Burguete, but was only ever going to walk part of the way) rounded off the day nicely. It's a shame that Tobi's iPhone isn't amenable to posting comments. I watched him draft one, and watched it vanish as he attempted to post anonymously because he doesn't have a Google ID.

Back to Index
Posted by Phreerunner at 22:18

Try as I might, I can't figure out the first of the two 'lunches' - just exactly what are we looking at in the bottom of this container? Anyway, the salad looks good!

It was a reluctant sultana Nick, extracted with a walking pole. It kept me going for an hour and a half.

It's great to see your progress from a distant view to Pic du Midi on yesterday's post, to much closer views on this post. Pleased to report that today's visit to Shropshire (and Wales briefly) yielded bee orchids, fragrant orchids, pyramidal orchids, common spotted orchids and.... A Ploughman's spikenard! It was an enlightening day.

Hope those cows went passed the tent quietly and didn't leave a calling card. There was a reason I asked you about the shoes but you need to read Conrad's blog to get the gist.

Ah, I know Conrad has had an issue with Scarpas...
The cows did of course leave their calling cards, but thankfully not actually on the tent, which was skilfully positioned behind a rock.

Pic du Midi d'Ossau - I was poring over that area on the map a couple of nights ago with the thought of temporarily abandoning the GR10 around there to take to the HRP instead - a recommendation made by one of my guidebooks. If we do, then I'd like to pre-order some of those blue skies, please...

Recommended Gayle. The HRP in that area would be a good route choice.