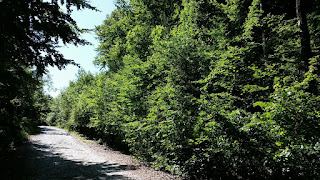 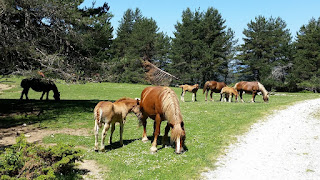 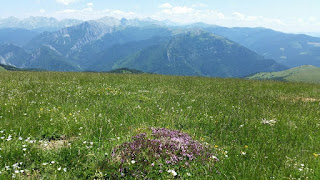 Weather: a blue sky day, with fluffy clouds and humidity in the afternoon

A good breakfast at the hotel set me up for what should have been an easy day. But it was Hot.

The morning was spent on a long track bordered with Yellow Rattle, Hoary Plantain, purple orchids of many persuasions, and much more, that slowly rose about 700 metres, passing at one point an ugly concrete hut that was cool inside and was quite usable as a bothy - it had bunks but no soft furniture - to Collado de Saitsederra (1363 metres).

There had been good views back to yesterday's route, and the way ahead could be seen. But this didn't stop me dumping my sack and nipping up to the 1583 metre summit of Kakueta, my highest point to date. The views from the summit were not unexpectedly extensive. Which is more than can be said for my lunch - just a few raisins as I'd eaten everything else and couldn't be bothered to wait for the supermarket to open.

The brick on my back wasn't excessively heavy anyway.

Back down from the summit, my route left the track and took nice paths all the way to sleepy Isaba. Here, the order of the day is 'Slow Motion'. Otherwise (and even so) you come out in a lather.

I found the place Sue had booked for me. The receptionist speaks some English, which is handy. They don't do food (or anything for that matter) so I must go elsewhere to find that - 8.30 was suggested! When I frowned she simply shrugged and said they eat late in Spain.

There is a supermarket. Not a very good one, but I now have a weighty food bag. I'll be slow on tomorrow's 1400 metre ascent as I also need to take water for the whole day.

My heart isn't really in this tonight, mainly because I have internet problems again and despite strong wifi I can't access emails or internet. When you read this you'll know the problem is relieved, but for how long?

Anyway, a few more random notes from the day:
- I saw three people all day - a man in a jeep and two women in a campervan.
- on the ascent of Kakueta - more giant puffballs and large white orchids, and a lone dead tree, stark against the verdant greenery.
- silhouetted mountains stretching into the distance to the south east, from Kakueta.
- on the final descent to Isaba, a chapel in a poor state of repair, Idoia Dona Marialtea, where I took a long drink from the water-point before descending a fine sunken lane past the statutory stations of the cross (plain grey wooden crosses here) to the village that was hidden from the wooded descent path until the bridge over which the village lies was reached.
- in all the villages, the screech of swifts in the evenings. Just like home.
- my first day without ankle gaiters; nor was there any mud...

Later:
An excellent meal at Hostal Lola, which would be a better place to stay if you don't want to get drenched in a thunderstorm on the way home...
Goats cheese salad
Lamb chops and chips
Ricotta with honey and sugar
Rosé wine (I've decided etiquette dictates that I should only drink about half the bottle)
Coffee
I also discovered the better supermarket (after 8pm so shut) that I'd not found when shopping because that section of road was blocked by a crane. Never mind, I'm stuck with biscuits for breakfast for three days after tomorrow.

Today's pictures:
A view of the track on which I spent much of the day.
Some Basque horses. Before I leave the region I thought I'd better record a sight that is commonplace on both sides of the border during the first week of any Pyrenean traverse.
The view ahead, from the summit of Kakueta

You need to buy one of those Spanish leather wine carriers for the other half bottle. Your hostal looks good for tonight.

Toby had one of those Alan. He reckons it was the carrier that made him sick, not the wine!

Any vague plans I might have had to do the GR11 are being burnt off by the temperatures you're enduring. Still it's fun following you now that the guidebook has arrived Martin.

Dot has asked me to tell you how much she is enjoying your postings and how she looks forward to reading them each morning. I spent a very pleasant 40 minutes with her last night on my way home. Shame it couldn't be longer.

Excellent progress! You’ll soon be in the high mountains – here are a couple of links which may be useful. They’re in Spanish, but you’ll figure them out . . .

Snow conditions
I’m concerned about the extent of the snowfield below the Cuello de Tabarrai which you have to negotiate after Refugio de Respomuso. I’ve been monitoring their webcam and currently the snowfield appears to start at around 2300m. From here there is a very steep 500m climb to the narrow pass. I was there in October ’99, when it was largely free of snow. Frankly under current conditions I’d not attempt this climb without ice-axe and crampons. Your crux point is Sallent de Gallego.

The camera is pointed directly at the Cuello de Tabarri, which is just to the left of the right-most peak (Tebarray).

The current conditions (max/Min temp, etc) are in the extreme left-hand column.

Forgot to say that for anyone reading on a PC right-mouse-click on these links brings up a dialogue giving the option to open them in a new window.

Thanks HMP3 I'm on the case - may need another route from Sallent to Panticosa - any suggestions?

Comment sent from the top of Chipeta Alto - the only place around here with a signal ....

There are two options. To Panticosa (the town, not Banos de Panticosa, 8km up the valley,which is where the GR11 comes in

First is to take the Sallent de Gallego > Jaca bus and get off at Escarilla (ten minutes, saves you a horrid road-walk, Escarilla is the first stop after the tunnel). Then walk 700m south then take minor road on left to Panticosa. Bear left after 800m after leaving the woods and continue to Panticosa (2km) . Buses leave from the junction of Calle Juan de Lanuza and Calle de Francia, 50m east of the Hotel Balaitus (check with Tourist Information, Plaza del Valle de Tena). Departure times are Mon/Fri 07:45 and 16:00. Sunday 16:00. About a ten-minute journey. Bus company is called Avanza.

Second is all walking. Take the Camino de la Escararilla south out of Sallent to gain the north shore of the Embalse de Lanusa reservoir. Follow this minor road through the hamlet of Lanuza. At the end of the reservoir take a track on your left at a hairpin. After 200m take the track on your right. This leads you around the south side of Cucuraza on the 1500m contour and brings you into Panticosa after some 5km.

Good to see that the Support Crew is in Fine Fettle!
:-)

Belated thanks, HMP3 (aka Support Crew). This info would have been very helpful had I needed it.