Monday 1 October 2007 - A Walk from Home - The Altrincham Circular 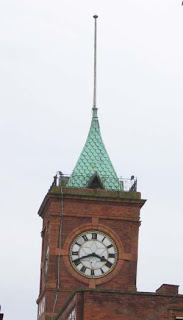 Today is the fourth anniversary of my leaving full time employment. It is time perhaps for me to try to keep up with this blogging aspect of our technological era, on a more consistent basis than previously adopted in the Pyrenees in 2004 and on the TGO Challenge earlier this year.
In the past I have celebrated this day with a whizz around the Snowdon Horseshoe, but today the weather forecast and transport considerations drew me back to a walk devised in 1987 as a WEA (Workers’ Educational Association) project. It’s a 31 km circular stroll along old byways and footpaths in south Manchester. Its attraction to me is that it passes by the end of our road, so it takes me 2 minutes to join the route, as opposed to 2 hours to get to Pen y Pas. On this second walking of the route (the first was five years ago) I spent a while marking up the guide book for changes that have occurred since the walk was devised some 20 years ago, but time was not an issue. I was also delayed, whilst admiring the unusual clock tower of the C19 Linotype Works by the Bridgewater Canal in Altrincham, by a call from ‘work’ (I still do a bit for them) with a query on something I dealt with in 2001!
I’ve concluded that:
1. Apart from a couple of new housing developments, where the old field paths have been preserved in the form of cinder walkways, the past 20 years have brought very little change really. Some of the big old houses have been redeveloped, and security gates have been added to them, some stiles have rotted away, others have been renewed; rubbish levels are largely unchanged apart from dog manure which most people now seem to dispose of in the receptacles provided – I didn’t notice any on the paths.
2. Golf is a more popular weekday activity than walking. The two courses I passed through were simply heaving with people, whilst on the paths I was walking I encountered just a few of those tidy dog walkers and a lone jogger.